The Garden Room is characterised by an ostentatiously verdurous wallpaper, in keeping with its giving out directly into the club’s courtyard garden. ‘Intensity’ starts from that point and from the growing view that plants -  as is made evident by the threat of global warming - deserve more recognition, philosophically and environmentally, than they have historically received.

That is in line with Emanuele Coccia’s argument in his recent book La Vie des Plantes (2016). After all, plants are the agents which produce the atmospheric oxygen necessary to human and animal life. Moreover, it is only plants which can exploit the primary source of energy available on earth: it is their transformation of sunshine into stored biomass which provides the basis for animal development.  Coccia also praises their lifelong growth; their ability to bridge the aerial and subterranean worlds, mediating agent between earth and sky; the variation and seduction of flowers; and even their communal sexual life - as ‘with animals, sex normally takes place between two individuals of the same species. Whereas with plants, sex is a cosmic event. It makes use of other animals, bees, meteorological agents, like rain and wind. It’s a beautiful thing that to have sex, plants need more than two individuals. They need a whole world'.

That may not sound directly relevant to art, but Coccia also says that 'plants have no hands with which to manipulate the world, and yet it would be difficult to find defter agents for the construction of forms'. He explains that the seed is traditionally a form of rationality, as it exemplifies a force able to draw forth incredible forms from matter. In his words ‘matter itself seeks, invents, produces its forms of life and rationality simultaneously. And the force that allows this was often called artistic force. In Greek, there is only one word for art, technique, and reason’.

The six artists here don’t illustrate Coccia’s text, but all have made works which refer – directly or indirectly – to the botanic. Three make works which look abstract, but which introduce organic forms, rhythms and references into apparently mechanic and geometric processes in which labour and repetition are prominent. The other three use figuration drawn from a broad spread of culturally significant sources to set up parallels between human and vegetal activity. All six bring a particular intensity of focus and labour to the small formats  required by the space. 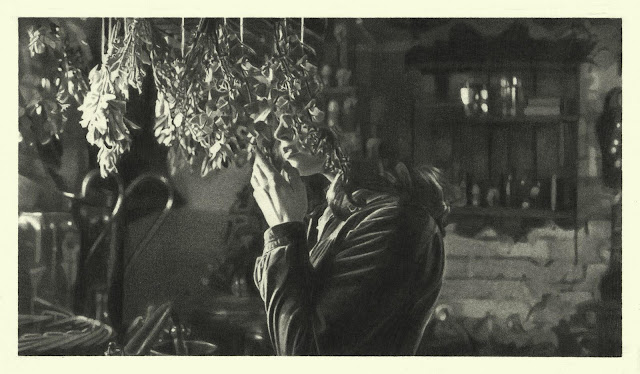 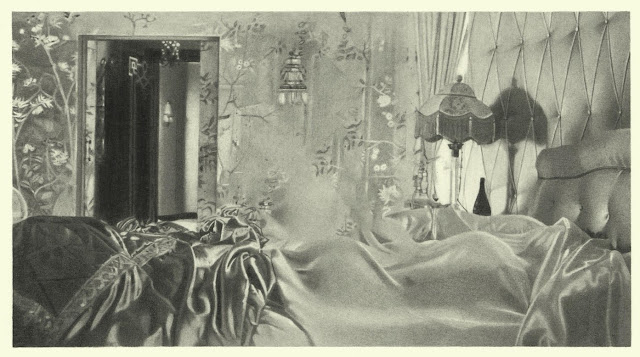 Marie Harnett brings an intense focus to film stills, from which she makes intricate pencil drawings which imply the wider narrative arcs connected to  fleeting moments of drama, beauty and suspense she selects. These drawings add a further twist by subjugating the human to the floral: Flowers extends the dried flowers hanging from the ceiling in the original still to replace part of the face of the person seen; Room 2 blurs the figure now merely suggested on the bed  to shift the focus towards the flower pattern on the wallpaper. In cinematic terms there's just a hint of the vegetal menace of 'Day of the Triffids'. 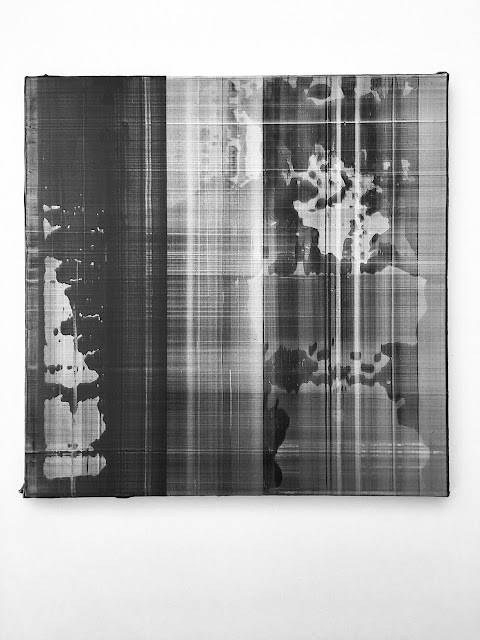 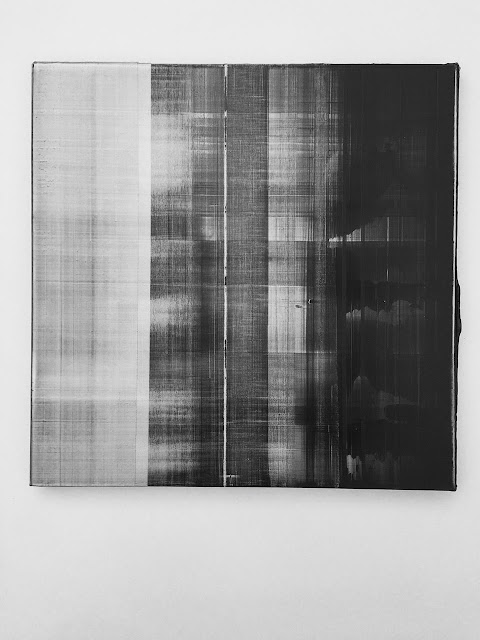 To make these works, Eric Butcher employed a window cleaner’s squeegee to spread graphite suspended in an acrylic gel  across an MDF support, and then  used a variety of metal blades to scrape this off the surface. This procedure was repeated, slowly building up an accumulation of thin residues. Four factors are in play: the application (which stutters), the support (and any imperfections in it), the instrument of stripping (which builds up traces from previous use) and the action of the artist's hand (eg varying the pressure or angle of the blade). The quasi-mechanical results emphasise, paradoxically, the consequent imperfections  in the monochrome surface - including in these examples (but unusually for Butcher) organic blobs and scumbles. 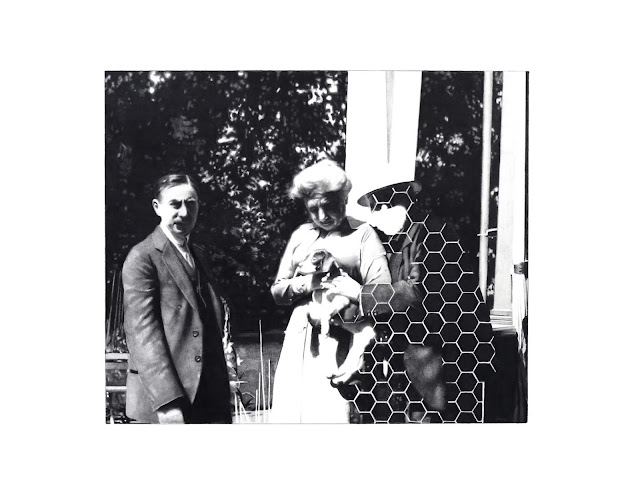 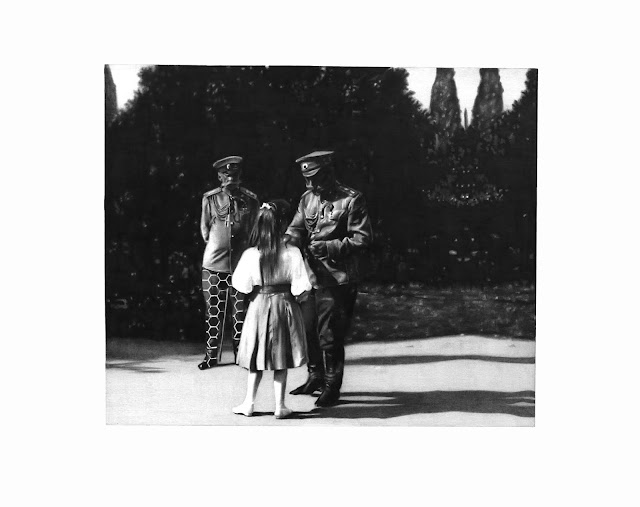 
London-based Norwegian Kristian Evju's drawings are collaged from a series of garden photos depicting the pre-Soviet Russian imperial Romanov family around 1909. He has incorporated  hexagonal patterns into a wider series of such works after finding that the hexagon, as the most solid structure in nature, is at the centre of such compounds as glucose and fructose, as well as in beehives, snowflakes and the molecular representation of photosynthesis. Evju, then, is combining two power structures: the hidden natural machinations behind leaves as factories for oxygen, and the sociological construction of political power. The bad news for forests, perhaps, is that the Romanovs were executed in 1918. 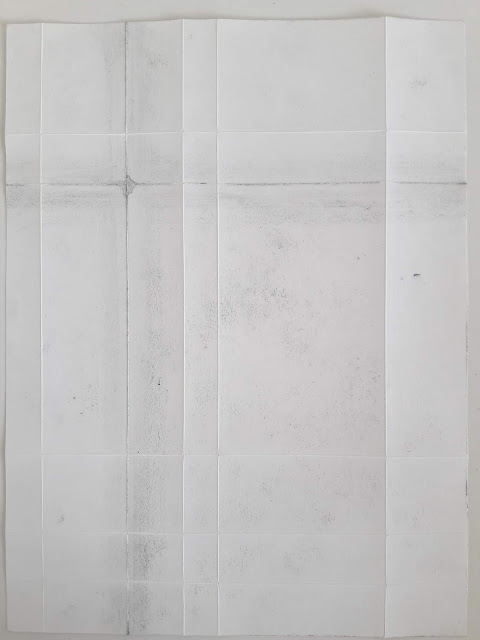 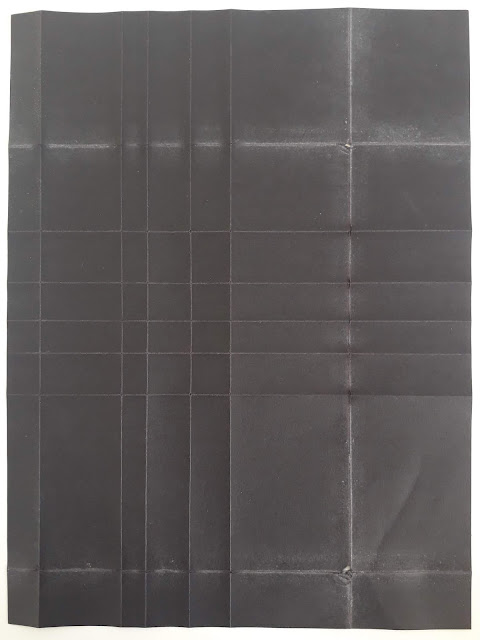 In her series Labour + Repetition = Decay, Katherine Murphy repeatedly folds paper along composed lines until it is close to breaking. She sees that as suggesting the damage caused to a worker by repeated work acts. B19 and W23 reference the management of a farm, on which land is rotated so as not to exhaust its minerals and thus usefulness. As Murphy puts it ‘repetition is present but in a managed and considered way. This is not always what we do with people in the workplace, where harmful repetitious acts are prevalent…The resulting work is formed of layers of decay created through repeated labour by different working methods, each its own composition, which when layered together builds a new composition only possible as a conglomerate of all the labour present’. 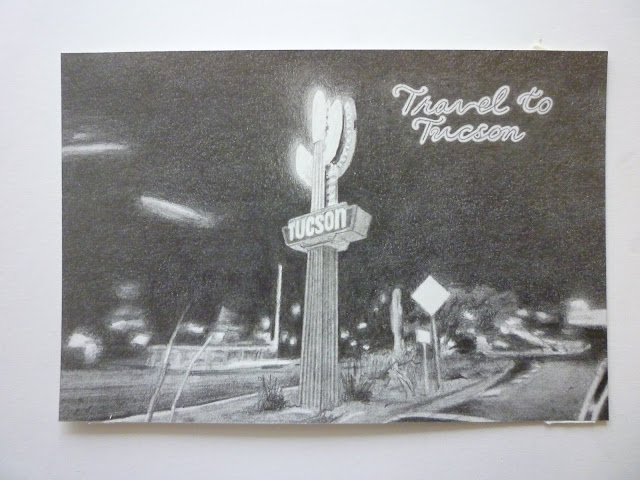 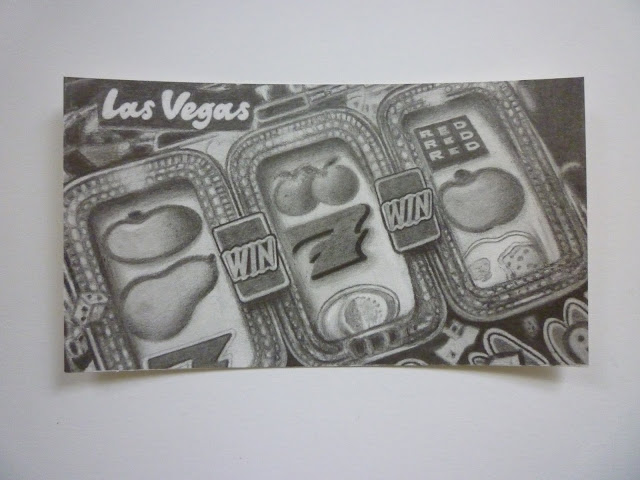 D J Roberts, picking up on the necessity for plants to display themselves in order to attract and reproduce, sends two fictitious postcards to the show. The Vegas fruit machine and 30ft neon cactus that greets visitors to Tucson, Arizona both  illustrate similar strategies in the commercial world.  The plants and fruits depicted here are designed not to be beautiful but to lure in tourists and generate business. Moreover, as Roberts says, 'plants also need to travel to reproduce - seeds and pollen can cover huge distances - and American images seemed right because for me America is the country of travel - road movies, the excitement of driving into a new town. And of course when you've arrived you send a postcard!' 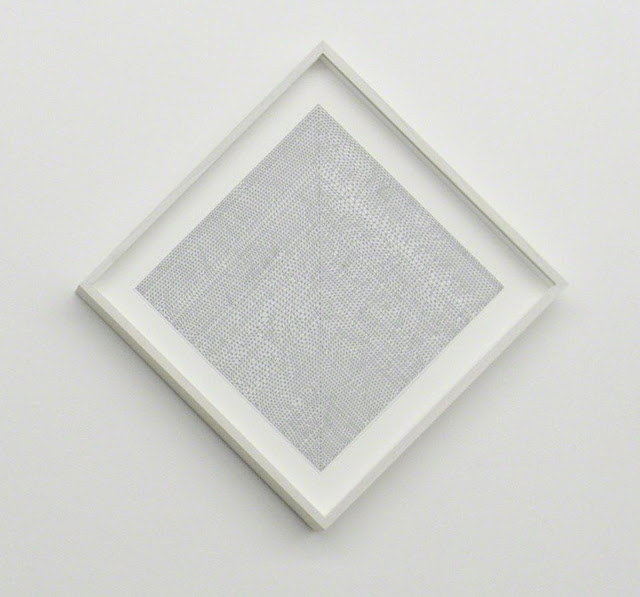 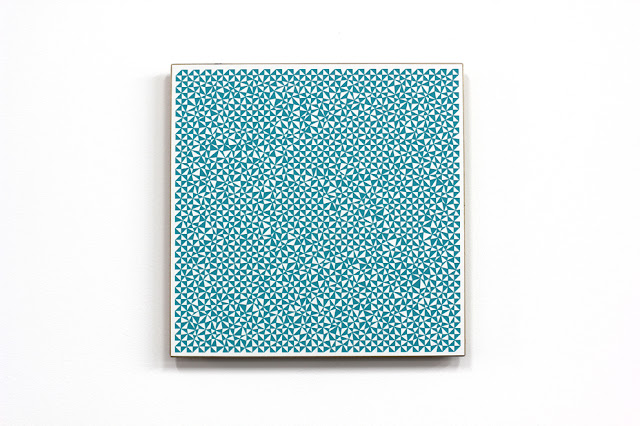 Giulia Ricci grew up on a farm in northern Italy, and the rural landscape and the cycle of seasons remain important for her, as may be reflected in the cyclical nature of her exactingly detailed geometric works, which typically pivot on the triangle. Both the diamond-shaped ink drawing Parallel/Bend no.4 and the hand-painted engraving Order/Disruption No. 3 come from series energised by slight variations which take on a cellular quality. The latter does indeed disrupt the black and white order of 'Intensity' as well as its own putative regularity, but only to the extent of a leafy blue-green.