THE SCALE OF AUTUMN


As the galleries begin to put up their biggest hitters ready for the frenzy of Frieze, I start with five shows in which the scale of the work plays a pivotal role... 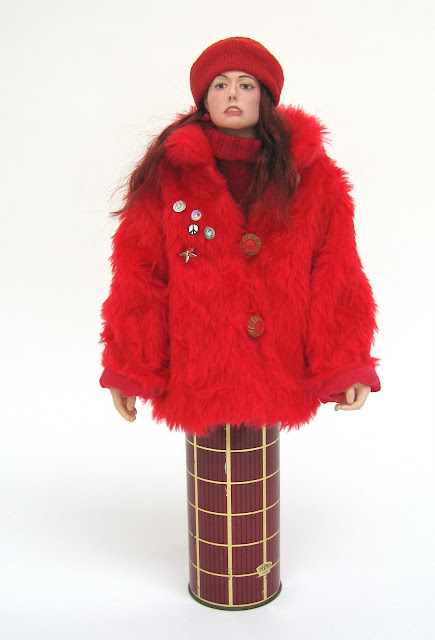 So keen has Jemima Brown been to present façades as apparent realities, she has often seduced us into praising the similitude of her life-size, hand-painted wax figures before we realise just how much of them is missing. Now the lively artist-run space Standpoint shows Brown’s explorations of identity formation, with many of the figures reduced to 1/3 size. That change of scale allows a new intimacy and quite different effects, one of which is the chance to imply bodies out of such unlikely but cunningly lifestyle-revealing items as a thermos flask in a group of Greenham Common women. In this context, a slideshow of 80 drawings from Facebook profiles suggests that, like her tabletop would-be ‘starlets’, Brown’s online ‘friends’ may be looking to create new selves. 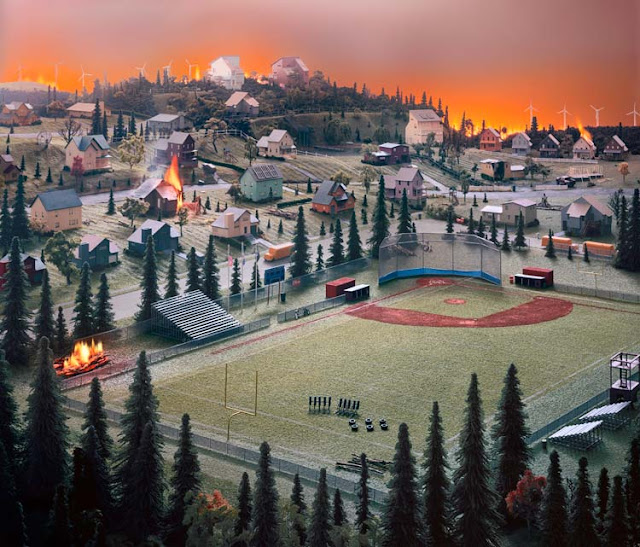 The American 'Pictures Generation' James Casebere hasn’t had the same British exposure as Thomas Demand, but for many years he, too, has been using photography to document scenes which prove on closer examination to be persuasively-constructed models, even when – as several have been – flooded. Typically, he makes monumental prints of small originals, so enhancing the atmosphere of staged unreality into which viewers are invited to project themselves The Landscape with Houses series shown here is a pastiche of the ideal suburban neighborhood, its reconfigured and rescaled elements deriving from upstate New York. 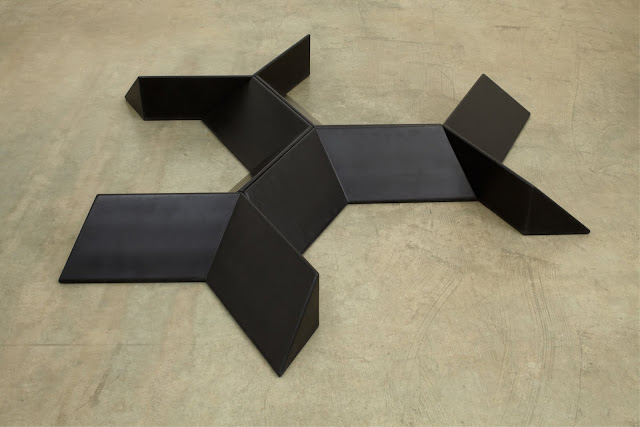 Wilkinson’s spacious main hall should be well-suited to Matt Calderwood’s tense explorations of natural forces at work in sculpture. Calderwood has previously shown videos of dangerous-looking actions with a sculptural aspect and made apparently unstable work stand up by means of water-filled elements. Here he uses a single shape to make complex meta-shapes of rubber and plywood, held in place by gravity alone. Those same shapes then become the printing blocks for works on paper which forcibly match the scale of the sculptures. Meanwhile, the upper room will house Thoralf Knobloch's painterly meditations on the most mundane of subjects.

Phyllida Barlow has a chance to work on a large scale in her first solo show for Hauser & Wirth as she continues to make an increasing impact after retiring from teaching in 2009. The space will allow her to make the most of her way of undermining the would-be-monumental through an unruly combination of builder’s materials, hot pastel colours and imagininatively ramshackle construction. Here, say Barlow, she aims to capture urban congestion ‘like something wild or feral’: expect her to take over and obstruct the former bank from basement to attic, getting in the way of our normal routes and thinking.

Tom Dale’s varied work seems to derive from asking himself ‘what if?’ questions to which he gives the most extreme answers: see http://www.daletom.com/tom-dale-films/shotthrough.html for how to maximise percussive logic. Here he pushes up to the high ceiling of Poppy Sebire’s former church hall by recreating the rough-wood aesthetic of the motorcycle stunt ramps built by the likes of Evel Knievel’s crews. Dale’s preposterously unusable sculptural versions stand in resonantly for vaulting political ambition and ludicrously overblown nationalism (no, there isn’t a performance!). A side-room explores the surprisingly parallel extent of post-communist modifications to houses near Warsaw…

The second show in Kate MacGarry’s airy new space off Redchurch Street sees London-based New Zealander Francis Upritchard (‘it’s super-cute’, she’s said, ‘when people say Ou-pritchard’) become the first artist to show in all three of her gallerist’s locations. Upritchard has a winning way of mixing the anthropological, the hippy and the hip to make her own archetypal figures, ranging from the misanthrope to the fool. They seem, as if aware that these fragmented times are the wrong ones for their ilk, to compensate for that lack of centrality through humour, colour and a nostalgia too kooky not to be cool. 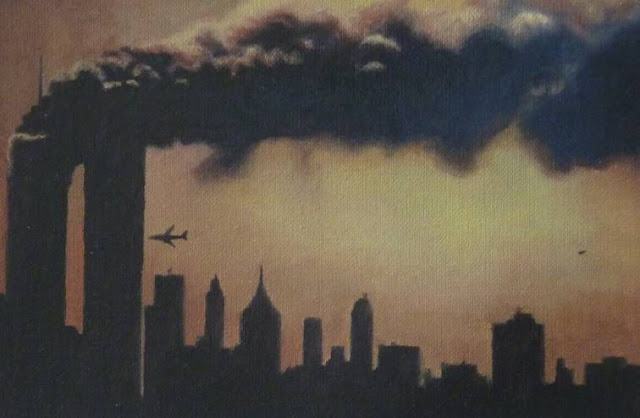 I like a good obsessive, and though Hugh Mendes seems a balanced-enough bloke, he’s been abnormally dogged this century in painting only 1:1 scale copies from newspaper clippings. Now Angelica Sule and Richard Gallagher, two thirds of the just-closed artist-run space Primo Alonso, pop up to make the most of Mendes’ long-running freezing of the fleeting by staging his tenth anniversary commemoration of 9.11. As well as paintings of newspapers, with obituaries to the fore, Mendes’ epitaph of a decade will include the names of all 3,000 Twin Towers victims laboriously written out, and Mendes’ own newspaper, returning his media gaze to its source.

Watch Me Move: The Animation Show @ The Barbican Gallery

There are plenty of reasons to catch the last fortnight of this fascinating history of animation, but the one which struck me most strongly was ‘Tango’, Polish director Zbigniew Rybczynski’s tour-de-force of thirty six obsessively looping and somehow non-interacting characters in a room. It won an Oscar in 1983 (even if Rybczynski did spend the award night in a police cell after security judged him too unlikely-looking to let back in after he popped out for a fag). In those technologically cruder times, its eight minutes required the artist ‘to draw and paint about 16.000 cell-mattes, and make several hundred thousand exposures on an optical printer’. Go to http://vimeo.com/14953710 to get the idea. 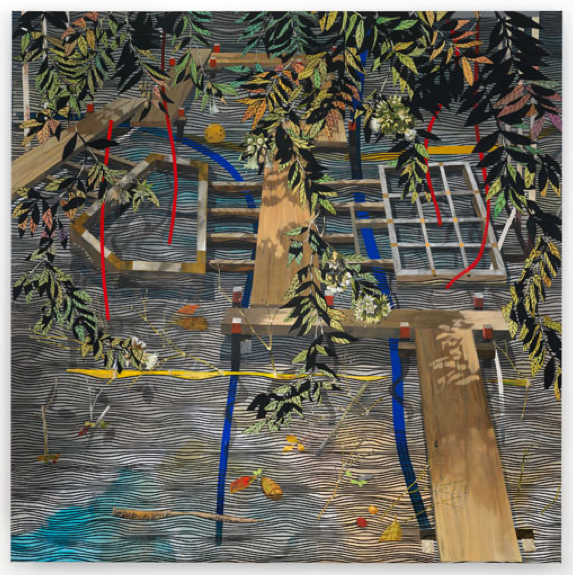 One of last summer’s highlights was an agreeably eccentric installation of activated plastic bags by the Brazilian sound installation trio Chelpa Ferro. Now a third of that team has a first British solo show: a diverse practice centered on immersive paintings, with a tendency to seep into the gallery itself to incorporate real objects and sculptures. Rio-based Luiz Zerbini’s rich mix of real and depicted, geometric and organic, inside and outside sets up an alluring enquiry into the second-hand nature of much of modern experience. Over the past year the trickery-full Ryan Gander seems to have pulled off ubiquity, adding to his first solo show with the Lisson Gallery by cropping up regularly in biennales and art fair projects while still showing in his foreign galleries, various small spaces (eg The Russian Club), running an Anglo-Italian collaborative side project (Mr Rossi) and making a curatorial splash at his wife’s Limoncello Gallery. It’s no surprise, then, to find him next in line for the impressive Artangel series, nor to hear that he will tease us with an exhibition which features seven artists who are all him, but which appears to be closed…

Posted by Paul Carey-Kent at 22:24 No comments: