THE COMBINATIONAL - TO 27 JULY

The found and the collaged are dominant modern modes: what artists choose to use, and how and why they present or combine them, count for more than their ability with traditional techniques. One could also say that life in most of the world is less about individual survival than it would have been in pre-modern eras, more about how we live together and whether we can survive that. The Combinational looks at how six artists combine materials in sculpture, video, painting, photography and mergers thereof, to reflect on how we live together . Moreover, the show is itself a combination of Canadians – Sarah Anne Johnson and Wil Murray – and Britons – Susan Collis, Appau Junior Boakye-Yiadom , Suzanne Moxhay and Catherine Herbert.

Sarah Anne Johnson (lives and works in Winnipeg, Canada) trained in photography at Yale, but takes that starting point to explore herself through such diverse projects tree planting, eco-volunteering in the Galapagos and joining a scientific expedition to sail through the arctic pack ice. One unifying approach across these projects has been an urge to expand the photographic record by inhabiting the experience afresh, such as by modelling the site or intensifying the photographs’ effects by chemical or painted interventions. Her series Wonderlust explores how she herself deals with intimacy, using other individuals and couples making love as her surrogates. Having photographed them in their homes, Johnson made studio interventions to point up and play off the wide range of emotional experiences of sex. From escapist to tantric to comic to aggressive, Johnson explores, critiques and celebrates the combinational of lovemaking – and leaves her viewers with an uncomfortable mix of voyeurism, bashfulness and sentimentality.

You may know Susan Collis as an artist whose work is easily missed, as she’s played with the values of material, labour and art by reproducing, for example, what look like accidental splashes of paint in mother of pearl. Collis is less interested, though, in invisibility than in shifting the perceived value and in rescuing the overlooked. What seems accidental and worthless proves to be deliberate and expensive to produce, whether in materials or labour. Here she takes those interest in somewhat different directions. In Depth Charge she brings together leads from propeller pencils, combining many potential drawings at the same time as repurposing the basis of drawing to minimalist sculptural ends. For value transfer of The Queens pearls Collis extracts the monarch's one visible earring from a dozen £50 notes, to form a pearl necklace and a face of sorts beneath a drawing pin nose. 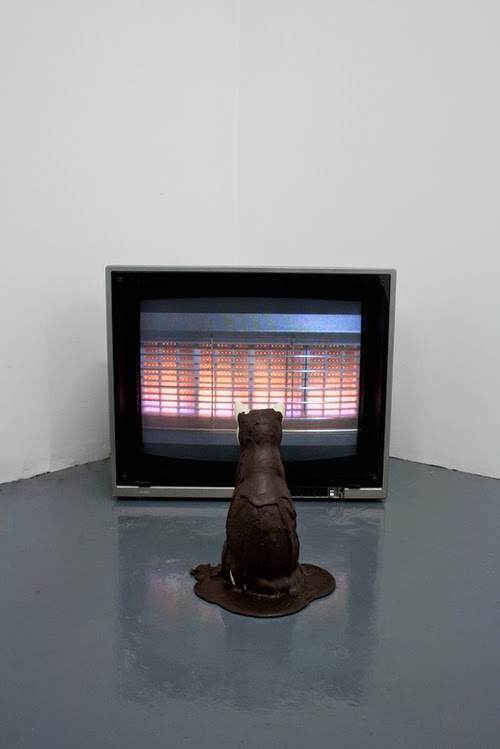 Sculptor and film maker Appau Junior Boakye-Yiadom (lives and works in London) uses the backdrop of the studio, in which everyday objects and found audio and visual footage are merged and animated into short performances, to document art as an activity through video, photography and installation. Golden Underground shows him playing a piano with a paintbrush. Mindful of Proust's ‘remembrance of things past is not necessarily the remembrance of things as they were’, Boakye-Yiadom aims to investigate the connection between recording and the present. Photographed plantains invade the filmed space in lively style; the sliding motion of the ‘moonwalk’ dance step is in turn slid across the space on a tugged TV, emphasizing the object behind the image; the slippery relationship between the production of image and words is wittily emphasised by setting Picasso's painting movements to Felix Okoye's all-too-true words: 'It would be better not to know so many things than to know so many things that are not so'. 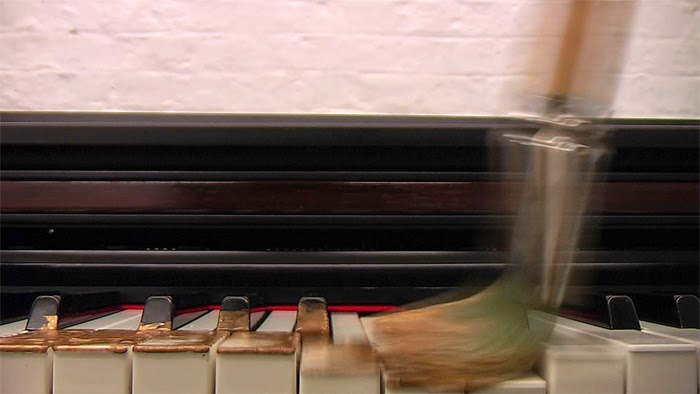 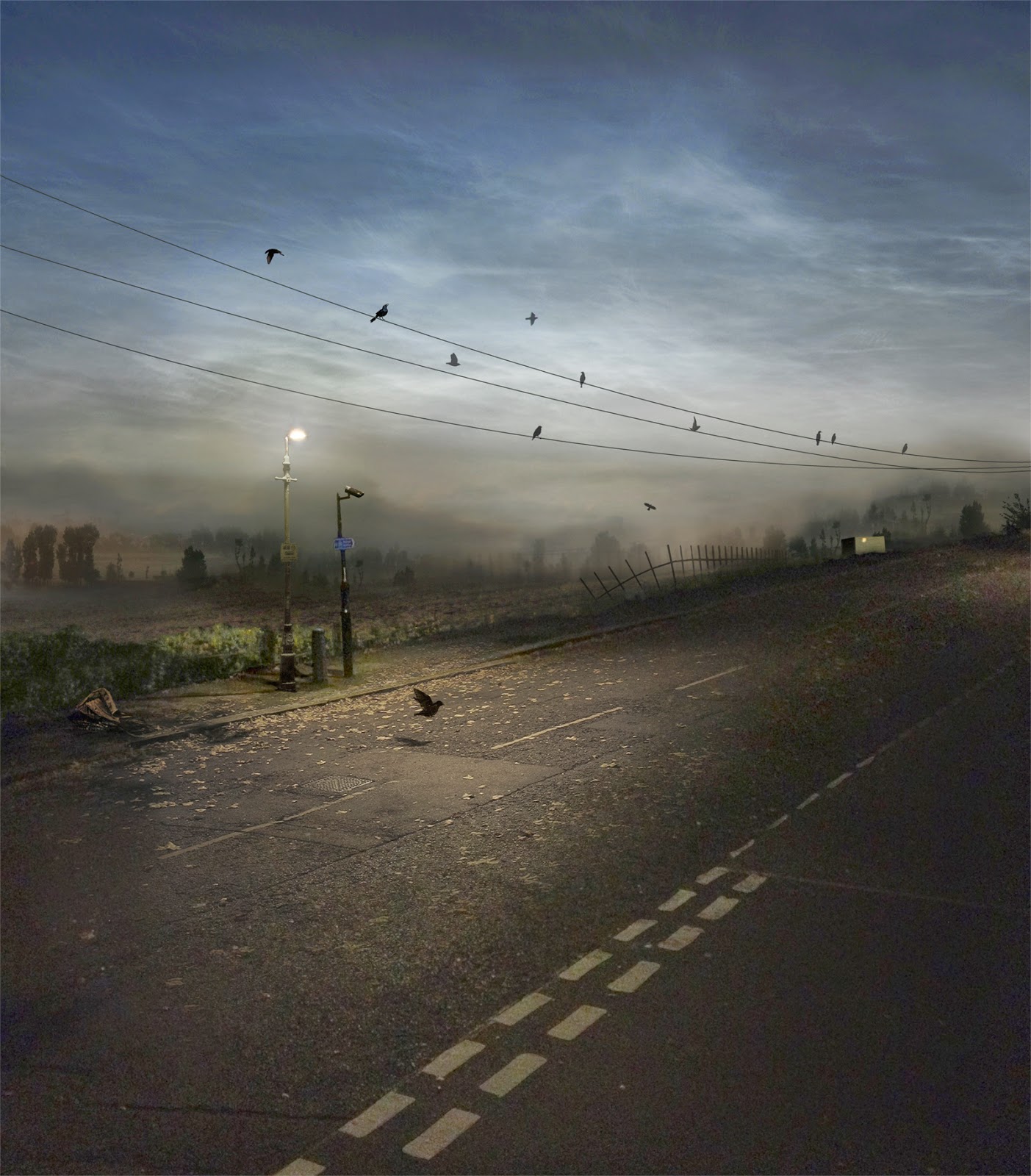 The work of Suzanne Moxhay (lives and works in London) doesn’t immediately look like collage, but her haunting landscapes and interiors are actually composed by building up miniature ‘flats’ in the style of film sets, hence the ambiguities of scale and depth. AS a result, although they may look realistic at first, on closer inspection they begin to fall apart The familiar yet distanced atmosphere is explained by the main sources of the archive which feeds that process: images from the 1950-70’s, with the National Geographic Magazine prominent. To what extent, then, is how we live now a function of how the past has fed into the present? If significantly so, then Moxhay’s visions seem to point towards a foreboding, if not apocalyptic, world to come. 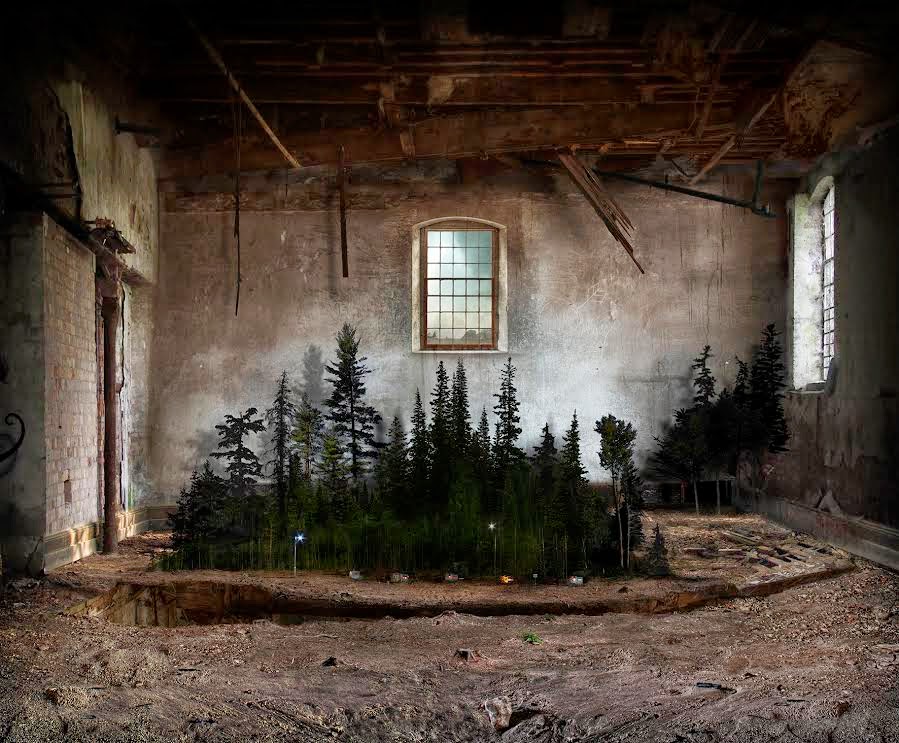 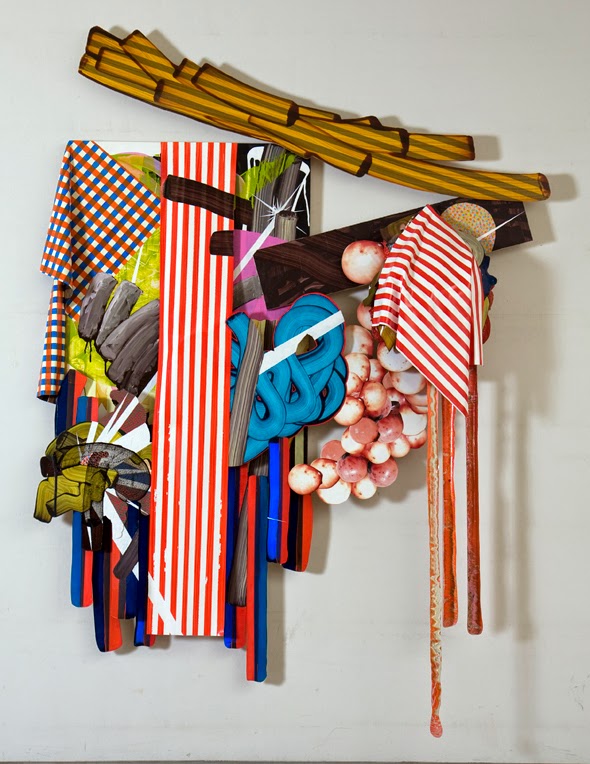 If You Lived Free Or Died Here You Would Be Home Or Dead By Now, 2010
Wil Murray (lives and works in Calgary, Canada) hybridises painting and collage. His method arose from the thought that – although it’s inevitable nowadays that paintings will be photographed and distributed on the Internet – painters never address that. So Murray asked how he could move that into his process. The result is that you need to look rather carefully to sort out the nature of what you see in his constructs: is that a stroke of paint on a flat surface; paint which has been applied to glass, removed from it and inserted elsewhere; a photographed swathe of paint, cut out and collaged, sometimes alongside their original; or a photograph of another works (or, perhaps, of his studio). When found photographic elements and three dimensionality are also in play, complex settings arise for what is at root the basic painterly gesture. Adieu Vielle Europe 5 combines scenes from old travel and tourist photography books as if through an on-screen wipe. 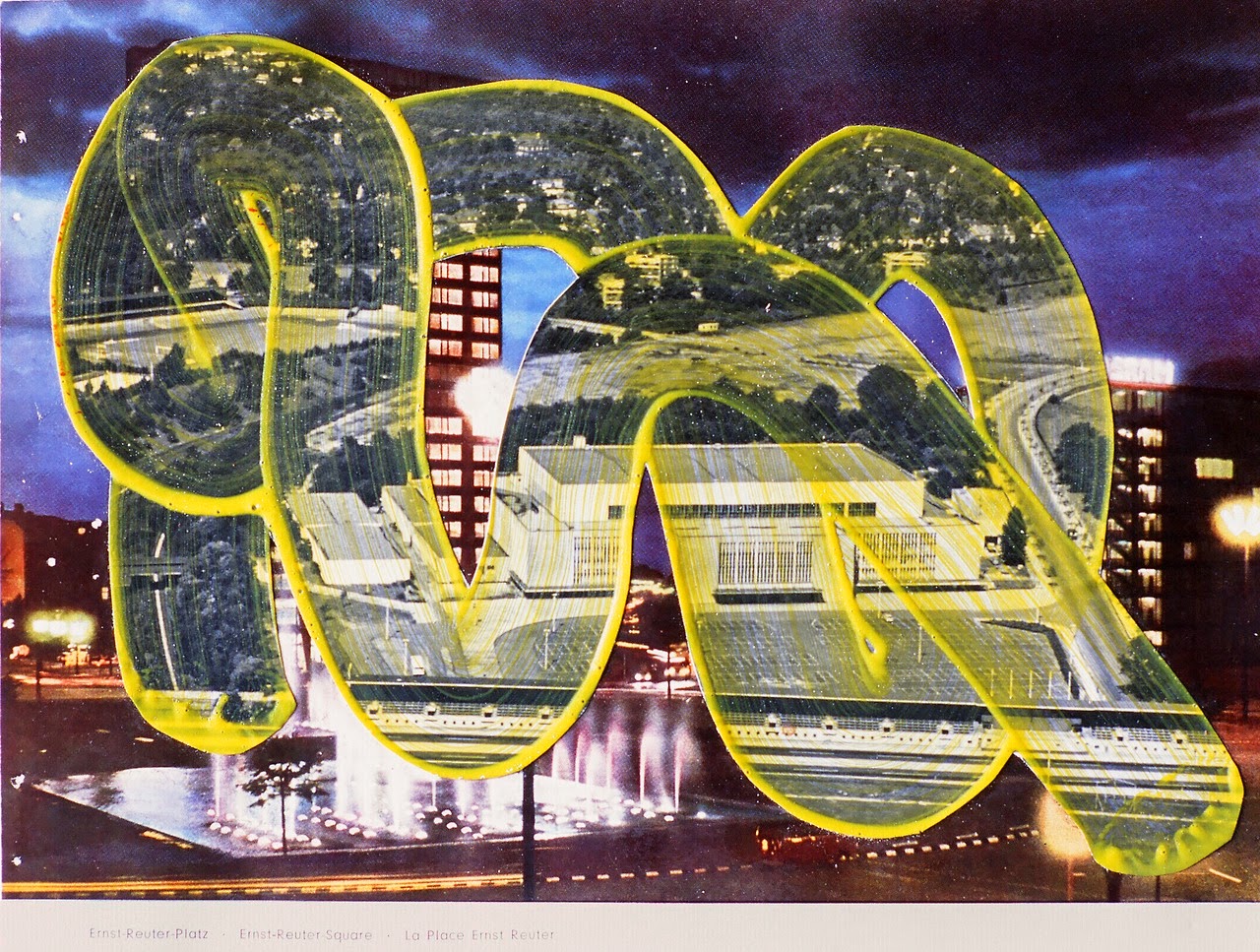 Catherine Herbert (lives and works in London and Chelmsford) makes intricate collages which combine cut-out shapes with acrylic and glitter, using a template made from her own preliminary drawings. So, for example, images of trees are applied to a shape taken from a drawing of an ivy’s growth, linking what strangles and negates the tree to its reappearance through different means. Other collages enact a parallel move by creating animalistic forms out of images of genetically distorted life, so building in the consequences of our maltreatment of the environment. Given those concerns, her combinations of cacti don’t just bring an alternative spiky beauty, they pose such questions as: is this unnatural act a stand-in for human relations or for genetic distortion? And, if the former, is that relationship symbiotic or parasitic? 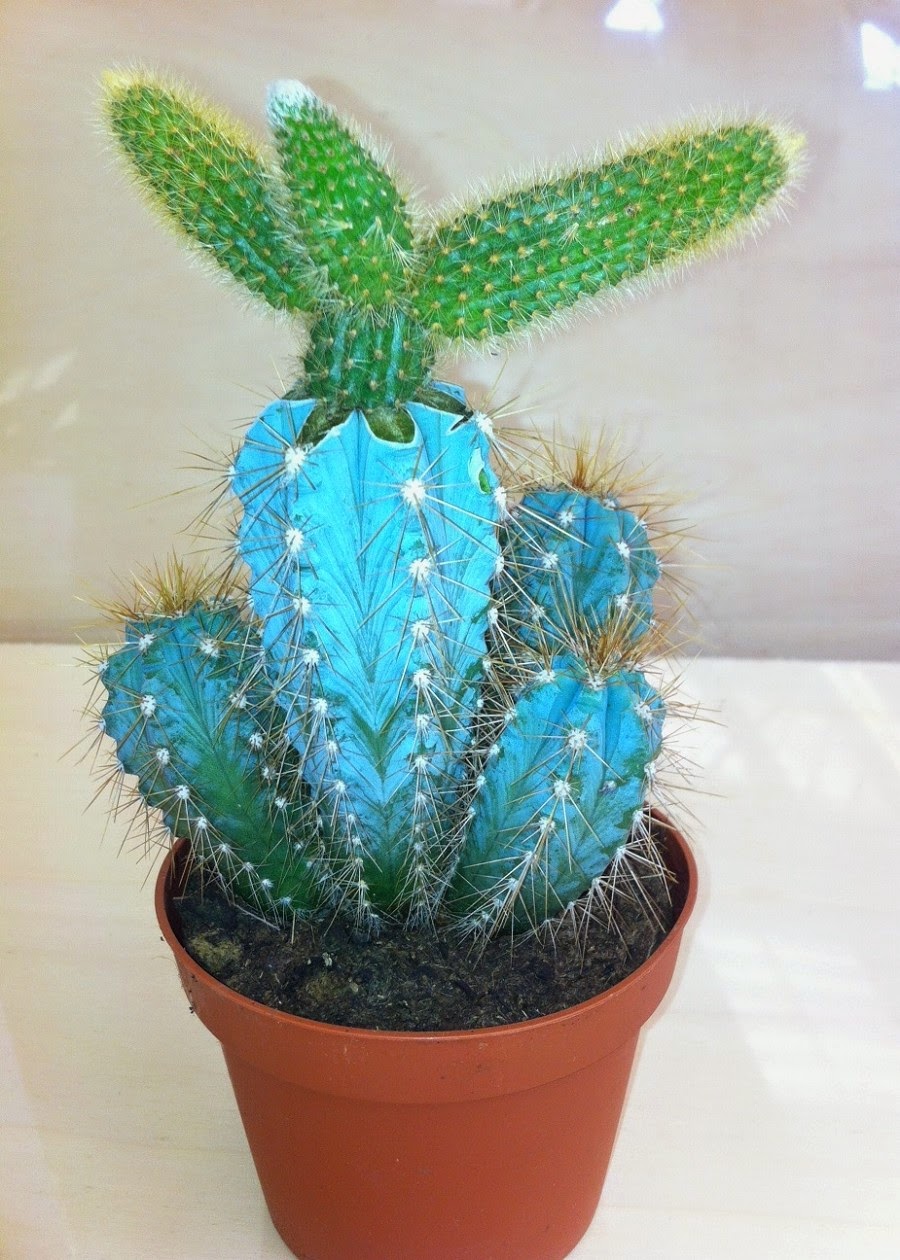