GURSKY AT THE HAYWARD AND FOR PHOTOMONITOR

PHOTOMONITOR is an excellent free online resource, with listing, reviews, portfolios and plenty more all related to lens-based art. I've written there for some years, but thought I'd highlight in particular the ongoing Gursky show here...

The first thing to acknowledge about Andreas Gursky’s 68-work retrospective at the newly reopened Hayward Gallery is that it has a wow factor – even images with which you are familiar in reproduction have a fresh impact in the huge formats he favours. The second is that the two year refurbishment of the Hayward has generated no wow factor at all apart from opening up the roof. Subtle is the word – but the show looks good in the space, and it is fitting that Gursky is an artist who engages with architecture.

Installation view
Gursky’s had enough major shows for a critical consensus to have built up around his work. That positions him as a product of three main influences: his father’s profession as a commercial photographer; the dispassionate and typically high viewpoint style associated with the Bechers, his teachers at the Kunstakademie Düsseldorf; and an interest in applying those lessons to social geography in the manner of the romantic tradition of the sublime. From the ’90s onward he has become known for using digital manipulation, moving decisively away from ‘straight documentation’ to become the first photographer famous for ‘painting with pixels’. The results emphasise societal interconnections, globalisation and the nature of capitalism. He is typically praised for his knack of choosing subjects with the metaphorical heft to convey the complexity and problems resulting from changes in the world, whilst generating a beauty which complicates the implicit critique. The price of achieving all that is seen to be a certain coldness and lack of engagement with individual feeling. 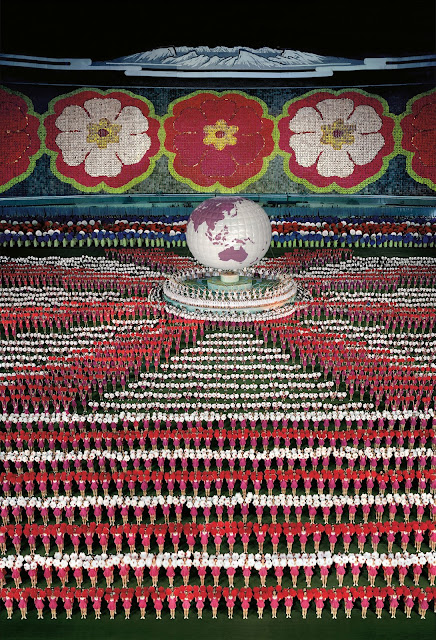 If those are your views, they won’t be changed by the Hayward show, which contains only eight previously unseen images, two of which are new prints from the material gathered during his trips to North Korea in 2007. There he took the God-like viewpoint to an extreme, in the form of Kim Jong-Il’s elevated seat looking over the display by 30,000 schoolchildren. It seems sensible, then, to focus on two questions: how does Gursky achieve those well-known effects, and what can that tell us? And what do the handful of the most recent images say about Gursky’s current direction? 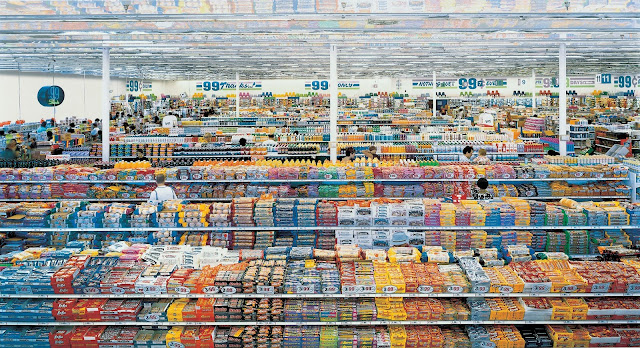 99 cent (1999) which depicts a supermarket complete with digitally added ceiling reflections of the brands on display, is famous and typical. It is structured by a system of parallel lines that provide the possibility of infinite extension of the consumer products on display. Parallel lines can be seen as anti-perspectival, and what Gursky terms his ‘aggregate state’ photographs of repeated elements are typically structured around them, sometimes within a grid, as a means of flattening perspective.


That, which might be seen as anti-hierarchical and democratic move, is at its clearest in Paris, Montparnasse (1993) in which a vast block of flats is built up from many separate shots taken from two viewpoints so that all the dwellings are presented exactly front on. Such images have been equated with Kant’s definition of the mathematical sublime as ‘that in comparison with which everything else is small’, but another aspect of Kant seems equally relevant. He held that objects of sense are mere appearances ‘based upon a thing in itself, though we don’t know this thing as it is in itself, but only know the way in which our senses are affected by this unknown something’[i].

The way in which Gursky’s digital interventions elaborate on and ‘perfect’ reality or push it further in the direction seen to be its essence suggests access to a hyper-real ‘thing in itself’ beyond our superficial perceptions, beyond the subjectivity of a perspectival viewpoint – for surely perspective isn’t in things in themselves. See, for example, how the frenetic activity of mechanics at a motor grand prix is exaggerated by Gursky’s replication of the team of ten so that thirty are present in F1 Pit Stop 1 (2007); how distractions such as a power station are removed from Rhine II (1999) to present the fantasy riverside path along which to jog; or how the compilation of individual shots in May Day IV (2000) enables us to see the individuals in a crowd as lost in their own bubbles even as their identities are subordinated to the collective experience. 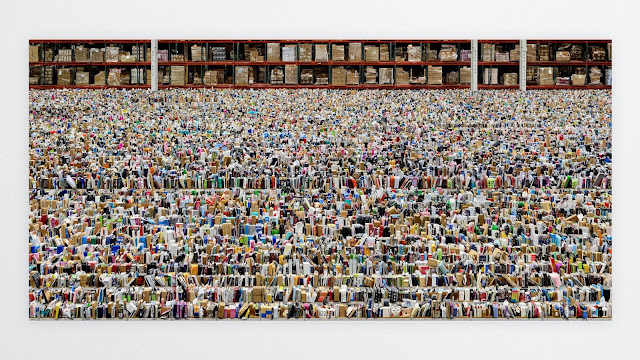 That’s often seen as a difficulty in Kant’s epistemology, for if we are in principle unable to access the ‘thing in itself’, what explanatory value does the notion have? That’s not a problem in art, the very heart of which taps in on the empirically untestable instincts of the subconscious. Painting seeks that too, of course, but the indexical starting points which Gursky’s works retain provide a different setting, and more easily persuade us that we may be seeing a vision of the world which is made somehow ‘more realistic’ by the changes to the documentarily real, by their departures from conventional reality.

So that’s classic Gursky: the metaphorical application of the mathematical sublime to reveal the thing in itself, especially where that points to the socio-economic systems behind appearances. His great workplace interiors are well represented here: Tokyo, Stock Exchange (1990), Karlsruhe, Siemens (1991), Nha Trang (2004) and Chicago Board of Trade (2009). Nor has Gursky given up constructing such images: Amazon (2016), is in exactly that mode, and doesn’t feel like just going through the motions. Not only are there the parallel lines of what looks like an overwhelming and disorganised stocking system (possible because searches are computerised) but as Gursky says “They have it in very big letters—’work hard’ ‘have fun’ ‘make history’. It’s a sign of our times. Amazon is a company that you can’t ignore.” That said, he has always applied comparable approaches to other tropes. There are several images in which the focus is on architectural details which are made disorienting by selection, repetition and scale (eg the carpet of Untitled I (1993) or the roof of Brasilia, Assembly Room I (1994). There are remote landscapes which, reversing that move, might be interpreted as abstract (does Untitled XVII (2015) show poppy fields or colour bands?) or microscopic (Antarctic (2010) – snow or cocaine?). And there are pictures about making pictures (Dark Room, 2016), or about looking at them (Turner Collection, 1995).

What of the more recent work? Several depart from the categorisations above: first, through the introduction of identifiable ‘characters’; and second, by the acknowledgement of the mobile phone. The characters instantly undermine the reality of what we see. That may be because they are superheroes, such as Ironman in SH 1 (2013), where his romantic entanglement makes for a nice joke and also plays off the Katharina Fritsch sculpture of a caveman-come-hero (Lehmbruck I, 2013) in the same room: there are plenty of such neat curatorial touches. Or it may be due to the comical implausibility of the construction, as when the last four German chancellors are collaged into looking at a Barnett Newman painting: Review (2015). That strikes me as a bold move, but a misfire. White Cube throw a maximal spotlight on Review by making it the one image in its concurrent Gursky show: at the Hayward it felt like a cheap trick in a way which the altered landscapes don’t, and seeing it on its own made me think of Alison Jackson’s photographs, in which look-alikes mimic celebrities, apparently caught in embarrassing or over-intimate scenarios. 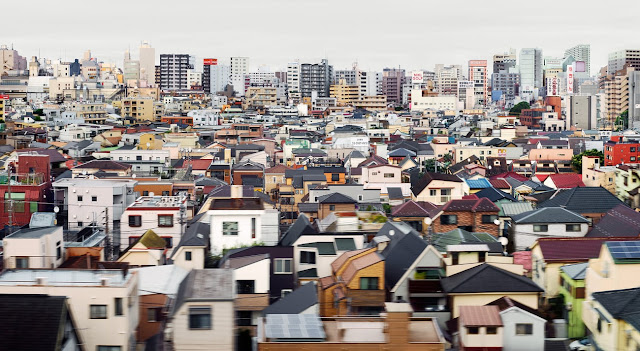 The phone-influenced strand is much more germane, as it connects to Gursky’s investigations of picture-making and perception. There are two big images which use impure focus creatively. Utah, (2017) originates from a phone snap, the effects of which Gursky recreated at scale, including several blurred areas indicating movement and the passage of time. It’s no stretch to see this as Gursky responding to his fellow German big beast Gerhard Richter. So alerted, Paris, Montparnasse reads as a Richter colour chart and Storage (2014), as one of Richter’s austere sculptural installations of glass in a metal structure. But, if the blur in Utah is an homage, that in Tokyo (also 2017) arrives promisingly at what might become the ‘Gursky blur’ as opposed to the ‘Richter blur’. It controls our gaze by adopting differential focus in sectional parts of complex surface, digitally inserted and not consistently related to distance. We’re back to Kant, to an illustration of how our own state of relative movement or attention, which aren’t in ‘the thing in itself’, feeds into our perceptions. And this is metaphorical territory, too: such, we might conclude, is the shifting and uncertain state of the world.