Art Rotterdam – 132 galleries with 25,000 visitors – continues to increase in popularity. It’s the main event in a wide-ranging art week which has plenty to justify a visit even if you don’t – as I did – venture out to nearby Schiedam and The Hague (where the Mauritshuas recently reopened after a refit).

Artists! They're never satisfied – at least, that’s how it seems, given they’re forever trying to turn what they’ve got into something else, if only what it used to be.  Here are ten  transformational works which appealed to me in Rotterdam: four melts, four repurposings, one pretence and a bang of sorts to finish... 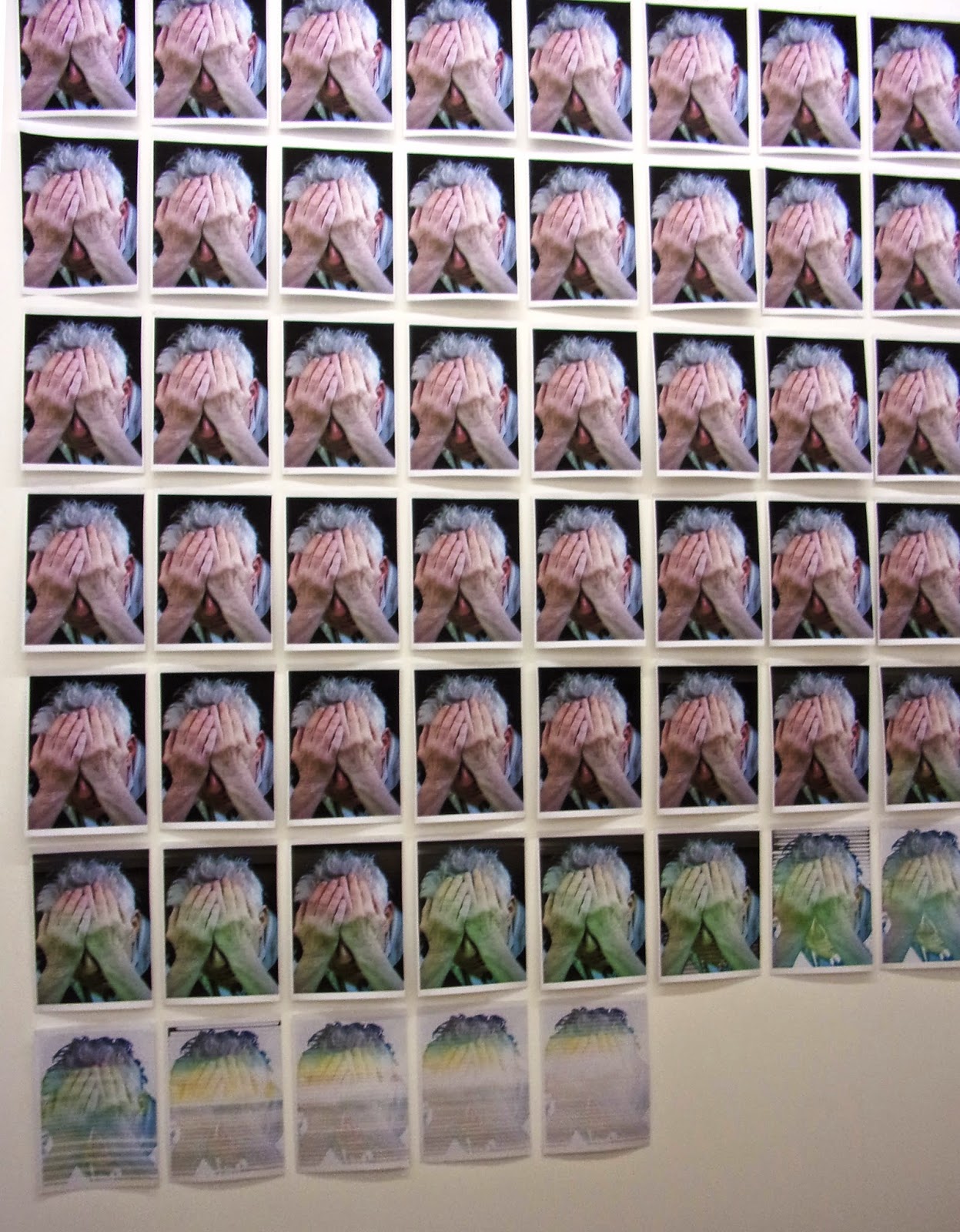 Amie Dicke is a locally-born artist best-known for corrupting photographs by removal. I preferred the two acute transformations she showed at the fair. First, the faint residues of colour in biros she’d used up were enough to turn a bunch of them into a ‘Crystal’. Second, she ran a photograph of John Berger in a pose of despair through a printer until – after 53 copies – it reached the blank beyond faintness. Berger did indeed suffer something of a melt-down during the interview in question, and various sub-texts about the art world could be read into its presence here: have the good ideas already been repeated to death?  Well, if there’s something of Warhol in the piece, that fits the theme… 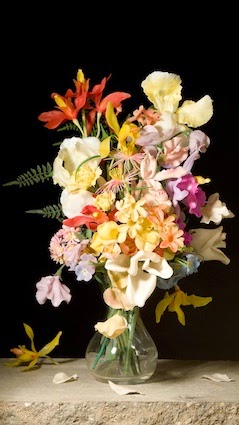 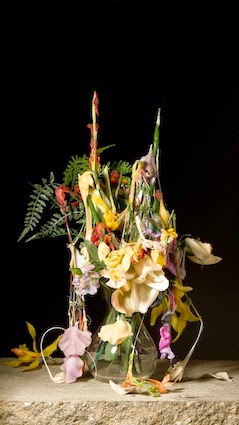 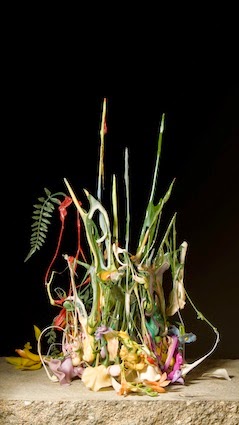 If you’ve seen Sam Taylor-Wood’s best-known pre-Fifty Shades work, Still Life, 2001, you might have put ‘time lapse vanitas’ into the ‘done’ box. But no: young British-trained Dutch-dwelling Finn Sara Bjarland impressive solo stand gave the genre a riveting spin with a film of plastic flowers subjected to heat over 90 minutes which become 20 minutes of film reducing their artifice to an organic gloop clinging to the metal reinforcers at the core of each stem. Her films of dying insects are also weirdly compelling. 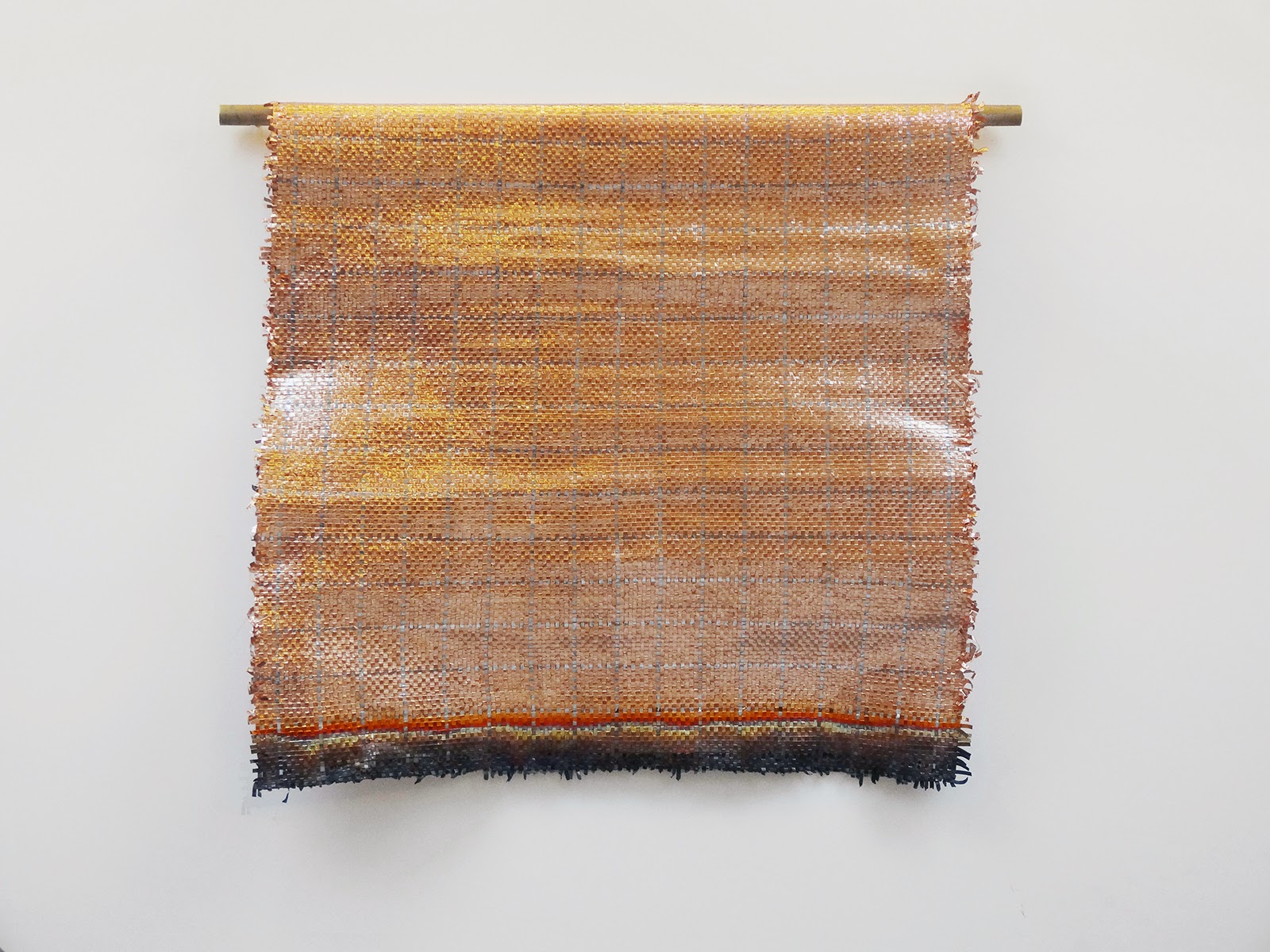 Copperfield Gallery director Will Lunn didn’t realise that Art Rotterdam leaves the supply of furniture to the galleries, and had to turn the crates in which David Rickard’s work arrived into makeshift table and chairs. That didn’t stop a couple of visitors asking whether they could ‘buy the furniture’. Luckily, others wanted the art, which made sense given that the London-based New Zealander’s solo show was fizzing with ideas. In Binary Dilemma he sends a traditional material out of art then claims it back differently. Strands of copper (88%) and tin (12%) are threaded into a cloth of sorts which you could argue is bronze. Certainly the bar it hangs from is bronze, as is the some of the lowest zone of the cloth, to which Rickard has applied a blowtorch. 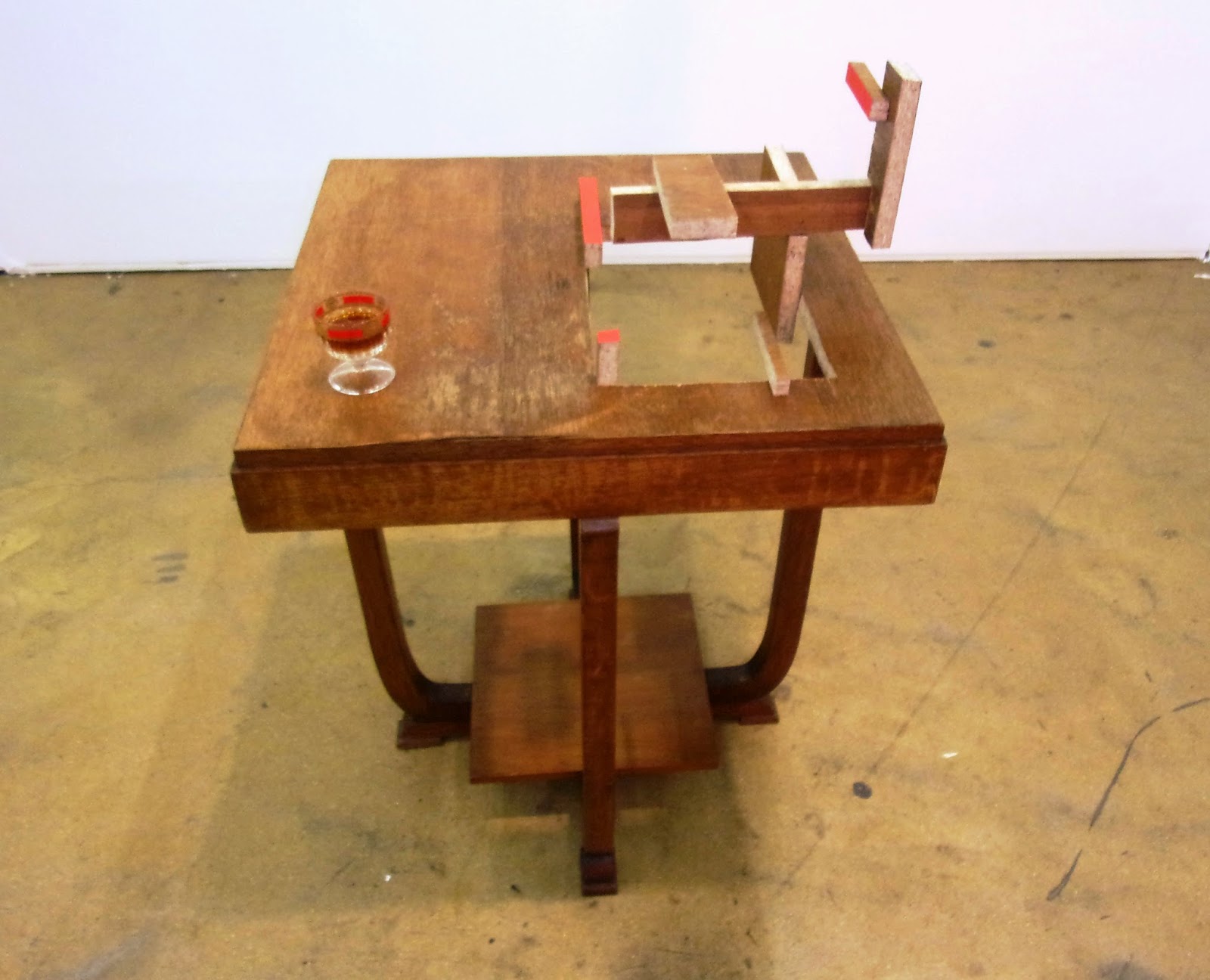 Oscar Abraham Pabón: How to be a Table While Remaining a Sculpture, 2013 at Martin von Zomeran

It seemed to me that Martin von Zomeran could have helped Will out, for not only did he have a chair and table, he also had an artwork which took that form complete with a restorative glass of whisky. What’s more, there was something Ricakardian about the way Oscar Abraham Pabón’s How to be a Table While Remaining a Sculpture straddles categories of transformative potential as modernist forms emerge from a table which refuses to make the whole move from function to art. It also fits neatly into the Venzualan Rijksakademie graduate’s wider project of finding forms which ‘dwell on the preceding instant’. 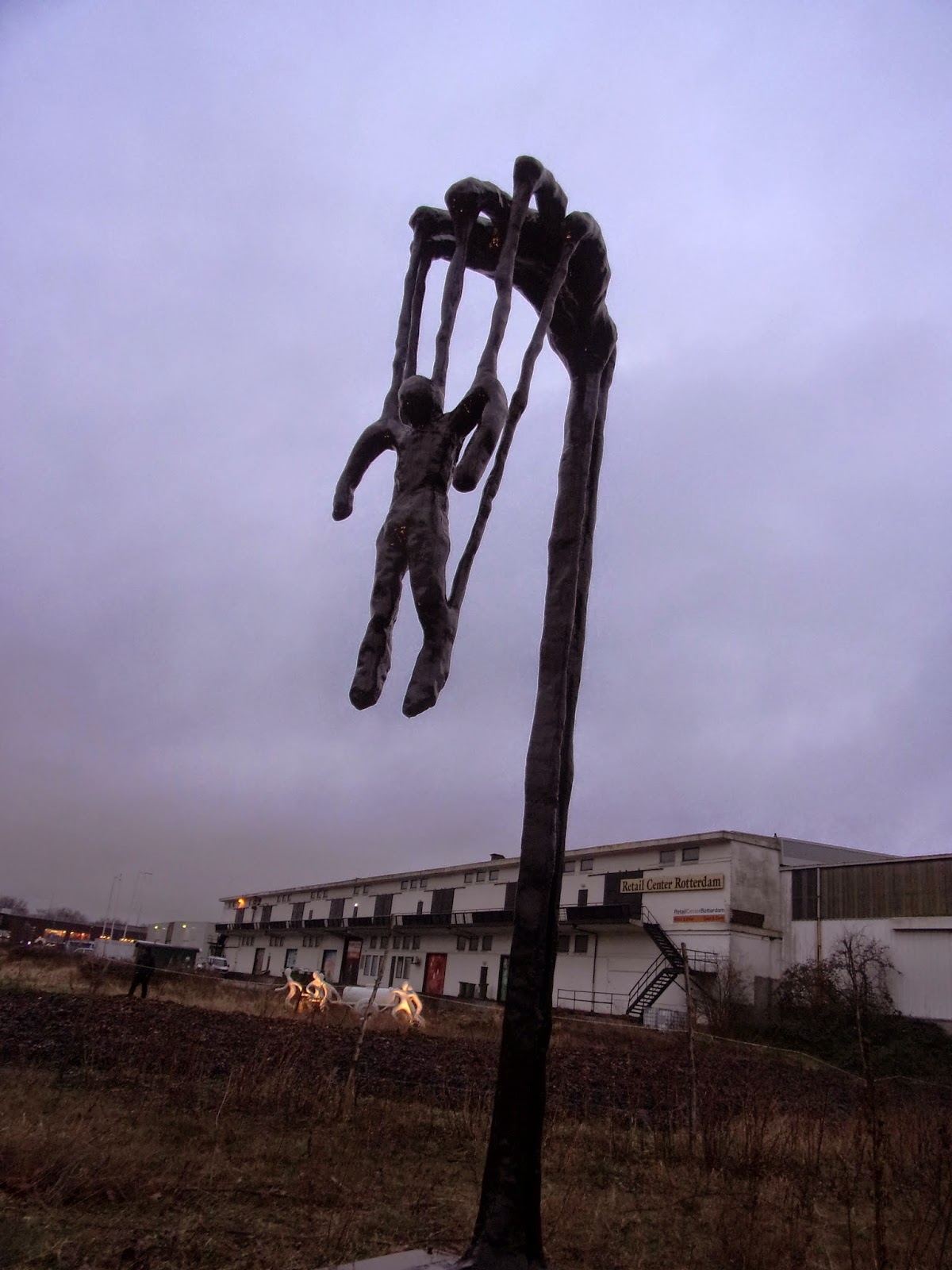 The highlight of the subsidiary programme was the chance to visit the biggest studio in the Netherlands, where the 25 who constitute Atelier Van Lieshout run fibreglass, sculpture, wood and metal workshops.  Founder Joep Van Lieshout’s transformative agenda is a big one: to ‘close the gap between man and machine’.   AVL’s New Tribal Labyrinth project of recent years holds that society will disintegrate along tribal lines and return to the agricultural conditions from which a second industrial revolution will emerge. In preparation for that, AVL has built a monstrous blast furnace on which to  centre new social cohesion based on the archetypal Victorian material of steel (98% iron, 2% carbon: next up for David Rickard to weave?), The 25m high behemoth was swallowed up in the Atelier’s complex on the outskirts of Rotterdam, along with many sculptures of the people and buildings of the putative next step in our history. The invisible hand here I take to be that of fate. 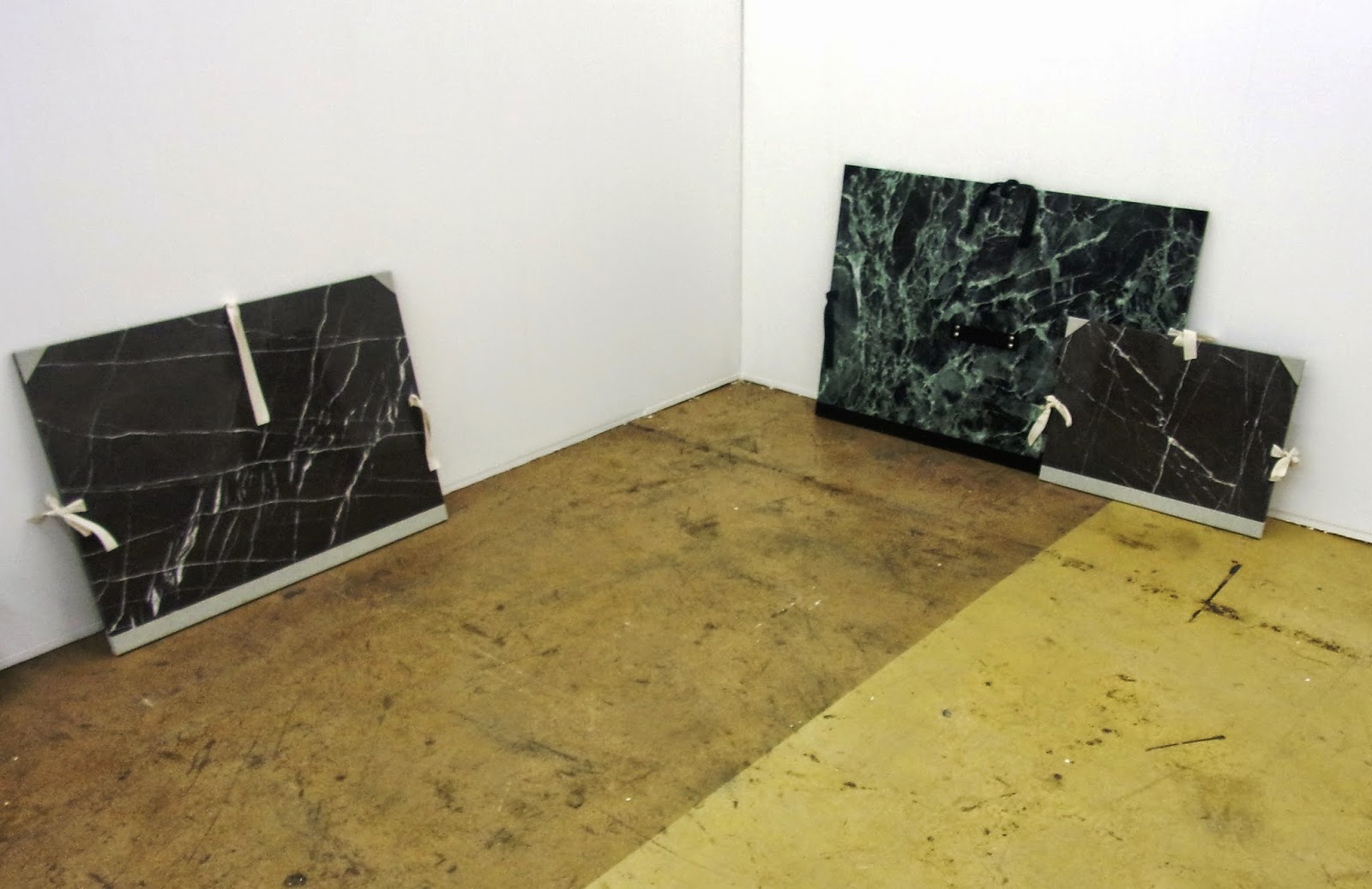 I enjoyed the pretence, pun and deeper point typical of Belgian Peter De Meyer’s decidedly post-Broodthaers conceptual humour. A marbled pattern is  typical of the covers on holders for portfolios of drawings. So it looks at first as if De Meyer's work has yet to be unpacked by his lackadaisical representatives.  I’m wise to such tricks, but not only is this the work, it actually is marble, complete with ties to make its use clear. Good luck with that… A neat cover, to adopt pop parlance, of the artwork which it isn't - possibly a version of  Roy Lichtenstein's painting Compositions, 1964
_________________, 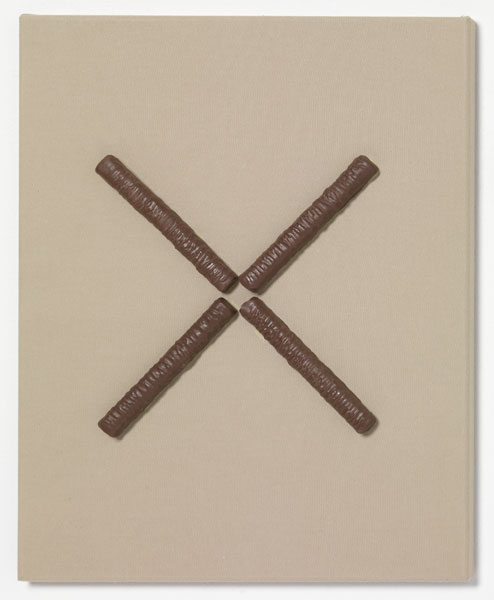 There’s something of a Dutch tradition of fusing a pop interest in everyday design and packaging with a geometric formalism. Jan Henderikse (born 1937)  is a prime practitioner with his gridded arrangements of such as beer and matchboxes. Maybe that’s why they've taken to the Hamburg-based  Thomas Rentneister, who pulled packs of chocolate biscuits out of their usual place on the shelves to make a triangular stack, as well as turning Twix bars on polyeurethane on fabric into a sweet piece of mathematic minimalism. 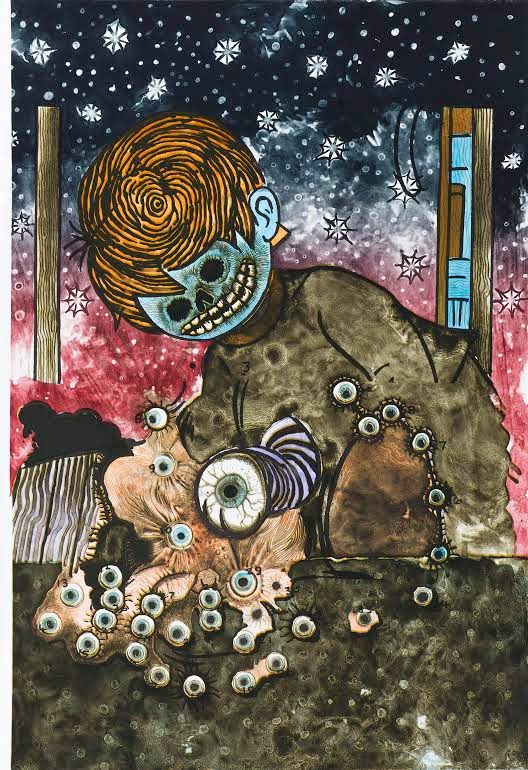 The Chapman Brothers famously enjoy taking darkly adult advantage of the materials of childhood innocence – or should that be revealing the world of the supposedly mature and immature to be much closer to each other than we’d like to suppose? Colouring books have been a favourite target for some years, but a new set of four such transformations as large lithographs felt fresh – the energetic excess of eyes in this one was well worth a second glance, though I did wonder about the spelling of 'disleksiks'. 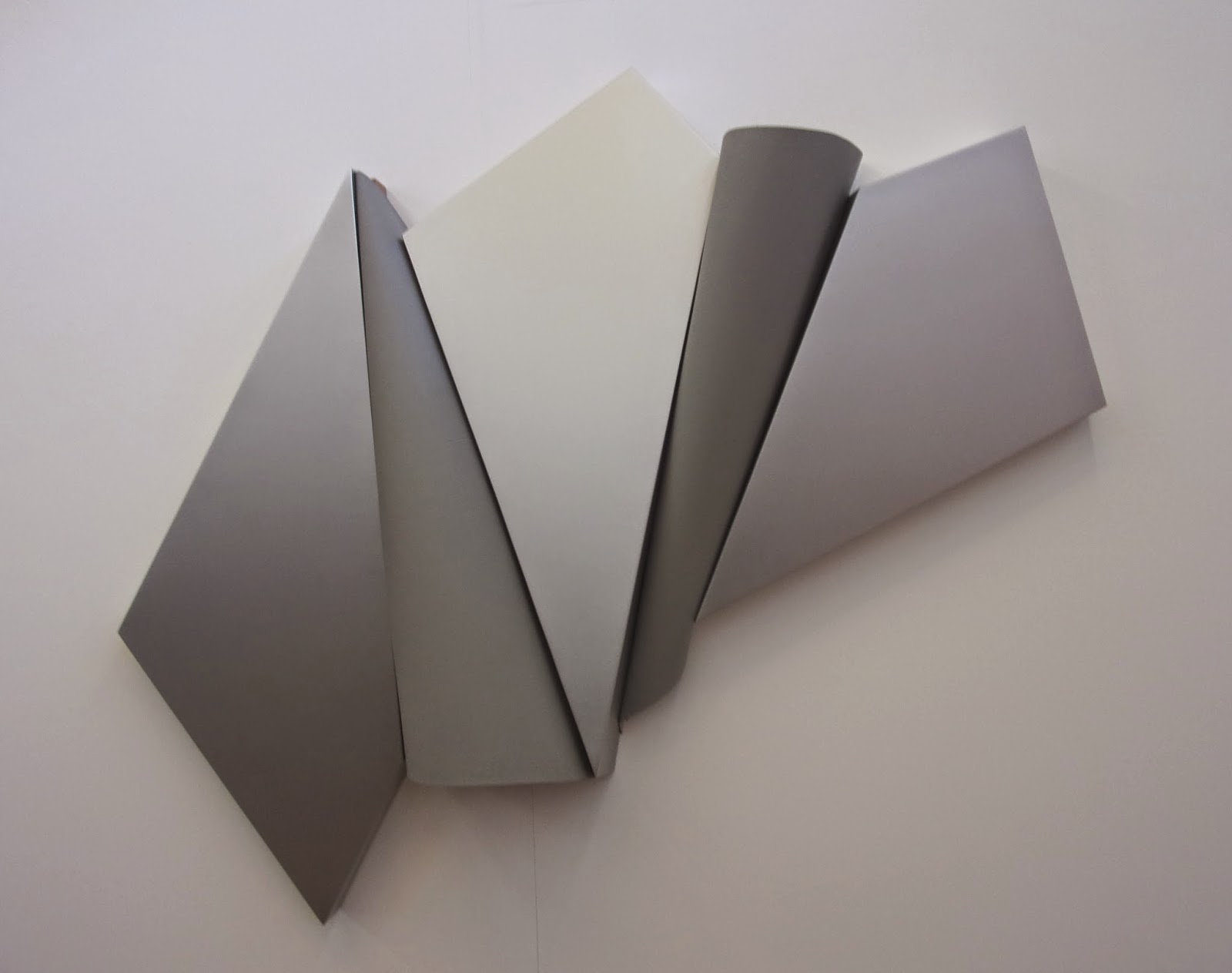 One of only two American galleries present was showing a German painter for whom achieving colour varaitions by mixing paint was too simple: he preferred a cunning construction which – without any special lighting – turns one grey into five sufficiently different shades that it took me a while, looking how they changed as I moved around it, before I conceding that no tricks were turned in this particular demonstration of the well-worn but often enjoyable point that out perception is subjective. Next up, his fifty shade collaboration with Sam Taylor-Wood? 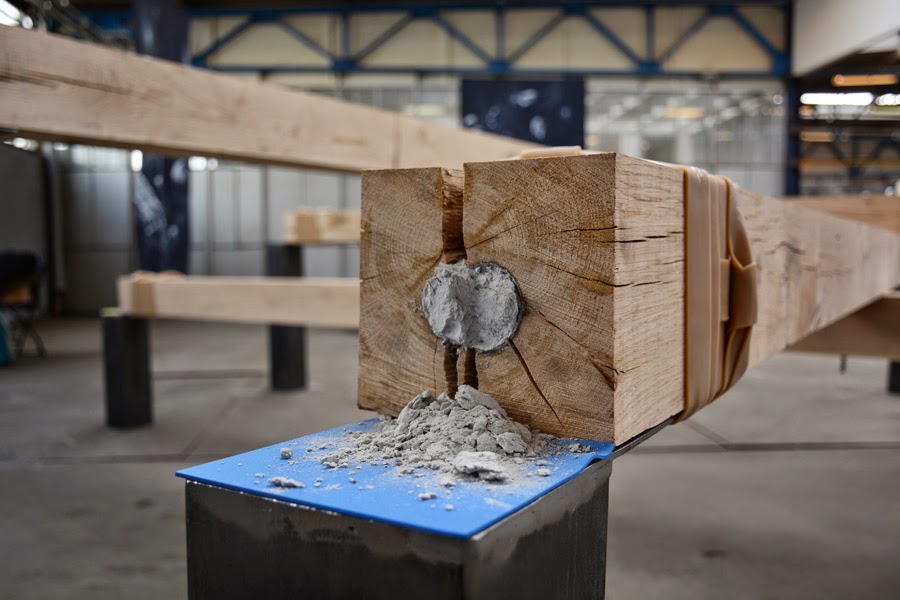 This was an explosion, but not as we normally know it, as was set to happen over several days – slow, though on the other hand quick compared with leaving the cracking to nature. Ex-engineer Enrico Gaido has investigated such matters, hence the title's calculation of necessary forces, and has previously trapped an explosion in jelly. Here he forced expandable cement into holes drilled into beams of wood, The power cracking the wood is, says Gaido,  ‘the growth of an absence’. If that sounds implausible, it’s not that additional matter is created, just that there’s an increase in the void’ within the beam.  And a new way to create a changing sculptural formation.

I stayed at the very friendly and high tech CitizenM hotel, which has just opened in London as well as Rotterdam, and sponsored the Fair. In each Citizen’s room a tablet controls everything from mood lighting to blinds to an impressive range of free films, and neat touches include international plug fittings for your own gizmos.

Posted by Paul Carey-Kent at 03:30 No comments: