There are some obvious questions to be asked just now. How mad was van Gogh? What kind of bad is that Ofili shit? Should you dump in Landy’s art bin? Why is the ICA showing Billy Childish? Can Dylan paint? How much can a Giacometti be worth? Why is the Hayward closed for so long for refurbishment so soon after it was closed for so long for refurbishment? And who was Theo Van Doesburg? You’ll find none of the answers here, just ten lively new shows to visit, to which you can add a dozen previous recommendations which are still on view as I write... 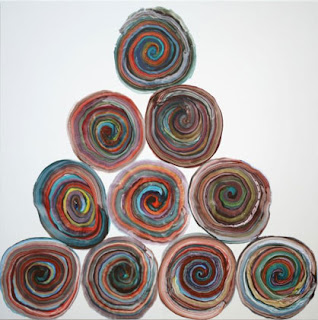 Bernard Frize finds ever-more ways to let ‘the brush paint’, as he puts it, by setting up the imaginative procedural frameworks within which he can see where chance leads him and his collaborators (many of his paintings are multi-hand productions). Past procedures include painting a wide brush in various colours before use, games with a single stroke or how often lines can cross, and using extreme brush sizes or a spraygun. This exhibition introduces four new ideas of which the ten large paintings become the manifestation. Three of them lead – as has been usual – to paintings which look instantly and seductively ‘like Frizes’, despite the role of chance (‘that’s a harsh accusation’, he once teased me, ‘ I know that I have been doing the same thing for more than thirty years, but I am really trying to change.’). That makes ‘Lud’, which required two steps of blocking and washing the paint rather than his usual single hit approach, the most striking because least characteristic work here. Having shown at Frith Street before he moved to Simon Lee, Frize has been among the more visible French artists in London, but deserves a major public show. Until then, this is a welcome update. 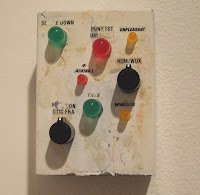 What Verb Did Hunt

Simon Morse: I Cannot See the Trees But I Can Hear the Mountain @ Gooden Gallery, 25A Vyner St – Cambridge Heath

Della Gooden, who has only recently adopted a more upfront name for her former VINEspace, gives Simon Morse his third show in three years. He has moved in that time from perfect two-dimensional imaginings of control panels for comically-purposed machines towards actually making them in more visibly-used forms which suggest relics recently stranded in the march towards ever-more sophisticated computerisation. Extra buttons, switches, labels and instructions are added to the found items, and their edge-of-sense titles – ‘A Few Tricks I Can Do With a Knife’, ‘Welt Stable’, ‘What Cannot Henceforth Be Yet Unhenced’ – could be swapped between works without much changing their wacky slant on pseudo-functionality. I was reminded of how the banking system can appear: an absurdly-mislabelled farrago of apparent controls which connects to nothing in the way it claims. 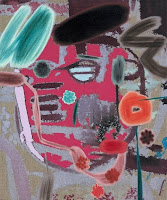 There’s an eighties tinge to Dan Perfect’s work – the obvious influence is Basquiat – but why not? This illustration of the recessionary trend towards longer-running shows provides a helpful reminder of the big paintings teeming with totemic suggestions which characterised Perfect’s appearance at the Chisenhale two years ago. But the focus is on a sort of letterless alphabet, in which 26 head-sized near-abstractions exploit our instinct for finding a face by evoking an A-Z of dæmons plucked from a wide range of cultures: ‘Head (Amaethon)’ through to ‘Head (Zadkiel)’ via Furfur, Qadesh and Ungud. They could be out-crops from the big works, but with their hues ramped up and their marks hazed by Perfect’s process of digitally manipulating and computer-colouring drawings before painting the dæmons themselves from low resolution print-outs. A ‘Grimoire Perfectorium’ says the nice little book of the show.

Don’t turn up at the weekend, by the way, and don’t confuse with ‘Demonology’, a coincidentally-timed group show at Charlie Smith! That may not be Perfect, but does contain a wonderful new painting by John Stark…

The dystopian side of the modern is very much a la mode, but the wide-ranging Swiss artist Uriel Orlow’s beautifully doomy first London solo show is convincingly grounded in a sense of how the future will never escape its pasts. We see a half hour video exploration of Mush, an Armenian housing project near the site of the 1915 genocides which was left unfinished when the Soviets withdrew and which Orlow sees as ‘ruins in reverse, oscillating between the not-yet and the no-longer’. It is shown to a soundtrack of dying stars, sounds which of course we detect long after the stars have vanished. There are also drawings made by tracing the mass-produced ceramic deathmasks which were a curious Russian tradition well into the photographic age, and stare as blankly as the unfinished houses’ windows; and photographs of an abandoned textile factory suggesting that society’s threads will not be pulled together any time soon. Enjoy…

The Irish artist John Gerrard made a big impact with his collateral event at the Venice Biennale last year, and this is the first London showing for his realtime 3D animations. They use video gaming technology to make silent virtual reality versions of scenes which unfold over long periods. Two are shown large scale here: 'Sow Farm (near Libby, Oklahoma)', which recreates an unmanned, computer-controlled agricultural complex, and 'Lufkin (near Hugo, Colorado)', showing an oil derrick. Both circle round over a full year of changing light to produce a hyper-real yet oddly artificial portrait – neither documentary nor fiction, somehow, but a real form of the virtual – which matches the distanced and exploitative relationships between man and nature which they depict. The effect is at once painterly, cinematic and disturbingly clinical. In addition, ‘Oil Stick Work’, in which it takes a man thirty years to paint a silo with an oil stick until it becomes completely blackened – will soon be on view at Canary Wharf underground station over the full third year of its running, due to finish in 2038.

Stills from 'Whose Toes'

To 14 March: www.drawingroom.org.uk - ‘Whose Toes’ can also be seen at www.barrydoupe.ca

Europe’s only public gallery dedicated to drawing presents eight practitioners using animated forms. The show is named for the pleasingly low-tech means employed and the shudder as an intense response, but I was most taken by two artist who employ different strategies of disjuncture between sound and image. Raymond Pettibon is best known for captioned ink drawings, but I found the combination enhanced by his giving voice to the deadpan multiple-register commentaries in ‘Sunday Night Saturday Morning’. The much less famous young Canadian Barry Doupé brings the look of an out-of-focus video game to the mesmerising half hour computer animation ‘Whose Toes’, in which characters and events recur in a dizzying pattern of apparently violent near-narratives to the sound of the dialogue reduced to a hissing static. You are cast as a voyeur who can’t quite see or hear properly a stream such as swans, lifts, Princess Diana, a riderless motorbike, danced-around scissors, JFK and a glory hole... 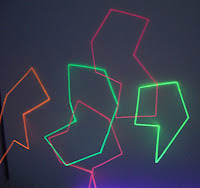 Young Anglo-Bangladeshi sculptor Rana Begum is best known for modular aluminium wallworks, which reveal intense colour effects in a fresh take on minimalism infected by Islamic abstraction and modern architecture. This show consists of just one multi-part work, ‘No. 207’, which emerged from a residency in Beirut. It plays that city’s vibrant nightlife off against the Delfina’s quiet spaces in a two-floor installation of neon tubes and geometrically-arranged plastic straws rendered fluorescent by ultraviolet light. This makes for an alluring new language, as if Dan Flavin has been reinvented for the nightclub and the playroom simultaneously. 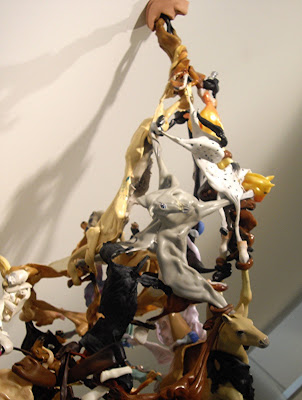 Ilona Orel’s very well-appointed gallery usually shows Russian artists, though Stephen j Shanabrook is an American with a Russian wife. Works made from prescription pill bottles and scalpel blades which draw parallels between drugs and religion may make you wonder whether Damien Hirst isn’t better left to pastiche himself, even though they pack a punch and Shanabrook has previous: he’s an ex-addict whose father was an obstetrician. I was more struck by his use of oven-melted toy horses, knitted together into chains which spill from a mouth on the wall to add a more original and macabre childhood twist to one aspect of addiction – and referring in passing to the one-way nature of horses’ throats: they can’t vomit and so are particularly susceptible to poisons. 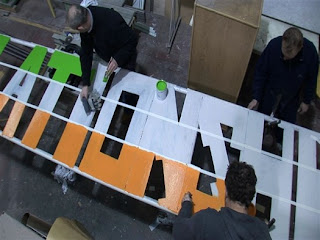 Yinka Shonibare’s admirable project invites curators to propose shows in his space. Ali MacGilp and Cassandra Needham successfully suggested examining the hostile process whereby people absolve themselves from responsibility by moving blame towards another person or group. This strong and tightly interrelated show provides a nuanced view of the individual attitudes and social factors at work. Among the highlights are Jacek Niegoda’s examination of what happens when a man sets himself apart by walking on the spot up a down escalator and a new video from the normally confrontational but here winningly gentle Pole Artur Zmijewski, who invited immigrant Polish and unemployed Irish people to work together in Dublin to build sculptural monuments to cooperation. And if you have four hours free you can watch all of Rod Dickinson’s restaging of the infamous Milgram experiments, which sought to show how people would follow orders to administer pain: the experiments’ scientifically dubious artificiality is highlighted by the fact that, although all the participants are acting for Dickinson, that’s only one more actor than in the original. 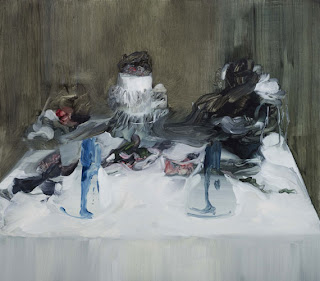 Viana, a Brazilian who has lived in London for 25 years, is a late developer whose first solo show of intimately-scaled paintings is well-suited to Domo’s warm space. They show interiors with commonplace art historical subjects such as figures, mirrors and still lives on tabletops. These are filtered through secondary sources – photographic, decorative or ceramic – and depicted with an increasingly confident mixture of baroque flourish and crisp precision. It’s as if a mind is attempting to reconstruct a past time which had more certainties in it. Make sure to catch the delicately pared-back watercolours hidden behind a door…