THE FUN OF THE FAIR IN BRUSSELS 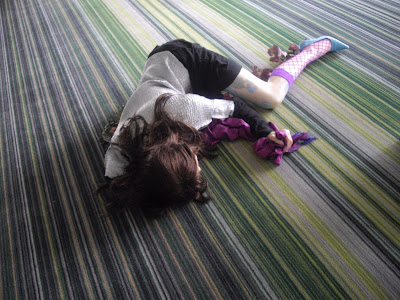 Brussels is just two Eurostar hours from London, and its Art Fair (23-26 April) made for a relaxed and high quality visit. Some 170 galleries showed in two spacious and easily-navigated halls, and while volcano ash problems prevented some of the more distant would-be-participants from making it, the mix was still good. The supplementary programme of special shows, performances and events was also sensible in scale and well-vetted. The more striking interventions were a ten room installation of different smells by Peter de Cupere and the daily sight, courtesy of Emilia Lopéz-Mechero, of several construction workers attempting to connect everything up by carrying round a 15 metre section of piping – yes, the layout was spacious, but this was an awkward enough action to emphasise that it really was a pipe. Talking of which, the very popular new Magritte Museum was among the institutions which joined in; and the commercial galleries, many of which are impressively large, opened until ten on Friday night. There were also two subsidiary hotel-based fairs, patchier in quality but of some interest. In fact, the figure above, courtesy of Jemima Brown, rather appropriately greeted me at the Trajector Fair on the Sunday morning after the excellent Saturday night art parties. Jemima, acting as artist and excellent curator of a room for the weekend, cunningly exploits our tendency to fill in gaps so that it's surprisingly easy it is not to notice that one leg is made of by flowers, so wasted is her mannequin character...

If there was an overall bias it was perhaps towards the painterly but thoughtful abstraction which the Belgians - and many of the 40-odd Belgian galleries present- seem to like, but it was hard to identify any particular trends. As for the specifically Belgian flavour, I didn’t see a single Tuymans painting: the most prominent Belgians were Jean-Luc Moerman, whose abstract swirls derived from his tattoo-orientated work covered the Fair’s catalogue and bag; and Wim Delvoye, shown by no fewer than seven of the galleries present. Gallerists reported measured but positive responses from collectors, and the content of their stands was balanced, too.

The whole Fair put me a in a good mood, then, and perhaps that’s why I found myself drawn towards several works which were upbeat, if not downright jolly (though lots I liked didn't fit, of course, eg at Boltelang, Feinkost, Perrotin, Esther Schipper and Sorry We're Closed, to stick to impressive non-British galleries). That set me musing on how, while in literature it is a commonplace that happiness tends to ‘write white’, there seems less of a parallel problem in visual art. Anyway, without pretending it was a statistical trend throughout the fair as a whole, here are eight works which impressed me with both quality and good humour – which isn’t to say they weren’t serious, and some indeed are quite morbid beneath the surface. 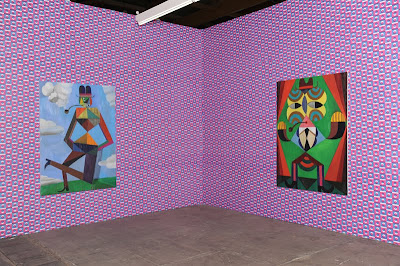 Three galleries showed the German artist Christoph Ruckhäberle to advantage, the stand-out being Brussels/Paris/London based Sutton Lane, whose booth consisted of three big untitled works against a zingy wallpaper of Ruckhäberle’s own design, thus ramping up his predilection for bright patternings within the paintings. His people seem to be playing at being Picasso paintings, with primitive, carnivalesque and op art influences also thrown in to construct stylized persona which combine the abstract and representational to fairly fizz with theatrical effect. 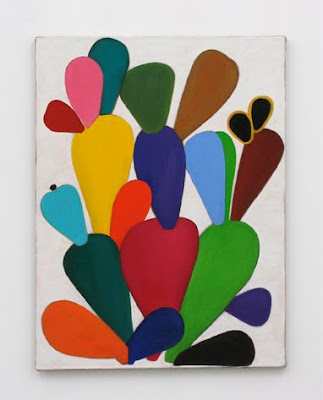 How happy can an abstract painting be? Objectively, perhaps, not at all – but subjectively I fell instantly for the cheerful vibe of Belgian artist Ruth van Haren Noman’s ‘Polychrome’, thinking it just such an abstract. Then I realised, looking more closely and reading back through her previous work, that she starts from plant forms and this was actually a cactus. So how happy can a cactus be? That might sound an odd question, too, but one of my favourite paintings in Ryan Mosley's recent London show was called… ‘The Happy Catcus’. So maybe there is an evidence base building up. 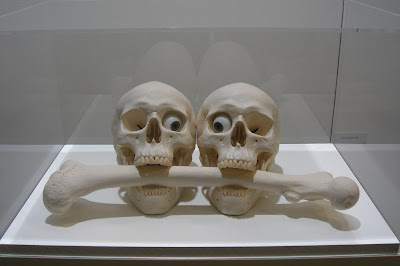 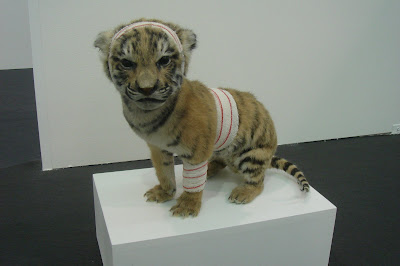 There may well be a case to be made for an art moratorium on skulls and bones, so often have they featured in recent years. But rarely are they quite as entertaining as young Belgian artist Pascal Bernier’s pair of skulls apparently scrapping over a bone, one remnant eye in each mad with jealous desire. The bone stands in for the afterlife, as if getting to heaven is just another market-driven process with limited supply. I also enjoyed his sculpture of a lion bandaged with ‘hunting wounds’, so undermining the world-be perfect world of the soft toy. 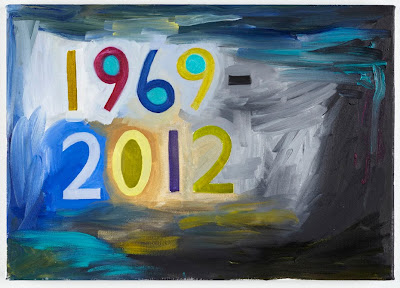 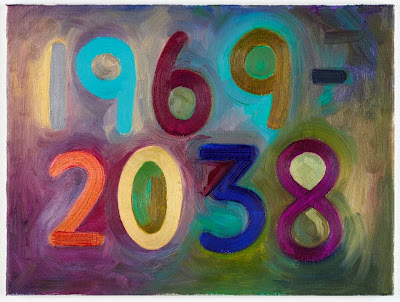 Talking of death (and how did that get into this list so much?), arch-conceptualist Jonathan Monk had several from a new series of twelve paintings at Copenhagen’s Wallner Gallery, all of which present his date of birth with possible death dates to match in a spin-off from Alighiero e Boetti. That for 2012 was smallest and darkest, but most were cheerfully colourful and expressive, and tended to get bigger as Monk’s putative lifespan increased. Despite giving me pause to check that, no, I wouldn’t want to know my own death date however good that would be for planning purposes, I enjoyed the mixture of the ludicrous and the self-mocking in the idea of producing such alternative memorials in advance. 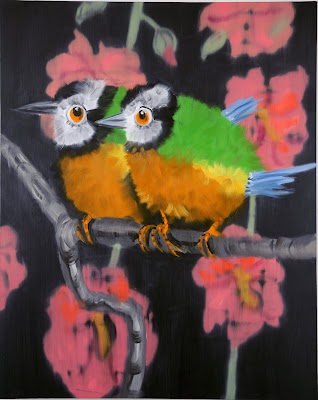 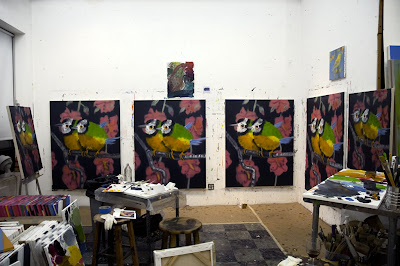 Ann Craven: A 'Puff puff' @ Conduits, Milan - together with a studio view of their production

American artist Ann Craven paints large series of generic subjects such as birds, flowers and moons which explore near-repetition and the boundaries between knowing and kitsch, beautiful and ugly। The emphasis falls on colour and expression, as if they are abstracts which just happen to depict something (and, indeed, Craven does also paint stripes). Conduits showed two of the seven ‘Puff Puff’ paintings of absurdly big (1.5m high) and cheerfully attention-grabbing baby birds. The studio shot gives an idea of the multiple production, complete with standardised palletes on display. 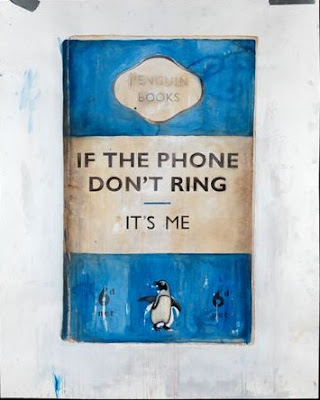 A good joke does no harm, and internationally-based English writer-artist Harland Miller provided several ahead of a full show and book due in the autumn at Amsterdam’s Reflex. Miller is known for his far larger-than-life paintings of classic book covers, given a painterly twist by riffing on colour field abstraction and a quirky spin by his invented titles. In this particular watercolour, the penguin, which varies between paintings, looks unusually jolly and I liked the mordant twist to the joke as a reductio ad absurdum of the consequences of inaction. 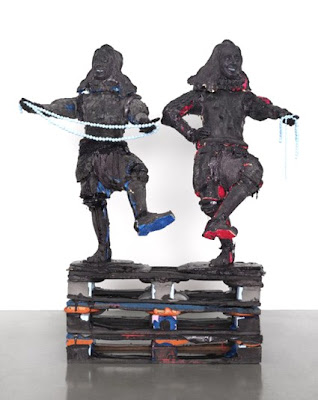 The Amsterdam sculptor of tableaux, Folkert de Jong, showed a group of pirates in his distinctive and somewhat macabre language using industrial Styrofoam and pigmented Polyurethane insulation foam. They were dancing and strutting on top of what looked half like wine barrels, half like anachronistic oil barrels. No doubt there were messages to be read about greed, immorality and the nature of trade in our modern economy, and about how nation states attempt to control matters now as opposed to 400 years ago – but with their ramshackle forms, barter-ready bright blue necklaces and gunpowder round their own necks, these pirates were also immense fun.

Sofia Hultén: still from ‘Fuck it Up and Start Again’(2001) @ Meessen de Clercq

Berlin-based Swede Sofia Hultén isn’t one to let the world be. She either tries to make it (or herself in several amusing videos) disappear, or is equally tempted by smashing and repairing things. And that’s what she does, rather satisfyingly, to a guitar in the video piece ‘Fuck it Up and Start Again’: smash it, then repair it – seven times in different ways. A parody of rock star theatrics combines with a determination to put the world to rights, even knowing that you might undermine your own efforts. Meessen de Clercq's gallery, incidentally, was the best I reached, fitting in Jannis Kounellis, Martin Vanden Eyende and young British artist Damien Roach across three floors - and Roach had three large rooms in each of which he showed similar but subtly different content.