This selection ranges widely: to Peru to Haiti for combinations of Catholic and indigenous traditions, to some of the less-travelled zones of contemporary humanity through Marc Quinn and various others, to ways of looking at the past in Rachel Thorlby and Alex Hudson's work. And there could have been more: I haven't included the weirdly tender world of Miroslav Tichy's obsessive photography at Michael Hoppen; the great British Museum show of renaissance drawings; or Bill Fontana's River Soundings, which immerse you in the soundscape of the Thames while you get to see the subterranean spaces of Somerset House - but those, too, are stimulating explorations of people, time and space. And you can range with me at the Anita Zabludowicz collection on 6 June... 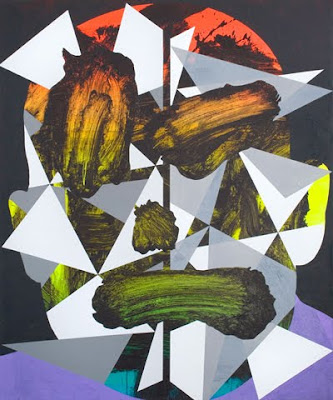 The Library of Babel / In and Out of Place @ 176 Zabludowicz Collection, 176 Prince of Wales Road - Chalk Farm

This salon-style hang gives an A-Z of Anita Zabludowicz through 217 works by 167 artists, representing around 10% of her collection. The idea is that visitors - and guest tour leaders - can make their own connections to devise a route around this lively cross-section of recent trends. The good news, if you haven't been yet, is that the show has been extended by a month, to 13 June. And whether you've seen it or not, I should mention that I will be leading a tour of my selection of works on Sunday 6 June at 3pm, under the theme title 'Hidden in Full View'. Luke Rudolf's up-to-the-minute abstraction of a face - similar works are in his current show at Kate MacGarry, which is excellent - will be one of them. Allow for bias if you will, but I recommend it - and it's free! 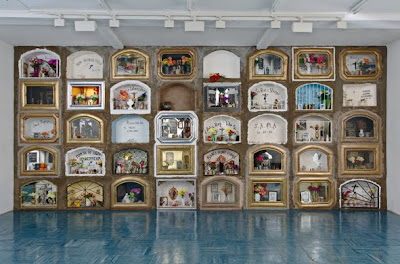 The artist-run Civic Room, tucked away halfway up Kingsland Road, has a high quality programme. Here Ximena Garrido-Lecca, who came to London as a student a decade ago, returns for inspiration to her native Peru. She gives us not work about death, so much as death direct. She has acquired the items to convincingly reproduce an anthology of 40 nichos – stacked cemetery chambers in which the dead are placed, each fronted by a space in which they are memorialized. The contents vary from bareness to kitschy excess depending on what the families can afford, and there is also a mix of real and artificial flowers just as in the Cuzco originals. That results in an overall rhythm which pitches minimalism against the baroque, as well as luring the viewer, chamber-by-chamber, into the detail of a hybrid of Catholic and Pagan iconography. Furthermore, while many of the nichos are celebratory rather than mournful, it’s hard not to think of the political violence in recent Peruvian history, and how many more deaths the 40 tombs might stand in for. 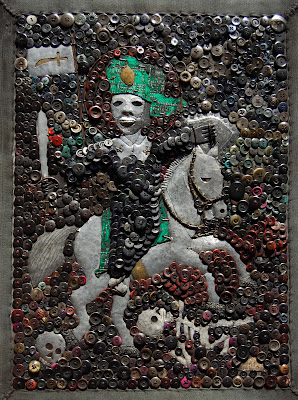 The four floors of the recently-established Edel Assanti project space, two hundred yards towards the Thames from Victoria station, make for a lively visit. On the second floor Australian gallerist Jack Bell, who sources art from around the world, presents recent but pre-quake contemporary art from Haiti. The aesthetic is part Catholic, larger part Voodou. Four Port au Prince artists are featured: sculptors André Eugene, Celeur and Guyodo; and Lherrison, who re-interprets traditional Voodou flags. They use whatever they can get their hands on - hundreds of buttons; bits of computer chipboard; refuse sacks; and high-heeled shoes (rather uselessly sent as aid by the US) play their roles in updating the Voodou tradition. So it is that rubbish from the west is sent back as art. There are also three interesting floors of Asian and European work on show from Bright Treasure Art Projects, chosen by Korean curator Heejin No for their alchemical themes. The highlights are Meekyoung Shin’s vases made from soap and Jang-oh Hong’s diamond of empty Perspex ring boxes.

Long Lost in the Forgetfulness of the Forgotten II

Rachel Thorlby’s superb second solo show sees her engage with the past through landscapes, enthroned figures and portraits. She creates dialogues across time and art forms by moving fluently between the two and three-dimensional, the grand and the humble, permanent motifs and less permanent materials, the fragmentary and the unfinished. That rich set of resonances is set up by three contrastingly-vandalized busts; two large sculptures which might be called sketches for would-be monuments; a landscape objectified in a box; and a series of collages which reflect on our idealisation of landscapes by combining stock images for travel brochures in such a way that they incorporate and yet smother classical figures in a remarkably economical conjunction of geological, historical and contemporary time.

See www.madder139.com/files/biogs/interview.pdf for my interview with Rachel.

Following a short-lived dalliance with Gagosian as his London dealer, the hyper-inventive American sculptor Tom Friedman has returned to Stephen Friedman (not that they’re related!) for his fourth exhibition there in fourteen years. Friedman lurks modestly at the back while Steve Wolfe takes the front space. His five new works are something of a tour de force in the use of Styrofoam, which isn’t the obvious material for realist sculpture but is - along with paint - all that is used in a series of five eccentric still life set-ups. They appear to include pizza, cardboard tubes, a cinder block, flowers, toothpicks, plywood, bones, string, a towel dispenser and even a fake-yet-real Styrofoam crate. By Styrofoam, incidentally, I mean the sky blue extruded polystyrene which resists moisture and is valued for its properties of insulation and buoyancy, as opposed to the white foam used in disposable coffee cups (with which Friedman also has a history, and which he does indeed imitate here with Styrofoam). The world, I conclude, is full of possibilities, for if everything could be made of Styrofoam, then what isn’t feasible? 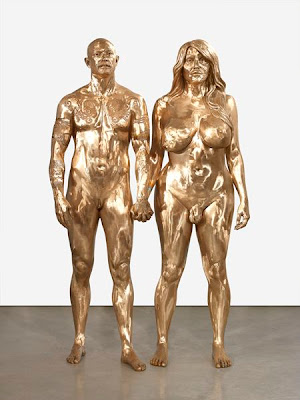 The blood heads and frozen flowers aside, I’ve tended to find Marc Quinn’s work a little too… well, ‘crass’ would be a harsh word, but it’s the one which comes to mind. Now, though, he has produced a body of work in which that tendency chimes with the content and his paintings of sexualised flowers fit well as a backdrop. The core of the show is a group of life-sized and bigger sculptures which carry forward Quinn’s theme of democratizing classical sculpture to include the full range of body types, but also gain much of their impact from being found in a gallery rather than on some corner of the internet. They feature people who have modified their bodies in sufficiently extreme ways that Pamela Anderson, presented in a lacquer-covered bronze which catches just the right tackiness, looks decidedly natural. Come see the pregnant man, the varieties of surgical sex change, the cat-man, the implausible breasts of Chelsea Charms. So, are these people now more or less their own true selves? Do the results speak of saddening personality disorders or adventurous creative acts? And can the same question be asked of Quinn for putting them on display here? Crassness, perhaps – but with a thought-provoking edge. 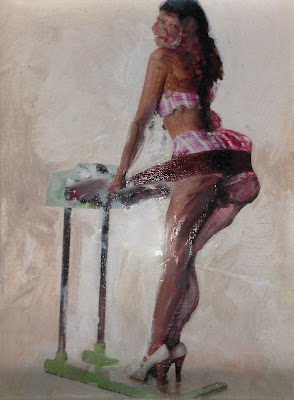 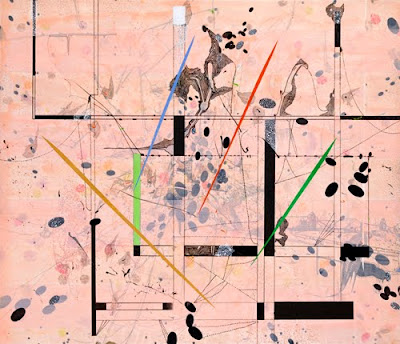 Andrew Mummery & Wolfram Schnelle’s artists are generally quiet: the only thing likely to be in your face is process. And that can be good, as the well-coordinated pairing of Emma McNally’s intricate graphite drawings with Graeme Todd’s drawing-like paintings exemplifies. Todd mixes abstract and figurative, paint and ink, plywood and MDF in paintings inspired – as the Brian Eno reference of ‘Blank Frank’ indicates – by electronic music. The devices are muted: Fontana-style slashes, but painted; drugs stuck on to indicate altered states in Fred Tomasselli’s manner, but they’re scarcely-noticeable poppy seeds, even though the title 'Abstract Nympho' seems to have strayed in from the preceding trendline. Perhaps the quiet is in tune with Eno’s approach being gentler than his American peers’. McNally’s rhythmic works look at least as musical as Todd’s, but the waves in them turn out to be inspired by the physics of bubble chambers, which then do the micro-macro thing – rather as Todd does – by suggesting planetary activity. I was sorry, though, that ‘Here Come the Warm Jets’ wasn’t playing in the gallery… 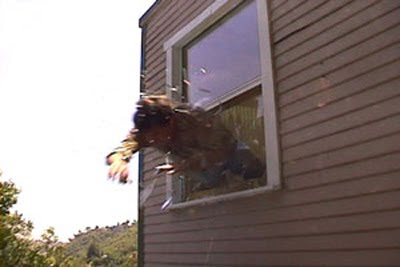 This feels like enough material for three shows packed into the three compact floors of Hilary Crisp’s gallery by artist Graham Hudson – and they’re all good! First, it’s an installation by Graham of a 50m tape measure which sneaks cunningly up, down and around to connect the other 30 artists in the show, literally as well as curatorially: they all play off geometric themes in some way. Second, it’s a wide and lively range of other work from an eclectic London-LA mix from promising RCA and Slade students through to such respected names as James Ireland and Eloise Hawser. Third, it’s a concise video and sound exhibition which gives each floor a distinct atmosphere and presents three engagingly witty videos: Nico Vascellari’s ‘Untitled (Song)’ which records a literal drum roll, ie down a hill, making curves and alternative drum noises; Samuel Williams’ ‘Rubber Band’, in which a sculpture is buffeted by said band being flicked at it; and Joe Sola’s ‘Studio Visit’, in which the arcs are those of the artist suddenly diving through his studio window as he disrupts explanations of his practice to a succession of visitors – to reactions ranging from laughter to concern to indifference. And that’s not to mention the sculpture roof… 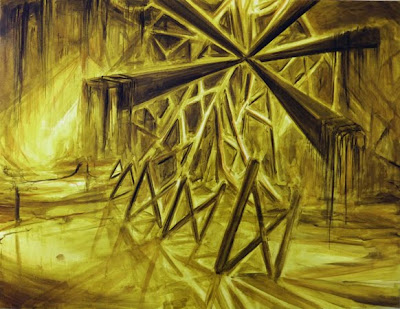 Passing seamlessly from one Hudson to another, young British artist Alex Hudson shows a dozen distinctive and richly ambiguous paintings which contrast nature with artificial constructions. Three are small black and white paintings which foreground mysterious, possibly transcendental, geometric forms which slice into landscapes redolent of classical painting - as if Poussin’s mythological action had been replaced by a dream of the modernism to come. The others, newer to Hudson’s practice, are larger views incorporating, or sometimes apparently contained within, fragmentary and presumably failing constructions. There is a less spiritual, more apocalyptic feel to these, emphasised by their colour, which plays off a potentially nostalgic sienna against a toxic yellow. It’s as if we are looking back from the future at what came of our present systems. We find ourselves asking both where man’s relations to nature have come from and where they are headed.

See Vegas news page www.vegasgallery.co.uk/wp-content/uploads/2010/05/interview.jpg for my interview with Alex 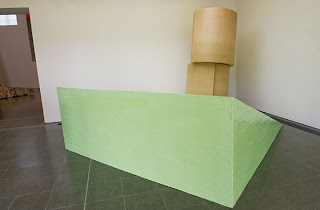 New Tour Feature: People often ask me what I would recommend as an afternoon’s tour of current exhibitions. Right now, you can cover a lot of stimulating ground through four impressive installations easily accessed along the Piccadilly and Hammersmith & Fulham tube lines. From west to east they are the sculptural face-off between street-rough Phyllida Barlow and penthouse-sleek Nairy Baghramain at the Serpentine; Jannis Kounellis at Ambika/P3; Céleste Boursier-Mougenot at the Barbican (though that closes soon: replace as necessary with Michael Samuels @ Rokeby) and Martin Honert @ Bloomberg.