A GROUP SHOW BY OTHER MEANS

There are many summer group shows on now, but a whole group of group show reviews would not, I think, be such an appealing prospect. It's more fun to choose some interesting works - and by way of contrast the one piece in a one piece show at the ICA - to form a 'group show by other means'. 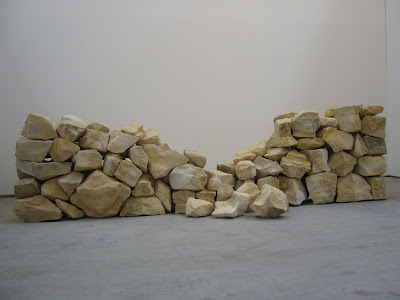 Rupert Norfolk was the artist least familiar to me who impressed in 'Newspeak', Saatchi's 29-strong survey of recent British art. I thought he, Karla Black, William Daniels, Sigrid Holmwood, Peter Peri and Ryan Mosley came across particularly well. Norfolk showed three cunningly deceptive sculptures: one with fake shadows, one with fake contours, and one – ‘Wall’ – with a fake lack of order. What looks like a dry stone wall which has tumbled at a point of breach is, on closer inspection, exactingly symmetrical: one side of each rock has been carved to mimic the natural form of the other, unaltered, side. It could represent no more than how the best-laid plans may fall through, but I was also reminded of the meticulous detail which goes into planning what may look like an arbitrary act of terrorist violence. 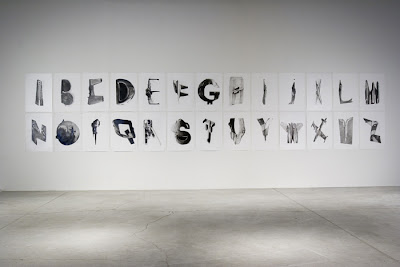 There’s something of a Fiona Banner military moment going on just now. The South London Gallery’s show of wall works highlighting its expanded space includes Banner’s extensive war film narrative ‘Black Hawk Down’. Tate Britain’s Duveens Hall spectacularly features her two jet fighter planes as found sculptures of a diving harrier and a crouching jaguar, returning the planes to the macho animalism of their names. And the Frith Street Gallery's excellent summer show features the 2006-07 graphite alphabet of letters made from mashed-up planes in which, says Banner, ‘each letter is like a primitive weapon, each designed to be hurled. These weapons only exist because we can’t communicate, because of the failure of language. I suppose The Bastard Word is a kind of anti-alphabet, or anti-language.’ 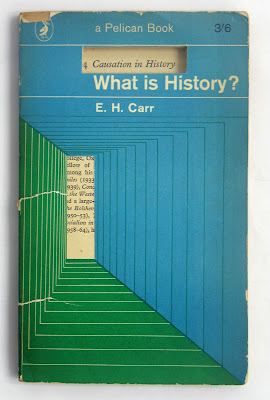 Two of the lively five floors of this project space are given over to a complex curated group show of works which spin off an interesting-sounding novel by Michelle Bernstein to explore ‘recollective memory and interpretative allegory’. Among them is a large selection from Adam Thomas’s ongoing series ‘Free Fall’, which simultaneously reveals and deconstructs the authoritatively-regarded knowledge contained in the Pelican books from the late 50's to early 70's. Thomas’s collage-by-removal technique also suggests what lies beneath some of the social changes we can now see have come about since the books were published. Aesthetically, too, the series plays off the classic cover designs at the same time as subverting them in a rather appealing 'have your cake and eat it' manner. 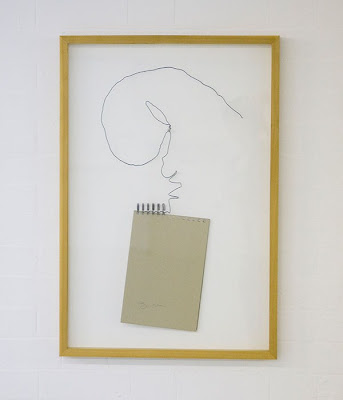 Waterside Projects currently has a typically well presented and documented show themed around the re-working of accepted forms to demonstrate their boundaries. Amikam Toren is perhaps best known for cutting words out of found amateur paintings to construct conceptual commentaries. Here, too, he finds a use for what might otherwise have been thrown away. Each time the London-based Israeli artist finishes a sketchbook, he makes a semi-sculptural form - which also constitutes one last drawing - out of the book’s wire and cardboard supports. The bent wire stands in for the mark on paper, and the ‘last drawing’ implies the history of all the sketches made in the book. You could call it a performance sculpture of sorts… 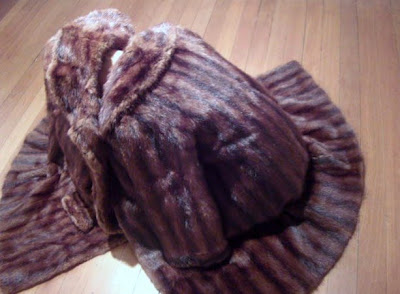 This is definitely a performance sculpture. Leah Capaldi plays off the frequent use of life-like mannequins in recent art to present a woman – who turns out to be real – crouched beneath two fur coats with just the very vulnerable-looking nape of her neck exposed: a sort of trompe l’oeil in reverse. Homelessness, execution and primitive ritual come to mind in this power-play, as well as the classical reference of the title: the peplos was a sleeveless garment worn in ancient Greece. The work comes from Capaldi’s RCA degree show, which also featured more visceral versions of the person as sculpture. Here it’s the highlight of an interesting survey of new graduates’ work – though following the opening you will have to bring your imagination to just the coats on the floor, ready for 'action'. 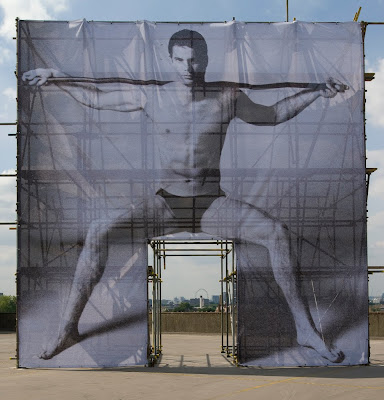 The disused top two floors of the multi-storey car park opposite Peckham Rye train station host 15 sculptors - along with impressive views and a rooftop bar - in the fourth annual event arranged by Hannah Barry. Anthea Hamilton’s vast Atlas-like figure makes the most striking use of the location. 25 feet tall without even standing up straight, he might have escaped from Hamilton’s previous gymnasium-themed installations to the great outdoors. Punnily enough, Aquarius seems to hold up some of his own scaffolding while the London Eye – and by evening the sun – appear between his legs. I guess it is the sun’s role which is referred to by the title, given that we are in the astrological ‘Age of Aquarius’. That used to be seen as the harbinger of new values: this work may be an ironic acknowledgement of how dated those hopes have become. 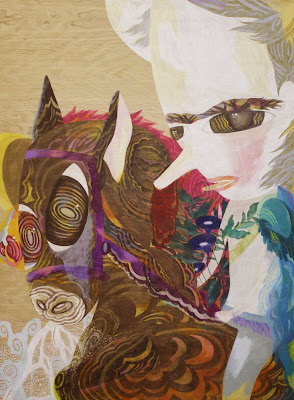 Maddox Arts' attractive summer show asks four European-based Japanese artists to respond to a star festival myth in which the Weaver Star princess neglects her duties at the loom for love of the Shepherd Star, whose animals are similarly allowed to stray. As punishment, they are separated by the Gods on all but one day each year. The artists' responses are mostly oblique: Kengo Kito provides versions of the cloth; Kounosuke Kawakami gives us the post-industrial landscapes by which he imagines them separated; Emi Miyashita's drawings combine flag-waving state ceremonial with the worship of the breast – perhaps exposing the Freudian undercurrents of the tale. Kentaro Kobuke comes closest to showing the characters directly. That aside, his scribbled pencil on cherry wood technique, as in Uma No Me (Horse's Eyes), at once suggests childhood experience and paths through the legends associated with Japan’s most famous tree. 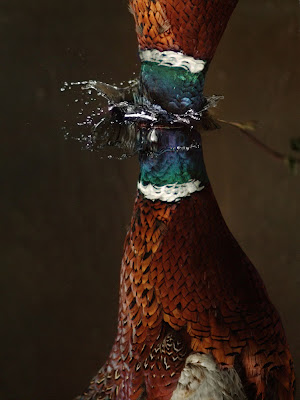 Man & Eve have moved to project-friendly new premises halfway between Vauxhall and Kennington tube stations. This neatly-conceived show considers the freestyle ‘DJ mix’ use of appropriation from pre-modern art. The highlight is one of London-based Israeli photographer Ori Gersht’s set of three short films which provide violent but beautiful re-imaginings of classical still life paintings: shot fruit, exploding flowers, and this dead pheasant from Chardin falling at one minute per realtime second into a dark pool of water. At first the bird hanging with grapes (real ones,
but cunningly lit to look like painted grapes) looks like an image of a painting. But it ‘comes to life’ once cut free, falling with matching slowed-down liquid sounds and hyper-detailed splashes, and we see that the feathers dislodged are real. It’s riveting – and funny: a poke, surely, at Bill Viola, whose application of similar techniques to diving and rising people makes a melodramatic meal out of what is already implied by a vanitas still life.

It’s a badge of art world cool to dismiss the biggest group show of all, but just how bad is the RA Summer Show? It depends I think how sensitive you are to a painting’s surroundings, for there is generally a good small show there, hidden inside – or, if you can’t make the visual separation, drowned out by – a big bad show. This year is no exception. Fiona Rae has turned Room V into an excellent show within the show, and elsewhere I felt there was a good survey of abstraction available. I would point to Bert Irvin and Frank Bowling in Room I, Jane Harris and Sean Scully in Room II, Ian Davenport and Danny Rolph in the print room, Mali Morris in the super-crowded small Weston Room, Callum Innes in Room VI, five by Tess Jaray in Room VII, and Alexis Harding in Room X as well as much of Room V. I concede, though, that you have to traverse Anthony Green, Jeffery Camp, Adrian Berg and lots of the the weirdly overrated recent work by Gillian Ayres. The large, enigmatic 'Divine' is from French-based baroque minimalist Jane Harris's fairly recent move towards metallic pigments. They add a semi-reflective lustre to the restrained seductions of her eliptoid play with the effects of light on subtly modulated surfaces. 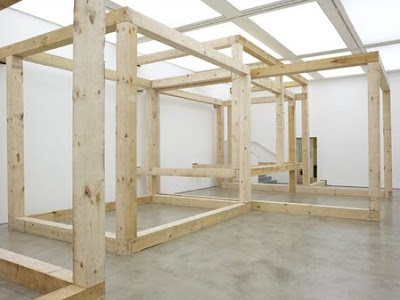 It’s tempting to interpret everything at the ICA as a product of its beleaguered financial state: fewer staff, reduced opening hours, closed lavatories, the upper galleries not in use… Is it a coincidence, then, that the Paris-based American’s intervention – which looks like a hybrid of Carl Andre and Sol LeWitt - is a bit too big for the available space, as if without the budget for major reconfiguration, there was no choice but to let it penetrate the walls? I presume so, as Tuazon says that ‘ideas don’t have a place in sculpture – I just go to work’; and besides, he has previously made comparable interventions which he characterises as ‘two structures fucking each other’. He makes them on site, but they’re not so much site-specific as site-denying, imposing their will on the building. All the same, the abstract violence of his big, wild minimalism seems appropriate and successful, even if Tuazon calls it ‘My Mistake’.

The Future: I'll list a selection of the many September openings next time.
Posted by Paul Carey-Kent at 08:08