Collage techniques seem more relevant than ever given today’s teeming overload of information. Film collages have been prominent of late: Oliver Pietsch runs to the end of January at Nettie Horn, and Christian Marclay’s 24 hour ‘Clock’ reappears shortly at the Hayward. There are several other collage methods in my choices for February: straight photo collage, neon collaged onto postcards, paintings made after collages, the effect of ‘decollage’ on layered posters, even the collaging of thirty exhibitions into one... 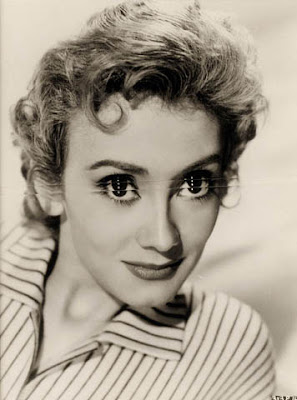 John Stezaker has moved from marginal cult figure to recipient of his first public gallery retrospective in the five years since he retired from full-time teaching: not so much by changing what he does in his series of collages, many of which have years of pedigree, so much as by being able to show more. His primary, and influential, thrust is to make us look differently at old images by changing their combinations or contexts. Thus film publicity stills gain a fresh yet troubling allure through the imposition of surprisingly face-mimicking postcards of caves, or two characters are 'married' in freakish combinations, while others eerily duplicate themselves. 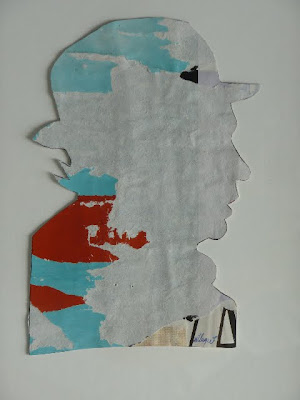 Jacques Villéglé: Trajectoire Urbaine @ Alexia Goethe Gallery, 7 Dover Street - Central
11 Feb - 25 March: www.alexiagoethegallery.com
The veteran (born 1926) but still active French affichiste flaneur of the lacéré anonyme is known for his exploitation of the poetics – and politics – of urban decay and unknown intervention through the medium of ripped posters. One advantage, as he says, is that ‘the whole world makes work for me — I only have to collect it’. Actually, as I found in his 2008 Pompidou retrospective, his work is more varied than might be expected, and this selection across thirty years is a welcome chance to see that demonstrated this side of the channel. 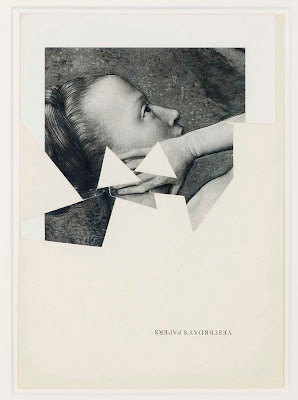 This group show is perhaps best seen as a new work by Simon Starling, who has selected 27 artists who have previously shown at Camden with the forbidding constraints that their works themselves deal with our understanding of time, and that they be installed exactly where they were previously displayed (not that my memory was up to checking much). To these he has added the ‘possible futures’ of three artists new to the venue. The resulting temporal cacophony may - inevitably but intentionally - look rather odd, but aside from the time collage aspect, there are some interesting works and dialogues here. 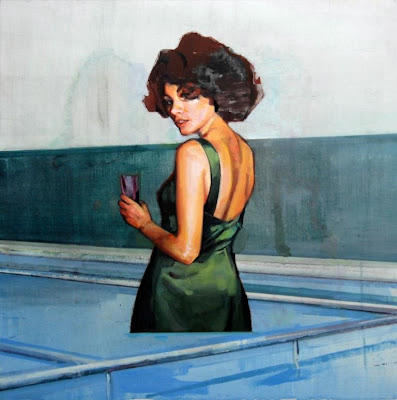 Andrew Hollis’ latest paintings are derived from photographs taken from 1960’s –
70’s encyclopedias. They work through a surrealist-tinged edginess of unexpected juxtapositions, and by echoing the modern – sceptical – reception of photography: they set up parallels with both the diminishing claims to authority of printed encyclopedias, increasingly less-used in the internet age; and with how their information becomes marooned in time, with its own future uselessness built in. The results are complex voyages through the history of how images are constructed and perceived. 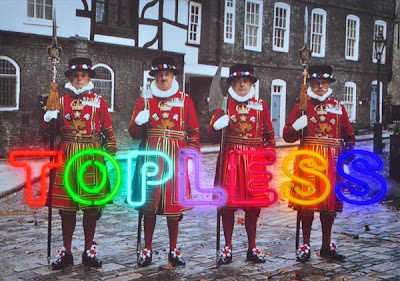 There’s a zingy feel-good factor to the Carters’ fourteen conjunctions of reduced-size recreations of vintage neon signs (found on casinos, diners, motels etc) on top of quaintly kitsch 60’s-70’s postcards blown up to six feet wide. This meeting in the middle of scales and places also gains from the contrasts between flat and sculptural and between types of artificial colour. Add a double dose of nostalgia and some wit in combining the paired elements in ways which elude exact logic but tend towards the cheerfully sexual and it’s possible to see why this show shines where Gilbert & George’s extensive sex ‘n’ postcard combo at nearby White Cube fall rather glumly flat. 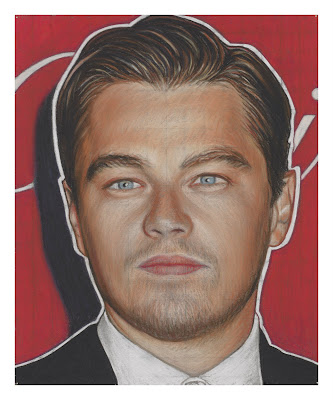 American Richard Phillips' big, lush, hyper yet unreal oils bring traditional Venetian techniques to pop cultural icons who seem to teeter between on the one hand embodying the desires teased at by their self-publicity, and on the other hand being exposed as dead ends in a morally vacuous society. Where pop art celebrated consumerism, Phillips’ take is more ambiguous. He shows ten celebrities deemed 'the most wanted' in contemporary US society, and captured in maximum commodity mode, ie in front of logo-covered posing backdrops. Small pastels upstairs, squared up for trasnfer to the big paintigs below.For those as unhip as me, it may also lead to such questions as ‘Who is Taylor Momsen? Or Zac Efron?’ - though even I can recognise Leonardo DiCaprio.

German photographer Matthias Schaller is known for sequences of indirect portraits. Here gives us a deadpan gag with a bonus punchline. He’s sourced an impressively wide range of spacesuits and photographed them from various angles. This proposes that we take seriously the profile and frontal views of occupants (should there be any) who remain uniformly invisible, thus frustrating any use as identification or any urge to compare cosmo- with astro-nauts. Neat: but, neater still, the reflections of each set also describe a lunar cycle, conflating the explorative goals of the 60’s with the minimalist sequencing of much of its art... 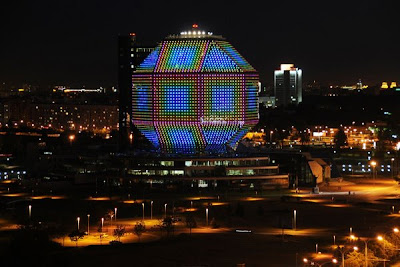 This year marks the tenth anniversary of the French artist Raphaël Zarka’s discovery of abandoned concrete breakwaters in rhombicuboctahedron form (since you ask, a semi-regular polyhedron with 26 sides, 18 of them square and 8 triangular). Whatever the concealed, perhaps mystical, properties of the shape may or may not be - and therein lies some of the tease - Zarka has tracked down many such since, as if seeking to flesh out an ideal. Talking of idealism, this show reprises past rhombicuboctahedral finds along with his latest discovery: the regime-spanning National Library in Minsk, Belarus, which was designed in the communist 80’s but not built until 2006. Mind you, President Lukashenko’s methods tend towards the old-school, too. 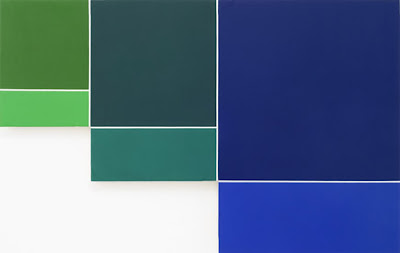 On the one hand this is a vibrant show of intensely-coloured hard-edged abstraction from the 1970’s by an almost-forgotten Danish-born Londoner who runs through variations in scale, tone and hue within a painting to punchy effect, and has a persuasive way with oddly-shaped canvasses. On the other hand it conceals a sad tale. Hedegaard (1929-2008) gave up painting completely in 1976 following unfavourable reviews. Those missing decades seem a shame in the bright light of this selection. 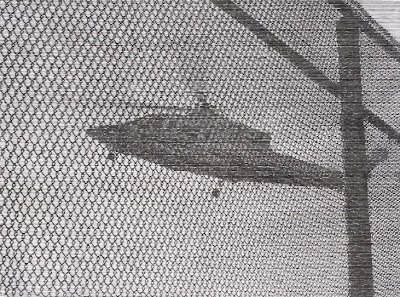 Both Alan Cristea spaces will be devoted to Christiane Baumgartner, a German artist who combines the oldest and slowest means of reproducing images with the newest and fastest in the form of woodcuts made with paradoxical labour from video images, and sometimes on a monumental scale. Baumgartner arrived at this combination as a means of returning to her traditional training in communist Leipzig after working in digital media for some years. Her subjects are often linked to movement and communication, subjects emphasised by showing the same scene at slightly different times. Baumgartner will be speaking the opening (6 pm, 16 Feb, all welcome).

Lynn Chadwick: The Couple @ Pangolin to 26 Feb – a more varied progress through the theme than you might expect, and just right for a Valentine’s visit.

Christian Hidaka: Waterfall at the Top of the River @ Max Wigram to 19 Feb – New! Improved! Christian Ward rebrands himself successfully in the Japanese context of his mother’s maiden name.

Adam Ross: The Eternal Space Between @ Hales Gallery to 19 Feb – spatial ambiguities and muitilayered seduction through what look like abstract versions of flights over California.

Peter Coffin: Cosmolology + 1 @ Herald St to 20 Feb – coloured clouds and vertical neons as the imaginative American ponders those who study the studiers of the universe.

Myriam Mechita @ Bloomberg Space to 12 Feb: her installation of glittering headless excess, 31st in the long-running ‘Comma’ series, is one of the most striking.

Phoebe Unwin: Man made @ Wilkinson to 6 March – plays the game (and maybe more) of guess-the-image out of near abstraction with painterly assurance.

Keren Cytter: Avalanche @ Pilar Corrias and the David Robert's Art Foundation: four linked films fragment and cross-stitch a narrative across two galleries. Makes most sense, I think, if you start at David Roberts.

Philip King @ Flowers East to 19 Feb – an interesting 50 year survey of the still lively sculptor who represented Britain in the 1968 Venice Bienalle, though I did feel that the show peaks early with 'Drift' from 1962.