For those seeking reasons to visit Paris (how hard can it be?), the substantial Manet show at the Musée  D’Orsay has been extended to 17 July. What, the Louvre aside, might go with that? Two other highlights  - a comprehensive book-driven look at Richard Prince’s world at the Bibliothéque Nationale and Francois Morellet’s imaginatively laid out ‘Reinstallations’ at the Pompidou - are at the end of their runs. Several of the obvious big hitters (Palais de Tokyo, Musée d’Art Moderne, Foundation Cartier, Pinacothéque, Perrotin, Marian Goodman, Karsten Greve, Yvon Lambert) are underpowered at present. But on the other hand:

Who’d have thought that the Canadian city of Winnipeg (pop 700,000), best-known for isolation, cold and having once housed Marshall McCluhan and Neil Young, had more than 70 recent artists worth exploring? Perhaps it hasn’t, but it has enough to make this big party of a show thoroughly enjoyable, mostly in a quirky way which casts the Royal Art Lodge (Dzama, Pylychuk, Farber etc) rather than the edgier General Idea (claimed for Winnipeg through college attendance, though more associated with Toronto) as the defining collective. Nor had I realised that Erica Eyres, Karel Funk and Kent Monkman were all born in Winnipeg. Highlights include the Guy Maddin docu-fantasia which provides the show’s name, and ‘Winter Kept Us Warm’, a basement full of work showcasing the potential for erotic action during the snow-bound months.

Joe Bradley is a hot young artist in New York, but has shown little in Europe. His work varies greatly from series to series, and though I preferred this energetically childish set to the shaped monochromes grouped into figures at the Saatchi Gallery last year, the play between them enhances both. ‘Duckling Fantasy’ presents dirty abstraction (largely due to Bradley walking on the work) with underlying comic cuts in pseudo-clunky style: a tweaking of action painting’s tail to go with his earlier pulling of Ellsworth Kelly’s leg. And then there’s Rech’s other floor, of the dependably excellent Peter Peri...


I wouldn’t have guessed that the extraordinary graphite and resin ‘Contemporary Grotesques’, in a register round about Ashley Bickerton meets John Currin, were by Keith Tyson. But in his established way of bringing scientific issues into art, Tyson see them as ‘defences against accepting that each person has an identical character’, shown in the carbon from which we’re all made. I’ve no idea whether I liked the skeletal dancer, walrus-rider , triple group of urinators etc, but they certainly grabbed my attention. 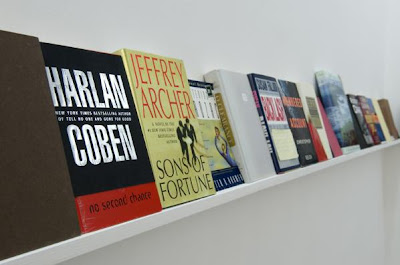 This first of two neighbouring conceptual installations utilising books sees young French artist Julien Prévieux range from google sketching to patented gestures. It centres on ‘Forget the Money’, an installation of a hundred books acquired in the post-conviction sale of the assets of Bernard Madoff, who notoriously made off with so much cash from other people. Prévieux extracts from these those sentences which contain the word ‘money’. In sound and writing, they form both a disquisition on obsession and an unbalanced pseudo-narrative which comes worryingly close to sense at times.

New-York based Canadian Gareth Long plays off the iconic US designs for J.D. Sa¬lin¬ger’s novels. The books themselves appear with all but the diagonal rainbow flashes erased from their covers, perhaps referencing Salinger’s notorious secrecy. That pattern is then transmuted into large lenticular prints which distort the geometric modernist content as the moving viewer reads them, paralleling the way in which Salinger’s writing fractured modernist approaches. What’s nice is how the shifting Louis-come-Stella-come-Riley references draw you so effectively into the story of the work.

The Pompidou’s main summer show is a riot of mostly big, high impact pieces by 50 of the best-known artists from France and India, most of it made specifically for the show on the theme of ‘What is India Today?’, and shown in themed groups such as ‘home’ and ‘religion’. It makes for a suitably teeming experience, in which I particularly liked Loris Gréaud’s tantric room and Jean-Michel Othoniel’s first musical instrument sculpture on the French side; and Dayanita Singh’s night photographs and Sunil Gawde’s garlands of razor blades - two of the less spectacular Indian contributions compared with, say, the biggest installation of kitchen utensils I’ve ever seen from Subodh Gupta – and I’ve seen a few…
Posted by Paul Carey-Kent at 21:35