Here - somewhat belatedly - as a selection of quirky works to be seen at Art Basel 2011, as written for The Art Newspaper. But who knows, it may be that several similar pieces turn up at Frieze... 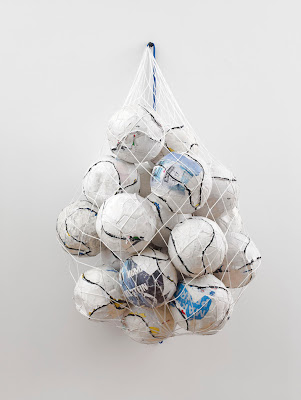 Those who suspect that contemporary art is a load of balls could seek confirmation in Mark Bradford's 'Soccer Ball Bag 3'. But there was more to the work than playing on how it might accurately be described. The balls were covered with paper, so connecting them to the collage style of the LA artist’s paintings, which incorporate remnants of found posters from inner city walls. Bradford also picks up on social change: the basketball-playing Negroes outside his studio have given way to soccer-playing Hispanics as the neighbourhood evolves. 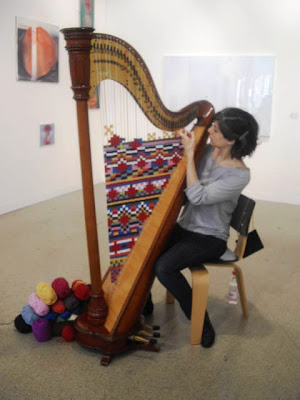 The most assiduous artist was emerging American Jamie Isenstein, who spent the whole six days of the Fair 'playing the harp silently', as she put it, by weaving a rug around its strings - and that followed a solid week spent the same way in Karlsruhe. She said it was hard to block out all the flash photography and other distractions, the more so as she’d never performed openly before, only while hidden inside her sculptures. Isenstein’s labour-intensive way of turning sound into colour fitted with a wider trend towards exploring how art relates to craft.

Among the works which consistently attracted a crowd for more than a passing glance were Pierre Huyghe’s aminatronic penguin; Douglas Gordon’s close-ups (one video screen per eye) of singer Rufus Wainwright’s heavily made-up eyes; and Yutaka Sone's marble version of Manhattan Island. New Yorkers and beyond were drawn in by its dream-like whiteness, iceberg-worthy height, and a level of recognisable detail which made it no surprise to learn that the Japanese-American sculptor was informed by research flights in a helicopter. The 2.5 ton marble edition was carved at Sone’s own longstanding Chinese studio in Chongwu.

Latvian-born New Yorker Vija Celmins provided the longest gap: it's 30 years since she made ‘To Fix the Image in Memory’, a constellation of eleven pebbles together with duplicates of painted bronze, rendered so alike the viewer was drawn into ever-closes scrutiny trying to tell which was which. Celmins has since become highly regarded for her elemental images of deserts, seas and stars. Now she's returned to the contrast of real and imitation by faithfully copying a found school slate, along with the writing which stands in for – and in the copy it literally is - a painting. 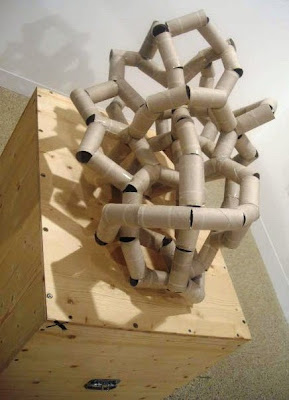 
Contrasting with marble, entrants in the always-competitive field of cheapskate materials included Sarah Ramo’s mountain of bags, Liam Gillick’s pile of newspapers – and Heimo Zobernig's use of the inner tubes from toilet rolls. There were also plenty of the Austrian’s better-known paintings on view: they, too, parody the language of minimalism by using apparently unsuitable materials and perverse approaches. ‘Untitled’ stood out for the art logic of its sly connection to the scatological traditions of Viennese actionism, and the ironically substantial wooden transport box-come-plinth on which it stood. Oh yes, yours for a slightly less cheapskate £25,000. 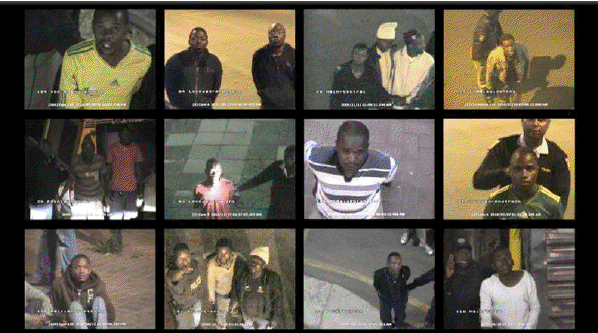 Perhaps the most controversial (and longest-titled!) work on view was South African Mikhael Subotzky's quarter hour compilation of police CCTV footage of crimes taking place in central Johannesburg. Some of this was sickeningly violent, but there was a happy ending in that all twelve films concluded simultaneously with the police making an arrest. Subotzky says he used to be interested in crime through the prisms of art, anthropology, sociology and psychology – but all he could think about here was his own two eyes ‘looking out and looking in’. 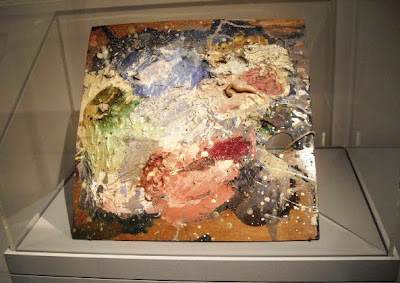 In some ways the cheekiest sales pitch was to ask £150,000 for something which wasn’t an artwork at all – one of the palettes which were left in Picasso’s studio when he died. On the other hand, you could say that’s cheap for a Picasso. Certainly it was interesting to see it, and to wonder which painting had received the mixture of blue, green, pink and grey. Consistent with that offer, there was no sign of any change in the top order among the less contemporary artists at the Fair, with Picasso, Warhol and Bacon remaining pre-eminent.
Posted by Paul Carey-Kent at 22:13