The best shows in November are the obvious ones: Richter (Tate Modern), Sasnal (Whitechapel) and Sala (Serpentine - 50 minute cycle with live saxaphone). So the big institutions are on the up, and  – whatever the uncertainties of the economy may be – more galleries are opening than closing. That’s partly down to the trend for foreign galleries to operate a London hub (there are recent Russian, Italian and American examples), partly due to the move towards multiple spaces. So it is that I can include several new galleries below. Two of my chosen shows, incidentally, explore the monochrome: it’s worth mentioning, then, that Annely Juda’s impressively-conceived Morellet and Malevich exhibition includes perhaps the originating monochrome – one of Malevich’s black squares. 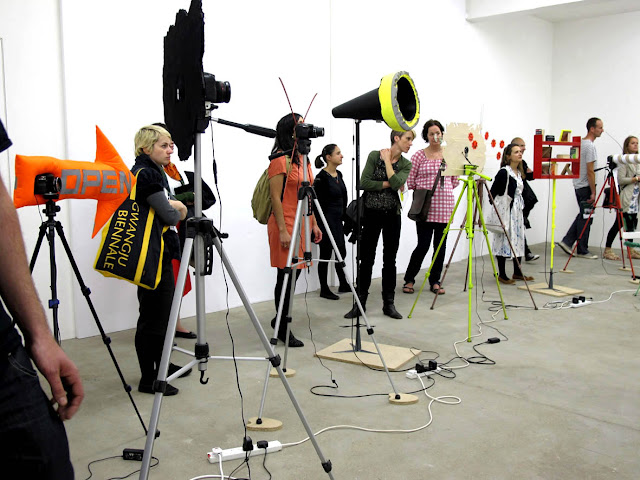 Feel-good show of the moment is Emma Hart’s chirpily hypnotic cacophony of 27 ‘assistants’ - which is to say tripod-based sculptures with avian features, each showing a short film on a pocket camera in which Hart herself makes jokes and calls out instructions. Hart explains that the bird-cameras sprung from their visual similarities as small things with beady eyes, and their shared ability to influence our behaviour, eg we try to spot both. And ‘somehow you can make birds with just one feather, or a pointy shape, and I got interested in stretching our ability to ‘pigeon-hole’ everything into a type’. Fun aside, this picks up on her ongoing concern for the camera as an active creator of events, and also sneaks in surveillance as a darker theme by way of twitching.

Robilant + Voena’s first show with both first and second floors available is a must-see not just for 15 superb Morandi still life oils from the 40-60’s, but also a rare London outing for the provocative yet substantial Ghent-based Wim Delvoye. A big bronze twisting Jesus rather startlingly shares the Morandi room, while Delvoye’s own main space has four sculptures in the Gothic mode through which he adds history and religion to his more visceral concerns. They intricately combine contrasting elements – as in this bulldozer/cathedral – to metaphorical effect. And don’t miss the office, where a tattooed stuffed pig, three pigskin ‘paintings’ and preparatory drawings for the well-known Cloaca machines (which mimic the human digestive system) make the show a fair sample, x-rays aside, of Delvoye’s main strands.

Cologne-based Thomas Grünfeld is best known for his ongoing series of ‘Misfits’, which comment on human interference with nature by joining taxidermied animals together. But there’s just the one bulldog/goat here: rather, Hidde van Seggelen’s spacious new gallery just off the Kings Road shows Grünfeld’s resonant breadth from a surprising early trio of sparrows on cricket balls to two streams of ‘paintings’: several using various cuts of felt in punchy style, and the playfully macabre ‘Augenbilder’, which use a mixture of glass eyes as the speckles on egg shapes so that the paintings seem to look at the viewer.

This is a substantial first solo show in Britain for the Ukraine’s most-feted painter. Having emerged as part of the underground scene in the Communist era, Tistol set out to transform Soviet and Ukrainian national stereotypes into positive archetypes. In so doing, he works at themes which combine issues of nationhood with the development of his own identity: here through rooms concentrating on palm trees in Crimean seaside resorts; mountains taken from a cigarette packet; and his own meals respectively. Taken together, they make for an energetic exploration of post-pop painting and a satisfyingly complex take on the possibilities for happiness.

Despite the curious name (shurely shome mistake? No, it's actually a play on a new era of art, not erroneous errata) the new Erarta gallery looks set to present an interesting Russian programme. Here Rinat Voligamsi mocks the Red Army in which he served in the last year of the Soviet system. A wintry video, viewable from outside, introduces monochrome paintings which freeze and subtly subvert 1940’s-50’s photographs of soldiers in cold settings: some are reduced to marching legs; some parade upside-down, heads stuck in the snow. Other images look more realistic, but then you notice that soldiers are lit as if for an interrogation, or the pattern of their burning cigarettes makes up the constellation which signals the mother country.

Two new galleries, with directors who were formerly director and assistant at the Fine Art Society’s contemporary space, are showing the sculptor Leonardo Drew - whose last London show was indeed with FAS.  Drew, who's just won the annual Joyce Alexander Wein Prize for an African-American artist, grew up amongst the poverty of the Bridgeport projects in an apartment overlooking the municipal rubbish dump, and has internalized the emotional recycling of the discarded. Vigo has a solo show of relatively restrained wood pieces which resonate more deeply in the context of Drew’s work as a whole. Rosenfeld Porcini, who have an impressive two floor space, include him in a nine artist show of sculpture concerned with memory in which Kaarina Kaikkonen’s complex use of discarded clothing, Roberto Almagno’s forms out of forest branches and Mar Arza’s multiple sand clocks also make a strong impression. 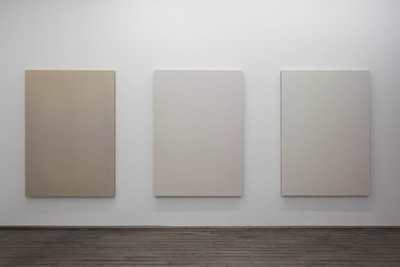 Campoli Presti is Sutton Lane as was, rebranded on a much larger scale in what is now a very handy gallery block incorporating the relocated Hotel, as well as Between Bridges, Herald St and Maureen Paley. Scott Lyall teases with some photographic flesh in a flyer in the foyer, but his works are ‘nudes’ only in that his canvases wears nothing but a hint of pale skin colour, which comes not from paint but the combination of many inks and their erasure in multiple passes through a UV-based printer. You could call it the ultimate reduction of ‘painting’ to naked colour - no hand, no image, no design – were it not that little colour remains, either. 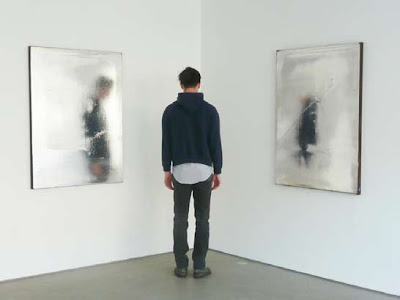 Against the odds, you might have thought, comes another artist finding a novel way to reach the monochrome. Jacob Kassay has become decidedly trendy for his silver ones, which have sold at auction for £200,000. They’re made by applying paint then chemically silver-plating over it to generate a slightly unpredictable effect with definite presence: they're somewhere between a painting and a mirror, but also reference photographic processes. Here Kassay shows them downstairs on a sculptural wall construction, along shaped white abstracts which converse with the upstairs space much as the semi-reflective silver works converse with the viewer. Like them or not, this feels like what the ICA should be doing: giving the wider British public a first chance to pick up on what’s hot.


Richard Galpin: Let Us Build Us a City and a Tower @ Hales Gallery, The Tea Building, 7 Bethnal Green Rd – Shoreditch

Richard Galpin's tool of choice is the scalpel, which he uses to cut away large prints of his photographs of buildings to reveal an alternate set of architectural geometries. Here the original buildings are recent additions to the London skyline, emerging (due to the planning and building time taken) as if in defiance of the economic cycle. Timescales collapse as the scalpel reduces them to ruins of a sort, while at the same time incorporating the past utopian plans of Chernikov and Nieuwenhuy. Galpin's most radical applications of the method peel so much of the image away, the results look at first more like drawings than photographs.

The New York based Lebanese painter Nabil Nahas (born 1949: say ‘nerBIL nerHASS’) follows a museum retrospective in Beirut with his most substantial British showing: recent work from ongoing streams of abstracts which might be termed ‘organic geometry’. They make reference to natural and Islamic forms, some by the literal incorporation of starfish; others by mixing acrylic with pumice to build up intensely-coloured coral-like formations which project from the canvas. They’re certainly seductive, but also create a dialogue between nature and culture which puts me in mind of Philip Taaffe.


Images courtesy the relevant artists and galleries.
Posted by Paul Carey-Kent at 23:48