The highest concentration of galleries may be in Mayfair, Fitzrovia and the West End, but art is well-dispersed in London with good shows to be found in all directions… so it is that the following ten recommendation don’t include any galleries with a W1 postcode. I start in Ealing and traverse Bermondsey, Hoxton, Hackney, Wimbledon, Cambridge Heath, Finsbury, Kensington, Whitechapel and Shoreditch in the following - and I was also tempted by Camden, Islington, Lambeth and Peckham…

The word ‘portentous’ may never be far away with Anselm Kiefer, but his literally heavy symbolism proves well-suited to White Cube’s monumental new Bermondsey space: alchemy and history weave through twenty works including paintings weighing more than a ton due to the boulders, lead wings, metal sunflowers etc hanging off them. Their dark and salty silveriness is resonantly aged by exposure to the elements; and the recently closed Tempelhof Airport in Berlin, which Speer envisaged as Hitler’s gateway to Europe, proves a fertile source of apocalyptic mysticism. True, Kiefer seems doomed to re-enact the same obsessions, but isn’t that part of his point? And has he ever done so this powerfully in Britain?

Want an English artist with some of Kiefer’s majesty, albeit to quite different ends? I suggest the latest of David Hepher’s long-running landscapes of blocks of flats, here the huge Aylesbury Estate in Walworth. Aside from a rhyming name and similar scale (like Kiefer, he has a painting more than 10 metres wide) Hepher also skewers romanticism and mixes the pictorial and the real - here are not just paintings of buildings, some on photographs of buildings, but irruptive paintings of other scenes, images in grafitti on the buildings, and building materials forming part of the pictures. ‘Three Trees’, for example, plays a game reminiscent of Joseph Kosuth’s famous comparison of a chair with its representations. 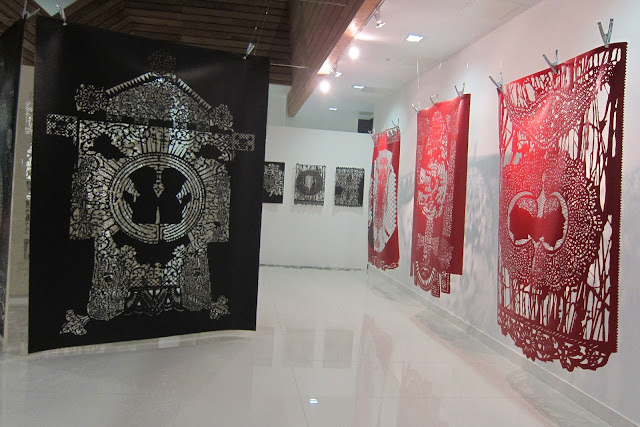 The newly-expanded London Overground makes Hackney easy to reach, and Jarek Piotrowski’s impressively-scaled (actually on the site of the old Flowers East) is a good reason to go there. The German-based Polish-born Canadian isn’t one to get stuck in a style any more than in a country. Ink drawings, pastels overworked to considerable effect, and atmospherically sylvan watercolours complement the dominant work here: Piotrowski uses a surgeon’s scalpel to excise intricate patterns, many of them found in medical textbooks, from large PVC mats of a type common in hospitals and playgrounds. The bodily, then, is cut into the industrial - and hung so that the shadows, which make intimately ghostly positives of the negative removals, are integral.
﻿
The Perfect Nude @ Wimbledon Space, Merton Hall Rd – Wimbledon

To 10 Feb (weekdays only): wimbledonspace@wimbledon.arts.ac.uk

A healthy, if preferably clothed, ten minute walk from Wimbledon station you’ll find a hundred nudes – made by fellow artists at the request of Dan Coombs and Philip Allen. That’s some way from the day job for most, and a contrast develops between those who make characteristic-looking work at something of a kilter from the tradition (Danny Rolph, Alexis Harding…) while others are less recognisably their usual selves (Mali Morris, Allen himself). Lee Maeltzer, Andy Harper and Sam Windett land rather effectively on the middle of that continuum, and Damien Meade stood out among those new to me. The diversity makes it hard to draw conclusions about nude today, but my impression was that the artists enjoyed the freedom enforced by this constraint. 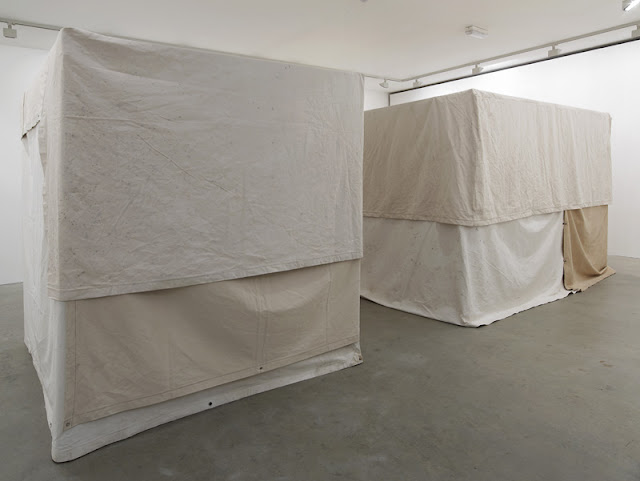 In the kind of show you’ll remember even if you don’t like it, Brian Griffiths riffs on the empty gallery as exhibit and the possibility that the show isn’t yet ready to open by seeming to cloak large sculptural works in beige tarpaulin. Of course, this ‘cosmic latte’, as Griffiths terms it, becomes the work it purports to cover, the more so as its shades of would-be-camouflage are lovingly hand-painted. That brought to mind Richard Tuttle, which also fits with how the minimalist cube is made provisional. But you could equally see the installation as frustrating the urge to see inside – to the action in tents at a fair, perhaps, or into the artist’s own process…

The London-based French artist Caroline Achaintre is perhaps best-known for her mask-like wall rugs which combine ancient and modern as they ‘paint in wool’. Here, though, ceramics predominate with three neat twists: first, they too exploit our natural tendency to find faces in what at first seems abstract; second, several appear to be melting, as if the soft-to-hard process of the clay has gone into reverse; and third, some make punchy use of other materials, such as black leather as in the fetishitic carnivality of ‘Panto’, (which ties a bulbous ceramic nose onto a leather ball) and ‘Tie Man’ (in which the leather neckwear seems to double as an anti-gravitational noose).

Of the three biggest names in Brazilian neo-concretism, Hélio Oiticica has had a Tate retrospective; and Lygia Clark has been well-shown here by Alison Jacques – yet this is London’s first broad view of Lygia Pape (1927-2004: say ‘Par-pay’), whose multi-media work often focuses on aesthetic experiences which are available for relationships in collective terms. Two works stand out: the 365 tempera-on-wood contractions of the ‘Book of Time’ (1961-63), which activate a year’s-worth of geometries through the implied movement in a process of cutting out shapes which are re-presented on a different plane; and the golden threads of the late ‘Web’, cloistered in their own dark, which shimmer tremulously as you circle round them. 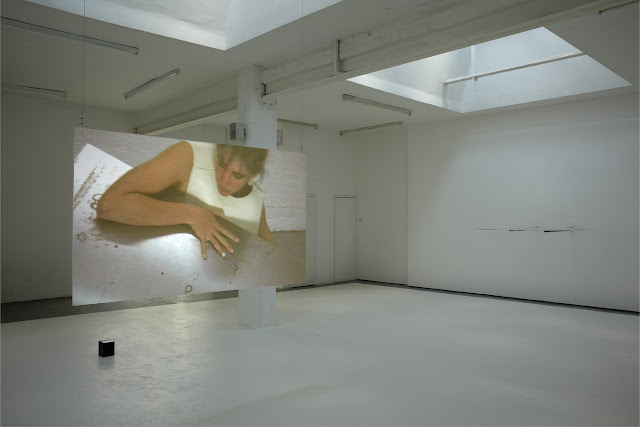 South African Mary Hurrell is a recent RCA graduate who grabbed headlines with naked figures on a shelf in her degree show. She’s installed a beautifully measured dance of space, sound and light in the gallery recently opened by Vanessa Carlos (formerly at The Approach) and fellow-Brazilian Nara Ishikawa. The viewer is lured onto a floor painted to resemble a white dance mat, and into movement around ambiguously-volumed constructions of jesmonite, Perspex and steel to a soundtrack made by a genuine dancer, elegantly filmed manipulating a metal sheet as wobble-board. The whole coheres to form a curious combination of antiseptic, industrial and poetic.


Daniel Rapley: Covenant @ PayneShurvell, 16 Hewett St & Olek: ‘I do not expect to be a mother, but I do expect to die alone’ @ Tony’s Gallery, 68 Sclater St – Shoreditch

These two convincingly obsessive artists can be found within a couple of hundred Shoreditch yards. Daniel Rapley has transcribed the Bible by hand – though you have to take that on faith from the first of the 750-or-so double-covered sheets of neat writing. He muses entertainingly on his activities in astonishingly print-like pencil drawings, and is literally with us his own blood text ‘Praesentia’. New York-based Pole Olek spent two months living and crocheting in Tony Taglianetti’s gallery, covering people, furniture and any objects within her ambit - with added self-revelatory sexual twists which fit in with her Emin-quote title. How to shape the world to your own ends, or just cover the cracks?