The Saatchi gallery's stimulating 38-strong survey of photographers provides a chance to assess trends. It illustrates the switch away from photography’s being largely about seeking out and recording what's in the world. Probably only a third of the selection could be described in that way: most follow other models such as searching out pre-existing images to reuse (eg John Stezaker, Marlo Pascual); creating scenarios (eg Ryan McGinley, Laurel Nakadate) or constructing objects (Matt Lipps, Nouemie Goudal) specifically to be photographed; or manipulating the photographic process itself (Jennifer West, David Benjamin Sherry). Much the same can be said of the other most interesting current photography shows such as those of Dan Holdsworth at Brancolini Grimaldi, Alex Prager at Michael Hoppen, Shari Hatt at Space Station Sixty-Five, Sarah Hardacre at Paul Stolper, Hans-Peter Feldmann at the Serpentine and Zoe Leonard at Camden as well as the five shows with which I kick off with below…

Confused by the Rodney Graham - Douglas Gordon – Donald Rodney - Dan Graham – Stan Douglas nexus of names?  Well, all you need to know for now is that the last of those has this broodingly powerful show of 16 large format black and white photographs. They’re created in the alter ego of a 1940’s photojournalist: some reconstruct actual images of the time, others are newly imagined versions of such images – such as ‘Demobilisation Suit’, which adds a cold war overtone to the isolation of a shirt for advertising purposes. The twists come from neat narrative links (eg between different types of grip), those telling details – such as of race – which differ from the sources, and the knowledge we now bring of where the fifties led. 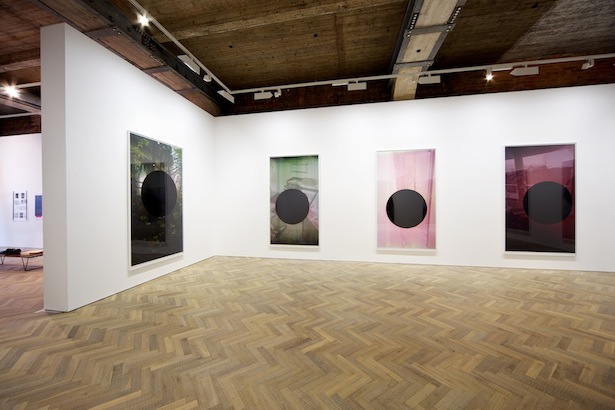 LA-based Walead Beshty provides plenty of themes to unravel as he becomes the first to make strategic use of the separated nature of Thomas Dane’s spaces. No. 11 shows one of his well-known FedEx boxes, cracked by its successive transits; several of his Travel Pictures, which exploit the chance effects of an airport’s X-ray security machines on his unexposed film of an abandoned Iraqi diplomatic mission; and a 24 hour reel of ‘cold war apocalypse films’. No. 3 has a FedEx box which finally collapsed, and has been shored up by an internal armature; Travel Pictures which have been negated by a hole-punching process; and the 24 hour reel run backwards, which is, I suppose, part of how we see the cold war now.

Janet Laurence’s Sumatran animals caught in a ‘camera trap’ are one highlight of this stimulating eight artist collection of cameraless photographs and other unconventional approaches. The other is a too-rare sighting of new work by 1999 Turner Prize shortlistee Steven Pippin (he’s the rigorous type, and has just spent ten years working out how to balance a pencil on a skyscraper). Pippin’s ‘End of Photography’ project required a firearm license and hair-trigger electronics: we see the death of analogue means made literal as cameras are shot, documented by an external photographic record, by the shattered cameras themselves, and last – violently beautiful - images extracted from the victim equipment’s moment of impact.

German star Thomas Demand is known for photographing his cardboard models of politically charged scenes so that our slow-burn detection of their constructed nature parallels the journalistic process of uncovering awkward truths. Here he applies the same process of recording an absent reality to his own rather Wentworthian phone snaps of incidental items, elevating their status through the labour he gives them in a move somewhat parallel to hyper-realist painting. That may sound a bit duller than his main stream, but the gloriously dye-transfer printed results work brilliantly. Look out for the mirror made by such mundane means...

Curator Peter Ashton Jones has brought together four painters who start with aspects of still life and arrive at variously abstract takes on the ambiguities around object, painted object, painting as object and the organic development of the object into something else entirely. The interplay is good between Clive Hodgson, Vicky Wright, Brian Sayers and Damien Meade - who takes up an aspect of Thomas Demand’s approach to photography, as the subject of his paintings are his own objects made out of modelling clay and wire. They’re a peculiar and compelling mix of abject, assertive and grotesque.

It’s a tough choice at Tate Modern: whether to queue up to queue further inside a crowded run-through of mostly too-familiar work; or to walk straight in to a beautiful yet unpeopled curation of thoughtful innovation? And if you do choose Boetti, then his current festival continues with two shows in Heddon Street. Sprovieri’s extensive selection of work on paper includes particularly fine late drawings and stamp works: the crescents make for extra visual and political echoes in this one’s typical combination of order (repetition, the postal system, the logic of placement) and disorder (inversions, surplus value, aesthetically arbitrary cancellations). Carlson has a vast and magnificent range of embroidered works.

Ben Nicholson is also having something of a moment: doing pretty well up against Mondrian at the Courtauld and Picasso at Tate Britain, and now getting all three of Bernard Jacobson’s showrooms. That allows for a 39 work survey which includes top-notch examples of everything you’d want (except a white relief, which is where the Courtauld scores). Jacobson has early landscapes, early abstracts; carved and scumbled reliefs; late landscape-come-abstracts; natural wood constructions; townscape, treescape and still life drawings… After Bacon, Nash and Lewis, our most important C20th painter? Of related note: the often quite Nicholsonian drawings of Wilhelmina Barns-Graham  at Art First. 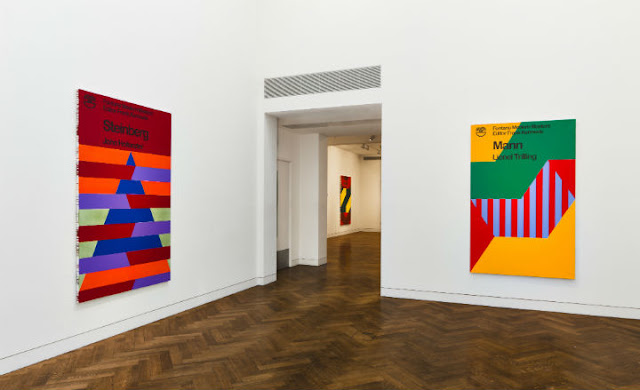 Back in 2005, Jamie Shovlin showed imagined covers for planned-but-unpublished extensions to the Fontana Modern Masters books on great thinkers, subverting the postmodern credentials of the series’ design and asserting their status as paintings through casually artful dripping. Now they’ve returned bigger and yet subtler: the drips are confined to the sides of the canvas and the barely visible layers behind the front image of 17 acrylic paintings, each bigger than you, which contain 80 possible cover designs between them. Each is a dance between theory (the application of a complex set of criteria to determine the successive colour options) and intuition (Shovlin deciding if he likes the result or will change it) - which may well chime with how the insights of Merleau-Ponty, Benjamin and Derrida et al came about… 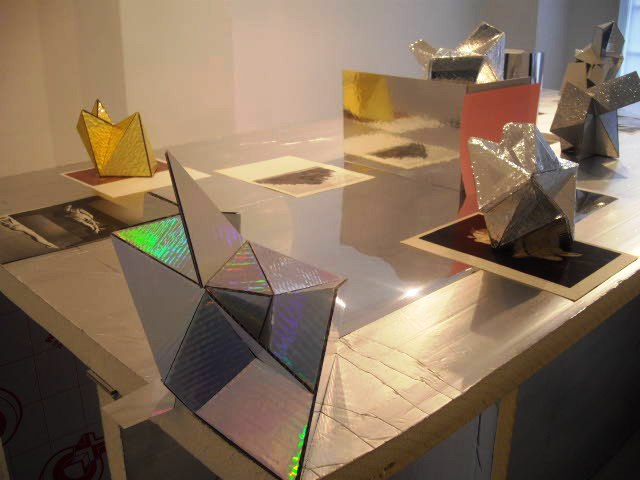 Alice Walton takes a turn towards the geometric at Tintype, now well settled in their permanent space near Hatton Garden. She has previously hidden and selectively revealed images by maskings of tape: here that role is played by constructions built from a variety of sliver surfaces and placed on the images, which they cover, distort and reflect in turn. Add that this all takes place on a chunky table made from silver-covered insulation material, and that most of the found images masked have a nineteenth century aspect, and you get a sense of the range of dialogues quietly set up. Do: ask to see the collages, too. Don’t: confuse the artist with the Wallmart heiress.

This show looks like a scholarly library in which Landers, who's been sending himself up for so long he must mean it seriously, links Melville, Beckett and Dickinson to his own entertaining  screeds on his futile compulsion to make art. The words form the titles of the books depicted in five paintings of loaded bookshelves: ‘I AM NOT A MASOCHIST ALTHOUGH THIS IS WHAT IT IS HAS COME TO’ gives a flavour. The writers come courtesy of eight steel busts of greats who have lived on through their work. Their presence implies the question: will Landers? A devilish Pan stands in the courtyard, ready, perhaps, to comment….