OCTOBER BEYOND THE OBVIOUS

No doubt about it, October is huge: two Friezes and satellites; the big galleries – including new American ones and the relocated David Roberts space – making their debuts or putting on their best; such major public exhibitions as the  persuasive end of Chinese contemporary at the Hayward, Bronzes at the Royal Academy, the Pre-Raphaelites at Tate Britain, Bharti Kher at the Parasol Unit, David Nash at Kew Gardens, Tony Cragg along Exhibition Road, and a vast amount of photography at the Barbican and Tate Modern.  Is there time for anything else?  If so, here are some extra shows well worth seeing but which might easily be missed in such a peak period...
.

The art world may wear black, but white is probably the most consistently on-trend production colour and here it informs a whole show, mainly through marble sculptures. They range from classical to neo-classical to contemporary artists who use marble not just as a beautiful material in itself, but to make a bridge from the past to current concerns or else to kick against its historic resonances - all this with a white backdrop of 1960’s Italian abstraction which makes the canvas a sculptural element. This proto-modern 17th century vanitas is among the works which Tom Sachs' marble trash can seems ready to receive.

This darker collection shows a younger generation entering an equally productive dialogue with the classical. Materials are the core of their responses: Meekyoung Shin’s conceptually suggestive soap busts weathered by hand-washing; the past recast in broken graphite by Nika Neelova; Nick van Woert’s mock-innocent weapons of white bronze; and Andreas Blank’s apparent desire to give permanent value to the corporate office environment in agate, basalt, gypsum, quartzite, slate… Darren Harvey-Regan neatly  perverts all that: he painstakingly painted  the Photoshop checkerboard signifier of emptiness onto classical forms, only to photograph the results to yield what could have been a simply generated  Photoshop look.

The interface with art of the past moves forward to modernism here, as Sue Collis’ way of applying obsessive attention to the overlooked takes the twist of alighting on an aspect of Malevich’s ‘Black Suprematic Square’ (1915) which viewers can hardly miss, but may try to ignore: namely, the fractured surface, which Collis documents in a painstaking drawing. It’s part of a show which lovingly focuses on – indeed, creates - the flaws in things, most of them custom-manufactured to Collis’ exactingly incorrect specifications. Plus, in a separate show downstairs, a fascinating experiment in inter-penetrative sound art… 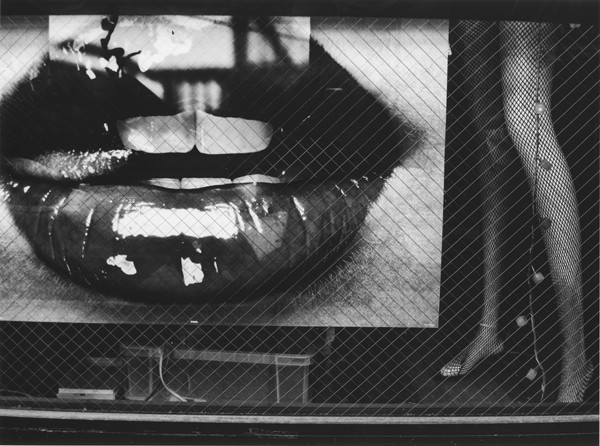 This show brings together all twenty of Moriyama's semi-abstracted shots of legs in fishnet tights, hovering between pattern and perversity; just as many close-ups of lips; and a dozen of the gritty city explorations featured more fully at his Tate Modern retrospective (10 Oct - 20 Jan), to yield a neat mini survey of the veteran Japanese photographer's unsettlingly predatory black and white world. Most of the mouths are images of images such as street posters, television screens and reflections, suggesting meaning distorted in the transmission as well as social fragmentation and isolation. Just one image combines lips and tights...

This enjoyably serious exhibition in a little-known six room space features paintings (Leger, Auerbach, Peter de Francia’s of his girlfriend, who went on to marry Berger), photography (Jean Mohr chronicling Berger’s cragification), video (notably of Berger talking us through the chance to join in a life drawing session) and a sound work as well as audio and written archives. It tracks the Marxist  art critic from budding painter (but there were ‘too many political urgencies’ to dedicate himself to that)  to provocative critic and novelist  to story-telling analyst of change in the rural economy of his French Alpine redoubt.  It’s so well put together, I  hardly cared that the fascinating ‘The Success and Failure of Picasso’ hardly features. Talking of which...

The eye-poppingly dominant presence here is Picasso. That's enjoyable in itself, but what’s the justification? First, several are self portraits and convey both Housley's own love of paint and of its masters - in line with Picasso's own homagist practice. Second, Picasso’s tropes are pushed to absurd lengths: Paul / Pablo's beady eyes multiply and a landscape somehow appears in his head. Third, a closer look reveals that others are involved, notably Rembrandt: ‘Woman showing Joy’ sneaks in his 'Woman Bathing in a River' under the heavy cover of  Picasso's most radical early 30's nudes. It’s more than imitation fun, then... and the sculptures are something else.

Jonathan Parsons has kept a relatively low London profile since his dissected map hung - literally - in 'Sensation', but has continued to investigate methods of producing visual meaning by separating out aspects of, for example, flags, the grid and graffiti marks, and pushing them to their limits.  This then, is a welcome show: it features a dot matrix sculpture, disk paintings which spin off from how children pick up colour words, and reverse drawings which confuse figure and ground. Seductive visuals emerge as if by chance - but it's an art in itself to create the context for that chance.

Mali Morris’ paintings, energised by their interplay of the planned and the spontaneous, both hide and reveal. First, she fills the canvas with a variety of bright colours; second, she covers those with darker strokes; third, she niftily sponges off small shapes – often dots, recently squares, too - from the top surface. Typically, she’ll go through that cycle several times before she’s satisfied with the push and pull between accumulating layers, and the exactness of the colour-chord discovered. Though far from didactic, I wonder if they might suggest that, while we all have hidden depths, we need to find a social way to display and harmonise them. 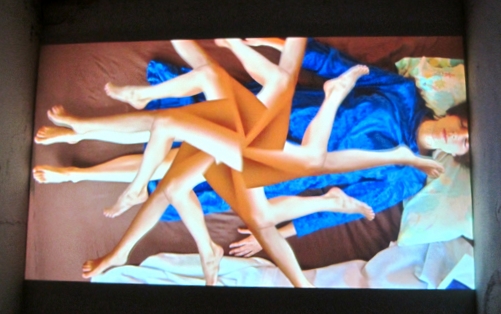 9 - 27 Oct: www.gimpelfils.com
Californian artist Shana Moulton’s video installations bring performative spontaneity, kooky narrative logic and a colourful pseudo-transcendental kitsch to the absurdities of consumer life and its promises of self-improvement. Objects take on an anthropomorphic quality, spilling over to become props which blur the boundaries between film and setting, further complicated when Moulton herself – or is it her hypochondriac and unworldly alter ego Cynthia? –  performs in person alongside. Her new work, triggered by advertisements in  health magazine ‘Prevention’, pushes those fun factors further whilst addressing the exaggeration of ailments for commercial gain – standing, perhaps, for the wider ailment of manipulated desire. 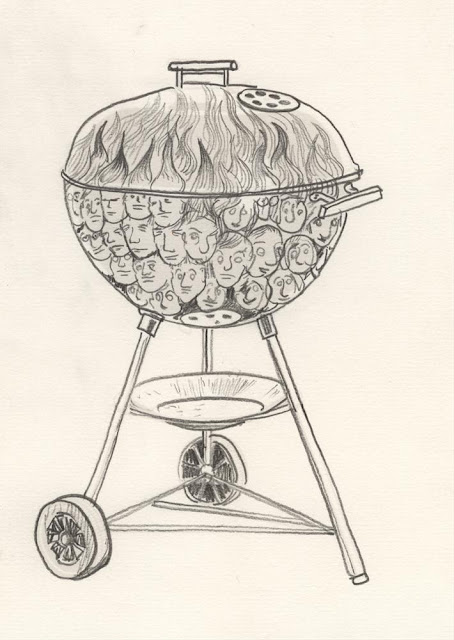 Another artist to expand from and yet retain aspects of performance is the third – and last – to be given the run of the large spaces which Ceri Hand opened temporarily on her welcome move from Liverpool (ahead of taking up permanent residence in Fitzrovia). Those who saw the crashed lamppost or heard the singing toothbrushes at Bedwyr Williams’ recent Ikon solo will be anticipating more engagingly droll yet pointed wackiness in these new sculptures, films, drawings and photographs – even beforehand, as next year’s Welsh rep in Venice uses his  press release to make such entertaining threats as ‘to eat your wedding presents in front of you’.

Nick Darmstaedter: Bells and Whistles Can of  @ Ritter/Zamet, 80A  - Whitechapel

Marcus Ritter’s has an impressive record of showing interesting young American artists, and the latest is 24-year-old Nick Darmstaedter. Among his several strands are paintings made by ‘printing’ with copper-rich (and therefore pre-1982) US pennies, to which Darmstaedter applies a salt and vinegar solution which accelerates the formation of a patina which bleeds nicely. A paradoxically rich mix of history (via 's head), recessionary economics, pattern and chance result from the least valuable cash in gridded or free formations. I also liked his assisted readymade combination of manhole covers and barbell to make a kind of street savvy weight for lifting.

The artistic community of binders is in good fettle: at the Hayward you can see how Liang Shaoji has arranged for silk worms to cocoon objects over several years; and at  Riflemaker Alice Anderson, the French Algerian daughter of a ballet dancer, leads a troop of 20 whose movements are choreographed by the action required to bind the entire contents of her studio in copper thread. The sculptures emerging from their six full days of trance-movement will preserve, obscure and refer to the elements of Anderson’s overall practice, known for its Freudian mythicising of her own strikingly coppery hair.