Ah, the London Art Fair (Previews 15 Jan, public opening 16-20 Jan at the Business Design Centre, 52 Upper Street, Islington) . Very much sub-Frieze these days; not the most attractive location; many of the same galleries selling much-the-same stuff, a good proportion of it rather tacky… So why bother? In fact, there’s always enough interesting work to make a visit entertaining and worthwhile, it’s just a matter of speeding past where appropriate and slowing down for the good stuff. That typically includes the curated Photo 50 section and a high proportion of the galleries in Art Projects (eg another ten reasons could have been Beers Lambert, Ceri Hand, Cole, Edel Assanti, Hannah Barry, Limoncello, Tintype, Vela, Vigo and the chance to pick up the Catlin Guide to recent graduates' work).

Here are ten to look out for...

Jack Bell, who travels the world to bring the unexpected to his Mason's Yard space, is showing Leonce Raphael Agbodjelou, the  leading photographer from the Republic of Benin. Here what may look like an improbably imaginative means of disguising the self for performative art purposes is in fact from one of several series which picture life in the Porto Novo region. Here one of the Egungun masqueraders who appear at Yoruba funerals to mark and guide the passage of the deceased to the spirit world, and  at festivals in order to forestall major misfortunes which threaten the local community. 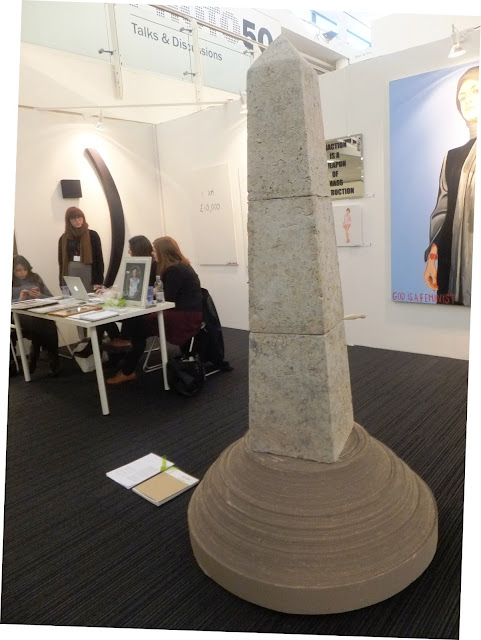 
When Steven Morgana saw Michelangelo Pistoletto’s ‘The Mirror of  Judgement’  at the Serpentine last year, he wasn’t impressed, concluding that ‘taking a spiritual stroll through a cardboard labyrinth to then worship one’s image at a mirrored obelisk’ did ‘nothing to engage with conditions of  today’s globalised societies’. By chance, Morgana obtained 35 rolls of the cardboard used by Pistoletto, cut it up, added concrete, and made an unmirrored obelisk asserting its materiality and peculiar history in what he sees as a less indulgent style.  Morgana hopes this work ‘will express an affinity between the fate of extinct civilisations which created the original obelisks’ and the ‘uncertain future..  of  the contemporary civilisation to which it belongs’. Whatever you think of Pistoletto, it certainly makes a change from homages.

It’s not easy for small not-for-profit spaces and non-commercial groupings to show in an art fair: hence the radical approach of the Artist-Led Initiatives Support Network (ALISN), led here by the Deptford gallery run by sculptor Iavor Lubomirov and painter Bella Easton. They’ve bought a space shared by no fewer than 17 of the 300-odd cash-poor but imagination-rich artist-led organisations in the country*.  They’ll show an artist each, and the quality – Vasilis Avramidis, David Blandy and Julia Riddiough, for example – looks high. 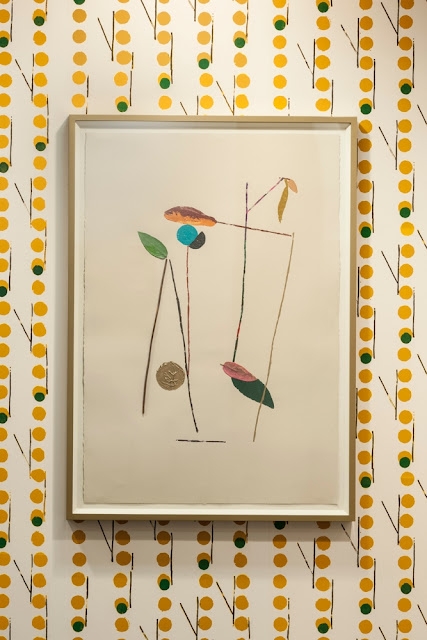 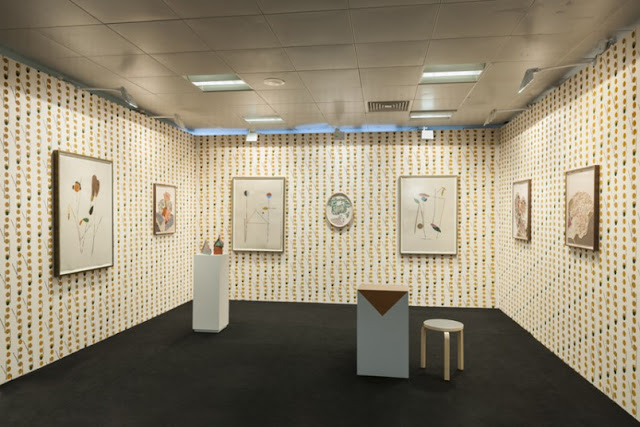 It’s a shame Poppy Sebire is closing her eponymous gallery, which has not only had a consistently impressive programme but also been perhaps the most artist-friendly of commercial spaces. More by way of celebrating a stimulating four year project that than mourning its end, she signs off with a first London Art Fair appearance, and promises to do so in style: Georgie Hopton will be taking over the entire booth with her gently witty photographs, vegetable prints and collages, all shown against her own wallpaper in a collaboration with the RA print department.  Expect an integrated adult garden context for playful childishness...

Julia Alvarez’ Deptford gallery is a regular at the Fair, and will exhibit 'Penumbra', the latest series by Suzanne Moxhay. She uses a combination of found images - the National Geographic is a favourite source - and model making to construct what are effectively her own small scale designs for film sets. She photographs and digitally manipulates these so that the miniature merges with the epic and it is hard to tell the real space from the illusory. The resulting environments, as she says, ‘exist in a space between various intersecting fields of representation while embodying a reality of their own’, in this case inspired by exploring the edgelands of London, where small patches of wilderness encroach on the man made environment, creating strange juxtapositions of the natural and urban.

Richard Saltoun, who has just opened his own gallery in Fitzrovia but is collaborating here with Karsten Schubert, is a particularly strong presenter of female artists from previous generations. Helen Chadwick prefigured aspects of the YBA’s approaches before her untimely death in 1996. Her thirteen-strong series of‘Wreaths to Pleasure’ (she called them ‘bad blooms’) have a seductive repulsiveness to their bodily sub-texts.  ‘No.1’ clusters tightly-bunched tulips round a single black cherry in a well of oil to generate an image which collapses interior and exterior to appear at once cellular and sexual,

Susan Derges has made her name by the wonderfully literal means of putting photographic paper in a river and leaving the moon to develop it. Her recent work finds a way to produce comparable effects in the studio with a camera, ripple tank, coloured film and various floated objects.  The results in her recent full show ‘Alder Brook’ stand alone, but can also be followed along with the imagistic fragment-poems by Thomas A. Clark. Here, for example, is the ‘continuous present’ of a body of water, ‘its task  / an infinite / alteration / of itself’ –  pretty much the task of art, then…

The French-based Finnish photographer  Elina Brotherus often casts herself in explicit dialogue with art history, concentrating on the artist-model dynamic by playing both roles. Here that's in another typical context, the combination of nude in the landscape, and uses a characteristically non-controntational pose n which she turns away from the viewer's gaze. The figure, echoing Bill Brandt as well as painterly traditions, takes on some of the monumentality of rock against the explicitly tracked flux of water.

Bristol-based Works|Projects 'will explore the disruption of form and language, time and space' through five emerging artists from the South-West. I'll be interested to learn how writer-sculptor Marie Toseland's striking installation of 15 speakers, 6 amps, mixing desk, ice block and raw amplified sound tackles the themes implied by its title: 'Being & Nothingness'. Perhaps it performs the impossibility, according to Sartre's doomy account, of fully aligning consciousness with bodily being? Result, if so: a melting ice block of sexual frustration. 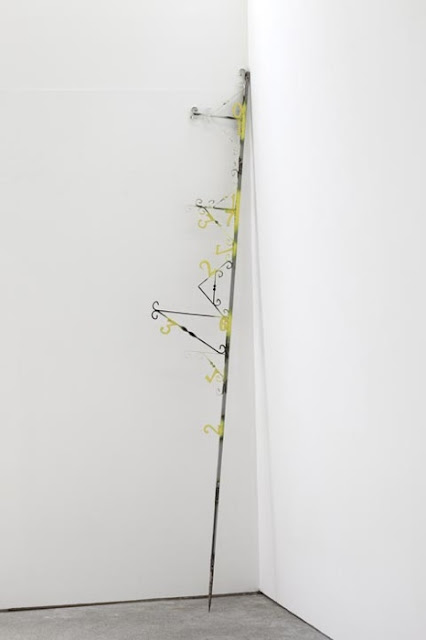 In fact, Works / Projects showed a range of work including a rather quieter Toseland and this witty 'Pike Planning Inspectorate)' by Mike Ricketts, made with spray paint on suburb-sourced door numbers, hanging basket brackets. 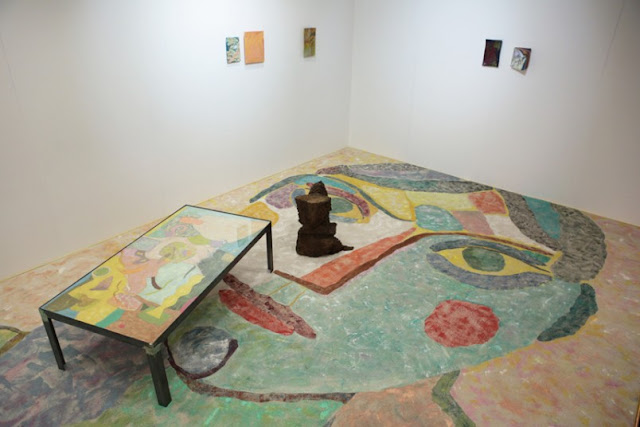 Samara Scott at The Sunday Painter


Everything slips towards everything else in Samara Scott's sculptures, which have made her one of the more noticed of recent graduates. It's as if the plurality of the internet were applied to unglamorous left overs to simultaneously romantic and revolting effect.  So the  faux fur, dye, household paints used above are as typical as any set of constituents for a piece.  Scott herself says the work is 'a sort of liquidy making, where naive absent-minded processes direct material - leftovers, scum, scraps that I surround myself with - and trickle it through all sorts of ranges' and - she isn't short of words - that it's 'serious about sexy textures, juicy garnishes, stained carpets, glittery waterfalls and silhouettes kissing against sunsets'.

Those proved good choices, and - sticking for no particular reason to abstract-tending work, I also liked...