BODIES AND MOVEMENT IN MAY

A quick plug for the Drawing Room, which holds its biennial fund-raising silent auction of drawings by over 200 contributing artists in its newish Bermondsey space for the first time (concludes 15 May): my pick from a lively selection is a witty watercolour by Georgina Starr, which leads me into several shows featuring the body ready for action, before moving back to the business of galleries moving…

The latest set in Benin photographer Leonce Raphael Agbodjelou's sequence of themed portraits of the people of his home town, Porto-Novo, sees him move on from voodoo masqueraders and women in colonial settings to the triple-loaded contrast of musclemen posed with artificial flowers against intense backdrops of African fabric. These reference the studio portrait photography tradition of Seydou Keita (and of Agbodjelou's photographer father) and also echo how Kehinde Wiley's black characters are overtaken by background patterning. Add specific local resonances, such as an implicit challenge to negative attitudes towards homosexuality, and there’s much more here than the obvious visual chutzpah.

I'm never too sure how much I like American painter Lisa Yuskavage's cutesy-classical provocations of painterly kitsch, in which women and nature seem equally wanton and fecund - which may be as it should: she herself says she strives ‘to bother people and to be loved for it’ and accepts that her work is ‘potentially terrible’. Her latest show is a study in scale. Large (2m high) very green landscapes, in which the frontal characters combine strangely with small background figures which often pop-up between their legs, are set against far smaller paintings (25 cm high) which range the figures around fires at dusk, hinting at some sort of ritual. The puzzle which drew me in was how they seem to work in completely different sizes to similar effect.


London-based Swedish painter Martin Gustavsson tends to work in extended series, such as in the rearrangeable and expandable elements of In No Particular Order. His new direction is full of movement: acidic, in-your-face colours are used to uncannily corporeal effect to catch the effect of circling round a sculpture. The paintings themselves encircle the space and act as bodily objects, too: in a tribute to Rauschenberg which put me in my mind of his dance connections (still on view at the Barbican) and also interacts strongly with the gallery’s architecture. One painting rests on a tyre, another sports half a rusty framing device, three are bound together with a strap.


Five of Carol Rhodes' poised and painterly examinations of the effect of distance on our perception of landscape are complemented by the drawings which she uses in their production; and by three images which her gallerist Andrew Mummery has chosen as linked to her practice. Those include a Luigi Ghirri photograph and an Indian miniature, picking up both on the inspiration Rhodes drew from her Bengal childhood. The  unusually dark painting above was based on a drawing made in India (but not of it - Rhodes does not picture literal places). The three part show amounts to a portrait of sorts, and I started to wonder whether the prevalence of roads in the paintings was a punning self-reference…This, incidentally, is in Andrew Mummery's new space, which is Carl Freedman's old space: you should also pop over the road to Carl Freedman’s new space, in which Ivan Seal successfully takes the creamily seductive ambiguities of his would-be–still-lives to a larger scale.

The increasingly highly-regarded Italian photographer Luigi Ghirri (1943–92) was in the last and will be in the next Venice Biennale for the quiet series in which he slyly comments on how people - even though typically out of frame - interact with their environments. As a 1970's pioneer of the use of colour in art photography he has emerged as something like the European equivalent of William Eggleston. The  discovery of curious equivalences between palms, decorative birds and missing paving stones above is typical of his quietly deadpan observation, as is the delicate questioning of what is real and what is represented. This beautiful show presents 16 of the small format 1970's prints for which Ghirri became known plus five photographs from the 1980's, when he made more landscape-oriented work  with a larger format camera.
_________________


I lose track of how many artists have cast objects in resin to achieve a double-take of some sort - and yet Miles Thurlow achieves new effects in a site-specific show in what was formerly Limoncello's space (Limoncello – do keep up! – is now where the Russian Club used to be). 'All the Gods' (one of three sculptures in a show which solidifies the momentary) casts monumental blocks of polystyrene to three effects: challenging the gallery by taking up the maximum possible mock monumental space; drawing attention to painterly aspects of blobs, ripples and leakage; and reversing (yet imitating) Fischli & Weiss's deceptively light versions of reality made from polyurethane - Thurlow's two blocks weigh an unreal 150 kg each.

Quite apart from the fascinating retrospective of Man Ray's portrait photographs (to 27 May) the NPG often has interesting new displays. If you share my view that Patrick Heron's work was at its most interesting in the late 40s when he was on the brink of his signature style, then the display of preparatory paintings and drawings which preceded his well-known portrait of TS Eliot is well worth catching. The approaches range from relatively straight to cubist to imitation still life (Heron recalls registering Eliot’s ‘faint surprise’ at hearing his head likened to a coffee-pot) - and you can catch Heron's version of himself in room 31.

On-trend (I’ve just seen his triple (!) site show in Berlin) Columbian Oscar Murillo takes over galleries as studio-come-performance-come-party spaces, constructing low platforms on which canvases take shape amidst the mayhem, picking up dirt and wear along the way. Here Murillo also references a sweet factory in which family members have worked, including a film of rather visceral confectionery production. Under and around the platforms, the floor is copper sheeting, which captures more movement by inviting the visitor’s scuffing. The energy is impressive, and the resulting paintings catch that in gritty yet aestheticised slogans and scribble, akin to abstract expressionist Basquiats. I’m not sure what Bartolomé Esteban Murillo would say, but Oscar’s 18th century namesake also shows well in his parallel run in Dulwich... 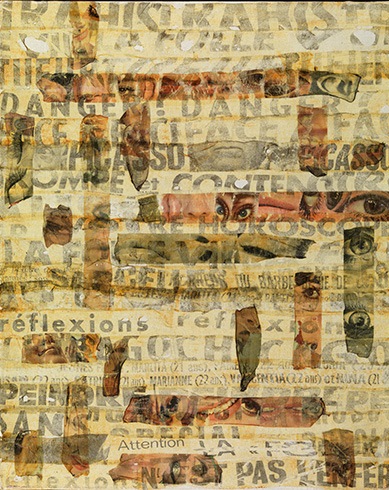 
Gil J Wolman (1929-95) was a co-founder with Guy Dubord's Letterist International in the 1950s: he was involved in any number of radical art actions, but was excluded before it mutated into the Situationist International (see http://www.macba.cat/PDFs/acquaviva_eng.pdf for an account of his life and work). From 1963 he developed the technique of 'Scotch Art', for which he applied strips of Sellotape to magazines, lifted away images and texts, and then applied them onto canvas. That resulted in distinctive collages shot through with the chance omissions caused by the process. Here Wolman is neatly paired with better-known French contemporary Jacques Villiglé, who exploits the ripping off of layered posters in what is in some ways a reverse of Wolman's procedure of applying the torn-away elements.

This divertingly-themed show in Massimo de Carlo / Carlson's refurbished space could have been called  ‘A Brief History of Foreign Spots, Stripes and Holes’, as the obvious British candidates (Hirst, Hodgson; Riley, ; Hepworth, ) are absent. The stripes have the most vibrancy (Ned Vena’s cunningly misaligned targets), the most subtlety (Steven Parrino’s folding of a monochrome being considered enough to count as two stripes) and the most presence (an unusually sculptural Daniel Buren from 1989, using wood –  it’s also, by the way, worth catching Buren’s Luis Vuitton fit-out on Bond Street). That’s not to denigrate Dadamaino’s holes, Dan Colen’s spots made from hundreds of studs or the unofficially-included multi-mirror piece by John Armleder which you can see in a side room (much more of him at the new Dairy Arts Centre).

Images courtesy of the relevant galleries and artists + The estate of Patrick Heron (Study for a portrait of T. S. Eliot, All Rights Reserved, DACS, 2013)