PENONE AND THE TREES

Giuseppe Penone: The Hidden Life Within

As Giuseppe Penone's year-long occupation of the Whitechapel Gallery comes to an end, it seems timely to consider him in the context of an excellent new book...


This substantial book celebrates ‘The hidden life within’, an installation of new work by Giuseppe Penone which inaugurated the Art Gallery of Ontario's new Galleria Italia in late 2008, and remained on view there until early 2012. Penone chose to work mainly with wood, in keeping with the new and unusual architecture of the Gallery, which is like a towering upturned boat made of Douglas fir and glass (I was there just after the exhibition closed, and can imagine the effect).

The book, however, goes well beyond the show's contents to provide an impressively illustrated overview of Penone's practice, with a particular emphasis on his work with trees. It includes an insightful memoir/essay by Germano Celant, the writer who helped define the origins of Arte Povera; a long and illuminating interview with the artist; an essay by French art historian Didier Semin; and Toronto-based art and architecture writer John Bentley Mays' thoughts on the installation itself, which is well-enough illustrated here to provide an ersatz viewing experience. There is also Penone’s poetic ‘Liturgy of Wood’:

‘The clarity of the well-traced path is sterile.
To find the path, walk it, probe it and bushwack through the brambles: this is sculpture.’

Penone has been well served in English recently with several monographs and the translation of his own writings - but the forward is not out of order in claiming this is the most ambitious publication on his work to date in the language.

Celant emphasises Penone's rural background: whereas American land art created a ‘mediation between the wild landscape and the super industrialised civilisation’, Penone integrates himself with the landscape, recognises its traces of human history – from farmer’s to hiker’s – and cedes control of the outcome of his work to ‘the growing of the tree or the interweaving of the branches, following their rhythms and flows' to produce 'an art that continues to happen’. In so doing, he ‘transforms the sculptures into an essential form, which takes shape naturally and expands the sculptural process by introducing a natural dynamic.’ Penone says that he wanted to work with the elements he knew most deeply – the river, the wood, the forest – ‘with which I had a strong relationship when I was a kid’.

Didier Semin contributes an intriguing essay which draws from philosopher Thomas Nagel's famous article "what is it like to be a bat?' and Roger Callois' remarkable theory that, far from mimicry and camouflage being an evolutionary advance for defensive purposes, animals which seek to look like plants are actually dreaming of an earlier and more peaceful state, making them artists rather than fighters.  He suggests through that analogy how Penone’s  sculpture is haunted by the parallel dream that a man might know what it is like to be a tree.

John Bentley Mays concentrates on the hidden life within of the show's title: how a tree retains the ‘essence of matter’ (Penone) - 'an inner structure that can be deformed by harvesting and sawing and milling, but never wholly obliterated' (Mays). He sees Penone's art as a means of 'figuring forth'  the hidden life he finds in the heart of everything that lives, in what might be seen as a modern version of Platonic form.

Those are interesting viewpoints, but Penone’s own words in an extensive interview have the added advantage of a direct connection to the work. He has, for starters, an interesting definition of art as a perfect product, that is, one with no existing demand. An imperfect product, in contrast, is one for which demand already exists. Art, then, ‘represents the thought that is not yet known, a product which we have not felt the need for ‘. To find that product, Penone sees the role of the artist as being ‘like a priest who performs rituals’ so that ‘the artist becomes the official of this ritual’.

Like a priest, Penone uses traditional materials (more so than is typical of Arte Povera) and is keen to explore their life: ‘bronze, marble, earthenware, wood… it is true that these are materials which have been used in sculpture for centuries, but I use them in a different way.’ Less traditionally, he uses resin as the ‘perfume and blood of the tree’, a phrase illustrating how the artist is at his best when explaining the thoughts behind his works. Let’s take three of his major series.
First, those works in which thorns are attached to canvas so that they make a pattern which ‘comes from the mark of the skin. When the skin touches a surface, it leaves a mark that is an image of all the points of contact and, consequently, this is the image of the points of sensitivity. I magnified a mark, drawing it on the canvas with some thorns I used thorns because they suggest the sensitivity of the skin. It is surprising the precision with which it is possible to localise a thorn that you have in your body.’

Second, the comparison between a found boulder, formed by the river, and a visually similar boulder sculpted in the studio. The definition between fluid and solid is uncertain, and depends on the temperature and the time. The actions carried out when someone is carving a stone are similar to the actions exerted by the water in the river.

But perhaps we should conclude with Penone’s most famous stream of work, that which discovers the sapling tree within a beam. It is, says Penone, ‘a tautology at heart, but it can also be interpreted as an attempt animate the ‘minimal’ form of the industrial wooden beam, disclosing the organic shape that produced it’.  That seems to be what Penone is ultimately about: connections - and in particular, exploring those between nature, what people make from it, and the people themselves. This book helps the reader make those connections and explore the hidden life within.

Penone works across a wide range of natural forms, including notable use of leaves and thorns as well as several streams of work which use the fundamentals of the tree in a very direct manner. 'The Hidden Life Within' discusses and illustrates these works effectively. a partial checklist of which might be as follows: 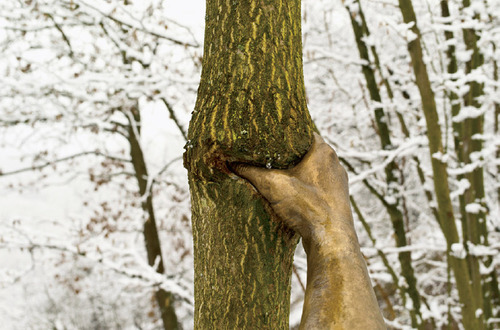 Interventions in the growth of trees

Planks whittled back to reveal the tree within 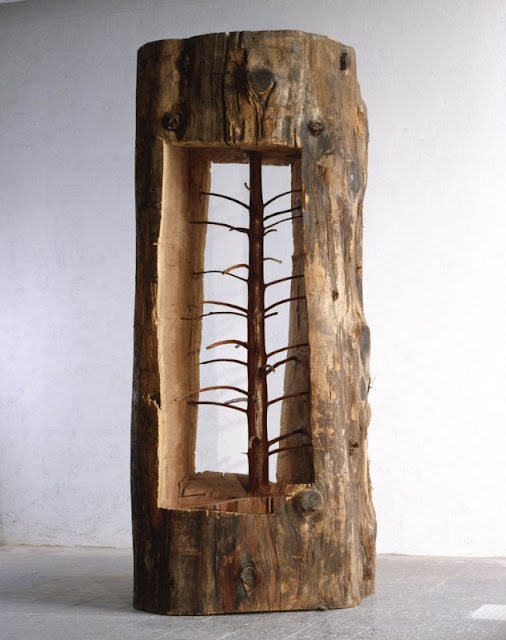 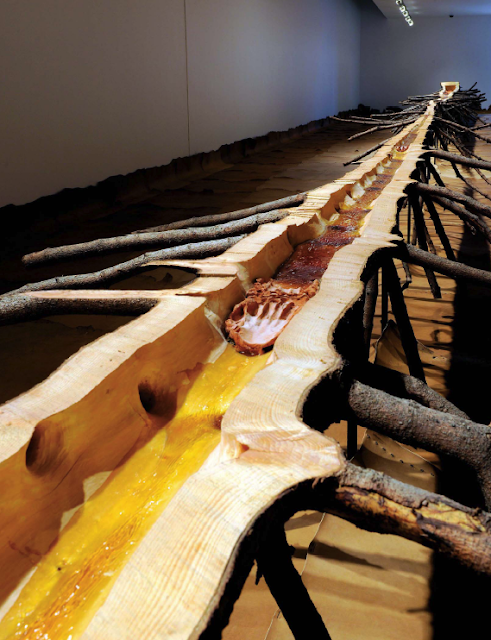 Trunks with channels, filled with sap-redolent resin, cut into them. Instead of carving around the sapling in the core of the tree as in ‘To Repeat the Forest’, the negative of the form within the tree is revealed and filled with resin – as if to illustrate Penone’s assertion that ‘the two perfect states, liquid and solid – a totality of image – produce sculpture’. 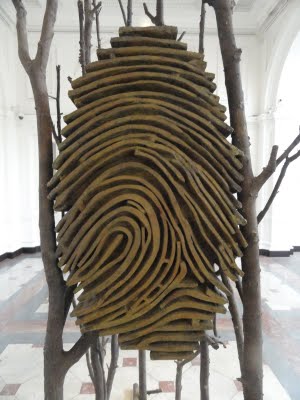 Drawings in the form of tree rings, but using fingerprints 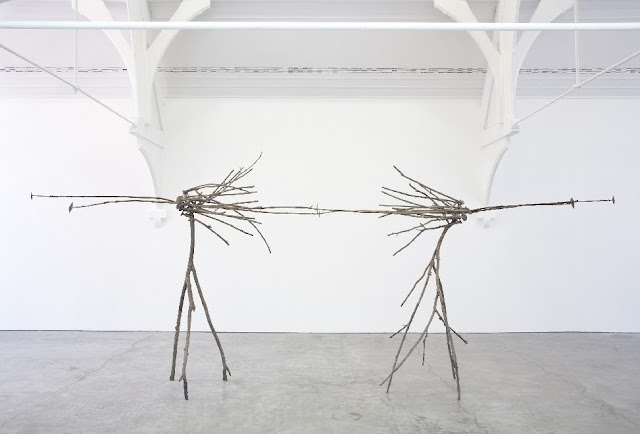 Works which use the reaching out of branches for light as an analogy for sight. Here, says Penone, two people look at each other and so he ‘starts the branches in the brain, basing the work on the gaze’. There is also an echo of early action which twined three trees together ‘as if they were in conversation’. 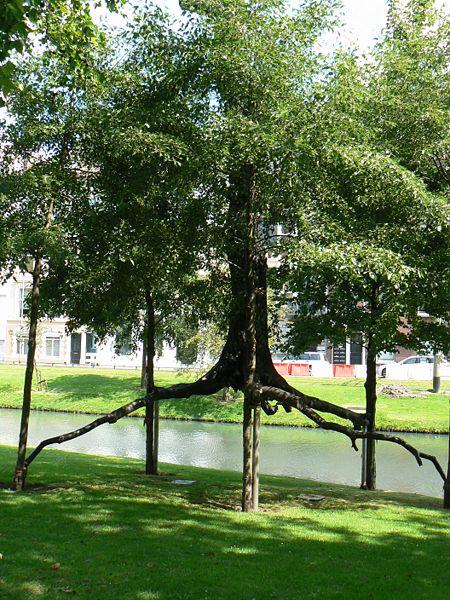 Bronze casts of trees, held paradoxically aloft by their roots. Penone believes an uprooted tree is already a sculpture, and is ‘the horizontal perspective of the eye, contrasting with the verticality of its being’. 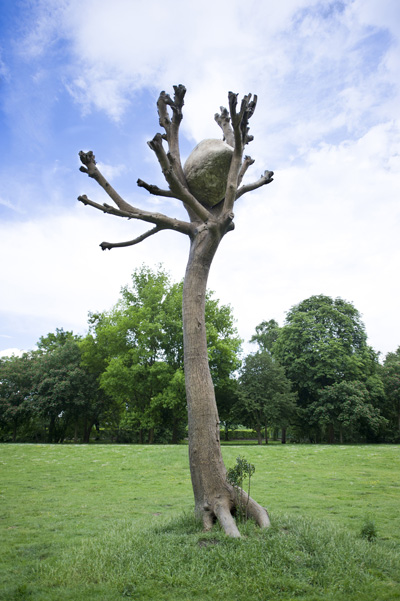 A bronze tree holding a boulder in its branches, has made the Documenta 2012

Work with bark, notably that which draws an analogy of skins by combining it with leather. Animal skin meets tree skin as Penone covers tree trunks with water-softened leather which keeps the form of the bark when it dries. ’It is as if you are inside the tree’, says Penone, who also wanted to make evident how ‘there is always a space between the hand and the surface the hand adheres to. It is the thickness of the waxy grease of the fingerprint'. 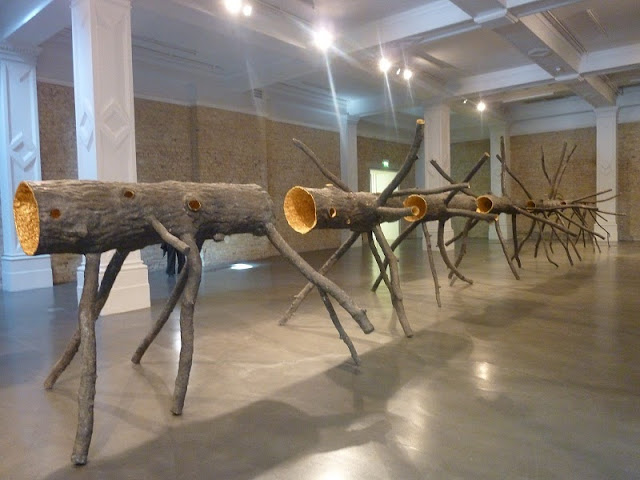 The Whitechapel installation cast an empty trunk with golden bark on the inside and the artists fingerprints standing in for the bark on the outside.