AN ABSTRACT OF PINTA

With 60 galleries, Pinta, the Modern & Contemporary Latin American Art Show at , was a big enough to provide for differing tastes while small enough to navigate with ease. Not surprisingly, the most consistent quality was in the solo shows celebrating the influential veterans Cesar Paternosto and Luis Tomasello; and in the ten solo project booths curated by Catherine Petitgas and Kiki Mazzucchelli. But there was plenty of spirited work on view elsewhere.  Looking at that which – broadly speaking – adopted the language of painting, there were two main camps: geometrically and kinetically inclined abstraction in the South American neo-concrete manner, which was the dominant mode; and more emotionally and politically charged representational work. Much of the former was successful within somewhat predictable limits; the latter was – to be kind – rather hit and miss. Yet there was plenty of interesting work, much of which combined the best of those tendencies by charging the abstract with the personal or political.  If, however, you think of a ‘painting’ as a single, traditional surface – such as canvas – covered in paint to depict something recognisable, then my eight choices might surprise you: not one of them meets that definition!  Most aren’t even close.  Yet perhaps that suits Pinta which, though well-programmed and endearing, has its eccentricities: no cloakroom for bags or coats; no printed map; open Wednesday-Friday but not at the weekend... 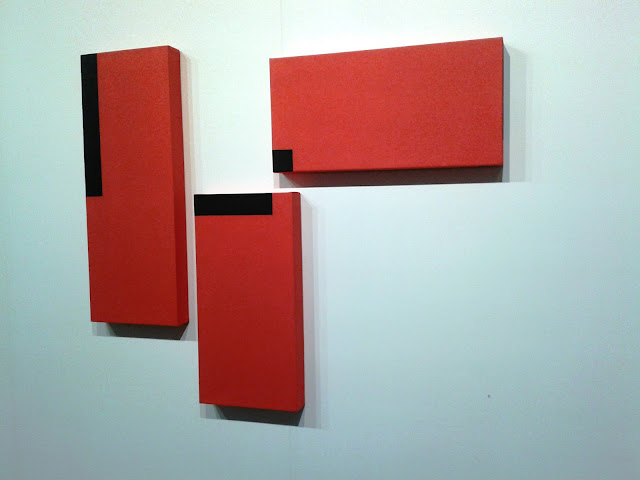 Two fine long-running abstract painters were highlighted by solo shows: 98 year old Argentine Luis Tomasello, who has often shown in ; and 82 year old Spanish-based Cesar Paternosto, who’s less well-known here. His triple architectural wall installations emphasise the space between elements, their inter-relationships, and their constructed depth, encouraging oblique viewing which promotes the side views as much as their austere frontages. Such has been Paternosto’s consistency over the years, one assumes he is demonstrating a sufficient affection for the margins to make a mild irony of his central billing here. 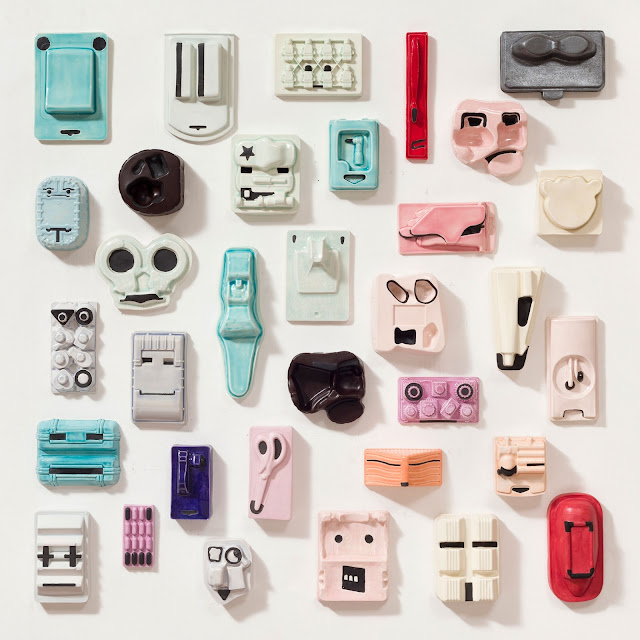 For twelve years the Peruvian artist Patti Camet has been collecting packaging – from phones, chocolates, pills, eggs, scissors etc – and casting them in ceramic. Here a square metre of them, mounted on pine board, bring anthropomorphic qualities to a combination somewhere between still life and abstraction. It's one of a series which anthologises various different emotions – by way of email emoticons – in this way. Attractive, for sure – but are we, then, no more than the sum of what we’ve consumed? 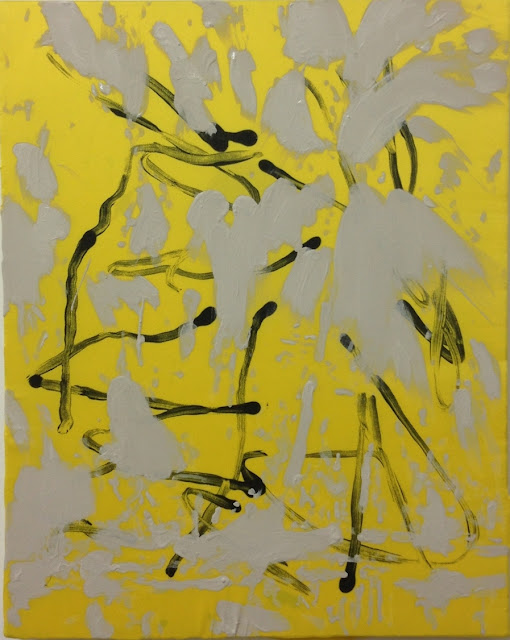 This freestyle riff on a Puerto Rican jungle by a young  based artist born in  makes plenty of play of its raw linen background and the mud, collected from the site, which is smeared over much of the acrylic. There’s a long lineage of abstracting from trees, and I saw this as a refreshingly spontaneous take on Mondrian’s more studied way of tackling the theme. There’s also a political protest built in, consistent with Arce-Espasas’ broader installation practice, which often exposes the falsities in the apparently paradisaical: for what does deforestation produce but mud?

What looked like infestations of mussel shells or sections of ruched curtains solidified into scallopings of petal turned out to be… paint hardened over metal armatures (which, incidentally, had a comparable elegance from the back). Argentine Ivana Brenner made a good first impression in  through her fungal way with what looks like ceramic, and so played well against Livia Marin’s deconstructed and stitched up crockery at jaggedart. Brenner’s work is alluring, yes, but on closer viewing unnatural enough to discomfort. 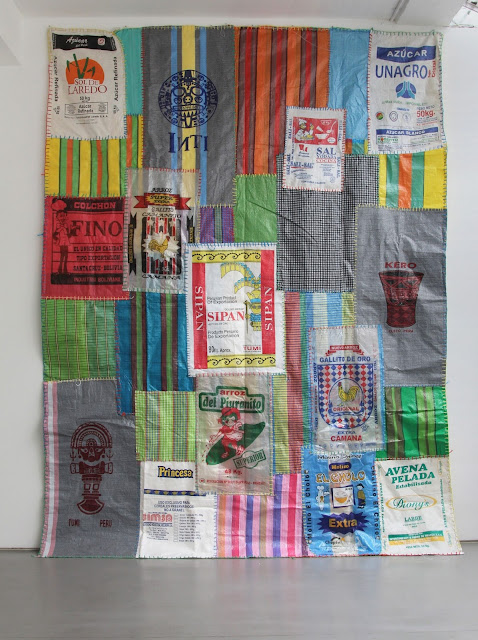 The Peruvian artist’s solo booth had sculpture, drawings, and a huge collage of agricultural sacks which moved into painterly territory. Composition II cunningly combined branded sacks with a Pop art feel with unbranded sacks with cheerful patterns which happened to echo a good few of the Fair’s abstract paintings. The patchwork result also delivered on Garrido-Lecca’s wider strategy of importing personally infected everyday Peruvian life into a western art context: such sacks are indeed made into blankets and curtains in her home city of . 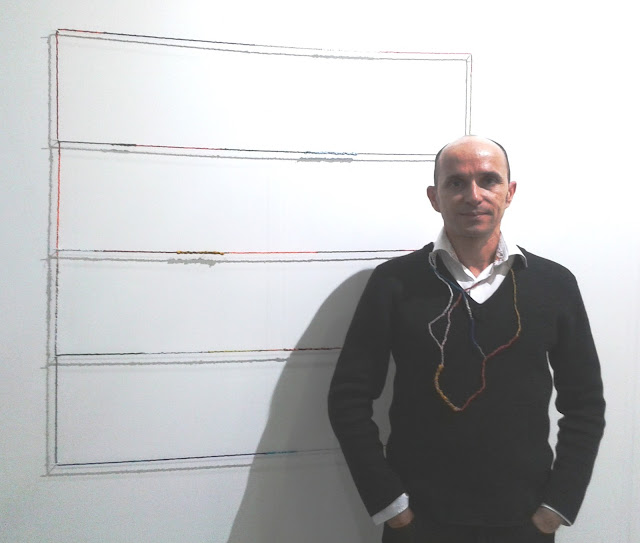 Célio Braga’s compositions were the stand-out among many dissections of the grid: they  caught the flux of personal history by using strips of his friends’ clothes and characteristically Brazilian ‘wishing  ribbons’ (tie round wrist with three knots: make one wish per knot, and they’ll come true when the bracelet wears away and falls off). The resulting barely-there paintings-of-sorts are named for their length – the longest one framed the booth’s entrance – and have the ability to change formation: as above, the artist wore one around his neck. Hung slightly away from the wall, shadows magnified their vulnerable irregularities.

If you think Toby one of the less Latinate names, you’d be right: Christian’s a  artist who qualified for the fair by making work in . This is from a series of texts the upcoming writer and artist wrote on blackboards, developing his thoughts but then clearing their grounds the next morning. Drawn to the accidental results, he preserved them. The mop was wet enough that a cloudy whiteness resulted as the chalk was wiped (hinting at Dubuffet’s 'Texturologies' of soil); and old enough that it deposited bits of string, here accidentally forming what might be read as the artist’s initials (recalling Antoni Tàpies’ use of ‘AT’). 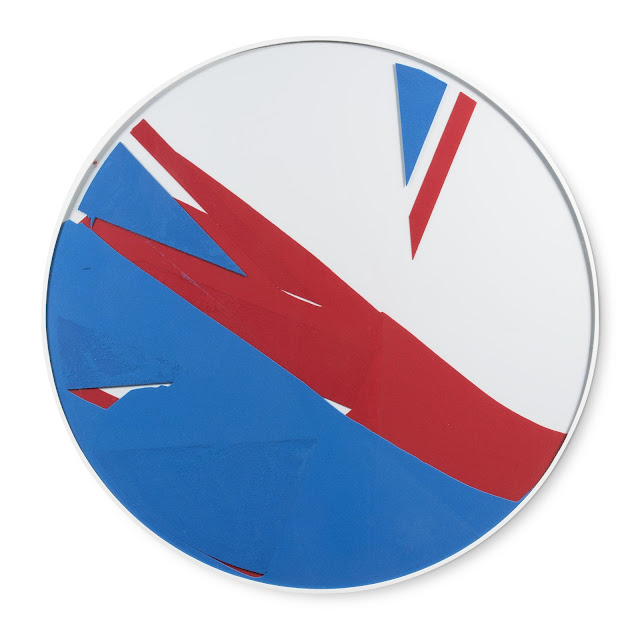 There was quite a bit of kinetic art at Pinta, bringing to mind the Venezuelan lineage of Jesús Rafael Soto and Carlos Cruz-Diez. Their countryman, Manuel Mérida (born 1939) may well have been the leading crowd-pleaser with his combination of spectacle and respect: a Union Jack themed set of four rotating circular paintings. There were monochromes in red, blue and white plus a threefold combination. They spun at the same speed, but due to the varying mixes of wood particles, sand or chalk acting as carrier behind their glass fronts, the pigment inside formed and unformed shapes at differing speeds.