There will be mass Remembrance Day crowds for the ceramic poppies at the Tower of London this weekend. Spectacular and affecting as that may be, there’s a case for avoiding the crush in favour of exhibitions which appropriately capture the key poppy elements of elegy and multiplicity.

Walead Beshty: A Partial Disassembling of an Invention Without a Future: Helter-Skelter and Random Notes in Which the Pulleys and Cogwheels Are Lying Around at Random All Over the Workbench @The Curve Gallery, Barbican to 8 Feb


Cyanotypes are intrinsically evocative of the early period of photography. To recap, they are  made by placing objects (or transparencies)  on paper (or another porous surface) which has been coated with the UV-sensitive material potassium ferrocyanide. That’s dried in the dark, then exposed to sunlight and washed in water to fix the object’s silhouette – most famously the algae captured by Anna Atkins in the 1840's - against a cyan-blue ground. It’s hardly fashionable now, yet there are currently two London exhibitions of multiple cyanotype activity.

At the recently opened Ditto Gallery, attached to a print works and publishing company, the French photographer Thomas Mailaender has used the longest roll of paper currently industrially produced – 10 x 1.5 metres - as the ground on which to make multiple cyanotype’s in a custom built dark room. A film of the process is shown alongside: it involved Mailaender placing transparencies from his own extensive and eccentric collection of found images on top of the paper, along with everyday detritus and tools from his studio: coins, nails, straws, light bulbs, rubber gloves, nails…. Thirty of the images cut out from that piece of paper make become most of the show. The effect is to make us look differently at  a pre-digital cache of quirky images by presenting them as faux historical artifacts and - indeed - what may become worthwhile future records of the digitally lost.

Meanwhile, Walead Beshty shows what becomes a 19th century-style panorama made up of some  7,000 cyanotypes at the Barbican’s consistently innovative Curve Gallery. Beshty's whole practice is about the relationship between forces - hence, for example, his sculptures of Fed-Ex Boxes showing the effects of transit. Here he set out to make a transparent self-generating depiction  of the mechanical and social relationships which brought this show into being: eleven months of studio activity in LA plus a month based in The Barbican while installing were caught in 12,000 cyanotypes made on and with all the paper items passing through Beshty's life - communications with museums, dealings with employees, junk mail, exhibition invites, newspapers, medical bills etc - and the objects he used or got left with - scissors, pens, broken items . He then set out to put this evidence of activity and waste product on the walls using two 'dumb rules': chronology, and fitting as many as possible into the space available. The result is a 7,000 cyanotype trace: a set of 41 books presents all 12,000 at 1:2 scale, and the untweetably long title comes from a proposed lecture which Hollis Frampton never gave, so representing a space of possibility.

Cerith Wyn Evans at the Serpentine Sackler Gallery to 9 Nov 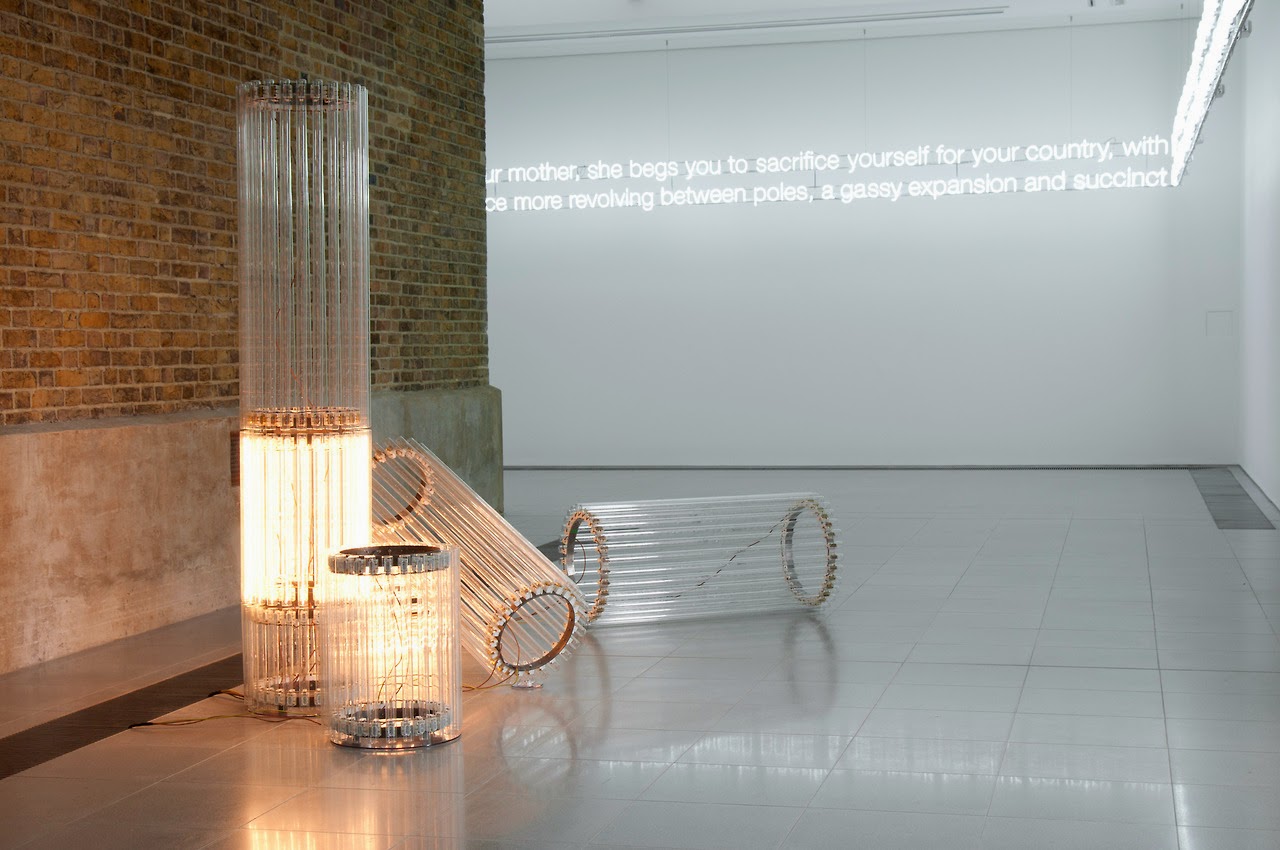 Remembrance Sunday is the last day to see Cerith Wyn Evans' installation, which is appropriate as the note is acutely elegiac. He has summarised its effects as uniting ‘Site/Sight/Cite’: the site of the gallery, the perception of sight and the citation of references. The beautiful installation brings Wyn Evans’ ‘greatest hits’ together in concert:  elaborate retro-chandeliers limning and fading to evocative texts (here on Javan puppetry), broken versions of his incandescent columns, glass flutes which play themselves, and a neon text in soft white, here the longest I’ve ever seen, running all the way around the substantial space. There’s also a garden of amethyst and rotating shrubs, vertical lines of neon characterised as ‘leaning horizons’, various remnants of film-making equipment, and photographs taken by his father. 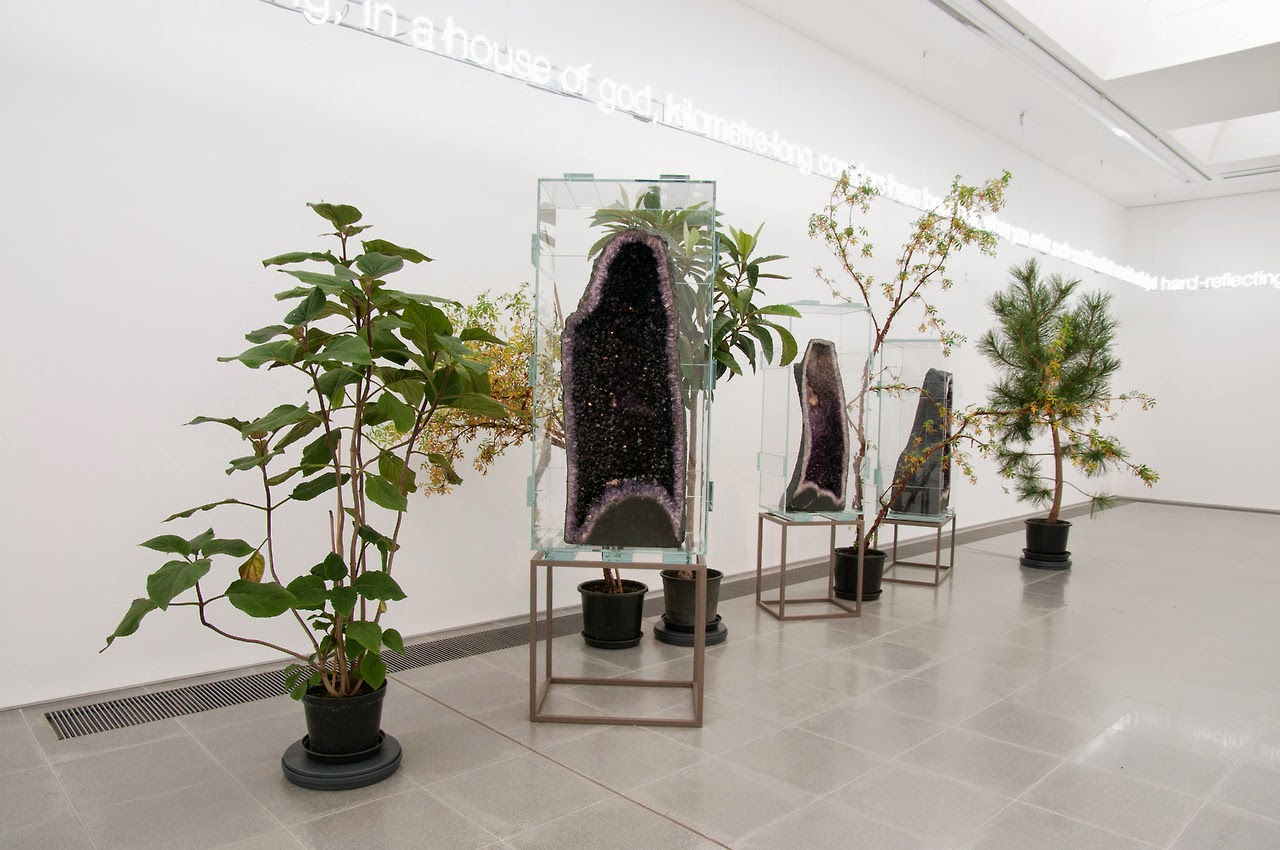 All this convokes an intimate yet anonymous melancholy. Ian Hamilton Finlay comes to mind for how the dominance of the present is challenged by the active casting forward of the past, even as it is memorialised. There is the degree to which – perhaps as in any retrospective, but it feels especially strong here – the memory of Wyn Evans’s previous display of related works may be part of what we see: the broken columns of lighting trigger the intense flare of seven full columns in White Cube’s former electrical substation in 2010; the call and response of flutes took me back to those sounds against the backdrop of the sea at the De la Warr Pavilion, Bexhill in 2012. 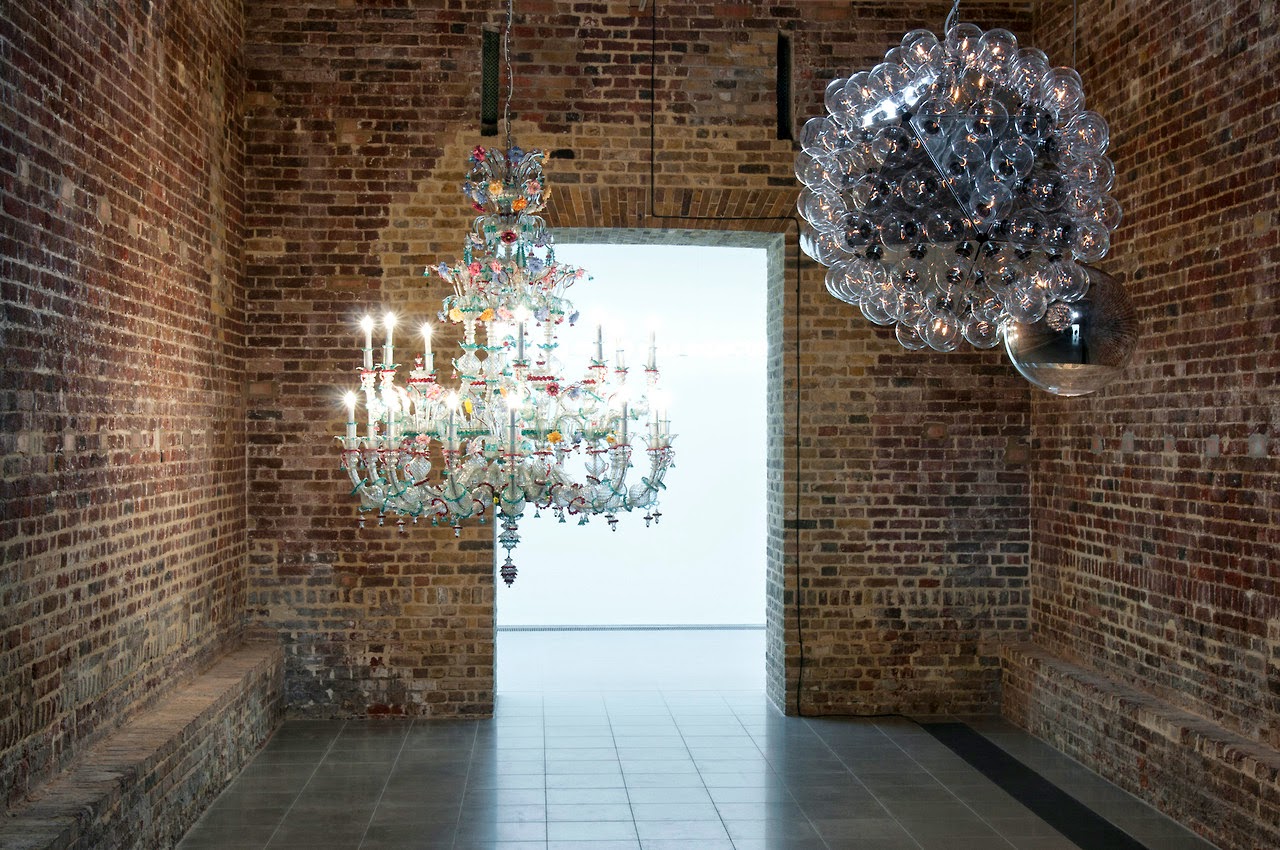 Wyn Evans' aims seem close to Robbe-Grillet’s generation of atmosphere through intense surface scrutiny, though I don’t think you need to track the artist's engagement with history, philosophy, literature and film to pick up on this. The long text neon moves from descriptions of alternative light sources to a letter from a mother in which she ‘begs you to sacrifice yourself for your country’ – as if it weren’t too late.