Smoking may seem to be on the way out (in the UK 54% of adults in 1948 compared with 19% now) and yet…  Maybe it was the more liberal view of smoking still evident in Switzerland and Germany; maybe it was the politics of smoking promotion in the third world, where sales are still rising; maybe it'spart of the general fascination for things retro whihc leads some artists to typewriters or analogue film; maybe it was the lingering influence of Pavel Büchler’s 1,156 photographs of Work (All the cigarette breaks), 2007-14, which currently fills a wall of the Ikon in Birmingham, so making a work out of not working… Whatever the reason, I spotted ten interesting works in which cigarettes were central, though I didn’t see any using e-cigarettes. 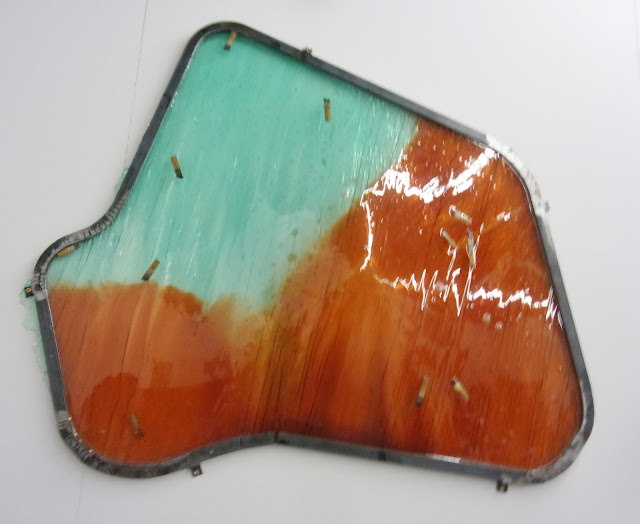 The skylights in Beloufa’s current show in Paris are covered by translucent resin panels into which Beloufa tossed the cigarettes he smoked during the making, so recording the time of production in the most direct parallel to Buchler’s record of downtime. Given the political tenor of the Frenchman’s work as a whole, we can reasonably read some defiance of expectations and empathy for the downtrodden, lifted above by a gesture which was transferred to the wall here, as one of the panels became a painting of sorts. 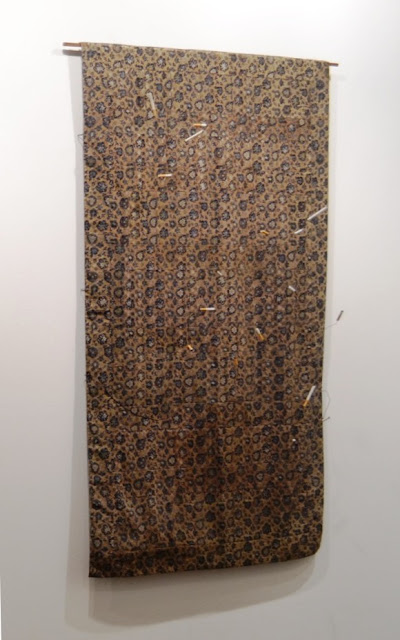 Maverick American David Hammons refuses conventional gallery representation, in line with his preference for street rather than art audiences, but his re-purposing of detritus has achieved iconic status nonetheless: Salon 94’s stand including his elephant dung sculptures was a big hit, and over $1m was being asked for this wall piece of half-smoked Lucky Strikes held on wires in front of a 17th century Buddhist monk’s robe. That makes it a chandelier, though I guess the smoke might offset the modest illumination. Some cigarettes were lit in advance of the (no smoking) fair in order to generate the ash which Hammons likes to appear below this mixture of street and spirit. 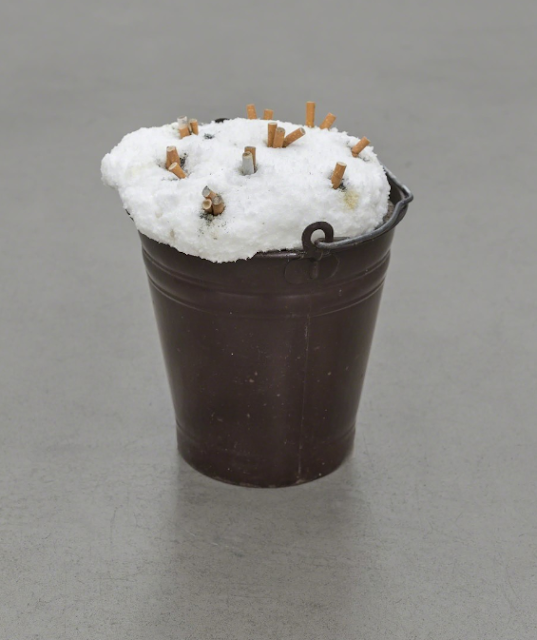 ‘Cigarette will be gone soon’, said the Berlin-based Dutch artist Marlie Mul in her 2012 show ‘No Oduur (Your Smoke Draws Me In)’ – ‘Cigarette is guilty, has apologised a thousand times’. Mul is interested in communication systems and in how contingently-produced items can reflect the society which brought them about. Hence her sculptures of air vents – or, as here, a snowed-up bucket – pressed into unintended use as ashtrays. They reflect the shifting social relations attached to smoking now that the huddle has been driven out of the building. Perhaps smokers have a right to feel prickly… 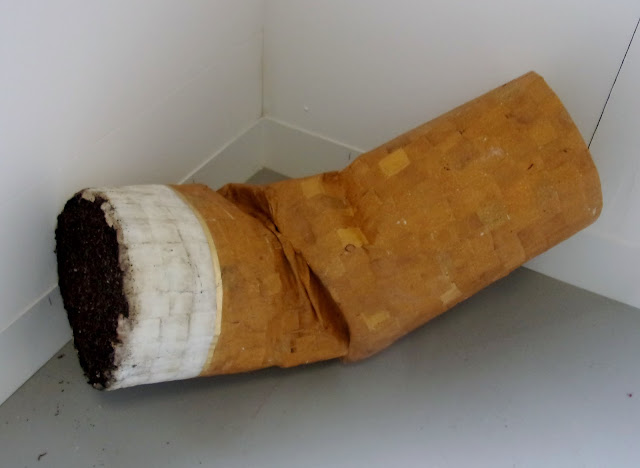 Puerto Rican Jesús ‘Bubu’ Negrón collects fag ends via street cleaners, from which he has constructed an ornate carpet, but here made a giant cigarette stub, containing I would think 5,000 individual stubs in what Thomas Bayrle would call a ‘superform’,. The title could I think be fairly rendered as ‘pants caught between the buttocks on the seedy side of town’ 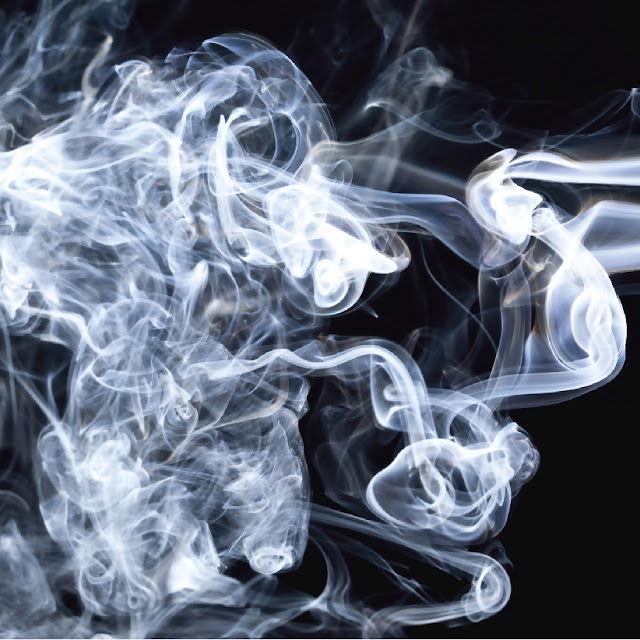 Pia White’s tapestry is big and heavy enough, and the process of transferring from digital photographic plan to woven outcome substantial enough to give a weighty presence to the emphemerality of cigarette smoke, tying its illusive qualities firmly into the quotidian. This series follows on from previous tapestries the digital production and heroic scale of which were in the service of throwaway  consumer items. 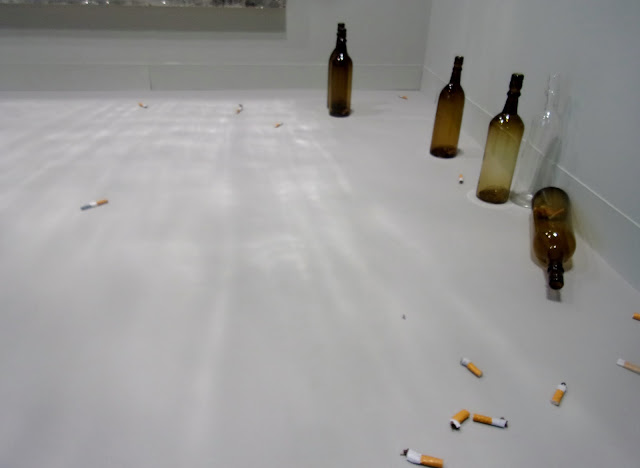 
At Massimo Carlo. There seemed to be party remnants in a space enclosed by large paintings by Jacob Kassay (as glipmsed above) and Gunther Forg (the latter, who died in 2013, was prominent on many stands). In fact, the scatter of bottles and cigarette ends were Murano glass castings and plastic-based sculptures by Dan Colen, also known for his series of paintings featuring burning candles from which the smoke emanating forms  disarming messages. Wild Irish Rose is something of a wake both for his friend Dash Snow and the party nights which changed following his death in 2009. The collection sold for a non-too-shoddy £70,000. 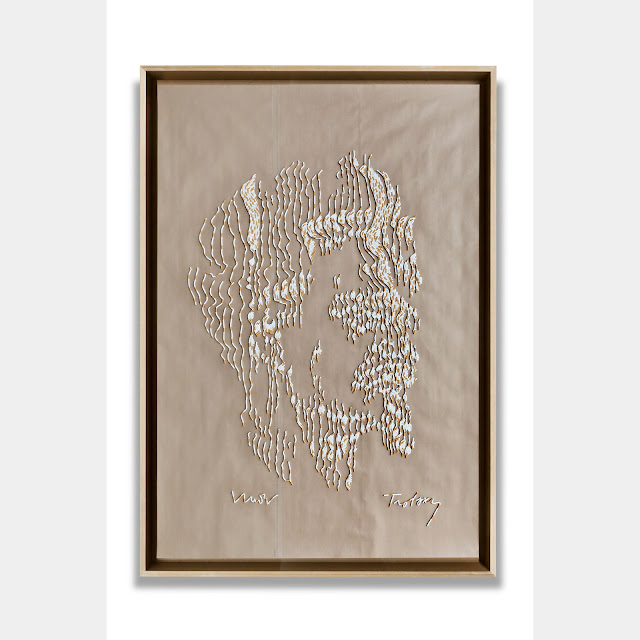 Cigarettes and wire on kraft paper

If any artist can be said to ‘own’ the cigarette as material, it’s probably Lucas who uses them as both a short cut to a laddish vibe (see their orificial placement in Venice) and to suggest, by drawing with them, that smoking and drawing are comparably inward and obsessive activities. Her Mexican gallery had this appropriately mural-sized head resulting from a trip to Diego Rivera’s studio. They are, therefore, Mexican cigarettes which make up her version of a portrait of Trotsky as drawn by Vlady during the exile in Mexico which may have included an affair with Rivera’s wife, Frida Kahlo, and definitely concluded with an icepick. 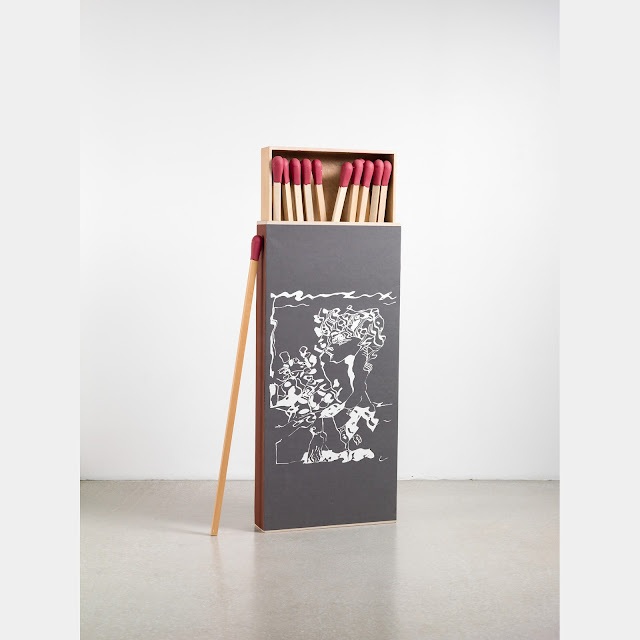 Raymond Hains, one of the nine signatories of the declaration for New Realism in 1960, is best known for his torn poster works. Actually his practice was varied, and included pop-style enlargements of boxes of matches. These read as pregenitors for the spark of artistic inspiration, but were also a tribute to his gallerist Iris Clert, who was known as the ‘incendiary brunette’ and persuaded firefighters to guard Hains’ first matchbox show. The boxes feature Hains’ own designs, though sometimes under pseudonym chosen according to the supposed country of origin of the matches: here, it’s a semi-abstracted portrait. 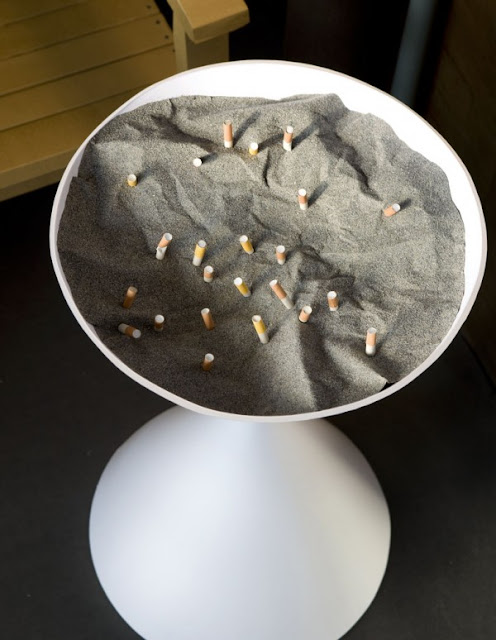 Dye transfer print, 80 x 77 cm
The institutions joined in, too: the Schaulager was showing a cigarette partly-painted by Joseph Beuys as well as Thomas Demand’s less political, more everyday series of photographs, based not on news stories but on casual camera phone shots of his own posing as 'daily rushes' from filming. Having elaborated these into paper sculptures to photograph and then destroy in his usual way, Demand commissioned the images to be printed with the contrastingly permanent but increasingly rare dye transfer process. 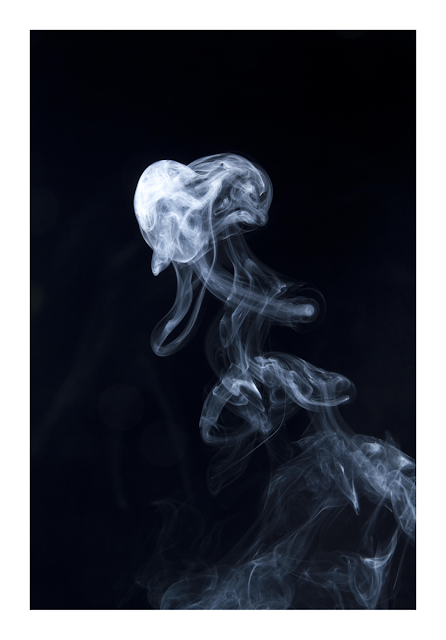 Gavin Turk makes something more Freudian out of a source similar to Pae White’s, titling the large photograph of billowing smoke to suggest we might read something into it, given the chance we don’t normally have to take a fixed view in great detail rather than getting lost in its continual drift. Maybe you could read fixed smoke in the manner of tea leaves? The frozen smoke has a definite beauty, but is that just cover for its destructive undercurrent, whether following an explosion or with reference to our lungs?