There’s a good balance at Frieze this year: between showy and quiet work, and between heavy and light themes. I would characterise my selections - suitably for our times - as somewhat disturbing. Yet they're by no means outright scary or pessimistic – there’s too much beauty, invention and wit for that… 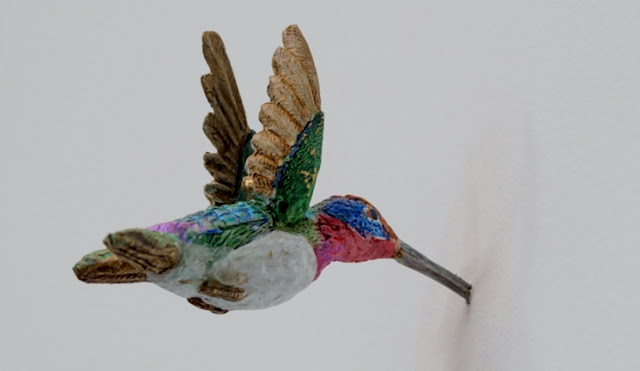 Brazilian sculptor Efrain Almeida deals with nature,body, sexuality and religion. He showed an installation (£42,5000) of ten polychromatic bronze hummingbirds, painted in natural-looking colours of the artist’s devising. They were life-size - 12 cm long - and attaching them by their long beaks made good sense. You could imagine them sipping at flowers, but they did also appear to be flying into the wall, next wingbeat kissing the void. Adding to the off kilter effect was what Almeida showed alongside the birds: two unflattering versions of his fifty-ish, pot-bellied self, naked. 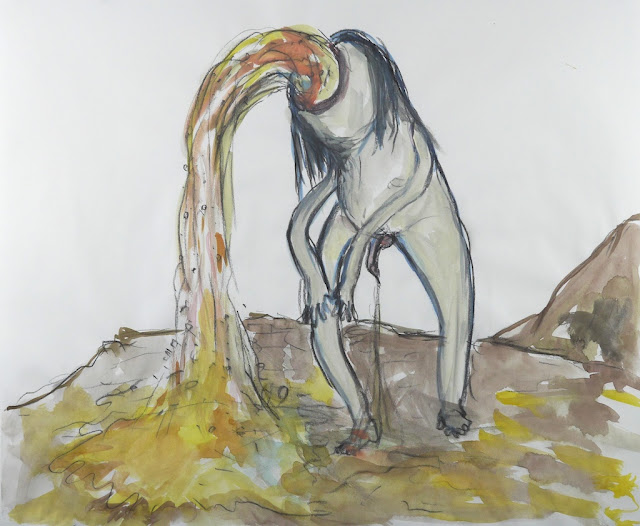 The Box teems with the energetically wild imaginings of three friends all living and working in LA, all making obsessive amounts of drawings - separately and in collaboration - 'in the studio, at the mountain cabin, at the dinner table'. They are the famous Paul McCarthy, whose contributions included two tables (£135,000) each set with ten manic scrawlings made directly onto placemats during meals; the scabrous writer-artist Benjamin Weissman, and - the youngest and least-known - Naotaka Hiro. His works in watercolours, acrylic and pencil, a comparative snip at £1,000 each, are lively and fluid – in the case of this dual expeller of liquids, rather literally so… 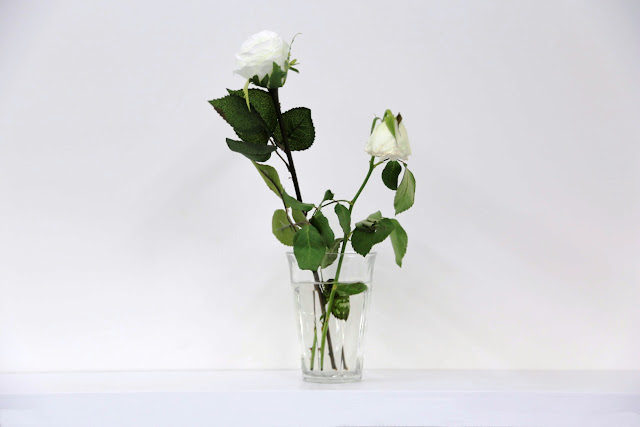 Two white roses share a vase by: one is natural, one plastic. They were hard to tell apart at the Fair, but with time, the difference will become increasingly evident, bringing a melancholy air to the Paris/Beirut-based Lebanese artist Stéphanie Saadé's typical mediation between real and artificial, which has seen her imitate odd bits of detritus and show them alongside their sources. These 'fake twins' also leave the potential purchaser (£3,000) to decide how often to replace the organic element. 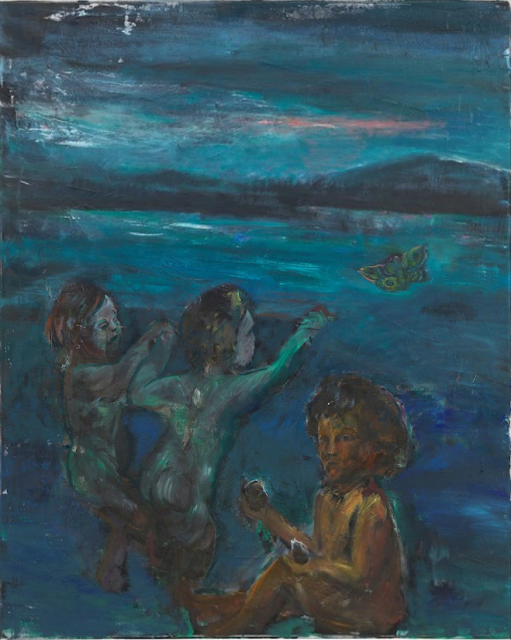 This should be a charming painting of three putti-like figures cavorting in the open air. Yet the colours are shady, the nearest child is playing with faeces, and one starts to wonder how innocent the other two's intentions might be towards the butterfly. The German painter Amelie von Wulffen  combines a casual style with dark undertones - you may have seen her watercolour of fruit sitting around smoking at the Liverpool Biennial last year. Here she also showed edgily cute little sculptures in modelling clay, which merged insect and angels. 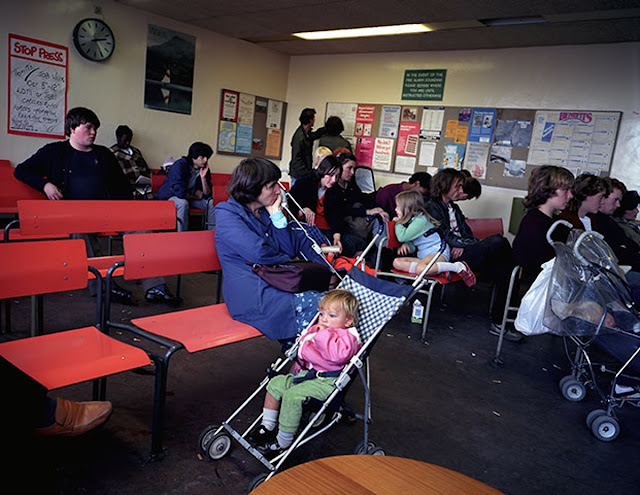 Paul Graham: Mother and Baby, Highgate DHSS, North London 1984, from the series 'Beyond Caring' at Anthony Reynolds, London / Booth A13

Anthony Reynolds dedicated what could equally have been a Frieze Masters stand to A1 – The Great North Road and Beyond Caring, Paul Graham's classic records of high unemployment Britain in the early 80's. The covertly-taken scenes of people waiting in Social Security offices, in apparent isolation from each other, are images of bureaucracy and inequality, boredom and despair which suggest potential parallels to the effects of the current Government's attack on benefits. 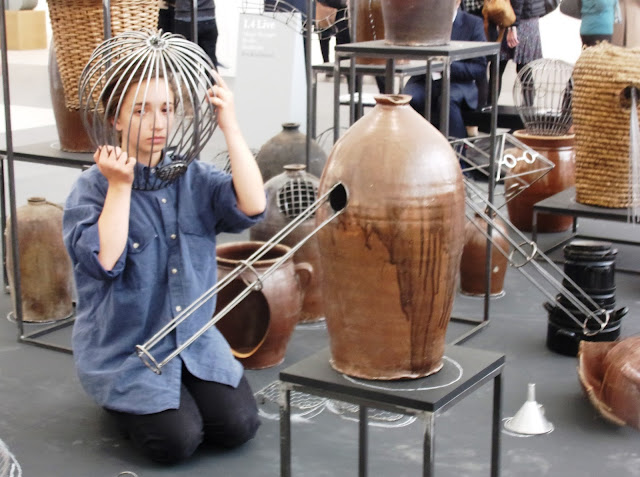 One of the 'Frieze Live' performances saw an actor  inhabit Czech artist Eva Kot’átková's  group of vases, some broken some, some temporarily fixed with visible supports, holders and holes.She moved around, trying then on as containers through which to speak, suggesting physical and psychic restriction and  yielding what  the gallery described as 'the three-dimensional database of suppressed voices,  stage on which part of the bodies and part of objects gain new shapes, meaning, and identity'. 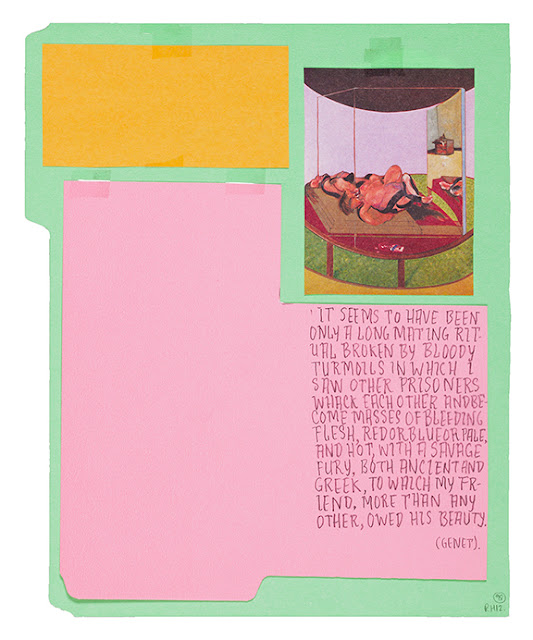 
LA based  Richard Hawkins showed a set of four collages (£15,000) which combine both visual elements and cultural infuences. The arrangements comes from the scrapbooks of Hijikata Tatsumi, (1928-86), the Japanese choreographer, and founder of the highly stylised and surreal Butoh genre of dance. Hijikata was much influenced by the history of western painting, as of course was Bacon, whose visceral nude is repurposed as engaged in perverted dance -  with its own surreal and stylised violence echoed by quotations from Genet. All three, of course, now connect to Hawkins.

The Norwegian writer and artist Matias Faldbakken has said he sees art 'as the opposite of work, non-productivity in a certain way'. This film works with left-overs from entertainment culture by alternating scenes from two sources which turn out to be uncomfortably linked: the European daily news broadcast 'No Comment' and the show 'American Funniest Homevideos'. The accidental slapstick of the latter, such as this boy about to be toppled from his perch -  suggests the foul-ups  behind the former, and perhaps the European consequences of American blunders. Will the plane, too, fall down? 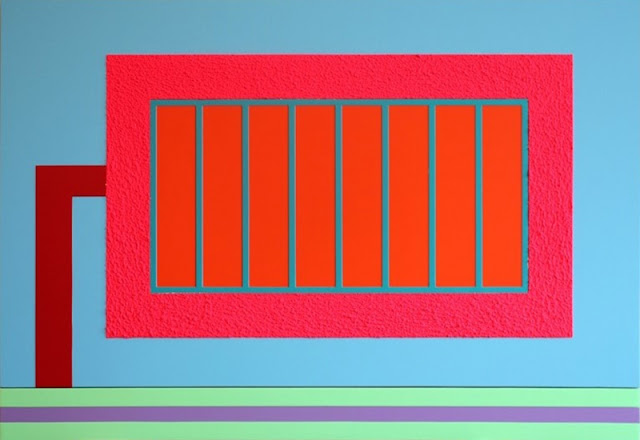 You might not expect much discomfiture from abstraction, but here the title signals an exception. It's getting on for three decades since New York artist Peter Halley decided  ‘that space we live in is defined by compartments connected by predetermined pathways’. He hit on a way to represent that: a combination of cool geometry and hot paint which politicised the minimalist square by making it stand for the prison cell to produce what Halley again thinks of ‘as a conversation between being connected and not being connected’. This recent example of a still-vigorous exploration (£55,000)  fairly burns off the wall, making an atmosphere of panic perfectly plausible. 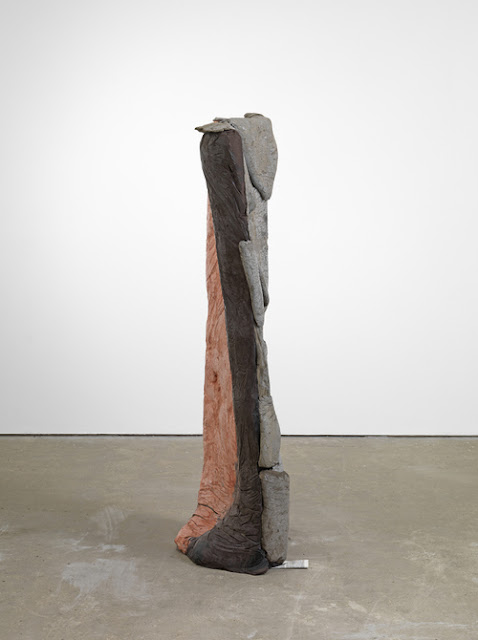 British artist Michael Dean produces sculptures linked to language, typically through  texts , dialogues of unallocated voices, or minimal, repetitious utterances of letters and words. Text and sculpture go hand in hand. Often the sculpture gives disguised form to letters, here (for £16,000) it's a concrete tombstone of tongues, big grey  ones on the front, a massive pink one behind, with a book which repeats hmm.. trapped underneath. Even hesitant pondering seems to be squashed. The tongues’ surfaces have an appropriate texture of crinkled would-be-sliminess, caused by covering the wet surface with cling film, then peeling it off. 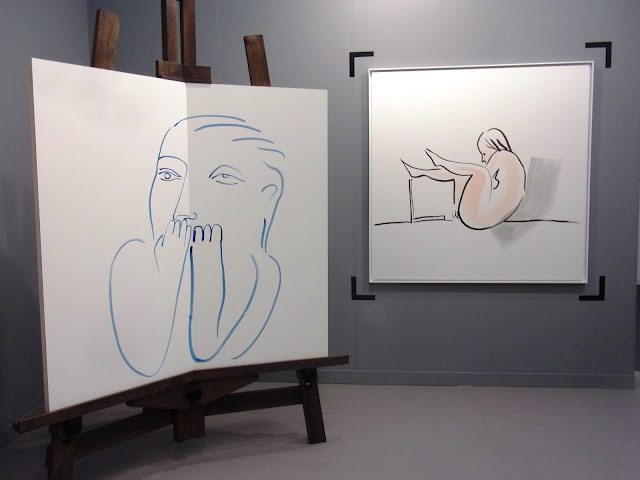