My guess is when you walk in to Tony Charles’ show at Platform A, you will think it is made up of painting and sculpture. You’d be right, but the twist is that you'll probably have them the wrong way round.

Let's look at the walls of apparent paintings first.  In fact, Charles points to the contradiction by calling them 'unpaintings'. He takes the standard industrial 8 ft x 4 ft size of aluminium panel and paints them with industrial gloss using the narrow range of simple shapes and clear colours typically found on  signage. That’s the painting stage done with.  He then sets about scraping off the paint with an angle grinder. Afterwards, he applies a layer of resin, which heightens the colour and the reflectiveness through which the works catch the light and respond to its shifts. Typically, Charles gives himself a set time to abrade a given panel with the apparent aim of scraping off all the paint. He's only ‘succeeded’ once to date, but often gets close. Paradoxically, though, the act of removing the paint leaves marks which have a far more painterly aspect than the original flat application of the gloss paint itself. So it's the removal of paint which makes them look like paintings rather than signs, but the results are arguably objects rather than paintings[i].  Moreover, the panels have a substantial materiality, the abrasions are themselves a subtle relief, and Charles’ mark-making often implies that he’s working on a three dimensional I-beam, with its flanges and web described by differing directionalities of the grind marks. Overall, then, there’s enough three dimensionality and objecthood in play to tip the unpaintings into sculptural territory.

There's a complementary logic at play in the apparently sculptural work Still Life Unpainted 2, which consists of ten aluminium gas bottles, the space available to them indicated by wooden rods. These started life as fire extinguishers, and again Charles has scraped away the paint, in this case entirely so.  We are left with three-dimensional objects of gleaming metal, but still Charles categorises these as paintings. How so? First, the removal of paint again leaves painterly striations; we can recognise the bottles as a classic still life subject, as in the paintings of the Dutch Golden age and through to Morandi [ii]; and the outlining wood suggests both a table on which the bottles can be placed and a frame if we look at the bottles as forming a painting (the ‘unpaintings’, in contrast, lack the traditional frame).  Moreover, the outcome reminds me of scaled-up tubes of paint, triggering the thought of another time when an industrial process had a particularly significant artistic effect: the 19th century trend towards painting en plein air, which facilitated the development of Impressionism, was made possible by the invention of the tubes which enabled paint to be transported conveniently to external sites.

The painterly language of scraping off paint, though it derives from the utilitarian construction and cleaning processes for making and maintaining machinery, proves surprisingly varied. Different movements and repetitions of the angle grinder build up distinctive patterns and rhythms akin to brushmarks; and while Charles might naturally use a big grinder (and disc) on a big work and a small one on a small work, keeping the marks proportionate to scale, he can also reverse that expectation. There is no mixing of colours, but the drag of the disc causes a sort of 'uncolouring' in some places, which leads to dirtier or more pastel-like patches. The process also gives Charles two separate chances to vary his compositions: through the initial painting process, and in the subsequent unpainting. Thus for example, the underlying geometry remains very visible in Fettled Section & SIgn, which has echoes of Barnett Newman’s use of the vertical ‘zip’, whereas little paint remains on Informally Dressed. Fettled Pour lies in between, and has some affinity with the staining of Morris Louis. Halving the standard industrial size encourages a squarer format - which Charles tweaks in Dressing Down by stacking two squares. And the combination of several small works – which echo a large panel by covering the same total wall area – makes explicit the general tendency of Charles’ practice to set up and then deconstruct the modernist grid.

All seems good, then: there’s no shortage of visual allure; our expectations are elegant and enjoyably reversed; and viewers can see themselves reflected to some extent, so pulling them into the work and the visible performative traces of its making. Maybe that's enough, but it’s also possible to bring a wider social commentary into play.

Charles, born in Cyprus, was the son of a soldier. His first memory is of the change in light and atmosphere when his family moved from their subsequent Maltese posting to Middlesbrough. Despite a hankering for Art College, Charles was apprenticed into the steelworks at South Bank as a welder, plater and boilermaker, staying for sixteen years. Now, as if yearning for the Mediterranean as well as the visual culture he has found as artist, teacher and gallerist, Charles brings dancing light to dull metal and an industrial process to artistic practice.  He was originally inspired by the marks accruing on table-tops on which metalwork was carried out, and terms for grinding metal – dressing and fettling – appear in his titles. Those words also have everyday, non-industrial usages which enable Charles to inject humour while emphasising the links between the two worlds. Those connections are rarely made so integrally to the art and life as in Unpainting. The British steel industry is, of course, in long term decline, and perhaps there is a mournful aspect to that intersection: the pre-scraped originals evoke signage, hence meaning and function – just what’s been scraped away from so many traditional industries.  More optimistically, service and creative businesses might fill that void, so one might take Charles’ bridging of the divide as an illustrative enactment of what needs to happen. Either way, what emerges is generated out of a notably rounded engagement with society. 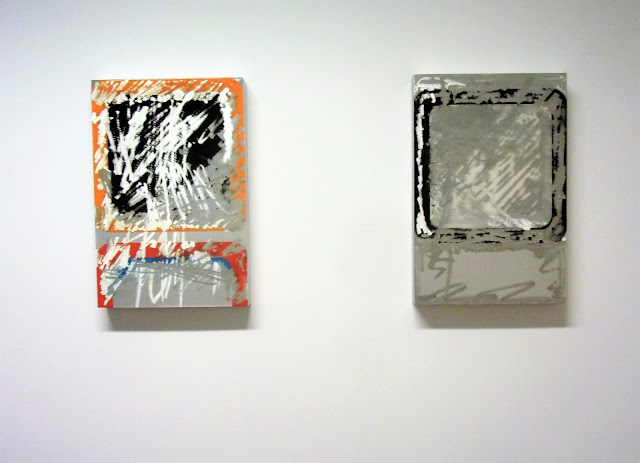 An ideal experience of modern art might go as follows: you’re drawn in by a distinctive aesthetic, but baffled – just what are you looking at? Having worked that out, you’re entertained a fair while by its paradoxes, before realising that there may be deeper messages to ponder... That turns out to be a rather exact description of Unpainting, 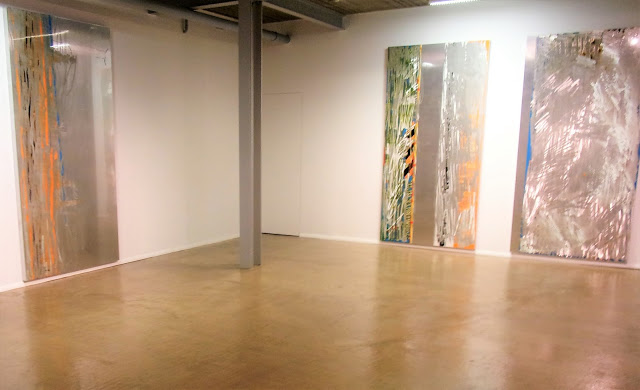 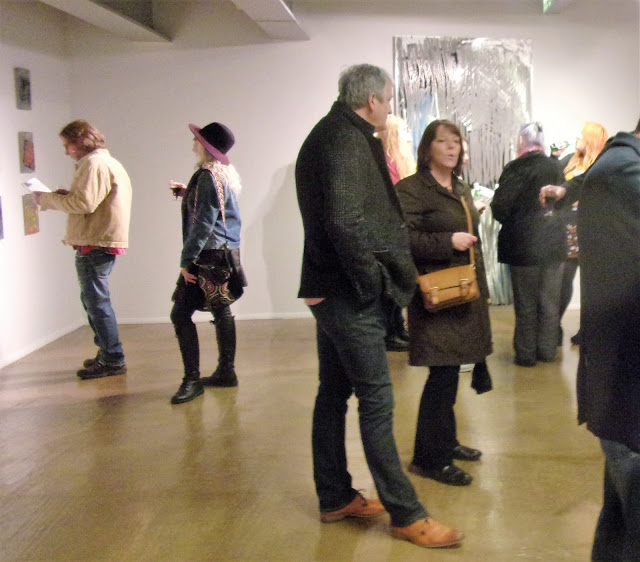 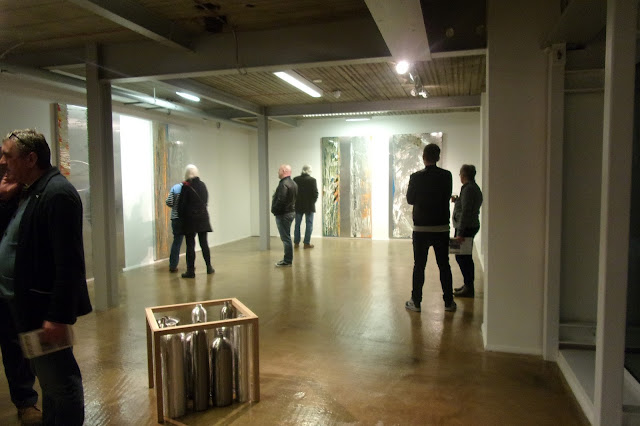 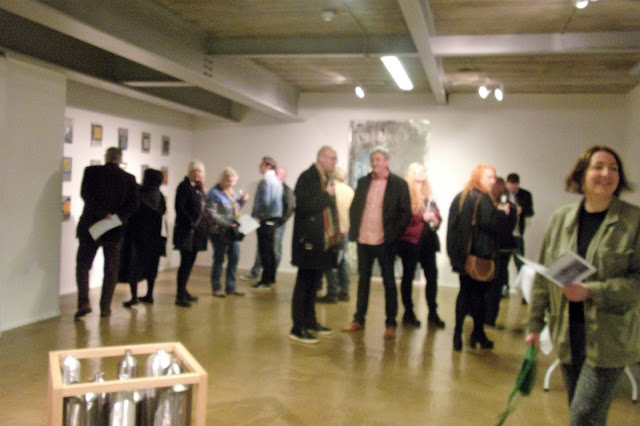 From the opening on 10 March


[i] In that they join a distinguished post-modern canon of ‘paintings without paint’: the many current practitioners include Roger Hiorns, DJ Simpson, Sergei Jensen, Daniel Lergon, Gedi Sibony, Mark Bradford, Auturo Herrera, Richard Tuttle, Rudolf Stingel, El Anatsui and Beat Zoderer. Going back a little, Charles’ removal as a means of painterly mark-making also compares with how the affichistes (Haines, Villeglé , Dufrêne, Rotella) exploited the partial ripping off of layered posters in the 1960’s.

[ii] Morandi is a touchstone for Charles, who might be seen as reversing the Italian’s approach. Morandi applied paint to the vases, jars and bottles, the better to foreground the variations in tone which he wanted to achieve: so he painted both the object and the ground, which were separate in his work. Charles removes paint from his unified object and ground and ends up with something which can, nonetheless, be classified as a ‘still life painting’, just like Morandi’s.