The  most impressive Photo London yet runs 18-21 May. Art Fairs are not by their general nature intimate experiences, but photography as a medium is certainly capable of intimacy. So it was interesting to hunt down the latter within the former... 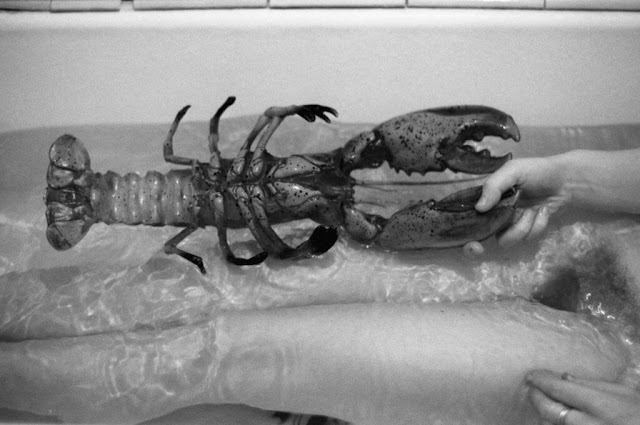 Where could be more intimate than the bath? Little-known Sue Barnes explored self-identity and domesticity in her South London flat in the 1970's, including a series in which where she photographed herself naked in a bath with a variety of plastic creatures.And there's something nicely Daliesque about shaking claws with a lobster, even if it isn't real. Moreover, England's selection of little-seen seventies images was among the best presences.

This very large close-up of a woman's legs sprawled out on a bed is taken from the film ‘In the Mood for Love’ by Hong Kong director Wong Kar-Wai. Düsseldorf-based Martina Sauter isolates grainy film stills and adds subtle collages by attaching papers to the back which are visible - as in the white discs on the dress - through small surgical cuts which, once seen, draw you in close to work out how, from  the back, the 'negative', if you will, must be quite striking. 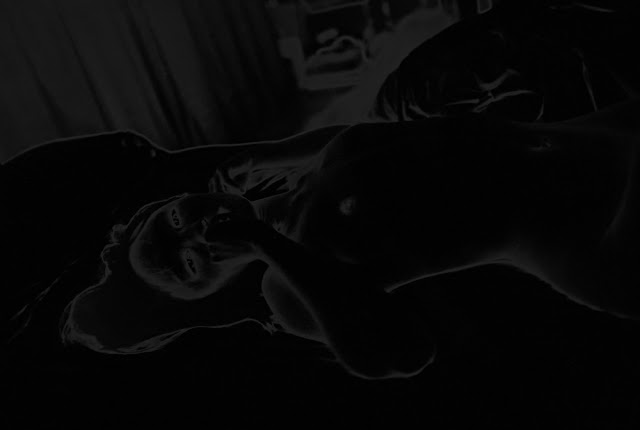 Sakiko Nomura - for many years Nobuyoshi Araki's assistant - showed another means of luring you in. For the beautifully printed series Another Black Darkness, she solarised images darkly enough to require intimate engagement to work out what was revealed of her friends and personal landscapes - in this case, a tender nude quite different in register to the various Araki images around the fair. 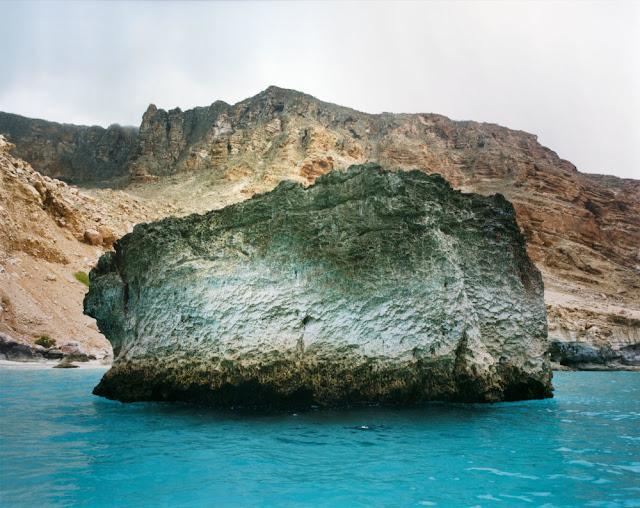 Can a rock be intimate? Oddly, yes, if its colours are micro-heightened by the embroidered stitches which almost disappeared into its already greenish surface... but all the primaries were hand-sewn in there on close inspection of this monumental one-off print by a Dutch artist who recently showed her surrealy peopled landscapes in London to impressive effect. 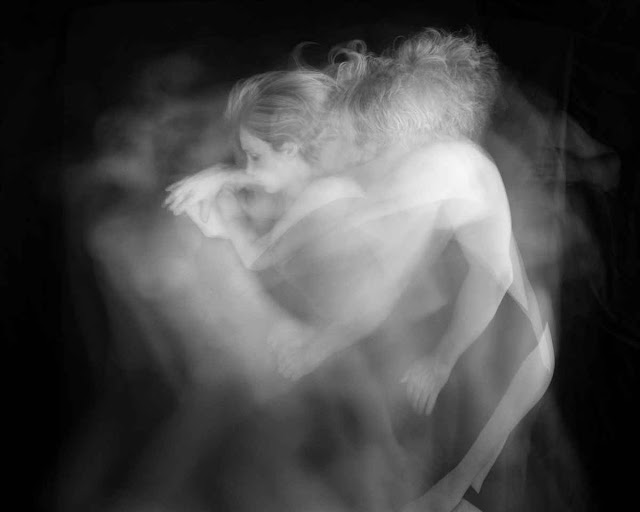 Austrian Paul Schneggenburger has a bed in his studio, where he has made 80 photographs to date of lovers overnight, capturing the dance of their sleep with a single six hour exposure lit only by candlelight. These had me wondering whether the question 'back to back or not?' tell us anything about sub-conscious feelings... 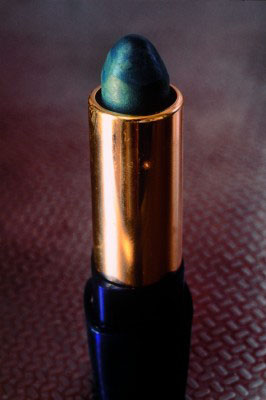 Ishiuchi Miyako (born 1947) represented Japan at the 2005 Venice Biennale, and is known for addressing post-war trauma and the  influence of the US servicemen living on the naval bases during the subsequent military occupation. This is one of two photographs of lipstick from s series of memorial recording of her mother's possessions. 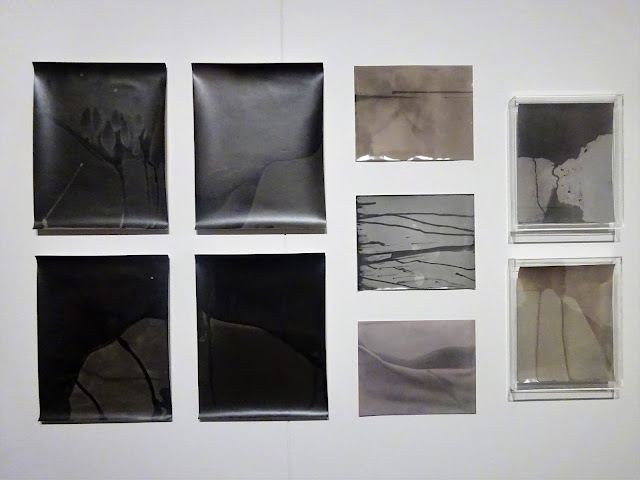 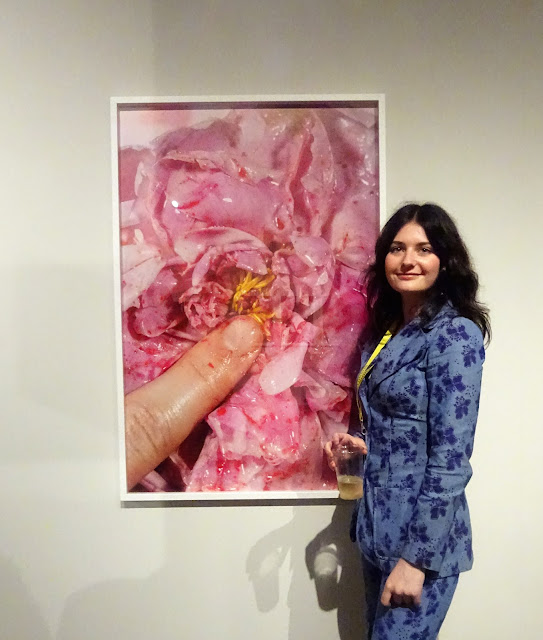 Maisie Cousins told me that the fresh and zingy up-close hedonism of her performative body-plant mash-ups emerges naturally from the 'macro working' suited to her lack of  studio, meaning that she is mostly producing in her kitchen. Her own finger and a friend's bum ('belfies' being technically tricky) were prominent in the selection here, culled from her current solo debut in Fitzrovia. 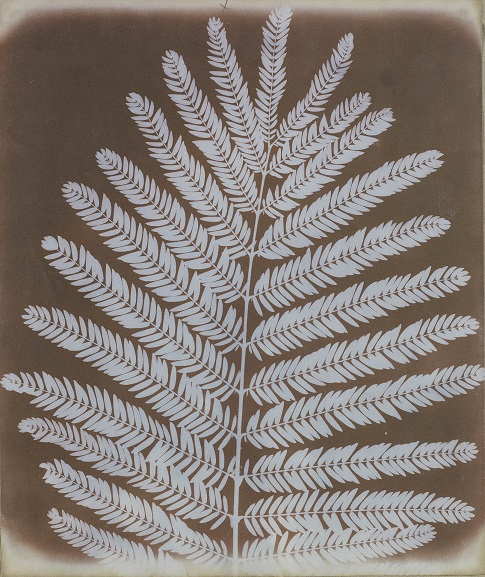 The most impressive of the special projects at Photo London is a large scale virtual reality installation which incorporates some special effects but, more persuasively,  uses the medium more for time travel to an analogue past than for fantastical exploration of present dimensions. Visitors get a close six minute encounter with Fox Talbot’s 1839 exhibition of photographs in the now-demolished Gothic splendour of King Edward’s School in Birmingham - one of which also stands in here for the substantial range of vintage photographs at the fair. 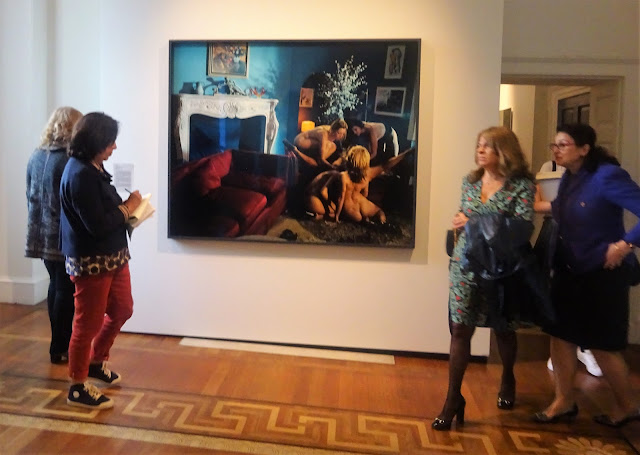 Larry Sultan's famous series (also heading this article) sets the fake intimacy of pornography in the incidental intimacy of  seeing inside the homes of typical professionals' homes in the San Fernando Valley. Their use as locations give the films their particular look, and is the aspect foregrounded by Sultan's on set shots. I couldn't resist snapping four women attending to four women attending to something we can't quite see...

There was plenty of other photographic activity timed to coincide with Photo London. Here my choices all seem to feature wood or woods...

The Beaconsfield Gallery is hosting the results of the leading Dutch photography institution Foam's annual international contest for photographers under 35. There were 1494 entries for from 75 countries, but I don’t think I’m coming over all Brexit in finding that the three submissions from photographers under 35, were shown. I don't think it was just me, but the three standouts were all British: the admittedly already widely-shown Juno Calypso and  Felicity Hammond;  and Leo Maguire, whose room Rosa fused Richard Mosse’s pinkening use of military imaging technology for other means with  Kohei Yoshiyuki’s famous  infra-red photographs of night voyeurs in Tokyo’s parks to capture – with provocatively attractive ambiguity - what seems the rather British practice of  dogging. 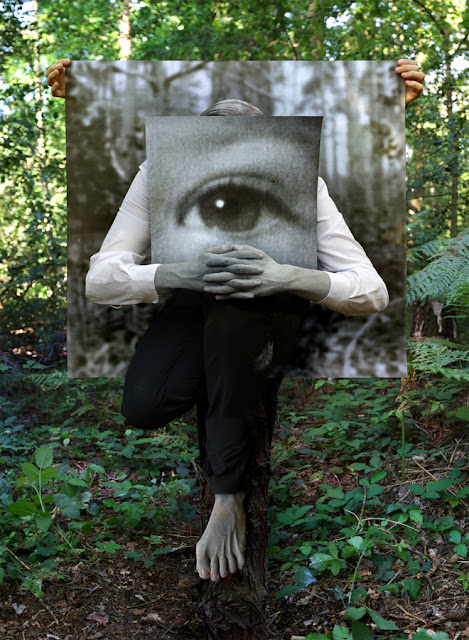 Jonny Briggs:  Untitled (self painted grey, cradling photograph of eye as a child, obscuring my own eyes, in front of backdrop held by partner), 2017

The highlights of Peckham / 24 / 2017, a 24-hour festival over 11 venues were in Copeland Park. Tom Lovelace curated  At home she’s a tourist, a most impressively built multi-room environment (for a one day show!) re-visioned the domestic as a source of division with Eva Stenram, Jonny Briggs and two Danes new to me - Julie Boserup and Mette Bersang - capturing the mood to particular effect.

Both the atmosphere and the use of pop lyrics as a source for show titles continued in Jo Dennis's solo With your feet in the air and your head on the ground, in which original and photographed architectural detritus, sculpturally installed, amounted to found paintings to which she then added. Simon's above is the underside of an old studio floor.

The other end of the scale,  you have until 11 June to see Wolfgang Tillmans at Tate Modern, in which he makes the most of a substantial career through a brilliantly orchestrated installation.