My summary of Basel 2018: the usual excellence at the main fair and museum shows - especially Bruce Nauman (Schaulager and Kunstmuseum), Sam Gilliam (Kunstmuseum) and Raphaela Vogel (Kunsthalle). The Art Parcours presentations and performances around the town were also excellent, notably Keren Cyter's play 'There's no us in masterpiece' and optimally located sculptures by Jessica Stockholder, Pierre Huyghe and Georg Herold.  The satellites had a poorer year. The Solo Project did not make it to a tenth year, Liste and Volta were rather variable in quality, Scope bad  and newer developments small. That left the 35 gallery-Photo Basel as the most consistent fair outside of Art Basel itself. Overall there was serious work on big issues of our times (eg Theaster Gates and Doreen Garner on race, Richard Mosse and Robert Longo on immigration, Candice Breitz and Puck Verkade on sexual power relations) but such work was very much in the minority. Here are a dozen works which appealed to me from the 290 galleries at the main fair. 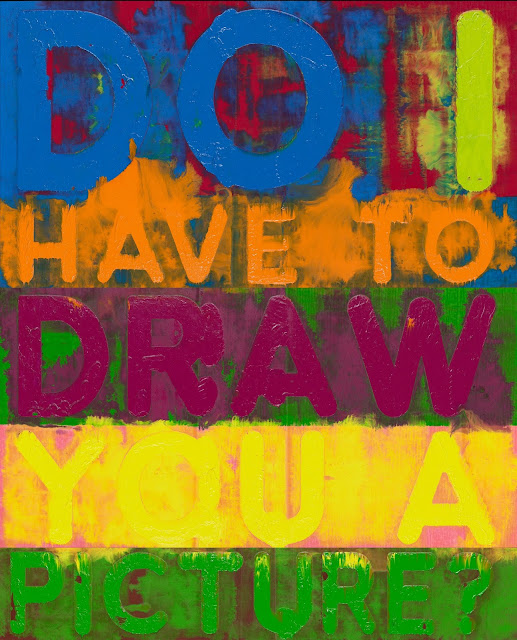 Mel Bochner: Do I Have To Draw You A Picture?
2017 - Simon Lee Gallery, London / Hong Kong

There's a teasing self-reference here, as Mel Bochner is known for his depiction of words - which have become ever-more expressively painterly - so we're hardly likely to expect a picture. Lists from a thesaurus or simply 'blah blah blah' are his commonest choices, though, rather than a sentence like this. And it set me thinking: how much work is there at Art Basel which doesn't draw - or even paint - a picture, saleable as that may be? Plenty, of course: I reckon sculpture, abstract painting, photography and film, the most obvious non-conforming categories, make up all least half the work available, which probably mean choosing from 3,000 works... 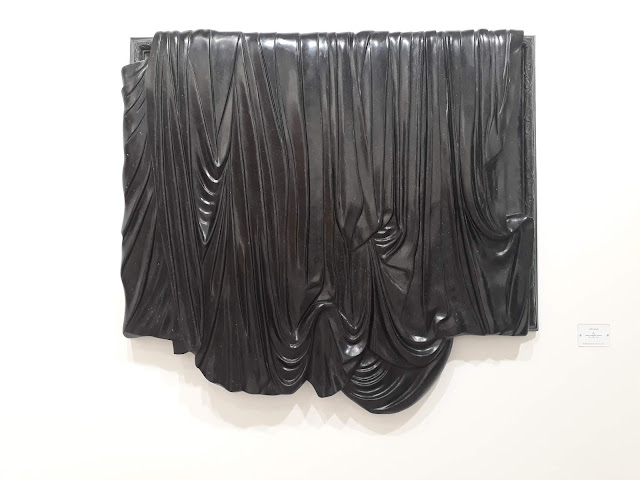 The conceptually slippery French multi-media artist Loris Gréaud pretends to present what would presumably have been the heaviest painting in the fair: though a modest 1.3 metres across, it is made of basalt - requiring the booth's wall to be reinforced. Any secrets of the image remain safe, though, behind the curtain carved by Vietnamese craftsmen: perhaps they would relate to Gréaud's 2016 film 'Sculpt', which also had its secretive aspect, being screened in a full-size cinema with only one viewer allowed at a time... 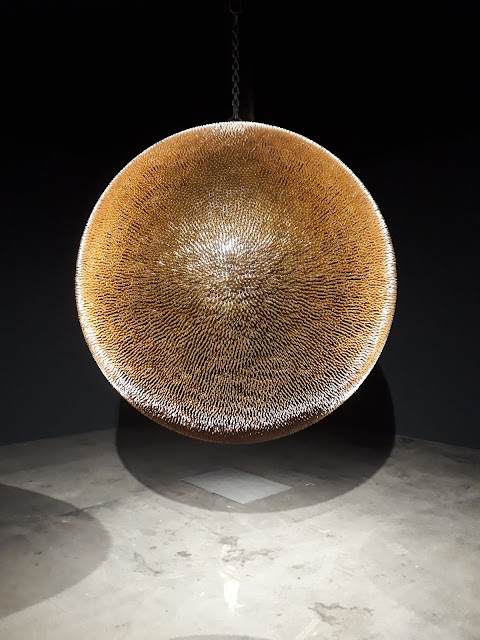 Robert Longo, as much as any current artist, is famous for drawing pictures - such as the monumental charcoals of refugees on view at the Metro Pictures booth. Art Unlimited, though, included this suspended globe studded with 40,000 copper and bronze full metal jacket bullets, a chilling reference to the annual extent of gun-related deaths in the USA - about two thirds are suicide or accident and the rest homicide. 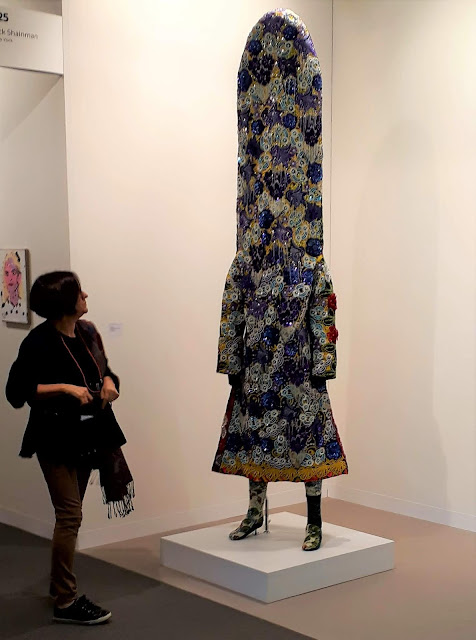 The latest of Nick Cave's 'Sound Suits' - in mixed media including vintage textile, sequined appliqués, metal and a mannequin - has a soaring presence at over 2.5 metres', largely on account of a head suggesting very high intelligence. The series (so called because the first of them incorporated materials, such as twigs, which would make noises if a putative occupant moved) has been ongoing since 1992. Cave developed the suits as a pointed means of disguising identity, class and race in the wake of the Rodney King beating. 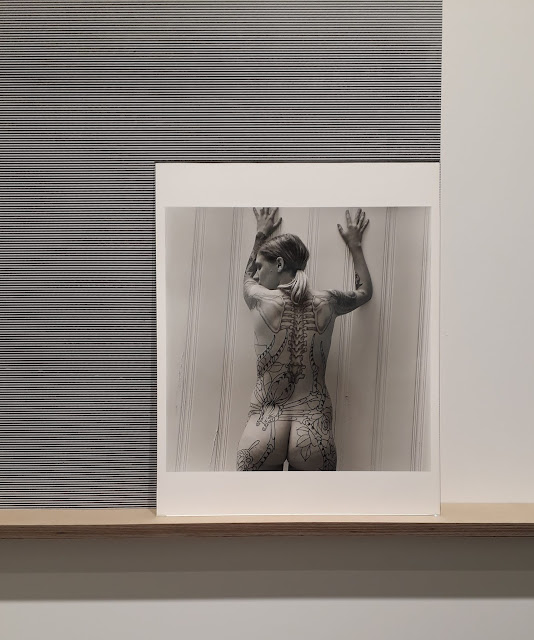 This unusual conjunction came about when Quaytman and Davey were showing along with Vivian Suter in Mexico City and decided that these two works looked better together: a painting on board which was otherwise very much at the simplest and most abstract end of RH Quaytman's practice, which often incorporate hard-to-focus-on stripes along with other elements; and Moyra Davey's exploration of the intimate problems of photographing family members, in this case her niece, whose skeleton-arachnid tattoo fits in perfectly. 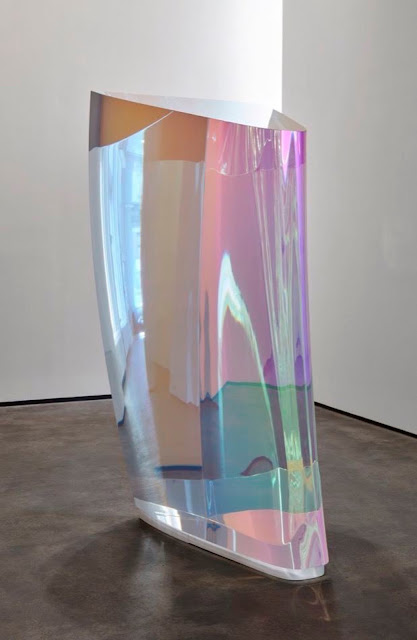 
The Japanese artist Mariko Mori, in Sean Kelly's words,  explores 'questions at the intersection of life, death, reality, and technology'. This  opalescent, audience-coloured chunk   of dichroic coated layered acrylic is certainly a technological feat of production, but also has a transcendental presence. The title references not blood but the jelly-like phase of matter which is the commonest in the universe, albeit the one fundamental state which - unlike solids, liquids and gases - doesn’t exist on earth in its pure form. 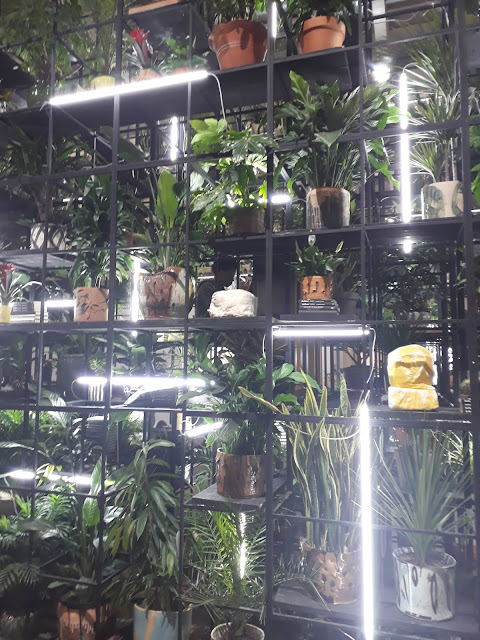 Can you see him? This is a detail of Antoine Baldwin playing very stylish piano from inside of Rashid Johnson's immense grid-come-ecosystem of black steel and wood with neon lights, plants, shea butter sculptures, books and videos incorporated. I could have bought it for around $1m, but the knock-on problems of finding a good gardener and pianist put me off... 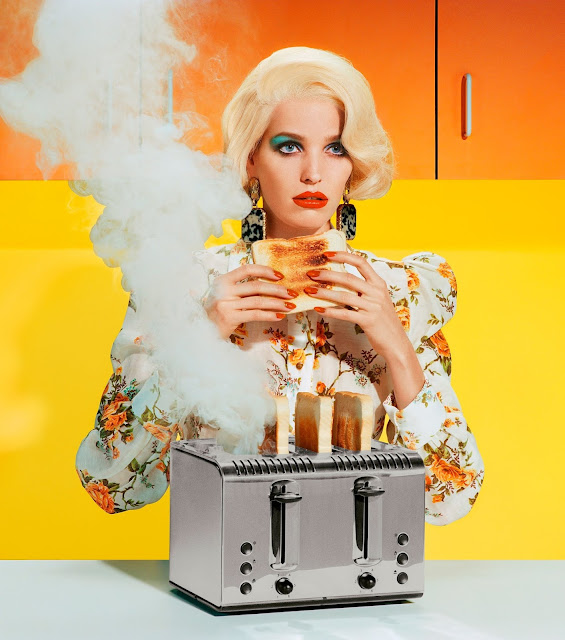 Five typically  fizzing  images by Miles Aldridge, developed with his Spanish gallery, feature 50's-styled women seemingly immune to somewhat odd situations. They're time-consumingly printed non-photographically using an intense dot screen in CMYK with one area in a flat colour (to emphasise the process, says Aldridge), and an appliance printed separately in silver ink. This particular image resonated a little extra with me as burning toast had set off the fire alarm in my hotel a few hours before I saw it... 
Alicja Kwade is known for distorting everyday objects in order to question the metaphysical reality behind our conventional systems. So money, and the value it achieves, are an obvious fit for her investigations. Her assisted readymade simply adds cogs to a row of eight coins to suggest financial mechanisms at work. When you consider that around €3 so treated was on sale for €7,000, it becomes a working financial mechanism in itself. 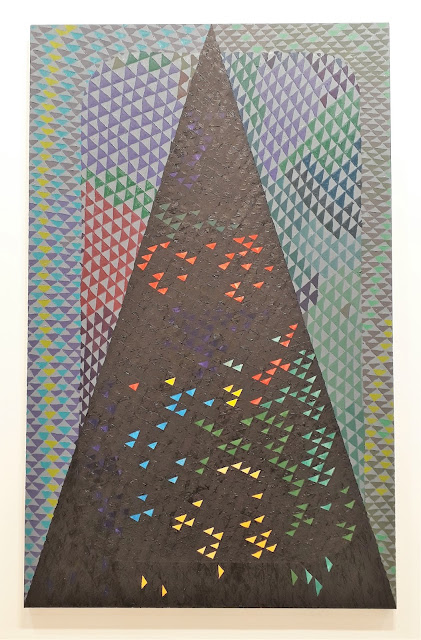 
Despite a career-long interest in the play of pattern, Chris Ofili has built his reputation as a figurative painter. So this powerful oil and charcoal abstract surprised me – though it emerges quite logically from his New York show last year. There, paintings almost merged into a cage-like construction of grids as Ofili asked what is sweeter, 'the song of the uncaged bird, or the song of the caged bird?' That geometry, plus textiles from Trinidad, Ofili’s long-time residence, are evident here, along with what may indeed be a new freedom. 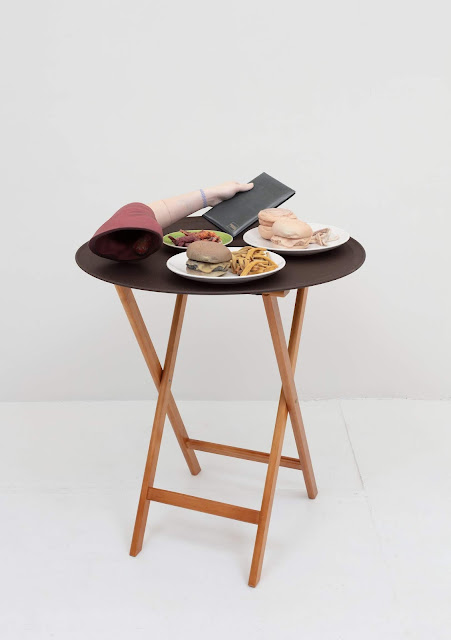 It was hard not to notice three tables on which Josh Kline had 3D-printed food together with body parts of a waitress - the flesh bearing corporate brands, some of the food naturally coloured  and some taking its hue from the waitress's skin. Mark that down as a protest at how jobs define people, and at how low wage jobs critically depends on tips to bring them up to a subsistence level. I’m not sure what bill is being presented here, but the sculptures (in editions of 3) were $50,000 each. 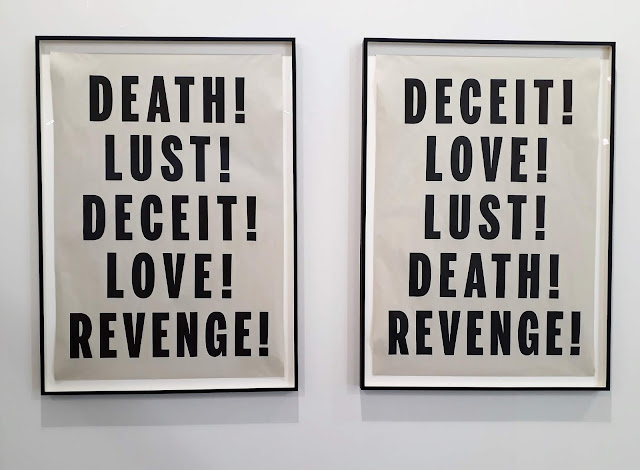 To return to text as the most obvious way of not drawing a picture, Janice Kerbel's series in letterpress print is pure and impactful: she summarises the imagined plot of an archetypal novel using just five exclamatory words. Those narrative headlines can come in any order, though, so the 2015 Turner Prize nominee has made 120 one-off works - that's 5 x 4 x 3 x 2 x 1 possible combinations for the mathematically inclined. Iceland's i8 gallery were showing three of them.
Posted by Paul Carey-Kent at 21:15