HEAT IN THE COOL: MASTERPIECE 2018

London was sweltering in its hottest-ever June as the 'cross-collecting' fair Masterpiece opened  with 160 international exhibitors.  Similar temperatures at Frieze New York in May overwhelmed the air conditioning, leading to ongoing compensation claims from gallerists who felt they suffered from the early departure of potential high spenders. The Royal Hospital Chelsea remained comfortably cool, but I found myself drawn towards several works suggestive of the temperature outside... 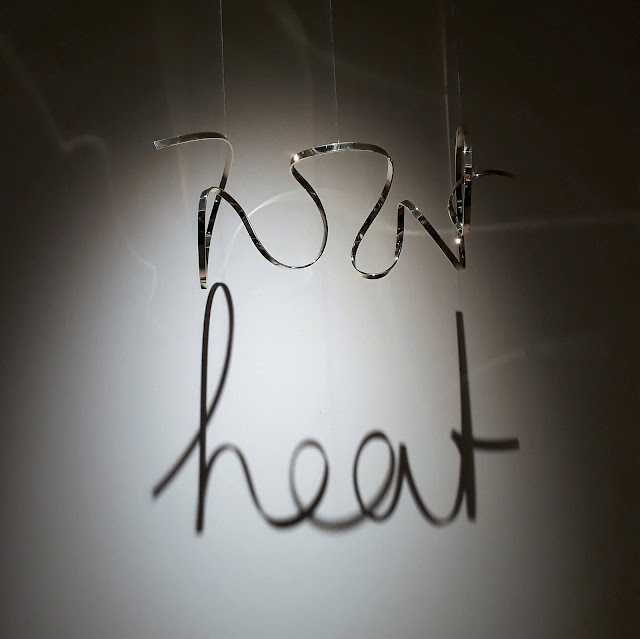 The Belgian Fred Eerdekens studied sculpture and graphics, which are indeed balanced in how he provided the most direct heat at Masterpiece. Nice how the word is slightly hazed. The form defines the words just as the words must have defined the forms in a game of shadows with Platonic undertones. Letters are, after all, an abstraction of sorts. 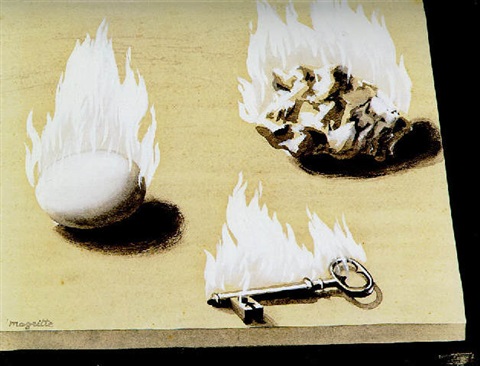 In this image of its gradation, the typically Magritte paradoxes are that fire engulfs paper, egg and keys equally – but not the wooden table on which they sit – and that the objects remain unaffected. What fuels the fire? A remark from 1946 suggests that Magritte may have had a different kind of heat in mind: ‘The astonishing discovery of fire, because of two bodies rubbing together, suggests the physical mechanism of sexual pleasure’. 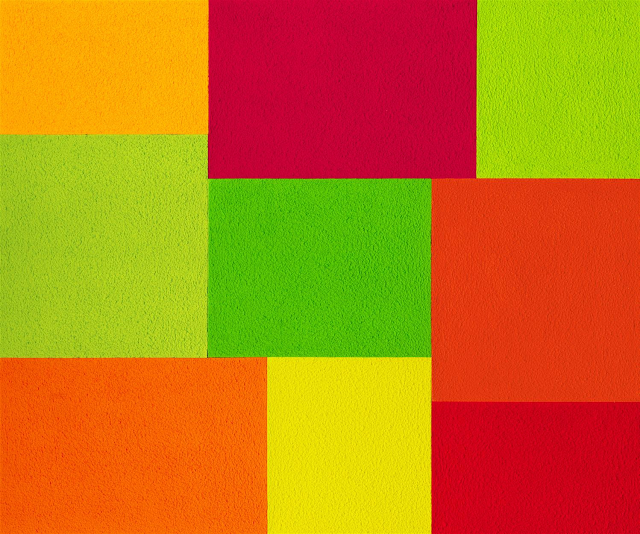 Peter Halley is well known for using Roll-a-Tex, a textured paint normally employed for decoration, and florescent Day-Glo paints. Those are usually partial elements in compositions suggesting ‘cells’ or ‘prisons’ which stand in for the operation of social networks and constraints. This is different, being one of the all-Roll-a-Tex, all-Day-Glo, purer grids which Halley introduced in 2015. Whether or not it avoids any symbolic meaning, it blazes out hot and discomforting. 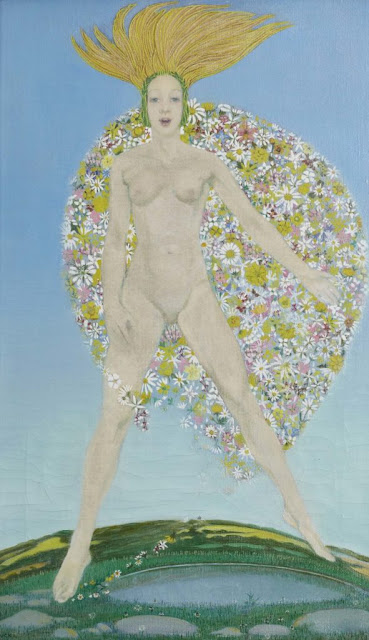 This may be the only nude by Hannah Gluckstein (1875-1978) – who cropped her hair short and simplified her name – whereas flowers, along with portraits and landscapes, were primary territory for her. Moreover the painting was once owned by Constance Spry, a society florist with whom Gluck had an affair. Apparently they jokingly called it ‘Interflora’. The fair was a little late to celebrate the ancient festival of Floralia (April 28 - May 3), but this is a lively account of the goddess of flowers and spring – complete with sunny head-flare – by an artist who has come back into favour in recent years. 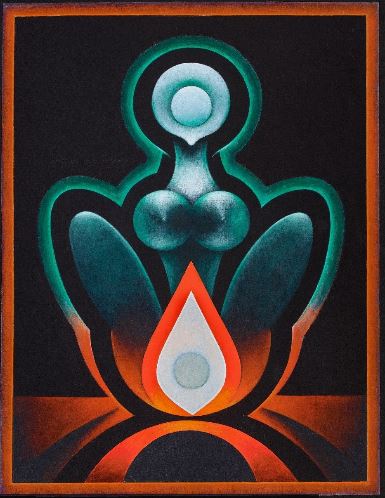 While we’re on names, the Kasmiri painter Gulam Rasool Dar (1929-97) took that of his wife, Santosh. His work took a spiritual turn in the 1950’s, seeking to articulate the interplay of Shiv and Shakti, as entwined in the cosmic harmony of tantric philosophy. Accordingly, the refulgent flame in this work ascends past a figure created from the tantric iconography of circles and ovoids to fill the night , permeating space with the impulse towards life. 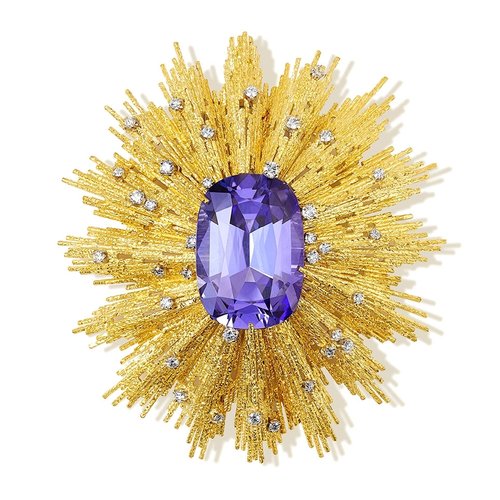 Masterpiece has an eclectic range of content – cars, clocks, and curiosities for example – though as it has gown bigger the proportion of fine art has increased. Andrew Grima, a major post-war jewellery designer, died in 2007, but his widow Jojo and daughter Francesca continue the tradition. This striking brooch sets a tanzanite in a sunburst of textured wire. That wire effect, requiring strand-by-strand hands-on skills which only a few goldsmiths possess, is the signature technique of the family firm. Do you love someone to the extent of £75,000? 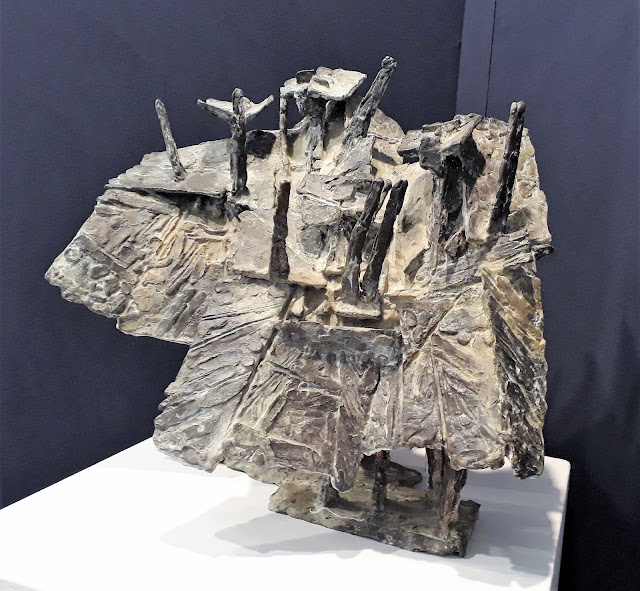 This reminded me of late 1950’s British sculpture, and most specifically the work Kenneth Armitage’s People in the Wind, 1950.  Here the weather effect is different as men raise their arms and spread out to take in the sun. In fact, it shows parallel approaches in Belgium by Olivier Strebelle (1927 – 2017), who has monumental bronzes in many countries but not the UK. Sad to say, there was no natural light streaming into Pangolin’s booth… 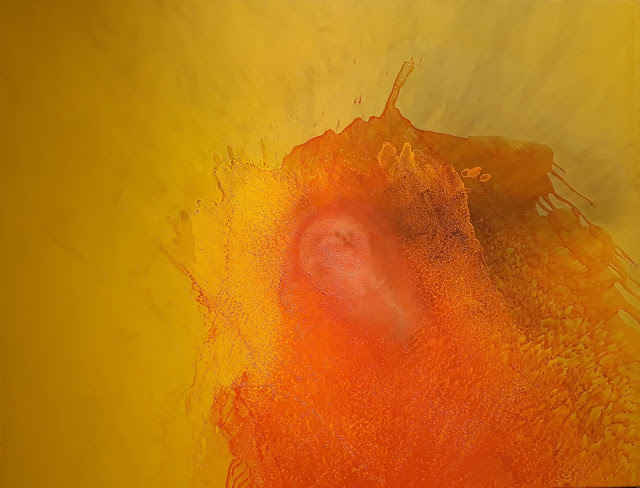 Fire paintings are central to the oeuvre of Otto Piene (1928-2014), who co-founded of the Group ZERO together with Heinz Mack in 1957. Piene employs fire as an elemental means of painting with light and energy. He lights a thin layer of solvent on the canvas, allowing the image to emerge from flame and soot, then develops it further as necessary with paint. This is an unusually light-toned example: the burned element, and the weave of smoke, are restrained and the result resembles an exploding sunspot. 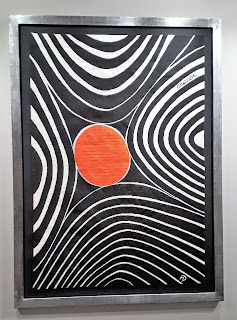 This Calder looked good framed in the manner of a painting, but the fair also had impressive tapestries more simply hung, notably at Boccara. Calder (along with Haring, Boetti, Matisse and Fontana) was a widespread presence, and this suggestion of ploughed lines around a planet-come-sun, evoking a turning of the agricultural seasons, has plenty of zip. 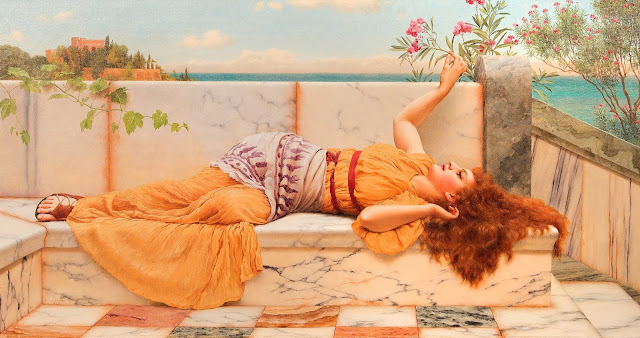 Maybe after all that thinking about heat, it's time for a nap... After which comes 'A Happy Awakening', which seems to be a regular presence at Masterpiece. It's one of Godward's most opulent, if somewhat vacuous, renditions of his signature template of beautiful girls with marble, classical robes, flowers and sea. The formula was highly successful up to World War I, but not  to the extent implied when he committed suicide, leaving a note stating that ‘the world is not big enough for myself and a Picasso’.