Frieze London strikes me as about average this year, with better sculpture than painting. Here are ten works which appealed, all showing the latest work from artists I already knew - which is one pleasure of a fair, the other being to discover new artists you like... 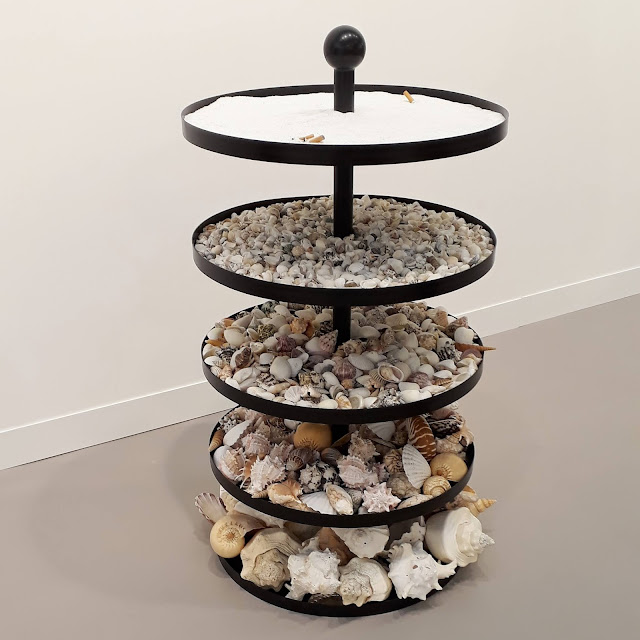 There's a nice logic to Nicole Wermers' 'Untitled ashtray (shells)' (2018): grandness gets smaller as the layers ascend till the crushed shell form of sand is reached, only for the sequence to be summarily stubbed out... unless the implied smoke is the next reduction. 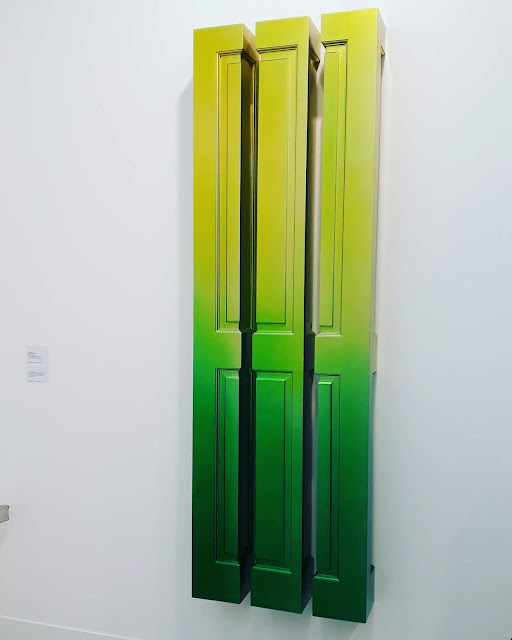 Jim Lambie's 2m high 'Petrichor (Green Finch)' (2018) at Franco Noero looks like three doors, each folded in and round on itself to form a tall box shape, making up a more complex and psychedlic portal, colour-coded for the progression of light over time. Then we come to the title: petrichor: 'a pleasant smell that frequently accompanies rain after a long period of warm, dry weather'. 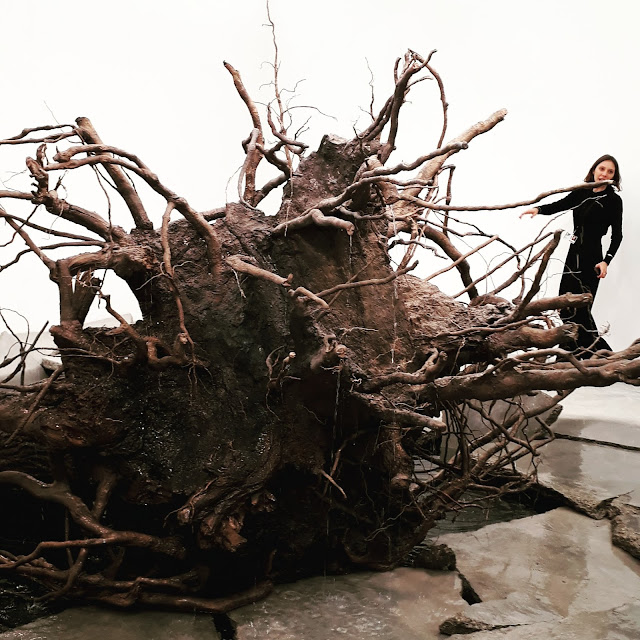 Tatiana Trouvé's 'The Shaman' (2018) at Kamel Mennour is the most spectacular work , turning a massive bronze tree root into a working fountain as a way of proposing the potential for the artist to operate as a shaman of sorts: able travel from one world to another - as trees cross from below to above ground - and to achieve transformation. 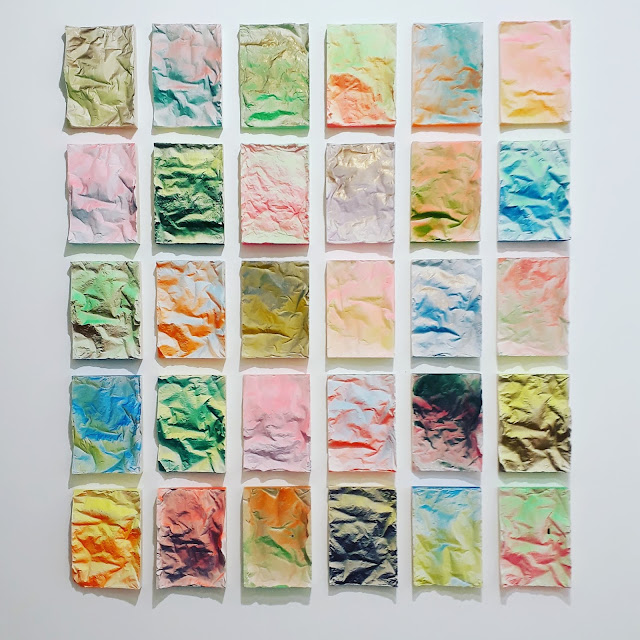 Rana Begum's newest stream of work at Kate MacGarry is so recent it - the 'crumples', perhaps - hasn't yet picked a generic name. These are jesmonite versions of sheets of A4 paper screwed up, flattened to a degree, then spray painted from various angles - so linking them to Begum's well-known 'bars' (see Third Line's stand) in which the colour seen varies with the viewer's position. 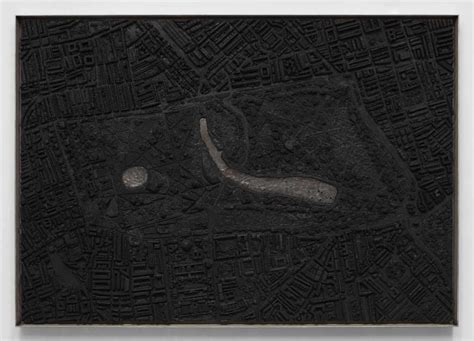 Matthew Day Jackson’s 'August 6, 1945 (Hyde Park)', 2017, at Grimm is doubly dark: it’s part of a series which uses scorched wood and lead to imagine aerial views of the effects of a nuclear explosions in new places on the grounds, says Jackson, that ‘the use of a nuclear weapons doesn’t have a boundary. It brought a moral wound to the entire globe’. Here Hyde Park represents the possibility of it happening again, anywhere. 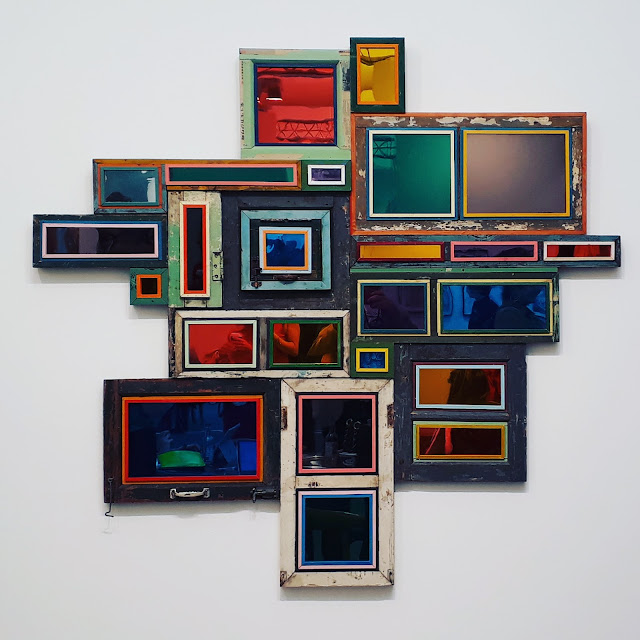 Song Dong's 'Usefulness of Uselessness - Varied Window No. 8' (2018) is at Pace. The title suggests that windows rendered useless by their buildings' demolition have been given a fresh use as art, courtesy of rearrangement and coloured mirror plastic inserts. Though you could argue that things as useful as windows have been turned into something useless - art. 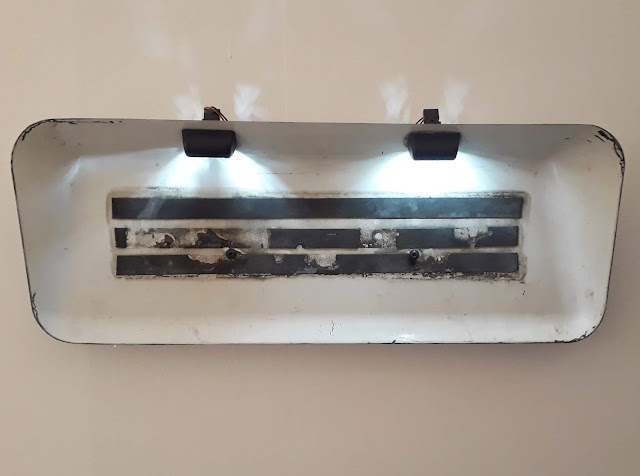 In case you wonder: 'are there any undiscovered objects left for effective appropriation?' go The Sunday Painter. There are  number plate holders scavenged from scrapped cars and vans by Leo Fitzmaurice. They speak of personal history and lost information; are aestheticised by the marks left by fixative tape and screws; and come complete with inbuilt readymade lighting systems. 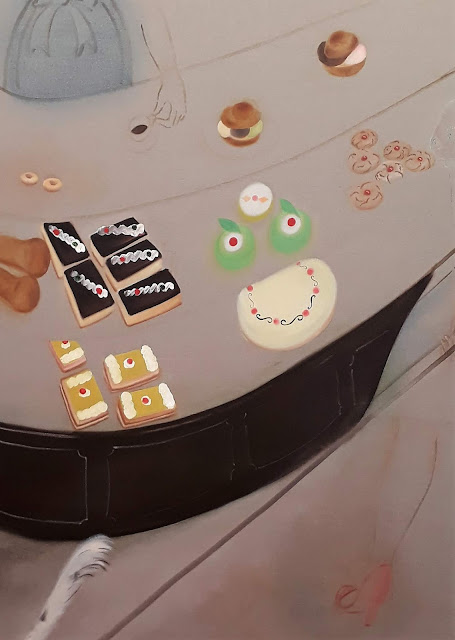 Maria Farrar - born in the Philippines, raised in Japan - brings a calligraphic lightness to her organisation of elements on raw ground. Cakes often feature, though she's small enough to indicate that she prefers the painting to the eating, but the primary pleasure of 'Brioche con Gelato' (2018) at Mother's Tank Station may be how lightly the presence of a dog is invoked through tail and lead. 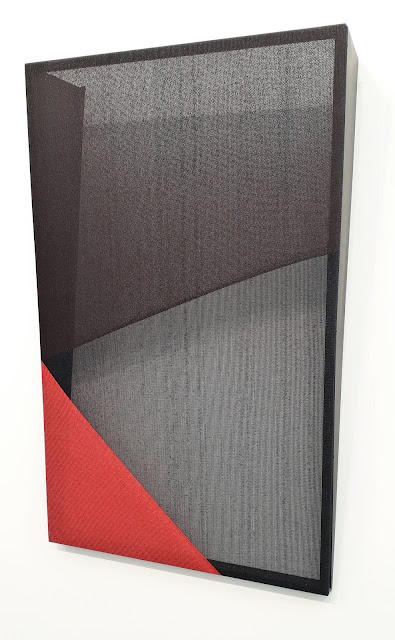 Paris-based Canadian Kapwani Kiwanga’s ‘Shade 4’ (2018) uses ‘shadecloth’, normally found in African fields to protect crops from excessive sun, over a steel framework which gives it a wedge shape on the wall – all the better, perhaps, to drive home the metaphorical possibilities which title and material set in motion: she refers to the colonial appropriation of land and the manipulation of the environment for economic gain. 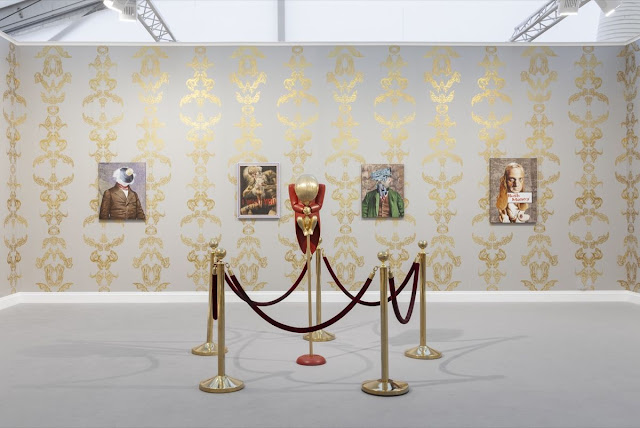 Close examination of the wallpaper at Simon Lee's solo booth of Jim Shaw showed it to consist of distortions of Trump's face, gilded in the manner of his Mar-a-Lago retreat and providing the backdrop for a sculpted foetal Trump and  weirdly satirical paintings. 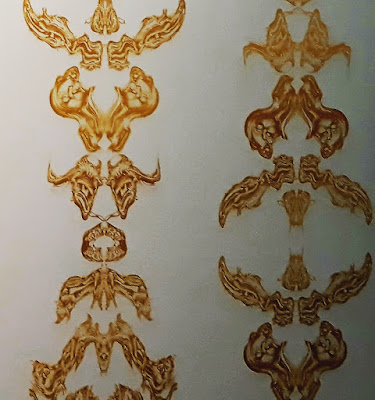 The obvious attention grabbers are Gagosian's Man Ray solo and Dickinson's recreation of Hepworth's garden. Added to which... 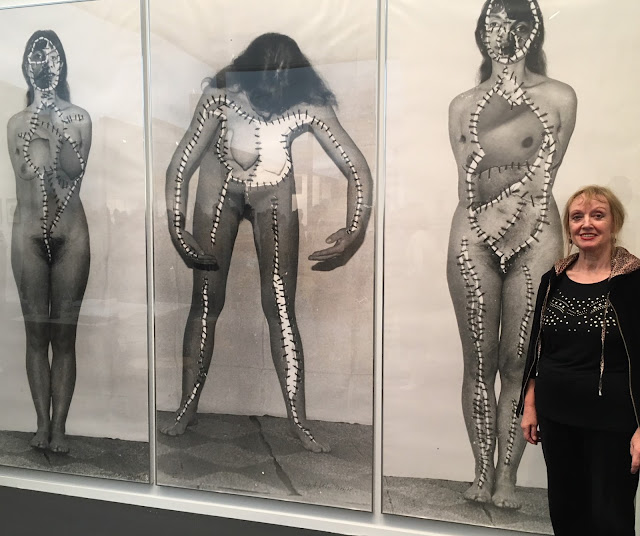 Annegret Soltau at Richard Saltoun's solo booth with her 1977/78 work bodily attack (pregnant), which depicts her before, during and after the birth of her first child, 40 years ago - she sees the threaded montage effect as an attempt to integrated the whole, and the condition of her changing body - her arms at centre indicate how her belly will form. All ended well: she posed for this picture in order to send it to her children. 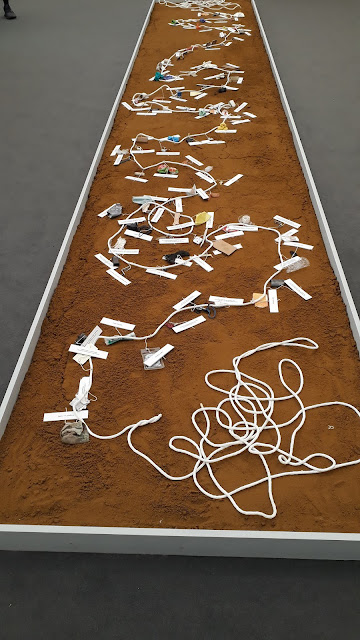 Ilya Kabakov: ‘The Rope of Life’1985/2018 at Gallery Continua spreads street detritus along a lifeline starting from the artist’s birth in 1933 to represent memories as if to suggest that whatever material items have been lost is of little consequence, as the connections can still be made through substitutes. 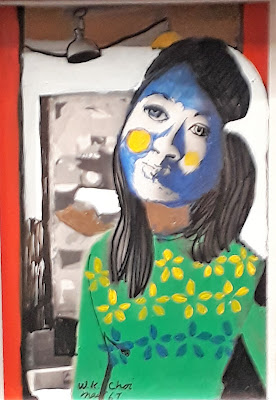 This charmingly overpainted photograph at Tina Kim Gallery (‘Self-Portrait’ 1967) is by Wook-Kyung Choi (1940-1985), who spent most of the 60s and 70s in America between Korean periods, as reflected in paintings of which – although normally abstract – are closer to de Kooning than Dansaehkwa, leading her to fade from the historical narrative. 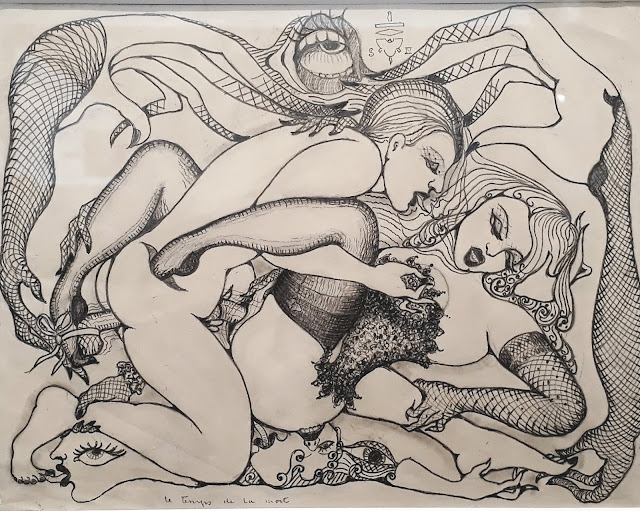 Pierre Molinier is well known for his surrealistic photomontages (generally involving multiple self-portraiture with cross-dressing and photographic disassembling of body parts). His drawings prove to be just as perverse at Galerie Christophe Gaillard - the complex interaction of 'le temps de la morte' 1962 includes the employment of one dildoed and one wound-penetrating foot. 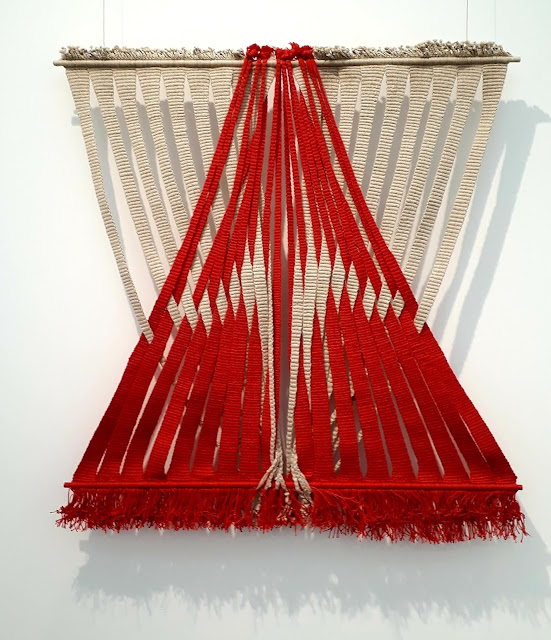 Lenore Tawney (1907-2007) made textiles before they entered art's mainstream. 'Union of Water and Fire' 1974 could be a sex abstract: the red male fire and earth meets the white female air and water. Shown by Alison Jacques. 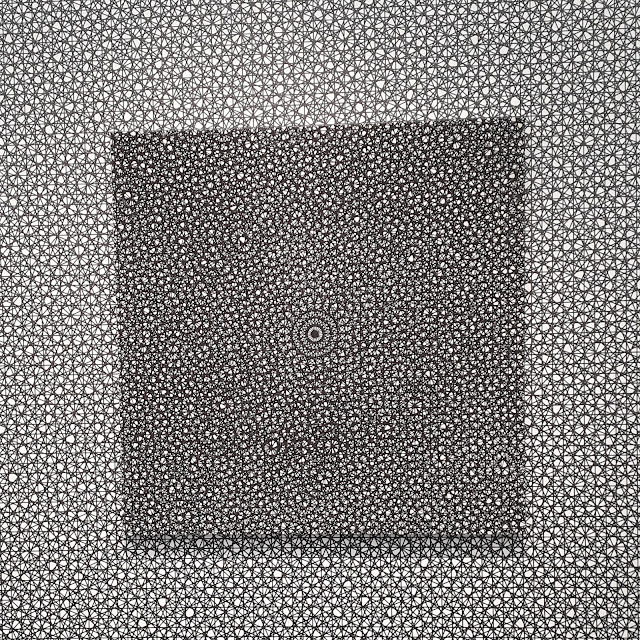 Excess all patterns... Kamel Mennour and Levy Gorvy's joint stand of Francois Morellet is a stand-out complete with 'trames' wallpaper. Maybe that's too much - trames to trauma - but it's interesting to see the envelope pushed. 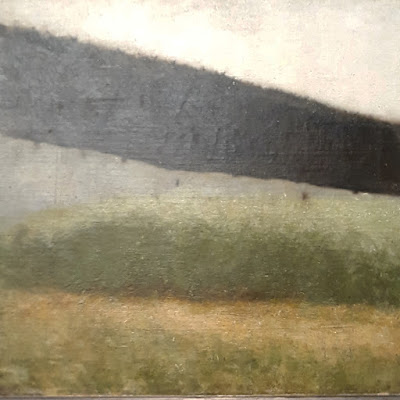 Le Claire Kunst has Vilhelm Hammershøi's 'Barn near Vejle' 1896 at  - a typical early small and gently luminous view of segmented fields and sky. Slight blurring adds to the immutable atmosphere which anticipates his better known period.

Joan Snyder at Franklin Parrasch Gallery integrates personal history into predominantly abstract paintings. ‘Love’s Pale Grapes’ 1979 apparently relates to an affair – towards the end of her marriage to photographer Larry Fink - with her therapist. That was always going to be charged territory: among the words scrawled lower left we can read “I love you, is it worth anything?” The plastic grapes bursting through in what could be a sensuously Keatsian* manner are incidentally typical of the plastic products (mostly toys), which her salesman father used to deal in.

* 'whose strenuous tongue / Can burst Joy’s grape' (Ode on Melancholy)