Art Geneva is a pleasant experience: a spacious hall, busy enough but uncrowded, substantial yet digestible size, and right next to the airport at the Palexpo exhibition centre. It's tagged 'Salon d'Art', and does have a relaxed and intimate feel compared with the bigger fairs. The 120 galleries are a good blend: modern and contemporary, established and upcoming, with many of Geneva's own galleries as well as those from Zurich, and a sprinkling of international heavy hitters such as Gagosian, Hauser & Wirth and Pace. Here are a few recent works which caught my attention: I've chosen from this century, but could equally have opted for the last. 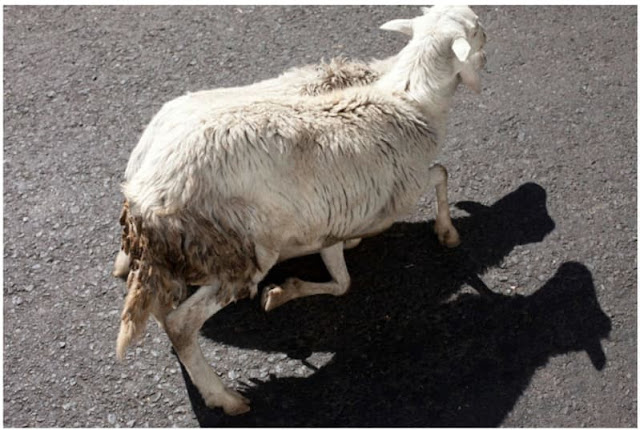 Wolfgang Tillmans is a master of the seemingly casual as curiously interesting, but this operates rather differently as a near-illusion, Why has this sheep got two shadows, I wondered? It took me a while to be sure that this wasn’t a digital tweak, but that there are actually two sheep, perfectly in sync. Talking of which…

An offshoot from McCollum’s long-running system which ‘allows him to make enough unique shapes for every person on the planet to have one of their own’ are anthropomorphised as paired individuals. They don’t fit together like puzzle pieces, nor do they match in size or colour, so it’s either an ironic view of the impossibility of perfection or a strong line on how ‘opposites attract’ – as they can in any healthy community. 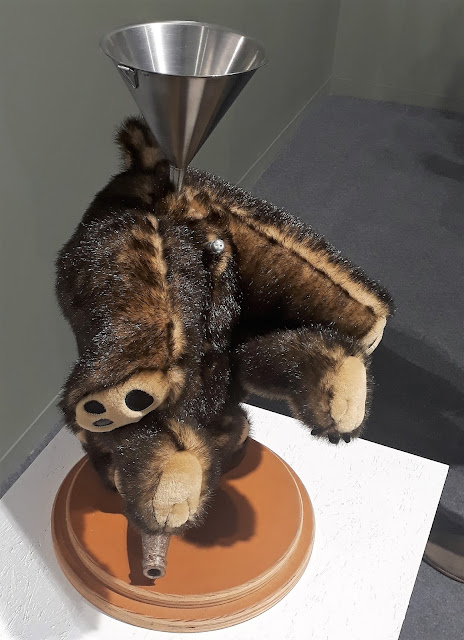 It’s just as tempting, of course, to read the title as ‘Bear Lamp’, even though there is a ceramic bottle of beer at the bottom, which is the mouth, At the top, which is the bottom and where Jackson’s love of liquidly performative paint might led you to anticipate liquid sucked in or spurted out, there is actually a functioning light, turned on by erecting the bear’s wee appendage. 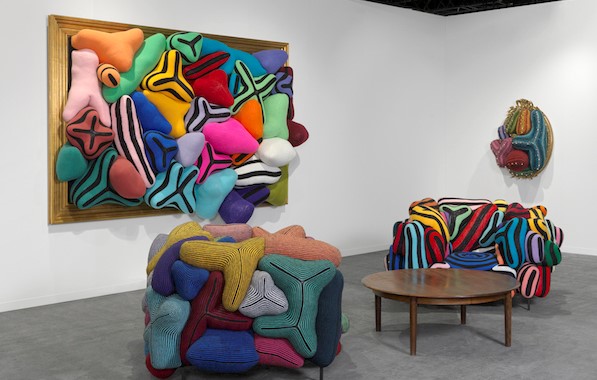 The central feature of Gowen's inspired stand was one of the Portuguese artist's series 'Crochet Paintings', crossing the boundaries of domestic craft, painting and sculpture with exuberant impunity. The title claims that this baroque whole is to be seen as more than the sum of its parts: a feminine usurpation of male traditions comes to mind... maybe the forms have a more darkly parasitical way of being than their jolly colours suggest.

This is an ideal Art Fair piece. Has someone accidentally trodden on what looks as if it might have been a rather beautiful dragonfly? The description: ‘painted wooden pedestal, miscellaneous heaps of glass and crystal jewellery and pendants’ suggests that the fragments were never conjoined: it's just a sprinkle of jewellery, but elevated in its formlessness by the modernist plinth… 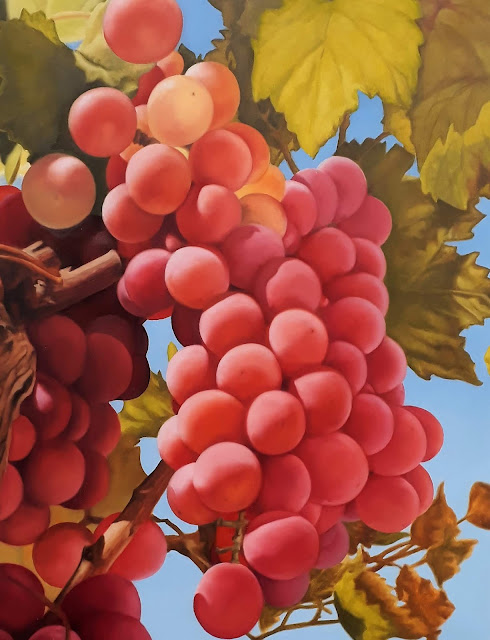 What’s this, a painter showing off his realist technique? It’s more of a tease. The Anglo-Cypriot takes photographs then outsources the painting from them, undermining that aspect and foregrounding what the fruit might stand for. The unattainability of authentic consumer satisfaction? The potential parallels of intoxication between art and wine? A critique of politicians failing to be realistic? Yet the grapes remain seductively tempting, however they’re meant. 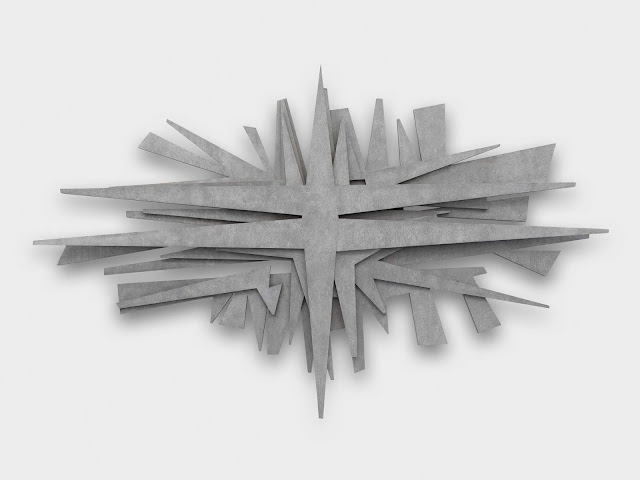 Carron, one of the most highly regarded Swiss artists, known for his out of kilter apparent appropriations of the traditional and the modern. He had a nice curated solo show at the fair, but my favourite single work of his was this riff on East European brutalism, borrowing concrete motifs which he then overlaid to form something like a comic explosion which was neither concrete not the titular metal but wood, painted with acrylic. 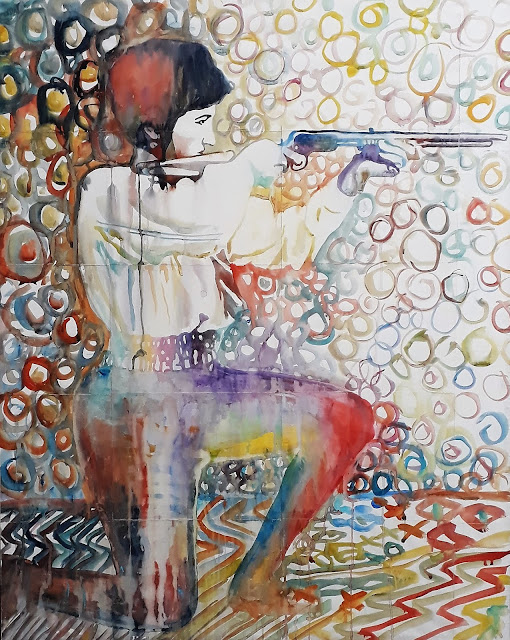 
This 'not me too' moment - of watercolour on assembled papers - is from a series of 'strong women' who have contributed to political, artistic, scientific history, which the multi-media German artist has derived from 19th century photographic sources but updated to suit. Most are simply shown looking resolute, but Elsa is equipped with a modern gun and seems likely to use it.

It was news to me that art duo Los Carpinteros - Marc Antonio Castillo Valdes and Dagberto Rodriguez Sanchez - split up last year. Anyway, I liked the new solo series from the latter, which combines the epitome and antithesis of American imperialism in his new series: exacting reproductions of classic cars from the 1950's, complete with authentic typefaces - but spelling out quotes from Castro's contemporaneous speeches, here 'your country or death'. 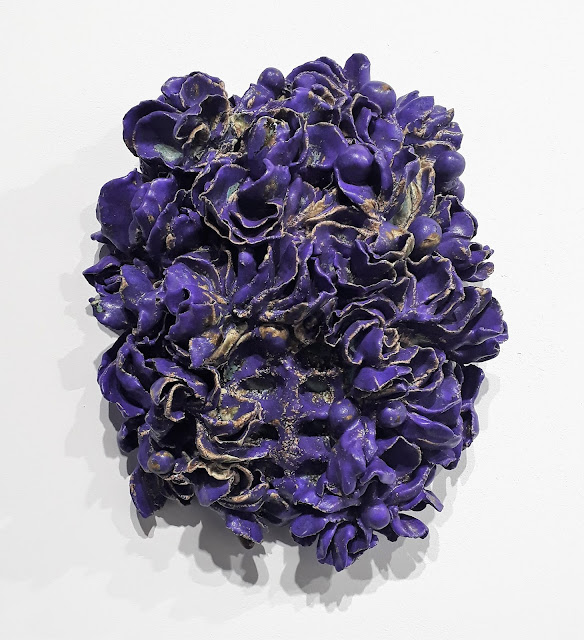 Ceramics are very much of the moment in contemporary art, and Art Geneva has a special section for them - though this alluring mixture of sea anemone, bodily and floral was in the main fair. Perrotin had the blingier gold versions, as is the gallery's wont: Almine Rech had this less ostentatious but ruder glazed stoneware from the Flemish sculptor, with just a little gold lustre . On which salacious theme... 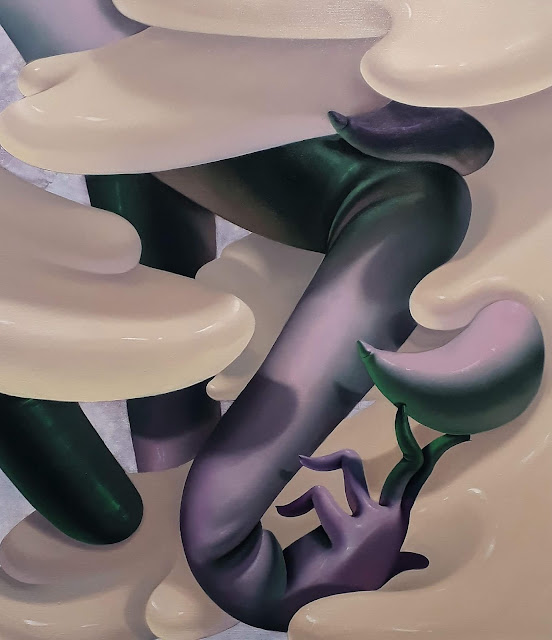 I seem to have chosen well-established artists so far, but New York painter Sarah Slappey (born 1984) was new to me. There's plenty of verve in the sci-fi meets landscape meets organic abstraction meets sexual possibility here. The results are sweetly repulsive. Add the advantage of a catchy name, and I predict she will do well. 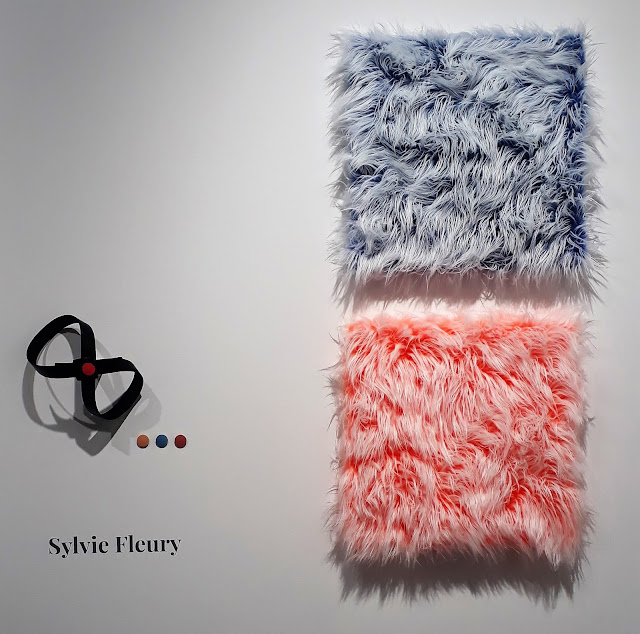 Geneva partners with the art and design fair PAD. One crossover featured Swiss favourite Sylvie Fleury.  J. Hopenstand, an online producer of  customisable small leather goods showed artist-designed belts alongside some contextualising work. Here, then, are a couple of Fleury's synthetic fur paintings with her belt, which features a buckle available in three make-up-inspired colours. 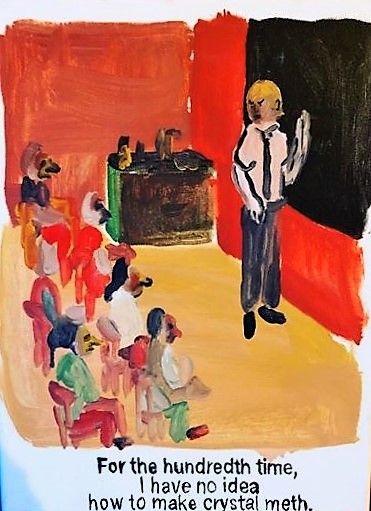 The luckiest gallerist at the fair must have been Nicola von Senger: his artist Beni Bischof built him a complete working bar in a style to take him back to his youth, the walls packed with work - complete with photos of Niki with the many artists he has known. Bischof seems to do everything - from gothic abstraction to sausage collages to hijacked ceramics and record sleeves, all shot through with a madcap humour which comes to the fore in his cartoon paintings: they made this the funniest place as well as the most unusual.