This month’s selection features some shows you might not have found, including several spaces which I have not previously featured,  such is the number of new galleries opening despite all economic trends… there are also, more coincidentally,  three Australian artists… 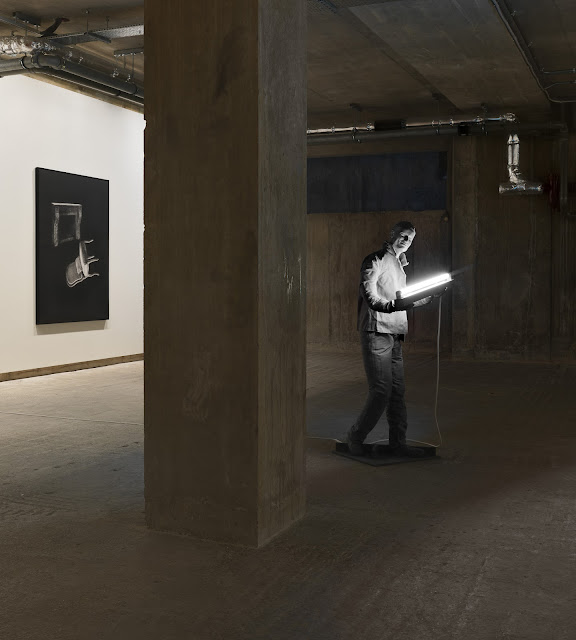 
It’s hard not to feel that Ron Muecks’s recent use of altered scale and Yue Minjun’s focus on a fixed expression are combined to better effect than either in the work of Juan Munoz, as seen in the matte grey 2/3-sized versions of his  brother installed in his 2001 Turbine Hall otherworld. A decade on from Munoz’s untimely death, this show brings us up close to figures made in  preparation for the Tate’s ‘Double Bind’, plus works on paper covering several of the Spanish trickster’s main themes.   ‘My work is about a man in a room, waiting for nothing’, said Munoz, out of which he brings an uncanny presence to the theatre of what cannot be said.

Artist-curator Charles Danby has put together a retrospective of Graham Gussin’s painting, photography, video and installation with plenty of implied and actual sound and movement in tune with the function of the architectural award-winning dance studios. They include a list of possible films, such as ‘Film things that are hard to explain’, ‘Film prevention’ and ‘Film text works’ – which is what happens to the list. I particularly liked the short videos of rapid touching of objects, one of the ways in which Gussin intervenes to call attention to spaces or things: his use of illumination rigs and dry ice (as in the well-known ‘Spill’, currently on show at Tate Britain) work similarly.

The Green Room, hidden under the cinema near Shoreditch High Street station, is only open on Sundays and by appointment with its energetic curator, Ché Zara Blomfield. New Yorker Kate Steciw’s European debut is well worth catching though, as she takes cloying sentimentality, hackneyed subject matter and kitschy means of reproducing photographs (on tiles, canvas and blankets) and undermines all that by turning their combinations into something quite other. The eponymous keywork distorts several copies of the commercially available metal wall text ‘Live Laugh Love’ into near-abstract sculptures which summarise the sardonic approach.


A legend trip – for example to the site of a notorious murder – is a rite of passage which stands here for the inner and outer journeys triggered by sculptures and sculpturally-constructed drawings and collages – all of which exchange forms seamlessly with the black-beamed patterns of Charlie Dutton’s distinctive Tudor space.  The centrepiece is a circular Kissing Gate: it turns to suit, and is draped with enough patched-up bicycle inner tubes to tell of considerable travel.  Add Klein Bottles, folklore and an imaginative programme of events, and there’s good reason to make the trip to Alison Gill’s first home city solo show in nearly a decade.

This wittily-titled exhibition consists of erotic-tending paintings by late amateur Anglo-German artist Eddie Wolfram... only Manchester-based Czech Pavel Büchler, who delights in the deconstruction of meanings, bought  them from his local Oxfam shop, stripped the paint off in patches, put the canvas through a washing machine, and recombined the pieces of paint back-to-front on the restretched canvas to make abstracts with a suitably washed-out look. The six ‘Modern Paintings’ which result are not only clean, but compelling in their nothing-newness. That said, you can see a wholly new work in the back room, a text piece which says ‘No New Work’ – but, logically enough, it’s not part of the official show. 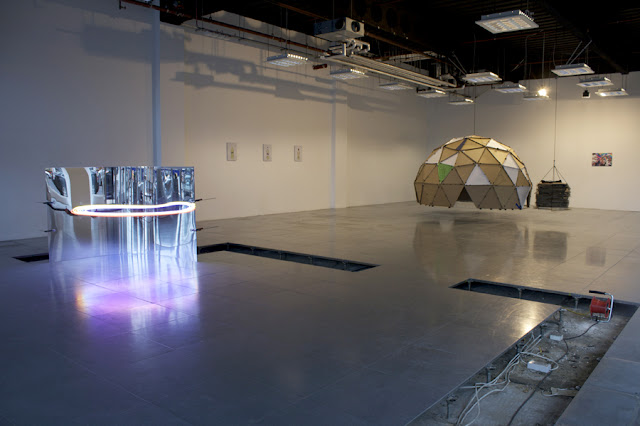 Steven Morgana: ‘The Future Feels Like a Phantom Limb’ @ La Scatola Gallery, I Snowden St (off ) –

It makes sense that Franco-Australian artist Steven Morgana should show in the corporate lobby-like La Scatola Gallery, for he proceeds to lure the viewer by transformation and beauty, only to lambast the energy-hungry nature of capitalism. A neon rainbow turns out to be fed by a petrol generator; a geosodic dome is built from boxes, the triangular basis of which generates the wasteful volume of off-cuts used as a counter-balance to keep the structure hovering above the gallery floor; and photographs of petrol in water bottles are titled to point out that the original water was the more expensive content.

Hany Armanious: The Plagiarist of my Subconscious @ Southard Reid, –

’s Egyptian-born 2010 Venice Biennale representative Hany Armanious is a master of achieving ‘possession without ownership’ by casting objects into other – surprising – materials, notably pewter and resin. That’s been done often enough that more is needed, and Armanious delivers that in two ways: through evocative combinations of elements within and between sculptures; and by presenting his casts on tables and frame-come-shelving devices which are themselves cast in resin. Thus, ‘ to Cry’ might be seen as four sculptures: a found element reminiscent of a modernism such as Brancusi’s; another (related) tradition’s totem head; its container; and the whole.

Sticking with Australians, Sally Smart tweaks the politically-charged history of collage to give a very lively account of one possible answer to her  question ‘Were there any women pirates?’ Here they are, formed like shadow puppets out of images and fabric cut to echo the seagoing tradition of tattoos, fizzing with rebelliousness and yet complex enough to be termed ‘exquisite’. The dark side of piracy remains current, whether on line or off , but these renegades have an upbeat feel: they’ve escaped conventional sex roles on the stateless non-space represented by their spectacular wall-wide boat, and it looks like a pretty smart move.

Here window meets computer screen meets wall on the spatially ambiguous ground of the canvas: what seem to be the romantic landscapes underlying Clare Price’s work have previously struggled to escape creeping pixellisation and chemical fluorescence. Her latest set of large paintings ease back the colour register, but now the scenic views must also contend with a good deal of veiling as well as a wide range of urban-tinged marks including a notably varied way with the drip. Not to mention the battle between four types of paint: oil, acrylic, household and spray. It all makes for productive tension, not least with the push and pull of old-fashioned beauty.

1 June – 6 July: www.joshlillygallery.com
Bolton-born painter Vicky Wright is interested in the other, unofficial, side of stories: here, conspiracy theories behind the London riots. That suits her use of highly-grained wood (which looks like it might belong on the back of the painting) and crates (in which art is normally moved) as the surfaces for her melding of genres. Portrait, industrial landscape and still life elements emerge as essences discovered in the sweeps and stains, drips and bleeds which make up what could initially pass as abstraction. Wright is also a notably effective user of earthy browns, suggesting other origins and helping to generate a satisfyingly distinct aesthetic.

No, that’s not a typo… both Flowers and the newly-reopened Photographers Gallery  currently feature Julie Cockburn’s sassy reworkings of found images and Canadian photographer  Edward Burtynsky’s magisterially broad depictions of landscapes shaped by
human activity: the biggest, mostest and baddest of all things oil in Ramilles Street, Spanish dryland farming in Cork Street. The latter are part of Burtynsky’s recent switch in thematic focus from oil to water. They catch abstract earth and crop patterns with such an eerily painterly effect such that – in a neat reversal of the double-take provoked by photorealist painting –  I couldn’t believe they were just photographs. They're achieved, it seems, by no more than shooting from a helicopter 2,000 feet up in dim light, and controlling the contrast.

Michael Joo: Exit from the House of Being @ Blain|Southern, 21 Dering St - Central

Blain|Southern will no doubt put on more spectacular displays when they move to their permanent premises in Hanover Square, but meantime Buddhist-influenced Korean-American Michael Joo’s exploration of the territorial impulse makes a focused impression. A philosophical backdrop feeds into the works’ complex titles, but at a simple level three means of asserting spatial supremacy are subverted: the velvet ropes which limit the encroachment of non-VIPs become dysfunctionally horizontal wall sculptures; riot shields act as reflective screens through which the viewer is drawn into the results of paint-bombing; and deer antlers, a signature motif of Joo’s, are defused as weapons by being covered in liquid rubber before being cast in polyurethane resin of a suitably aqueous blue.