MAKING DO WITH INFORMAL ARRANGEMENTS: RICHARD WENTWORTH AND MICHAEL WOLF 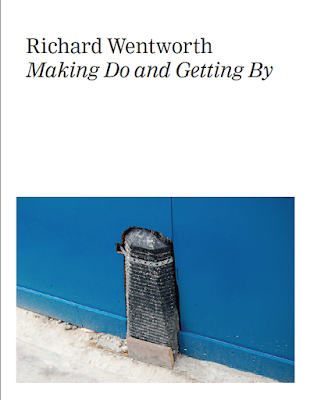 Most street photographers concentrate on the people or the townscape, but there are a few who avoid direct representation of either to focus on objects.  The most consistent current practitioners of that quirky mode – albeit as part of much wider practices – may well be Richard Wentworth, whose new book has just been published, and Michael Wolf, whose show at Flowers Gallery runs throughout December, with a follow-on book due in January.

Richard Wentworth is as well known for his wryly observational photographs as for his YBA-influencing teaching role at Goldsmiths and for the witty sculpture which first brought him to attention. ‘Making Do and Getting By’ is the first of two projected volumes of Wentworth’s photographs, and covers the digital years 2006-15. Volume 2, if that’s the right term, will give us the analogue years 1978 – 2005. This first book has 750 colour images in various sizes, making it the perfect way to look at the series and trace its themes and connections.  By way of introduction, the uber-ubiquitous Hans-Ulrich asks a few gentle questions, and the answers prove Wentworth to be an astute analyser of his own work.

In essence, Wentworth’s photographs of subliminal urban connections cast his discoveries as found sculptures. He sees the street as ‘a site of total gorgeousness’ through which people’s spontaneous and instinctive actions speak to him. Though no people are shown directly- it’s objects and leftovers which act as protagonists - Wentworth believes the photographs are ‘immensely collaborative’ and so ‘full of humans’. He particularly likes the contingencies which emerge from people trying to put things right. Does this connect with his sculpture? "I wonder if this isn't some sort of public humiliation for the history of sculpture’, he speculates. ‘The ordinary human is so proficient, so linguistically alert I sometimes wonder if I’m not just beating myself up with the authority of the world’.
Specific images act like puzzles in which we may wonder: what drew Wentworth to this?  For some 25 of the photographs here, he gives us the answer in the introductory interview: that adds to the enjoyment and provides a template for how we might go about answering that question in the other 725 cases. To take some examples: 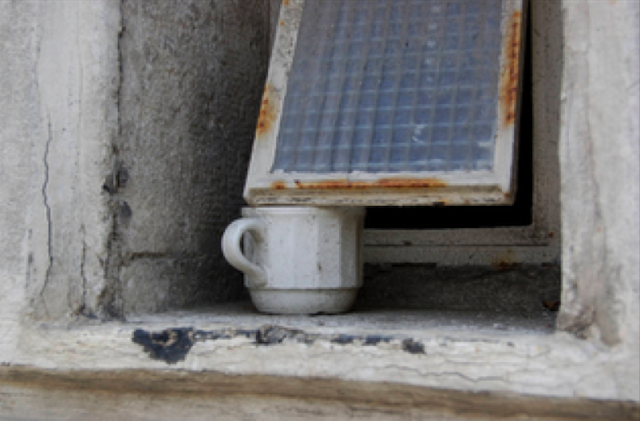 'It's a cafe in provincial France: a toilet window that they wanted to let some air through. I love the fact that the thing that makes you go to the toilet – a cup of coffee – becomes the instrument for keeping the window open.' 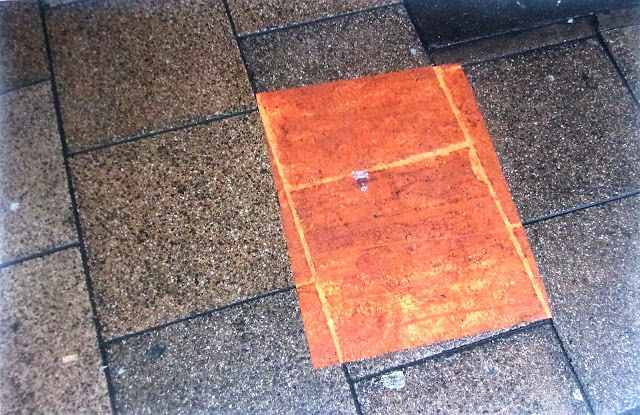 'Not all of these things are deliberate acts. It takes a lot of wet weather and a lot of feet for this piece of cardboard to mutate in that way. It's the origin of printmaking, the oldest method, which they would have known about in Lascaux'. 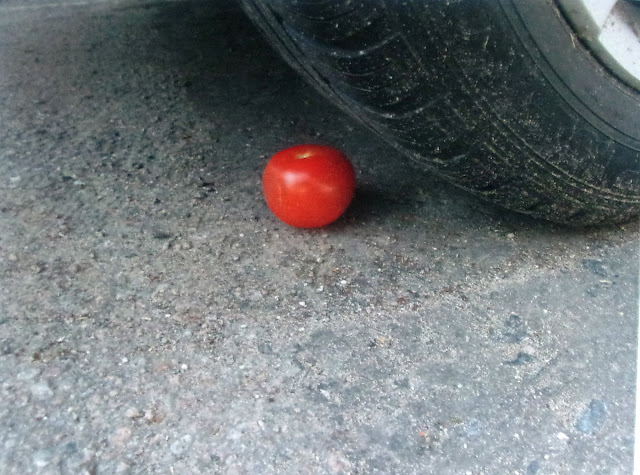 ' I walked out of my house one day and there was a tomato under the wheel, and you don't have to be a great detective to tell what this car has not been moving for a while, and that there have been some rainstorms.... the temptation is to think somebody placed the tomato under there!' but 'I think this tomato is a dropped tomato which found its way...  it's the fact that the tomato is like a cartoon – we know that it is fundamentally a squishy thing. The tyre is also a vegetable product, substantially still connected to trees and oil, and the tomato has been fertilised, probably with oil products' 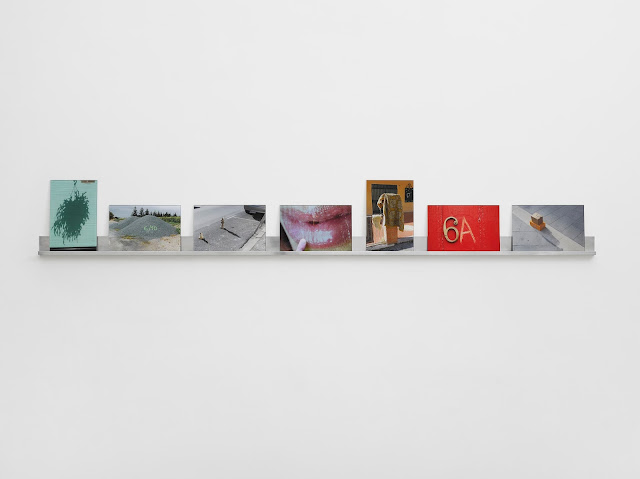 How much substance is there in this playful amusement? There is, says Wentworth, 'a lot of death... a lot of suffocation as in 'Amerixan and French cinema when I was a young adult - bodies in polythene bags'. Wentworth's analysis of human resourcefulness and improvisation concentrates on non-conformity, on what people do when they have to think for themselves, and how the same problems are dealt with differently according to individuals and their circumstances. You could also say that Wentworth leaves the readymade in its original place - everyday life - and so deconstructs the whole idea of repositioning it in a gallery in order to change how we see it... But, of course, he does that as part of an art practice....

Put those two aspects together, and we arrive at a world which is full of paradoxes, with a population which navigates around all that… The paradoxes multiply, and maybe that’s the underlying point: life is full of inconsistencies and contradictions, but they bring out the non-conformist inventiveness which is what Making Do and Getting By celebrates.  It’s not so much the rhyming forms, curious conjunctions or makeshift solutions which are celebrated, so much as the actions which lie behind them. Wentworth’s underlying theme is the everyday extent of human inventiveness, and by implication the need to preserve it. 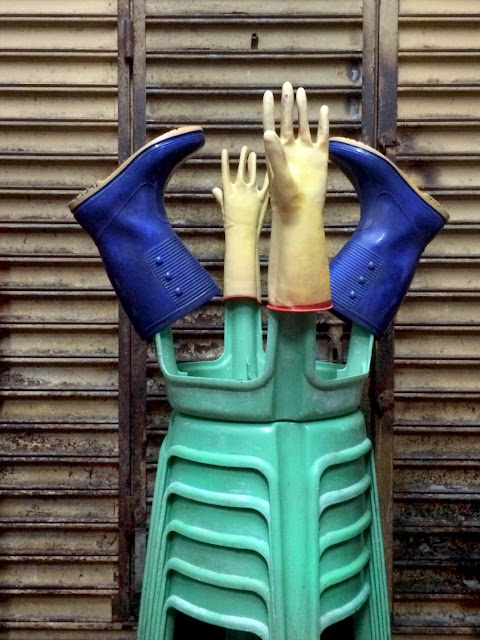 Munich born Michael Wolf lives between Hong Kong (since 1994) and Paris, but also visits China frequently. His best known photographic series are probably Architecture of Density, which scrutinises Hong Kong’s high rise buildings; Tokyo Compression, focusing on people on underground trains; and Real Fake Art, depicting Chinese painters of fake works alongside the works Wolf purchased from them, combining real objects of a sort with the photograph. Since 2004 (and so covering the same years as Wentworth’s digital output) Wolf has also been recording his wanderings round the hidden network of back alleys of Hong Kong. Those alleys, says Wolf, present ‘an authentic slice of Hong Kong’s grass roots culture’ and ‘should be nominated as a heritage site’. Situated between public and private space, they act as shortcuts between the main thoroughfares,  provide quiet resting places, and are claimed as much-needed storage spaces by local workers and residents (Wolf says Hong Kong is ‘still a sufficiently Confucian society’ for such objects to be left on the street without fear of them being stolen). 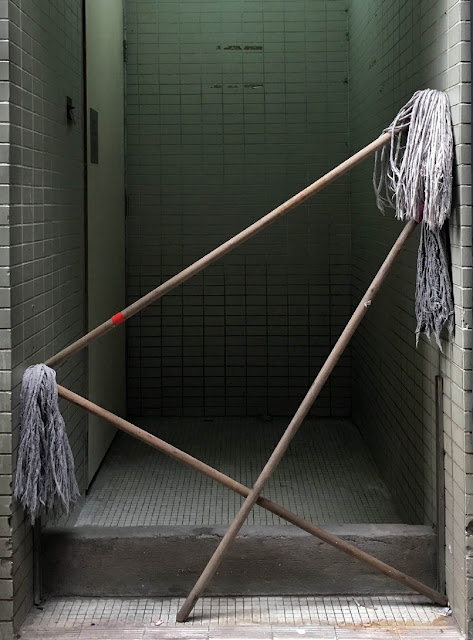 Wolf’s language is different from Wentworth’s, but the subject and spirit relate.  Wolf is similarly interested in how functional decisions lead to unintended aesthetic results, but is more closely invested in building up a picture of how that relates to the working patterns of a particular place, and in how solutions vary over time.  The exhibition places clusters of images into themed groups, such as gloves, exhausts, tape and clothes hangers. My favourite set is of mops. Left in store or just to dry, they take on an anthropomorphically bewigged look and also, suitably given their relationship to water, resemble fountains. Even better, Wolf has found one alcove in which they are left to dry while at the same time placed to discourage urinary urges: this double function leads to a modernist effect, of which Wolf has found three different arrangements / solutions in the  same alcove over the years. He also shows short video loops of some scenes with movement such as fluttering rubber gloves. 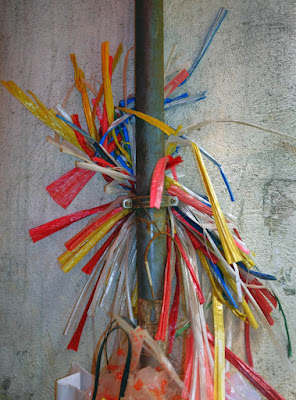 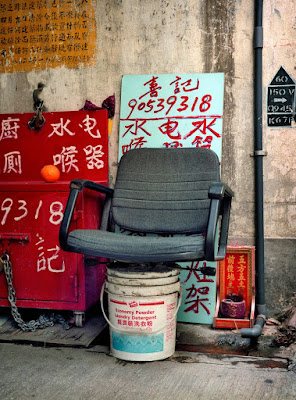 Wolf brings his photographic subjects further into the realm of the real through a window display which acts as a typology of items appropriated from a Hong Kong back alley, with string and wire hangers prominent; and in the gallery , where ten of his collection of some 100 of what he calls 'bastard chairs', are set on plinths. He buys them on the street or else arranges to replace them with a new one. They’re mostly from China, are small enough to be transported easily by air, and demonstrate the owners’ abilities to patch up and re-use. Another group of photographs features more makeshift chairs, including some which have found themselves with three legs, and one with two short and two long legs, having been sawn off as an adaptation to place them on steps.

Wolf’s encyclopaedic collection of items photographed and found builds up to a portrait of a society, with a feel for communal trends. but if Wentworth depicts a tendency, it is probably the tradition of eccentric individuality.  Atget is the obvious precursor of both photographers, but only Wolf’s typologies – how to sit in a restricted space, the patterns made by string hung from hooks, the shapes of vents and air conditioning units – call to mind how the Bechers present the variations in conformity of industrial buildings serving a common purpose.  And Wolf’s path has been from photograph to object, Wentworth’s from object to photograph.

So there are differences as well as similarities in these two fascinating bodies of work: what’s not in doubt is that the chance to explore them in parallel is a welcome one.

Posted by Paul Carey-Kent at 00:03 No comments: