This selection tends towards the uncanny, disturbing and deceptive, ranges from Cole to Coles, includes two distinctive ways of making video painterly, and features many works which take explicit account of the viewer's position - which will, I suggest, be a rewarding one in the following galleries...

The Dutch artist Jacco Olivier has become known for telling stories through films built up from repeatedly reworked paintings. His new show dispenses with the narrative to present classic themes from the history of painting – landscape, nude, portrait - in slowly changing forms which also refer to various historic painting styles – impressionism, expressionism, abstract expressionism. That provides for more focus on the losses and gains from his technique compared with straight painting. The texture and visceral presence of paint is lost, the sense of immediate connection to the artist’s hand, and most of the difference in perception from differing distances. But the colours are intensified by the electric light, and the gestural quality of the painted marks are emphasised by magnification of what are actually small canvases – especially in ‘Revolution’, a 24 minute (at one minute per hour), 240 inch wide tour de force projection of a universe rotating about its axis. ‘Revolution’ also exploits the more complex space which can be created by overlapping layers of paint when the layers can move relative to each other, an effect which is just as strong in a Lanyon-like aeriel landscape. I didn’t leave Victoria Miro fearing that conventional painting is dead (again), but I did leave believing that Olivier has found a mode which works for him as a valid alternative to it. 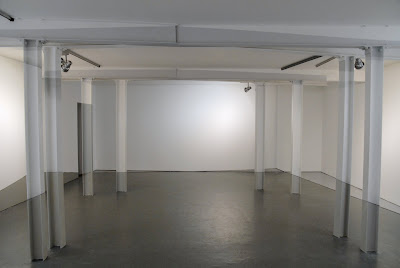 The cul-de-sac in the middle of Vyner Street provides a double dose of perspectival illusion at the moment. Two years ago the German installation artist Sinta Werner built an imaginary mirror into the Nettie Horn gallery. Now she has painted an out of kilter version of the same room onto itself: as with the mirror illusion, it all makes sense from one central point, like a minister’s view from Parliament perhaps, but as soon as you move around the gallery (or country) the partiality of that one view is exposed. This sort-of trompe l'oeil in reverse is accompanied by collages which take related approaches. See Nettie Horn's site for my conversation with Sinta. 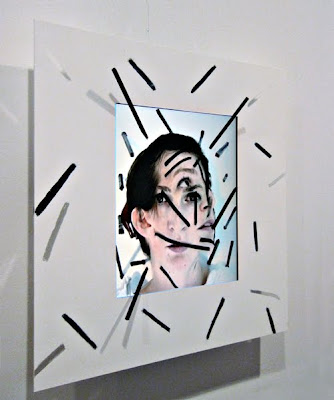 Sean Branagan: Tart of the Day

Over the road at the Gooden Gallery, Sean Branagan's Smiths-entitled show fuses painting with video not by animating painted scenes, but by including elements which echo back and forth between the sculptural construction of the screen and what it contains. In 'Fleshless Lovers' that takes the form of colour revelations by the opening and closing of painted feet which manage to be at once sexy and comic. His latest works ('Odd things persist for inexplicable reasons' and 'Tart of the day' - not what you might think but the model's choice from the menu at the cafe afterwards) seem to have arrived at an extreme version of cubism. They show a face lit from within and without, and projected twice, one on top of the other - the model is unadorned in one take and painted with graphic marks in the other. Meanwhile, the frame around the image contains versions of those same marks: as positive and negative graphic forms, as sculptural forms and as shadows thrown by the sculptures. 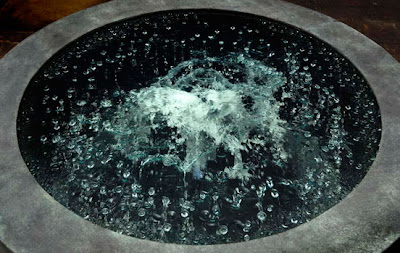 I’ve previously mentioned the joint merits of the Kings Place and Pangolin Galleries in the splendid canalside King’s Place building. Both have two substantial shows on currently. The former has Anthony Wishaw and the unusual environmentally-oriented ‘Unfold: A Cultural Response to Climate Change’, a wide-ranging show derived from trips to the Amazon and poles which features artists alongside such wider cultural celebrities as Feist, Lemn Sissay and Ian McEwan. I liked a video-documented automatic drawing which rather appropriately collaborates with nature: Daro Montag, who has worked with toads and worms in the past, arranged for leafcutter ants to produce an entrancingly-generated image out of carbon (in this case candle soot, which ants don’t much like). Paladin has photographer David Bailey’s surprising sculptures and William Pye’s dramatic use of water as a sculptural element in ten major pieces spread around the complex to invite what one might term the enjoyable game of Eye Spye. There’s an extra helping of Pye – mainly maquettes – at Osbourne Samuel: the joint show celebrates a monumental new monograph setting out the impressive range of his work, which has tended until now to be seen through specific commissions more than through gallery shows. 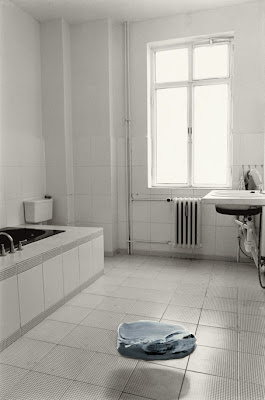 This is the first British showing for Marc Lüders (born Hamburg, 1963), though he is well-known in Germany for his characteristic methods of playing off reality and illusion by painting onto photographs in various ways. This exhibition provides a substantial taste of his main strands: abstract brushstrokes which take on quirky life in landscapes photographed for the purpose by Lüders; additions to the Berlin Walls’ East Side Gallery graffiti; realistic figures painted into upside down photos of supermarkets in visually striking meditations on the topsy-turvy nature of consumerist values; and images from Abu Ghraib in which the effect of the overpainting is to remove the figures without removing our awareness of their former presence. They lure you into a rather distinctive world, which may be why Patrick Heide has chosen to add boldly to the mix with ramshackle sculptural installations by RCA MA student Vasilis Asimakopoulos.

The German artist Gregor Schneider, best-known for the total work of art through which he has successively transformed his house in Monchengladbach over the past thirty years, has shown little in London recently so this is a welcome mini-retrospective. Downstairs, I was reminded of how Schneider has speculated on the possibility of exhibiting an already-dying person as art, in order to capture what he calls ‘the beauty in death’. Here we see bits of bodies spotlit out of a dark dense enough to make it unclear whether they are full corpses in bin bags or dismembered remains. Upstairs are sculptural elements and photographic evocations, clinical as the records of crime scenes, from the house and other previous installations. The whole show casts the visitor as a troubled voyeur and gives a strong taste for the nature of Schneider’s work as a whole, which operates very directly in accordance with Freud’s definition of the uncanny as being what‘ought to have remained secret and hidden… but has come to light’ – just like the bodies in the basement. 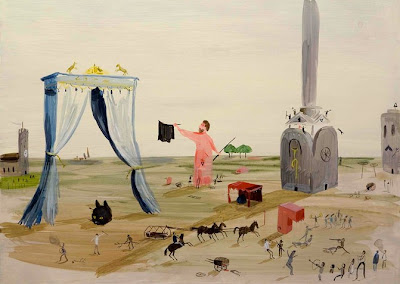 Tom Cole's new gallery concentrating on young artists has made a good initial impression. Robert Nicol paints provocatively at the edge of illustration in acrylic on perspex, which seems to suit a casual, spontaneous style. He combines the naivety of historic folk art, such as sporting and military pictures, with a more sophisticated use of perspectival space than is usual in those genres. To be broken on the wheel was one of the most barbaric ways of being executed in the middle ages, and Nicol has a grotesque yet cheerful way with violence, putting me in mind of Nathalie Djurberg’s films. He suggests he may be influenced by having a pathologist, mason, butcher and dentist among his immediate forebears! Nicol's imaginative scenarios feature, surreal transformations and an interest in public display: people ride fingers for horses round phallic towers, lop off limbs and engage in circus acts in what seems to be a mock-sadistic send-up of social ritual. 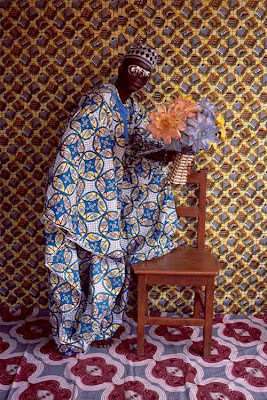 Three new shows have just opened at the Edel Assanti-coordinated six floors of 276 Vauxhall Bridge Raod. Added to Holster Projects (on the top floor till x x x), they make an energetic combination. Lucy May’s ‘Suburban Baroque’ is domesticity gone perversely out of control, with distended pile-ups of wax, foam and cloth trussed up on pebble dash plinths. Jack Bell shows Leonce Raphael Agbodjelou’s portraits from Benin. They’re African studio photography gone hip hop psychedelic as the exagerrated colour and patterns of the backgrounds vie with the subjects’ extravagant clothes. And recent graduate Sarah Pager makes the best use yet of the basement project space with three installations in which the body seems to attempt an escape from its realities. Eyes are trippily closed to take in the sun. A whole makeshift room breathes. Floor-sweeping eyelashes take over who knows what orifice. Pager is interested in bodily processes and quantum physics: the latter didn’t strike me as prominent here, but does lead me on to… 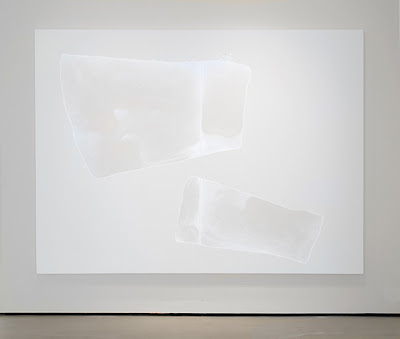 This is the third show in the London incarnation of the international Moscow gallery Regina, and sees it expand beyond the natural-enough Russian content of the first two with a restrained yet lively group show of six Berlin-based artists whose abstract works can be seen as combining material with spiritual and east with west, and ‘oscillating’ in the show’s own words, ‘between the medium and its aura’. Olaf Holzapfel’s gridded hay and Gregor Hildebrandt’s gestures towards the lost sound of the cassette tape from which he makes his paintings both exploit their materials to that end - what you hear isn't Hildebrandt's painting but composer Bert Wrede's soundtrack to the show. The highlight is Daniel Lergon’s big audience-responsive exploration of the interaction of paint and light, which he composed ‘in the round’ using lacquer on retroreflective fabric close to white on white so that it appears glowingly and then almost disappears depending on the viewer’s angle. At its most explicitly visible it shows two forms in space which could, thematically enough, be asteroids in space or – according to Lergon, who has a keen interest in science – the metal plates in a vacuum which produce the Casimir effect, an apparent force out of nothing which has been proposed as the mechanism behind the big bang. Either way, it’s beautiful. 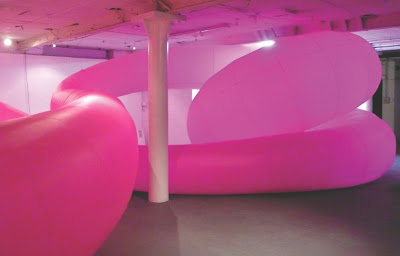 To 10 Oct (Fri-Sun only): www.schwartzgallery.co.uk

The artist-run Schwarz Gallery is one of several spaces which have sprung up in Hackney Wick in recent years. Sculptor Michael Shaw has made full use of a cavernous 20 metre-long space by installing a pneumatic intestinal sculpture which wraps itself around its several interior columns and breathes in and out over a five minute cycle. Fully inflated, it pushes up against the gallery’s boundaries as if trying to escape even such large confines, or else to take it over. The reflection from its pink sheen similarly infects the walls. Shaw also shows colour-shifting wall pieces, just as organic and singular in form, lit from within by computer-controlled LED displays. It’s hard not to think when faced by such changeability in this location of the lurking presence of the Olympic Stadium and the transformation which its construction is bringing to the surrounding communities.


Tour Suggestion: There's plenty to be said at the moment for a walk north from Ancient & Modern's stimulating show of Austrian artist Rulolf Polanszky, a friend of Franz West who shares much of his spirit; to the elegant French games of Clement Rodzielski at Sutton Lane; up John Street to Rod Barton for James Ryan's paintings (Saturday only); veering slightly east for Jacco Olivier (at Victoria Miro as above) and the nearby Parasol Unit double header of new graduates and Adel Abdessemed (from 22 Sept); then concluding in Wharf Road with the Waterside Project Space's witty delve into the nature of corners.

Steve Bishop to 25 Sept, Joana Vasconcelos to 25 Sept, Keep Me Posted to 26 Sept, Chelpa Ferro to 30 Sept, David Blandy to 2 Oct, WITH to 2 Oct, Alex Gene Morrison to 2 Oct, Reanimation Library to 16 Oct, Alejandro Ospina to 31 Oct, The Body in Women's Art Now to 5 Nov, Mike Nelson to 3 Jan