This is a new-style mix of preview and current review material ahead of Frieze week. There's almost too much art to see in London during October, with many galleries looking to put on their best shows alongside the Frieze Art Fair, not to mention Raphael at the V&A and the Tate's Gauguin blockbuster. This is therefore a very selective Pick & Mix ranging from small to large, public to private, little-known to famous... but with not one but two shows featuring daily sculptures.

Nathaniel Rackowe: What the city left behind @ Bishoff Weiss, 14A Hay Hill – Central

This exhibition completes a year in which Nathaniel Rackowe and his wife, Rana Begum, have both had two solo shows in London, which must be some kind of record. And Rackowe seems to have drawn inspiration from his wife by adopting her signature material of powder-coated aluminium to striking effect - both in components of his light-emitting sculptures, and as the ground for two dimensional works using bitumen paint. Both exploit a high impact fluorescent yellow to ramp up the intensity in evocations, through the medium of reworking marginal architectures, of the sub-conscious of the city. 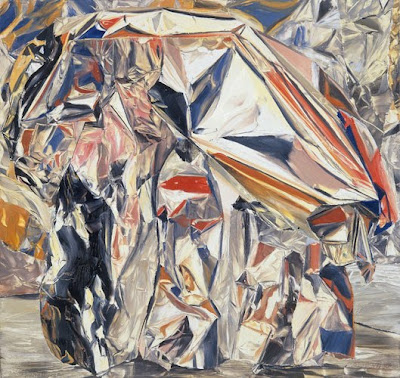 William Daniels became known for making torn paper tableaux of famous images, which he then rendered as realistic paintings at once modest and oddly monumental. He has recently expanded his range, and the technical difficulties he faces, by devising his own compositions and using metallic foil to make the maquettes to be copied. That increases the unpredictable role of light on the various angles of what are more abstract paintings, often with hints of faces. The results, poised between the real and the reflected, are as beautiful as they are spatially baffling. 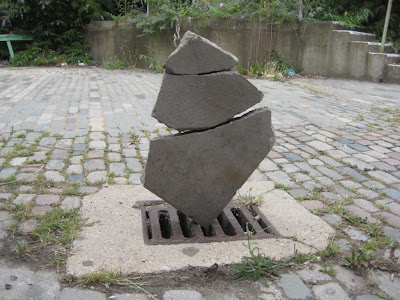 Teasing at our differing expectations of art, architecture and the contents of a skip, Graham Hudson incorporates scaffolding and building site materials into monumentally fragile installations. He was well suited, then, to six months as Kings Cross artist in residence, utlising what lay around in the rapidly developing area to make a sculpture a day for the 181 days and an installation in the UK's first purpose-built gym space. Hudson promises a ‘noisy sprawling Vision of closed down nightclubs, brothel ghosts, ruins and stacks of breeze blocks’ as a ‘psychological antidote’ to the utopian aspirations of the KX development models downstairs in the same building. 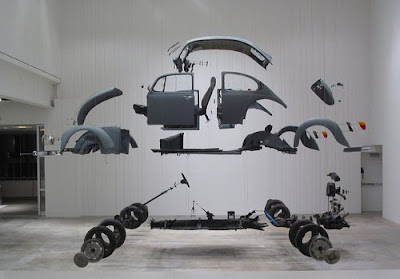 Damián Ortega: The Independent @ The Barbican

Talking of daily production… Over the past two years, a succession of well-chosen artists has engaged innovatively with the unusual dimensions of the Barbican’s Curve Gallery. Next up is the adventurous Mexican artist Damián Ortega, who has manipulated and pulled apart all manner of things from tortillas to bricks to a Volkswagen Beetle which he disassembled, hanging the parts up on wires. Now he plans – with echoes of his former career as a political cartoonist – to fill The Curve with unusually current art by making a new sculpture every day in response to what’s in the news. 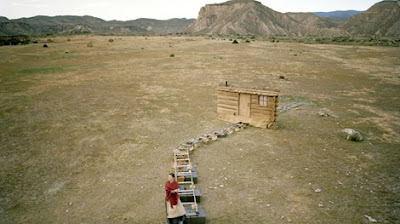 Still from one screen

German artist Julian Rosefeldt's ‘American Night’ is a 40 minute loop on five screens, impressive enough to transcend the potentially jaded trope of using the tradition of the Hollywood western to comment on current American politics. It deconstructs the mechanisms of cinematographic narratives at the same time: for examle, one screen brings Bush and Obama puppets into a raucous tavern scene, another fabricates the musings of cowboys round a camp fire out of Hollywood, political and rap quotes. The lesson might be that American foreign policy has been made in the way of a movie, and bears similar connections to reality…

How familiar are you with the group of artists currently considered cool in New York, most famously connected through the rebelliousness of the late Dash Snow? They haven’t been shown all that much in Britain, so this presentation of small works by a dozen of them is welcome. Dash himself features via a punchy anti-Bush diptych, and his one-time wife Agathe with a sculpture improvised around an appropriated traffic cone. Look out for Ry Fyan’s paintings, which flip back and forth between collaged elements and their painted imitations in an intricate mash-up of artistic and everyday registers.

You may know Susan Collis as an artist whose work is easily missed, as she’s played with the values of material, labour and art by reproducing, for example, what look like accidental splashes of paint in mother of pearl. Collis is less interested, though, in invisibility than in rescuing the overlooked, and there was an emotional aspect to that in her major show at Birmingham’s Ikon six months ago. That continues in this show through new paper sculptures, assemblages, and drawings in whihc the stand-out pieces are made not with but from the leads from pencils. 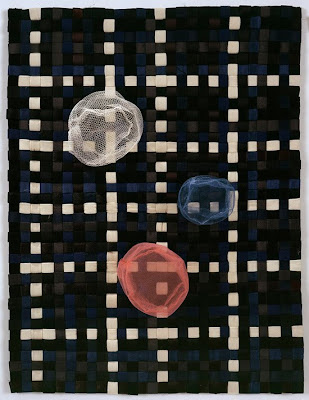 Hauser & Wirth inaugurates its enormous (10,000 sq ft) new space on Savile Row with seventy drawings made from collaged clothing and fabrics plus four large sculptures, all made in the decade before Bourgeois’ death earlier this year. Textiles are central to Bourgeois in the context of the domestic traumas which drove much of her output, given that her parents ran a tapestry restoration workshop in which she helped. An artist’s stock often rises or falls sharply posthumously, and the reception of this show may help indicate which way Bourgeois’ reputation will move. 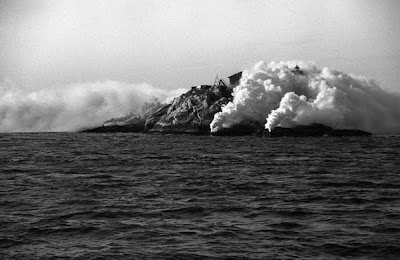 The impressively-appointed Calvert22 has presented a succession of interesting takes on East European art since opening last year, and now gives a first British solo show to the Russian ex-nautical engineer and submariner Alexander Ponomarev. He’s probably best known for the project through which he has linked up various art locations by having his submarine surface at them, but Sea Stories is a chance to assess the hidden depths in a much wider range of work including installations, films and images distorted by being subjected to the water pressure 4km below sea-level . 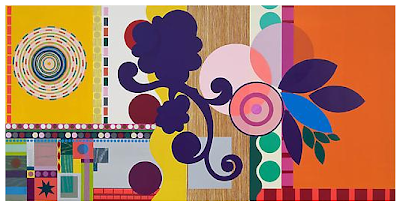 The Brazilian painter and collagist Beatriz Milhazes (born 1960) creates her own intoxicating world of colour and movement through a tropical blend of ornamental pastiche in which gardens, carnivals, op art, neo-conctretism and the baroque collide. Milhazes often applies her paint through layers achieved by painting onto plastic, gluing that to the canvas and peeling it away to leave the image. That should translate well to brightening up the expansive front window of the Stephen Friedman Gallery with a site-specific vinyl drawing. There will also be a new large-scale triptych inside the gallery.
Posted by Paul Carey-Kent at 23:06