TWO FOR ONE IN MARCH

﻿
There's a trend towards double shows of a single artist: David Shrigley at the Hayward and Stephen Friedman; Yayoi Kusama at Tate Modern and Victoria Miro; Lucien Freud at the NPG and Blain / Southern and Alighiero e Boetti soon at Tate Modern and Spruth Magers, advance guard for which is Gavin Turk’s entertaining homage at Brown Fine Arts. No room here for those, though, nor for Thomas Zipp’s charged Freudian installation at Alison Jacques;  the Hauser & Wirth pairing of Michael Raedecker’s cut and re-sew with Mary Heilmann’s happy-pink hippy-punk; Goncalo Mabunda’s haunting masks of decommissioned weaponry at Jack Bell’s new space in Mason’s Yard; Ori Gersht's equally war-haunted films at the Imperial War Museum; and Iain Hales' sleek sculpture-painting propositions at Cole – but you’re advised to see those too! So there's plenty on: that’s a dozen shows already before I start…

Leipzig-based painter Rosa Loy shows 18 quirkily characterful watercolour sketches, made at the time of Tautropfen (dewdrops) before she leaves the house for her studio, and travelling ahead of her towards her paintings (of which we see three). The images have the atmosphere of an alternative world, some of which may be down to them featuring thirty-odd women and no men. Loy told me it isn’t a strategy – as in Gilbert & George’s opposite tendency – but just how the drawings spontaneously turn out; there again, she's also said it's part of a vision for strengthening the role of women in society...  Either way, one man definitely at the opening was her husband Neo Rauch – and they’re among the couples who’ll collaborate on a work for Pippy Houldsworth’s innovative next show, Sweethearts.

Seven ‘dizzying landscapes of the mind’, as the punchy press release puts it, see Dolly Thompsett’s fourth London solo show effect a double layering. Physically, by being painted on linen textiles, patterns from which show through; by the paint sitting under and over resin layers; and by the application of surface effects such as glitter. Then an equivalent layering of content, as a wide range of sources - historical, geographical and cinematic – come together to intricate yet dramatic effect. See www.vigogallery.com/?dollythompsettinterview for my conversation with Dolly, which includes an explanation of the evocative title.

Sprovieri makes good use of its recently-expanded space to show a 50 year retrospective with a twist: a dozen triptychs each chosen from a different project by the hard-hitting Ukranian photographer Boris Mikhailov. Set up to echo religious themes and imply a series of beginnings, middles and ends, they include early examples of the ironically critical anti-Soviet work which could be defended as merely pursuing beauty; fully-fledged narratives taken from curious news reports; pseudo-edenic groupings of the poor; several from his disturbingly explicit yet humanely accepting cycles depicting the poor and homeless; and the artist himself, naked in the biggest prints, playing with a fake phallus.

In a show concentrating on somewhat polite geometric interventions in photographs to create alternate perspectives, young London-based Lebanese photographer Rasha Kahil has a corner which stands out. She shows photographs, from a series of 36 taken opportunistically over three years, which innovatively skewer the boundary between private and public. Whenever friends left her alone in their houses, she rapidly photographed herself naked. Their reactions when she told them later are an implied aspect of the work, which combines a subversive invasion of space with an assertive use of the body: aspects of Vito Acconci, VALIE EXPORT and Larry Sultan came to mind, which can’t be bad…


Calfornia-based French photographer Lise Sarfati’s 2005-09 series ‘She’ arguably takes off from classic Cindy Sherman more persuasively than Sherman’s own recent work. Every shot features one of the same four similar women - two sisters, their mother and her sister. They’re drained of normal identifiers by appearing in unfamiliar cities and in wigs, so it becomes unclear who’s who and to what extent they’re acting. The focus is thrown onto their faces – which give little away – and on the older women’s distinctive tattoos, which read as marks of life. Sarfati has called the result ‘a woman with four heads’: a confusing play across identities which draws you in as it pushes you away.

Carlos Noronha Feio is a wide-ranging Portuguese experimentalist whose rigorously perverse videos of self-set tasks and richly conceptual rugs I have previously enjoyed. This show takes the rigorous perversion in a new direction, as it consists purely of collages of plant forms made from photographs of nuclear explosions. They’re classified according to the system used by botanist E.D. Merrill in his 1945 guide – for US military use – to the plant life of the Pacific World (do ask to see the book). It’s a neat way of yoking military and domestic, horror and beauty, creation and destruction etc, but the key is how the collages take on an unpredictable life of their own, as if the backstory is merely a pretext. 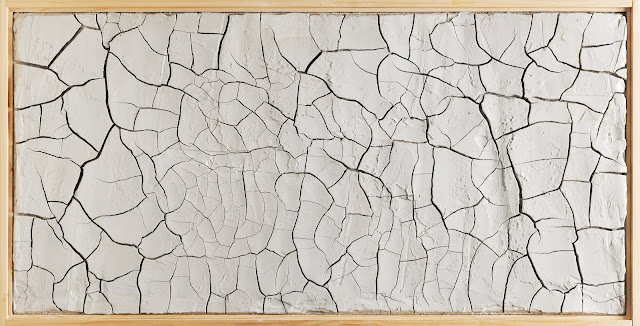 Alberto Burri (1915-95) is a plausible challenger to Eduardo Chillida for the title ‘best footballer to become a famous artist’, but neither that nor his foreshadowing of Arte Povera and Nouveaux Realistes approaches have been enough to make him a big name in Britain. This three room 50 work overview goes beyond the relatively well-known works incorporating sacking or burnt elements to include early figuration; his late 1950s ‘paintings’ with iron and tar; the move to insulation Cellotex in his last decade; and the Cretti, which set up a process of cracking. Land and bodies often come to mind, though Burri denied such references, let alone the existential readings they can trigger – and, radical and violent as his methods were, the results do now seem mainly to be eerily beautiful and beautifully judged.


The most serene and yet assertive room in London must be at the Courtauld, which provides a more balanced face-off than Tate Britain’s Picasso-trounces-Brits. You get eight classic Mondrians (only two of them normally on show in London) set off against five of Nicholson’s white reliefs. So flat colour-delimiting lines of paint meet spatially-generated lines of shadow, both aiming to find the spiritual in abstraction. They’re all from the 1930’s, during which Nicholson championed Mondrian and facilitated his move to London (1938-40). There’s archive material, too: you can see that Ben didn’t plan to stay long when he visited Piet’s Paris studio on 21 October 1936, as his appointment diary says ‘2.00 Mondrian, 3.00 Skiing lesson’!
﻿
﻿
John Wood and Paul Harrison: Things That Happen @ Carroll / Fletcher, 56-57 Eastcastle St – Fitzrovia

Carroll / Fletcher has quite a wow factor for a new start-up, featuring six purpose-designed spaces which allow for a very full chance to catch up with what Wood & Harrison have been up to since their last London show in 2005. They still tend to apply the tropes of minimalist repetition to push wittily against the boundaries of absurdity, but with a less straightforward reliance on their own performative actions to do so. Many of the new works seem to relish futility: I particularly like the elaborate construction of successively raised blinds which amount to no more than a ‘Blind Spot’; and the hundred quirky glimpses into imagined office lives which suggest such work is no more than a diversionary activity.

Danny Rolph’s multiple artistic, scientific and cultural references from Tiepolo to particle physics, from children’s clothes to architecture play into abstract games without frontiers (with a twist: Peter Gabriel was kissing baboons in the song). He uses three modes which feed each other: the small collages through which ideas take form; the ‘triplewall’ which layers collage and painted elements across and within semi-transparent building plastic; and large acrylic canvases which pick up on the spatial complexity and divert it in more painterly directions. All three are featured here, but the paintings, bursting with contrasting visual languages, take centre stage.

Images courtesy of the relevant artists and galleries
Posted by Paul Carey-Kent at 04:18