There’s more art in New York than anywhere else, and Armory week boasted several fairs as well as the usual 50-odd institutional spaces, some of them huge, and over 400 commercial galleries - roughly half in Chelsea, a quarter mid-town and on the upper east side, and a quarter down town in the more recently thriving Soho / Bowery area. Pretty hard to narrow to ten plus an out of town bonus, but here goes...

Several New York galleries are showing abstract paintings which emphasised their objecthood (I also liked James Busby at Stux, Michiel Ceulars at Anna Cristea and Zak Prekop at Harris Lieberman). Donald Moffett may have taken that furthest. He had already established a repertoire of holes, together with a similarly fetishistic way of extruding paint into a texture like artificial grass. Now he extends the holes into tunnels through contraptions which hold the paintings away from the wall, feeling that the wall ‘has let him down’ as a place to put paintings. 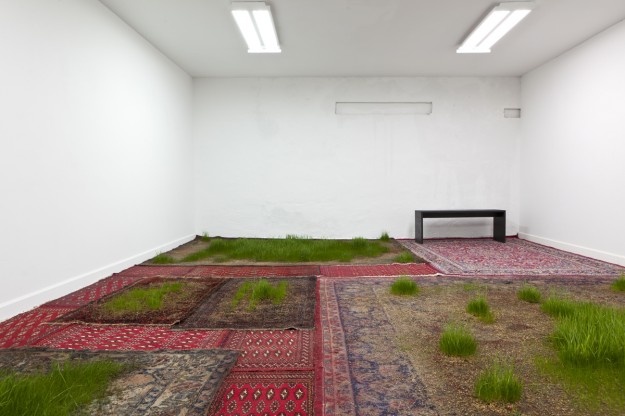 On to real grass: downstairs at this young gallery the New York based Austrian artist Martin Roth, whose CV includes releasing crickets as a sound piece and turning his studio into a bird retreat, had persuaded it to grow through Persian carpets. This - especially after seeing Moffett’s show – seemed a further step in radicalising the painting process as well as combining inside / outside and nature / culture in a way which reminded me of Walter de Maria’s nearby Earth Room, which Dia still maintains. And Wardell Milan, upstairs at Louis B. James, is also interesting.

Newcastle-born Indian Bharti Kher swells domestic concerns to fabulous size and fabulent effect. There are fresh variations on her characteristic use of bindis, some on shattered mirrors, some on a found staircase reaching only to the ceiling. The title work is a room of old American radiators which Kher assured me really had been shipped to India and back, picking up an aura as well as shipping costs along the way. Bodes well for her biggest British showing yet – at the Parasol Unit in September… 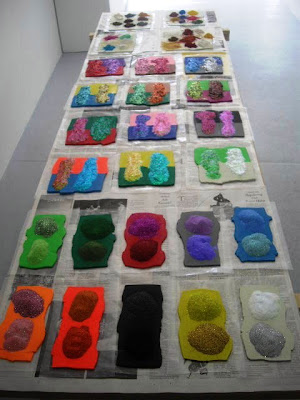 This gallery, small by New York standards, is packed with tables on which which Polly Apfelbaum has arranged explosions of colour and glitter which can be moved only with great horizontal care. Adventurous, but consistent with her previous conflations of painting and installation through fabric works on the floor. The result was startling and beautiful enough that the 'revolts' were selling despite the challenges of moving and displaying them.

Jeanne Silverthorne mines her 19th century Soho studio as a physical, emotional and creative place through thirty new sculptures, made in clay after the studio’s features then cast in silicone rubber to haunting effect. They include floor pieces with grow-through dandelions, a light bulb with a genuinely circling moth, a series of storage crates (are they the work or its containers?) and - slightly more off kilter - sticks of dynamite, and the abstract presentation of offcut globs of rubber. Peripheral, perhaps, but peculiarly affecting.

My favourite among the major shows was the timely retrospective of John Chamberlain (1927-2011) at the Gugggenheim. A chronological spiral up the ramp revealed more variation than I had expected from the his base of combining junked cars: the addition of expressive colour to the found elements from 1972 onwards, crushed box and foam works which foreground process, smaller works made from Tonka toys, the late adoption of a more minimalist chrome and white palette using only selected parts of the cars, and alumnium foil works. It all looked tremendous. 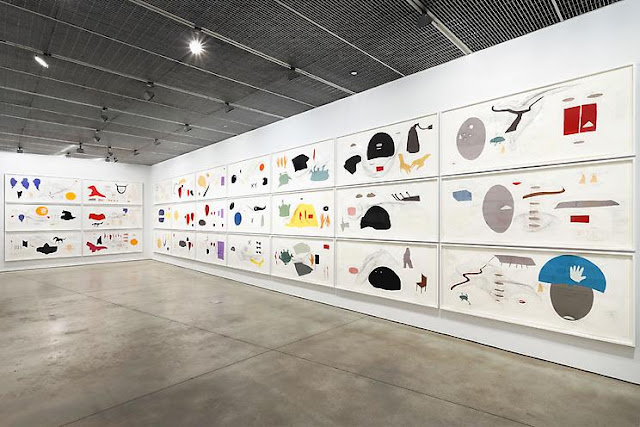 When I asked how to spot upcoming German artist Jorinde Voigt at her crowded opening, I was told she looked like a model – tall and beautiful with a trendy short haircut. So it proved, and her work is just as striking: cool objects and intricately annotated rhythmic drawings which pull you in whether or not you follow through on the complex intellectual algorithms which underpin them. The Lisson Gallery brings an overview of her previous work to England 21 March - 28 April .


Francesca Woodman, who killed herself aged only 22 in 1981, is having something of a posthumous moment in New York. That includes a retrospective at the Guggenheim; her largest single work, 'Blueprint for a Temple', on show at the Met; and this broader exploration of her blueprints (ie photographs, drawings and texts run through an architects' blueprint machine) from the summer of 1980. They're actually sepia and purple as well as blue, and combine zig-zag motifs with a broader cultural references than the  intimate black and white photographs for which she's best-known. Is the myth too big for the work? Perhaps not.

What looks at first like a room full of those Lichtenstein mirror paintings which combine a metaphor for painting with a paradoxical failure to reflect proves to be a series of copies made by Horowitz and 19 other artists from a small image of the original. Consequently the results are rather variable, emphasising the differences of hand and eye. Thus, they constitute self-portraits of a sort, leaving their multiply-unreflected viewers to ponder where they stand.

This is a surprisingly broad and fascinating account of the role of drawing in Flavin’s life: his early use of it to teach himself; plans for possible light pieces; records – by others under his supervision – of finished installations; impressively economical portraits, landscapes and seascapes he sketched for pleasure; and items from his own collection of master drawings with a comparable emphasis on the exploratory rather than the finely worked. 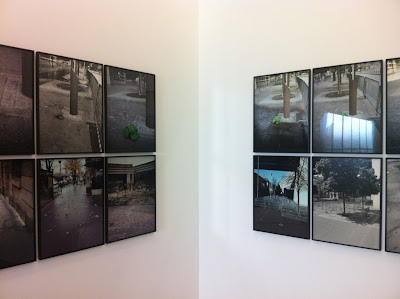 A pleasant 75 minute train trip north brings you to Beacon, where the Dia Foundation has spectacularly converted a factory to show its mass holdings of Flavin, LeWitt, Serra, Bourgeios, Knoebel, Heizer, Martin, Beuys etc in ideal conditions. I was also impressed by the temporary exhibition of French artist Jean-Luc Moulène, especially ‘La Vigie’ (‘The Lookout Man’) a series of 299 photos telling the seven year(!) story of the life of a Parisian weed and its surroundings near the Ministry for the Economy, Industry and Employment. We see the weed flourishing and cut back in turn, an outsider dealing with hostility…

Images courtesy of the relevant artists and galleries.