NO PAINTING IN APRIL

The best show in London now is the exemplary Boetti survey at Tate Modern (to 27 May) and it has two very worthwhile pendants: three floors (used for the first time) of neatly complementary works at Spruth Magers (to 31 March)  and Gavin Turk’s homage at Ben Brown (to 20 April). Another fine group of three shows are spread across the two Lisson spaces: Dan Grahams’s pavilions,  Jorinde Voigt’s striking full debut (see my recommendations) and a particularly inventive set of explorations by Spencer Finch (all three to 28 April).  Once you’ve seen those six (!), I also recommend the following, which similarly fail to feature paintings… the late Dubuffet show at Waddington would be my choice for those who want some. 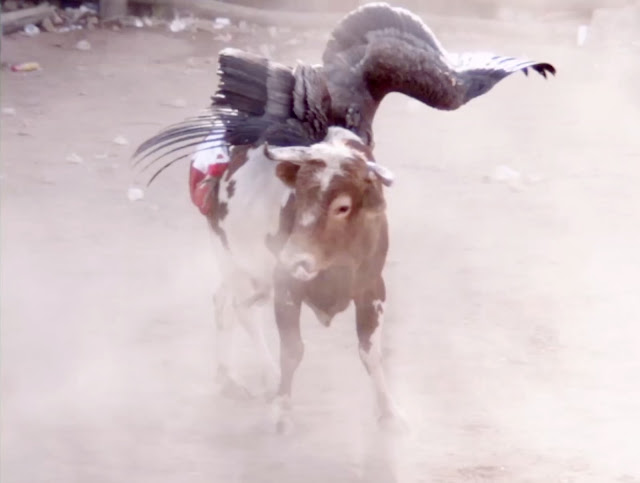 Young London-based Peruvian Ximena Garrido-Lecca makes realistic versions of objects you might find in the street in her homeland – a fountain, a gate, a wall, a fence out of oil drums - but infects them with symbolic and historical resonance (Doris Salcedo came to mind). The undertones in these ‘anthropic landscapes’ are made explicit in striking footage of the ‘Blood Festival’ from a Peruvian village: a condor is strapped to the back of a bull, and a battle ensues in which the bird pecks and the beast tries to shake it off – or its brains fatally about. According to Ximena, the odds favour the bull – but the ritual is more controlled nowadays, partly because the condor is an endangered species.


Marcus Coates develops links between human and animal worlds in a manner at once plausible and playful. This diverse survey of his unusual practice opens with a Spotted Eagle Ray, filmed as an exemplar of an ability to inhabit alternative realities which might help us to resolve inner conflicts. The show then conjures with such alternatives as the space taken up by a running wolf, translated for spiritual purposes into a surprisingly sleek plinth-like form; the artist disguised by means of shaving foam as twenty species of British moth; and a range of wild faeces charmed into bronze. It’s an enjoyable way to ponder how far we’ve come from our natural roots, and how we might seek a reconnection.

For forty years Roger Ackling born (1947) has been using a magnifying glass to burn the sun into geometric patterns on found items or pieces of wood. Thus, ritualistic process meets minimalist language to produce altered readymades which take art out of the studio to interact with the environment. The results are harmonious, surprisingly varied, and bring a certain wit to the deconstruction of objects’ original purposes, for what is of lasting use in the context of the solar time which is inscribed by the sun’s path? So Ackling starts with a boyhood game and turns it by sheer persistence into his own route to eternity.

Perversely enough, in this last show at the small and narrow Limocello space before a move to larger quarters, there are three invigilators at all times! That’s by way of a performance rather than Gagosianic security, and forms one part of a witty show made up of three sets of works which almost repeat themselves. They all play with presenting ‘meanings deprived of their original signifiers’: the locations of peppercorns in a salami which has gone; elements of public sculptures removed from their context; an erection responding to a porn film we can’t see… Tolone, by the way, is a young Italian artist, and not – as I’d thought likely – another outcrop of Ryan Gander, though I dare say there are three of him…

The Drawing Room’s spacious new premises – handily close to White Cube’s new Bermondsey outpost – allow for a comprehensive look at fifty years of the influential German Franz Erhard Walther’s drawing-driven practice. There are experiments with materials, including the striking ‘air enclosures’ between two sheets of paper; documentation and ‘instruments’ from drawing actions in the landscape; and 71 selected memories from the remarkable 524 sheet cycle ‘Dust of Stars’ (2007-09), which combines drawing and diaristic writing (translations available) to track Walther’s personal, cultural and artistic development with a winning mixture of charm and obsession.

Back in her original premises, Debbie Carslaw hosts a standing army – no reclining nudes here - of 14 life-size women, who assert themselves with considerable vim, cartoonish individuality and not a little well-aimed vulgarity against the historically male zones of the building industry (in which Aloysius has herself worked) and monumental statuary. The fun is in the wittily economical spontaneity of that deconstruction.The opening salvo, which combines concrete high heels with a cement bag head-come-cover in mocking reference to a term of abuse which might be shouted from a scaffold, seems to be heading out of the gallery to admonish any such taunters.


Thomas Ruff, a master of presenting images sourced at one remove, applies himself to the stuff of fantasy across both Gagosian spaces. Britannia Street concentrates on the science fiction standby of Mars, sourcing images from NASA and modulating colour and scale and in some cases introducing 3D effects to move them towards sculptural abstraction. The starting point in the smaller Davies Street space is Internet pornography: new additions to a long-running series which looks to build up an etymology of sexual possibilities from a source Ruff regards as more honest than artistic nude photographs, and inject them all with an unexpected beauty by manipulating the pixels. Add extracts from two other series, and you good feel for Ruff’s consistently diverse practice.

Boo Ritson: On the Way to the Ocean @ Poppy Sebire, 6 Copperfield St – Southwark

Here Boo Ritson – present as a winningly wide-eyed Plasticine avatar – is doubly brave, eschewing her signature application of paint to people and adopting the low art status medium of Photoshop, which she uses with knowingly sculptural obviousness. Continuities with her earlier work include the interplay of depth and surface and an ongoing fascination with the American Dream: we travel from dawn to dusk through a cycle of iconic western landscapes, all of which turn out to be made up from Ritson’s photographs of England. Once you realise that, it’s like walking behind a film set, giving the optimistic exploration a troubling aspect even before we happen on a snake in Eden and a Styxian finale…

On to English atmospherics: Andrew Curtis’ first show at PayneShurvell, ‘Wild England’, introduced a sinister edge to suburbia by simultaneously censoring and emphasising trees so that they took on an alien presence. His new series, ‘International Lawns’, does something related to architectural photographs by covering the windows with household enamel as if they were garage doors. Curtis also introduces a negative equivalent: exotic garden plants are left isolated as everything else in the image is voided by the intricately rhythmic accretions of black Rotring ink (which you have to see up close to appreciate), so isolating decisions of taste while negating the domestic in favour of the unknown... 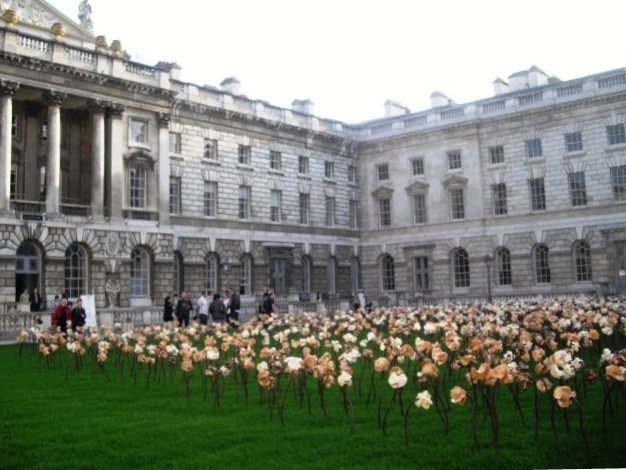 Fernando Casasempere: Out of Sync @ Somerset House, The Strand - Central

Somerset House is triply worth a visit in April. London-based Chilean Fernando Casasempere has filled the freshly-grassed courtyard of the Fountain Court with 10,000 rhythmically-spaced ceramic flowers. Their browns and creams, derived from the Atacama desert, make for an attractive and more reliable alternative to natural blooms. The Crisis Commission charity auction show for the homeless (to 22 April) is also excellent: the stand-out lots are Tracey Emin’s painted drawings of herself naked and blue, Bob and Roberta Smith’s alternative kite, and Nika Neelova’s whole room multi-parting merry-go-round of doors cast from the building’s own Georgian portals. And the excellent Mondrian – Nicholson show carries on till 20 May at the Courtauld.

Images courtesy of the the relevant galleries and artists + Franz Erhard Walther Foundation / VG-Bild-Kunst, Bonn (Walther) except Somerset House - my photo in which my wife and mother unobtrusively appear!
Posted by Paul Carey-Kent at 23:15