I'm quite often struck by coincidences as I tour the galleries. Perhaps it's the zeitgeist, perhaps it's just the logic of chance at work given how much is on. But, for example, both Sue Collis (at Seventeen) and Bedwyr Williams (at Ceri Hand) feature seashell-encrustation as perhaps the highlights of two excellent shows; my favourite up-and-coming Dutch photographer, Fleur van Dodewaard, seems to be having a 'London moment' all of a sudden - following her Beers Lambert appearance she's now in two highly recommended group shows at Brancolini Grimaldi and at Flowers East; photography in general seems to be having a moment, not just at the Tate Modern and the Barbican but more surprisingly at the National Gallery; and there seems to be the beginnings of an 'art on shelves' trend in the following. But first, an Eve and Adam of sorts...  no wonder we end up in a garden (of sorts).


Charlotte Schepke invites much of the work shown in her relaxed space just south of Pentonville Prison. Jeff McMillan, David Batchelor and Alison Turnbull's are among the juiciest of 40-odd contributions to the subject of apples ('they run through our culture like a small, firm promise in our hands' , says  AL Kennedy’s text).  There’s plenty of wit, and I particularly like David Austen's economical conflation of three myths - Adam and Eve, William Tell, and William S. Burroughs' accidental shooting of his wife in a drunken re-enactment of the second - which just catches a nervous half smile before the fatal moment.

Bjarne Melgard: A House to Die In @ ICA, Nash House, The Mall - Central

But of course! The revved-up style and discomforting subjects (stress, depression, drugs…) of the Australian-born Dutch-trained US-dwelling Norwegian Bjarne Melgaard are close enough to outsider tropes that it makes seamless sense for him to collaborate with eight untrained artists, several of  whom face problematic lives. They’ve painted over his initial work in styles inspired by his, then made sculptures inspired by the paintings and shown a burning orange mock-up interior of a house ‘to commit suicide in’, the external prototype for which is downstairs. Cue playful platypuses, parti-coloured portraits and pouting pudenda-lips.

Apparently some visitors have turned back not realising that what seems to be the door into a storeroom (awaiting the next art fair, perhaps) is actually the entrance to an immersive installation which plays off New Bond Street’s clockmaking tradition to explore time both natural (a salt ‘clock’ left to age geologically, a film set at the North Pole) and man-made (said watches). Danish artist FOS (Thomas Paulsen under a made-up corporate-sounding acronym) is interested in the effect of spatial aesthetics, and this black-curtained scenario conjures an atmosphere at the same time as juggling several themes. Fake archaeology meets problems of translation – linguistically and inter-culturally - in the 'One Language Traveller' series.

Some sort of post-disaster group therapy session is proposed by Rashid Johnson's installation 'Shelter'. Johnson covers the couches in zebra skin, upends and abuses them, burns wine on the carpet, add quotes from his visual and cultural vocabulary (mirrored shelving units as paintings, an Art Blakey record, gunsites of ambiguous directionality). He also quotes Pollock in black abstracts made from charred flooring, raised to the wall then healed and cleansed with black soap and shea butter  (a salve obtained from an African tree). All is overseen by eight pot plants among the rafters.

Matthew Darbyshire, unusually for him, includes no shelves in his installation in Anita Zabludowicz's main run of rooms.  Ru O’Connell, known for his emotionally charged mis-use of unusual materials, juggles domesticity, commerce and art in the side-chapel: he sculpturally suspends latex ‘paintings’ cast from super-fresco wallpapers with added motifs from ambient computer displays (which communicate fluctuating information, most typically on stock markets), but themselves change only with the light, interacting beautifully with the mildly-stained glass windows. Next up in the space, performance artist Leah Capaldi will be making interesting use of props (Shelves? Who knows?). 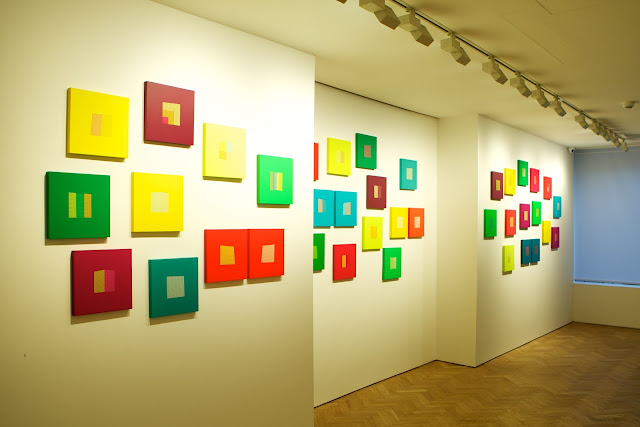 Megan Piper has the admirably unorthodox aim of supporting not the latest young discoveries, but still-developing artists with at least 40 years exhibiting experience.  This year’s lead RA Summer Show selector Tess Jaray has indeed followed a long and consistently interesting track through geometry, pattern and WG Sebald to reach these meditative yet snappy computer-aided evocations of place and mood. They use laser-cut mesh as the uppermost of two separate layers, drawing the viewer in close to peep through an intricately architectural lattice to the underlying colour it activates.  Doors, mosques and Malevich act as inspirations. 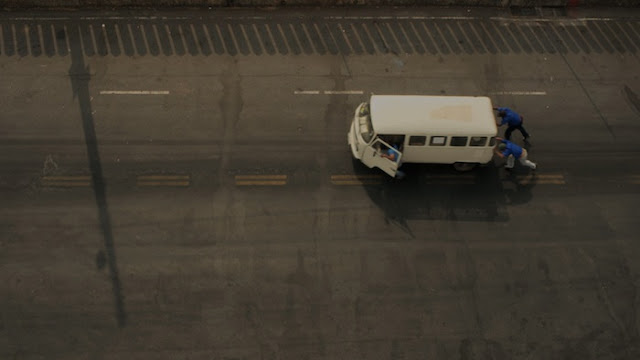 Brazilian multi-media artist Cinthia Marcelle is particularly good at making actions reverberate on a broad social scale. I loved 'The Century' (2011), in which all sorts of street objects are hurled anonymously left to right and then back from right to left. The new 7 minute ' Automobile' here has a related logic: a fixed camera monitors the flow of vehicles, and when the traffic  jams everyone  pushes - while others impatiently hoot. The stop-start nature of the traffic is captured by gaps which darken the screen, but the cacophony goes on. Night falls, and the vehicles are still using up much more effort than they are meant to save... 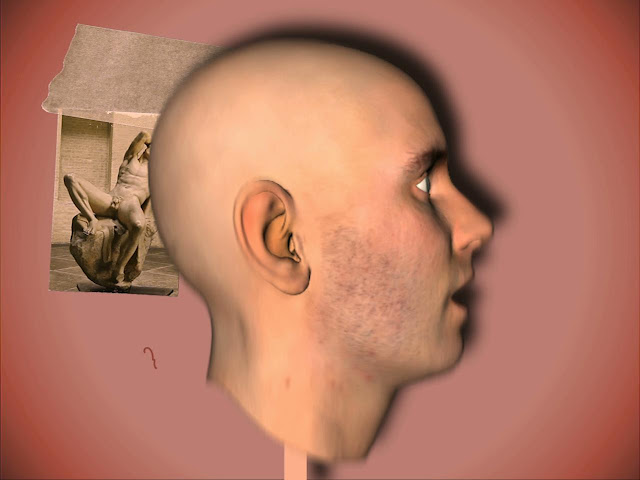 Ed Atkins: ‘Us Dead Talk Love’ at the Chisenhale Gallery, -

Ed Atkins’ clinically pungent videos combine writing worthy of separate publication with the use of stock imagery, putting all the pressure on the edit and soundtrack.  Here a cadaverous head (made with software mimicking Atkins’ own expressions to camera) seems to ask itself – across two screens – the questions it wanted to have asked a lover. The 37 minutes of dialogue, built on the memory of an eyelash trapped beneath the foreskin, range across the biology of hair; the possibility of posthumous arousal; the eyelash as a brush to draw itself; and the foreskin as a tomb. Think Vito Acconci meets Laurie Anderson, all in a laptop. 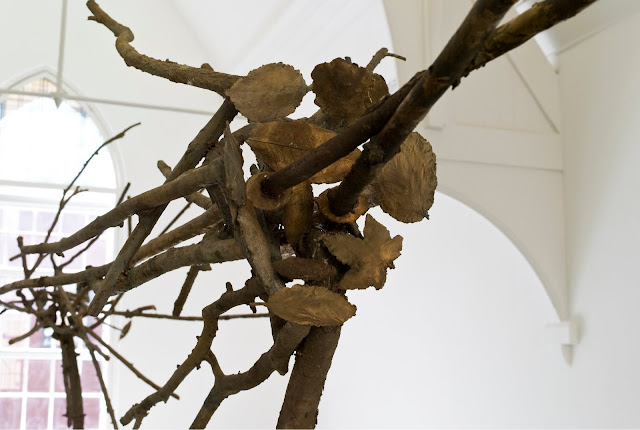 If spring was the season of Alighierro Boetti (five London shows), autumn looks like the turn of his Arte Povera confrere Guiseppe Penone – and none the worse for that! Haunch of Venison has provided a drawn warm-up to the Whitechapel’s year-long commission and Gagosian’s perfect small gallery showing. You can see it all from outside, but that would be to miss the way the branches at the end of the tree form coalesce into faces with branch-ray vision in dialogue with the large eyes made from thorns as Penone carries forward his patent play between light-nourished tree growth and our light-enabled perception thereof.

The bigger Gagosian has a splendid Franz West memorial, but the latest phase of Sarah Lucas’ year-round curation of a room above the main Sadie Coles space – itself the most innovative gallery model of the year - catches his spirit even better. It combines classic West with Lucas’ own work (including cigarette portraits of her Austrian friend and Gary Hume posing for updates of the naked-with-genital-cover photos from 20 years ago), a film of the two in conversation no less interesting for being silent (you can take that two ways, and both apply) and an unfinished sculpture by West which was ‘completed’  à la Lucas by her applying to it a fried egg found in his studio. 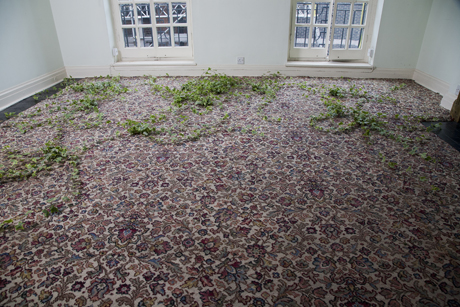 The Delfina Foundation has acquired the house next to its present premises and  allowed the Toronto-based Iranian artist Abbas Akhavan the run of it before it’s gutted. Akhavan has seized the chance to move the garden inside: trees, waterfalls, soil, ivy growing through the carpet, a leak make for atmospheric barriers to visitors and set up conversations with original features such as floral wallpaper. Careful examination reveals, though, not only that those features are by no means as naturally installed as might appear, but also that they’re charged with echoes of political violence.