London’s art scene is too rich to take in at the moment: you can go historically for high quality surveys of the Ice Age (British Museum) to Barocci (National Gallery), Murillo (Dulwich & the Wallace Collection),  Manet (Royal Academy), the Newlyn School (Two Temple Place), early Picasso (Courtald), Schwitters (Tate Britain), Morandi (Estorick), Man Ray (NPG), Ansel Adams (Greenwich), Elizabeth Frink (pretty comprehensive even if Outer London, you might say, in Woking), Bruce Nauman (Hauser & Wirth), Rosemary Trockel (Serpentine) and Gerard Byrne (Whitechapel), not to mention the big shows I’ve picked below. I'd add Byrne to Kelly Richardson (Edel Assanti and the Towner, Eastbourne), Shaun Gladwell (de la warr Bexhill - how big can London get?), Lichtenstein, Kolářová and The Barbican as my must-see retrospectives, the first three of which I'm writing about elsewhere - for Border Crossings, Photomonitor and Art Monthly.  But there is as ever plenty worth seeing in smaller galleries, too, several of which explore space to considerable effect…  Richardson's half-real half-virtual spaces are at one with that theme.

Thirteen new large format photographs of interiors body best-known female representative of the see her in central and southern . I was inclined to carp: why always the same approach? Does she do enough to transform her material? But in practice, the way which Höfer captures space - physical historical and social – carries an ongoing charge. You might call that spatial volume the negative outcome of the constructions which surround it – and here those definitional surrounds, as in the theatre in Mantua above, are of celebratory magnificence and call up the drama of the Renaissance. 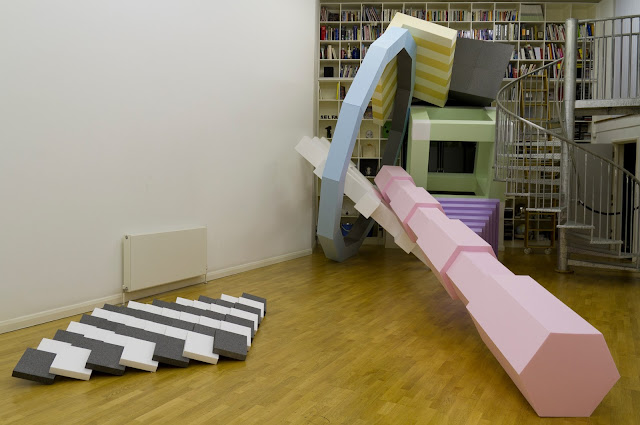 The Berlin based Dane Tommy Støckel (say Stir-kle) has come up with a  curiously satisfying chance driven means of engaging with this specific, somewhat unusual, docklands space and the international space to be traversed between him and it. He made 10 models of polystyrene forms, placed them uniformly in packing cases, and courriered them to . We can see the 10 cases with their travel-jumbled contents at the back of the gallery - and pick out the one arrangement chosen to be made big enough to fill whole room and apparently wish to escape through one wall.

In contrast to Støckel's space invasion, this whole show takes up about two square feet of the three large walls it is spread around. Edinburgh-based Paul Chiappe is known for his fantastically detailed spray gun and pencil versions of found photographs, and this show gives you that. Or rather, it gives you just the one photograph of a school's line-up, in four paired versions, all of them both editing from and adding to the original. The figures included vary from 11 to 27, and within each pair one can search for subtler differences in, say, socks or eyebrows: a kind of memory game to slow the photographic passage of time.

This bracingly unegotistical and superbly organised show of over 200 items takes us from Cabinet of curiosities to library to white cube space to Natural History Museum to design display. It brings the protean German Rosemarie Trockel into dialogue with self-taught artists: for example, Judith Scott's way of wrapping objects in wool resonates with Trockel's own best-known stream of work, her knitted "paintings". One can also trace such themes as chimpanzees, the independent leg, or the unusual use of ceramics; or note the move from a spider which replaces the pubic hair on a version of Courbet’s ‘Origin of the World’ to fly on the face of a baby... 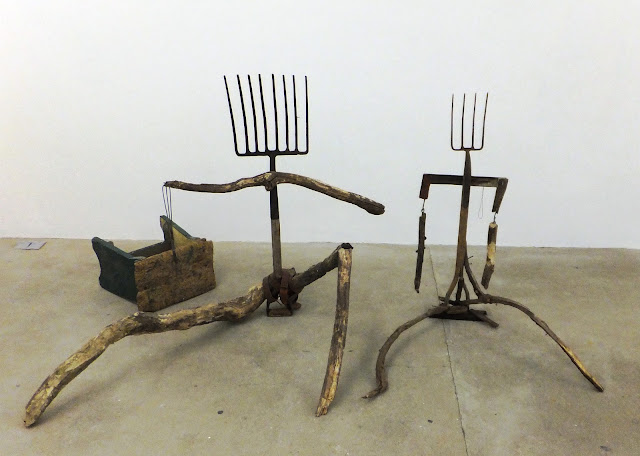 Just when he seemed to be boxed into a never-ending sequence of rooms,  In what amounts to a reversal was established practice, Mike Nelson's fourth solo show at Matt's Gallery seizing move away from constrained spaces full of empty menace to an open spread of a Trockelesque number of rudimentary and abject sculptural formations: you wander among figures out of branches and garden forks; bin accumulations; flopped costume bodies; tripod votives; giant plaster heads; campfire stick patterns; ram's horns etc. The atmospheric results mixes folk magic with outsider camp with a sense of memorial.


Ascending to Rob Chavasse’s impressively varied yet coherent first London solo show, you fear the worst from an auto-tuned sound installation of wind – but are soon drawn to a sleek black abstract which turns out to be a high tech and rather welcome radiator posing as a painting. Chavasse continues the weather theme by covering a window with the results of allowing rain to fall onto a scanner, and complements that with an indoor version of sorts: a monotype made by unrolling a canvas over the floor after a party in which many drinks were spilt. Add an abandoned petrol station and a cloudy Bigfoot captured in a mirror, and ponder.


The newish secondary market space Modern Collections has done well to bring no fewer than 19 of Keith Coventry’s iconic 1990’s ‘Estate Paintings’ together. They’re deft flip-flops between the gritty reality of  council estates (the signage maps from which they depict)  and the modernist idealism of Malevich (whose Suprematist visual language they adopt). But is it that simple? The white backgrounds (or are they foregrounds?) swirl with more painterly affectation than one would expect, whereas the buildings are flat and inert. Most striking are two which merge the series with ’s equally characteristic white-on-white paintings. The reason? One step on from Chavasse's petrol station, the Stonebridge Estate and  had been demolished.

Cosmetics as art? The affixment of razors? Documentation of children's games? Not Karla Black, Damien Hirst or Francis Alÿs, but the fascinating Czech artist  Běla Kolářová (1923 - 2010) ahead of them all. Not only does this 150 work retrospective introduce her to British audiences, it comes with the most handsome free exhibition guide I can recall. The domestically-scaled works range from photographs made from artificial negatives to direct arrangements of such signature materials as paperclips, pen nibs and snap fasteners. Kolářová's underlying themes are movement between part and whole, and a focus on the marginalised - both of which it's possible to read as quiet protests given her political context.

This brilliant presentation of Lichtenstein's explorations of the nature of representation gives us the classics: cartoons, brush strokes, riffs on the masters, mirrors, this hinged cartoon sequence of hinged bins. But its themed rooms prove that Lichtenstein's lesser-known series are also shot through with jazzy imagination and wit: the black and white still lives; art deco sculptures; Chinese landscapes; see-through two-dimensional faces; entablatures; theatrical studios with self appropriation; perfect and imperfect abstracts. Plus, of course, plenty of dots - but including those that aren't round / vary in size within the painting / escape the logic of outline / are magnified / get mixed up with stripes.…..

Robert Rauschenberg: Jammers @ Gagosian Gallery, 6 to 24 Britannia Street - Kings Cross and in 'The Bride and the Bachelors: Duchamp with Cage, Cunningham, Rauschenberg and Johns' at the Barbican

It’s good to see plenty of Rauschenberg in the Barbican's atmospherically interdisciplinary Duchamp-themed show plus an expansive overview of his airy 1970s series which take easeful pleasure in coloured fabrics hung from rattan poles. The Jammers emerged from visits to India and take their name from a type sailing boat. Everyone knows Rauschenberg's early white Cage-influencing paintings, his combines and his transfer image collages but substantial other bodies of work keep emerging: the cardboards, the gluts, the paintings on metal, the Moroccan collages, the sound pieces, the stage sets, the photographs.... He's been dead for five years, but I still find myself wondering: what next?

Photos courtesy of the relevant galleries and artists plus Coventry 'Courtesy Private Collection, London via Modern Collections'
Posted by Paul Carey-Kent at 04:28