(as written for and currently published in STATE magazine - www.state-media.com)

London's art calendar may seem crowded, but since the demise of Zoo, which used to run simultaneously with Frieze, the latter has been London's only substantially-sized, pluralistic, internationally-focused fair. That's actually quite a contrast to the multiple satellites around the main fair is in Basel, New York or Miami.

Either way, the first edition of Art13 (1-3 March, sponsored by Citibank) had a positive vibe, especially on the opening night when 6,000 attended. Olympia's iron-framed, high-roofed Victorian Grand Hall provided an airy context with attractive natural lighting – indeed, several people suggested to me it was the finest artwork on view. The layout was spacious, with judicious use of 22 mostly sculptural and mostly excellent special projects to punctuate the Gallery Booths. Some spirited performances took place against Bedryr Williams' backdrop: an historic scene which showed a crowd ready to witness a hanging, complete with a woman hawking ghoulish souvenirs. Any coincidence with the art fair business was as cheekily deliberate as the Welshman tends to be.


There were talks on international trends, and an impressive London-wide program for collectors. Things ran smoothly, consistent with the organisers having already had a hit with last year’s art .   The 128 galleries from 29 countries were refreshingly different, with no galleries in common with the last  edition of Frieze. That's another way of saying that the critical and commercial heavy hitters were absent. Perhaps that was always likely, but the timing - close to the big  fairs - made it inevitable, and the  was comparatively under-represented. There were several galleries in common with January’s London Art Fair. That, however, is primarily domestic whereas the key here was that around half of the artists showing were non-Western, making it much more globally representative than Frieze itself.


That was a deliberate mission, which translated into numerically strong representation from Asia in particular, and played neatly into the programmes of  galleries specialising in the Far East (Hua, Rossi & Rossi, Selma Feriani) or  (Jack Bell, October) as well as visiting galleries. There was also a broad spread across different market sectors: alternative spaces, mainstream contemporary, second market galleries, editions, a smattering of street art. There were separate sections of young galleries (less than six years old) and galleries showing in  for the first time; and prices covered a wider range than at the established major fairs. The only absence, by and large, was video.

But, to cut to the chase, was the art any good? The quality was variable, to be sure, but for every booth which encouraged me to move on quickly, there was another which drew me in. Some patchiness is probably inevitable if such a novel mix is to be achieved, but there were, for example, good displays from some of London's more adventurous smaller galleries (such as IMT, Maria Stenfors, Riflemaker, DOMOBAAL,  Man & Eve, Ceri Hand, Salon Vert, Hidde van Seggelen and FOLD).

Was it a commercial success? Most galleries I spoke to said that sales had exceeded expectations, and all said that the organisers had made a good job of bringing collectors to the fair. Overall, then, Art13 is hardly a competitor to Frieze, but it does complement it, and it seems to be off to a successful enough start to look to next year with some confidence.


It wasn’t difficult to generate examples of interesting work by nine artists who have shown little if at all in London before – plus more familiar imposters from Newcastle via Scotland who I’ve allowed as my pick of the multiples. 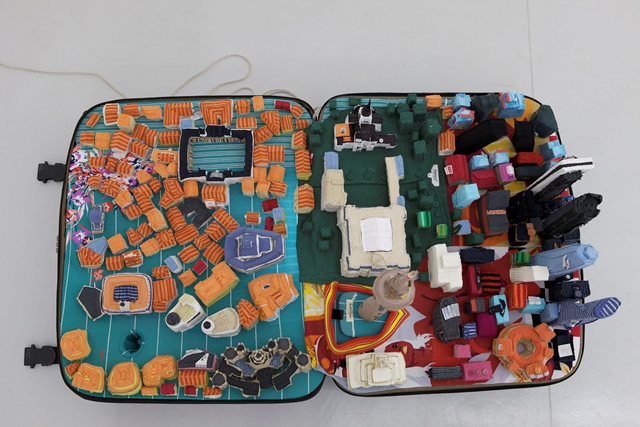 No doubt the travel associated with an international art career can be a distraction,  but China’s Yin Xiuzhen has made the most of it with a series of cities in a suitcase: she asks the relevant show’s curators to iv her some of their clothes, and turns them into her next destination’s architecture. Here, Madrid. 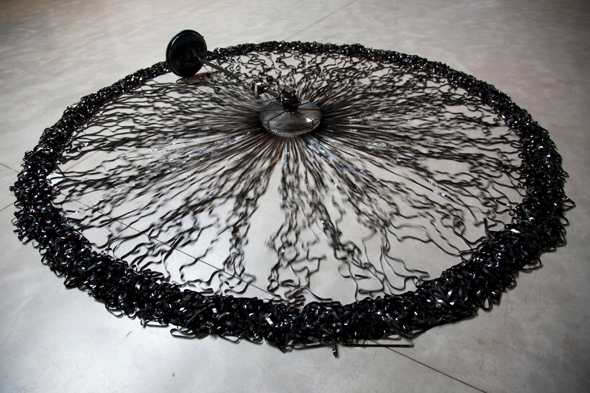 Lithuanian Žilvinas Kempinas’ signature material is unwound magnetic tape, which he has previously caused to dance unsupported save by the pressure of air currents Here a fan makes the tape ripple and rustle in mesmerising mimicry of both the sound and the look of running water.

Swiss artist Pierre-Alain Münger  explores destructive forces. This, described as 'car on metal', may be the ultimate action painting: it provides a surprisingly clear impression of what happened when face 3 (ie the front) of a white Jaguar impacted at over 100 kph into a sheet of green metal set up at the end of a crash test track.


Szilárd Cseke: Change of the System, 2013 at the Ani Molnár Gallery (Budapest) 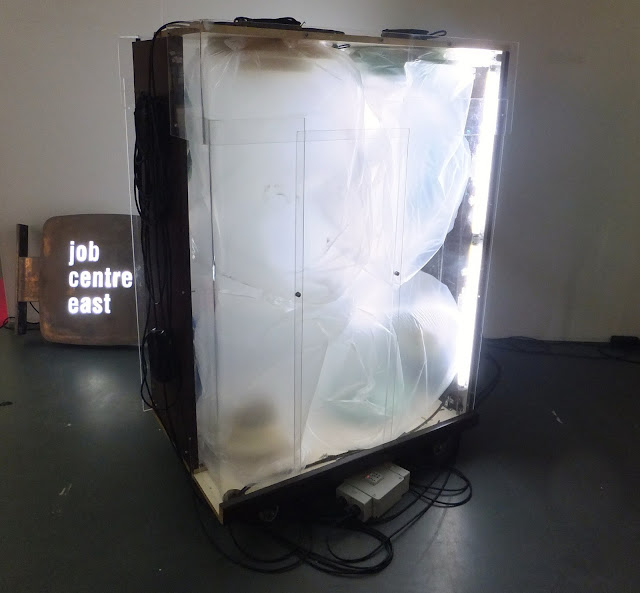 Szilárd Cseke maps the post-socialist situation in , here by altering the British Job Centre signage to comment on the emigration-driven lifestyle of many of his fellow East Europeans, and by setting up plastic bags to fill, empty and rotate as air is blown in or sucked out of them to represent the ramshackle volatility of the Hungarian political systems. 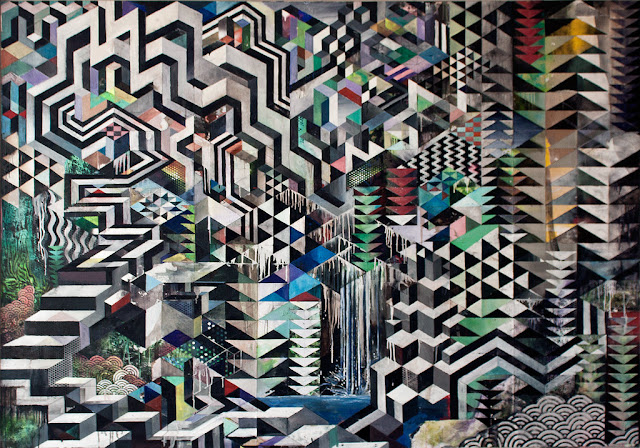 Every fair I attend contains a persuasive German painter I didn’t know, and here it was the unteutonic-sounding Michael Conrads. Geometry is overtaken by Mexican landscape elements in the multiple paths, perspectives and references of this absorbingly complex  three metre canvas. 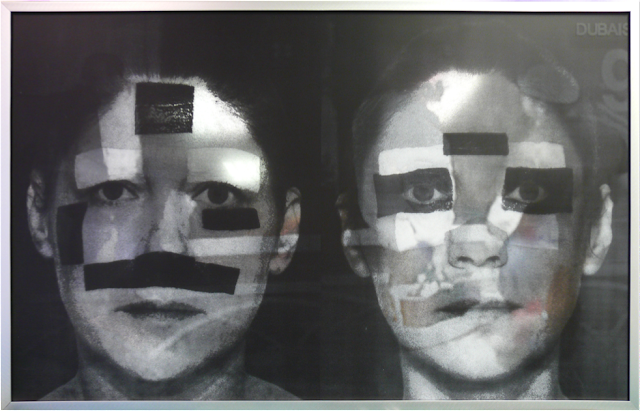 This screen print on mirrored acrylic uses CCTV footage of the assassination of a Hamas operative in a Dubai hotel room, over which the artists appear with dazzle camouflage designed to scramble the technology used by police for digital face recognition: troubling, primitive, haunting, mysterious. 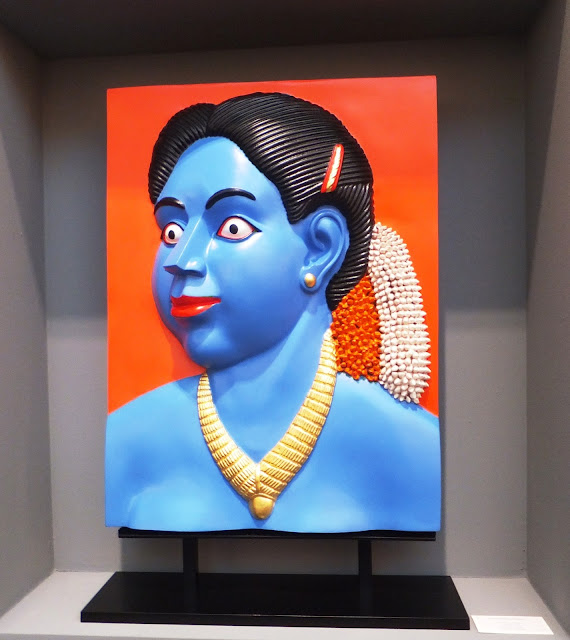 Indian artist Ravinder Reddy’s work tends to be described as ‘Pop goes Hindu’ for its melding of the archaic with a modern, wide-eyed directness and sensuality. Here that came in three uplifting permutations of the same four colours in what turned out to be polychrome bronze rather than his more usual fibreglass. 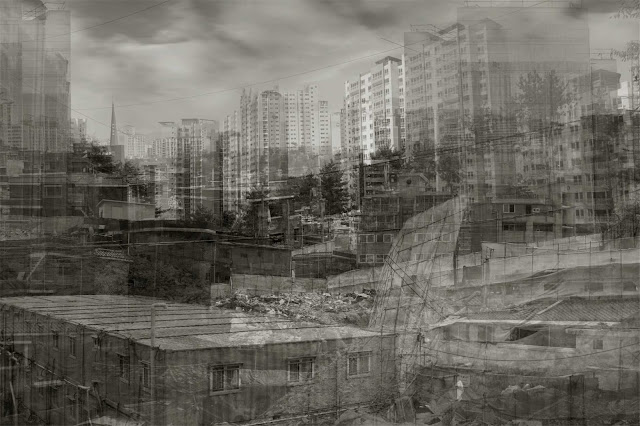 The Fair’s high quotient of Koreans included this impressively patient means of arriving at Idris Khan’s multi-photo look: Jae Yong Rhee photographed the same site over two decades in which rickety slums were replaced by high rises, then layered the times over each other.

Fabian Marcaccio: This Just In Paintant, 2009 , at Jerome Zodo (Milan) 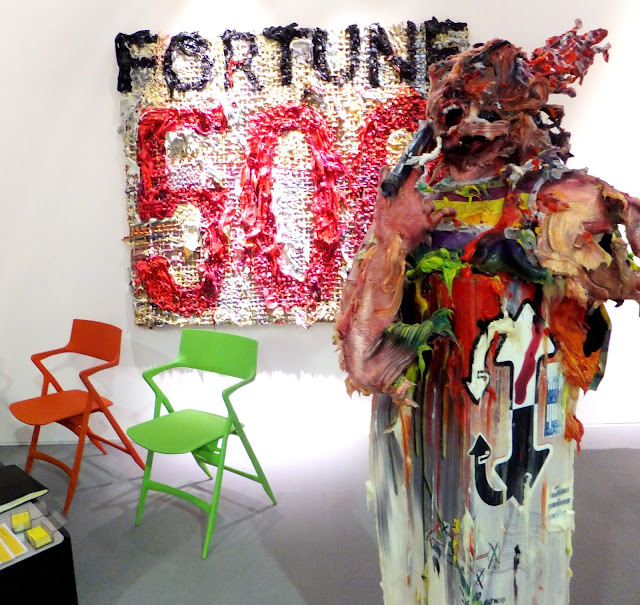 Philosophically trained  based Argentinian Fabian Marcaccio says he’s trying to show that the code of painting ‘itself is in metastasis’.  That translates to luridly painted environments for the internet age which push the use of silicone and acrylic on canvas to such an extreme that they form a self-standing structure.  His Italian gallery  dramatically matched an apparent suicide in process (not the death of painting again?) to  a wall piece referencing the stock market. 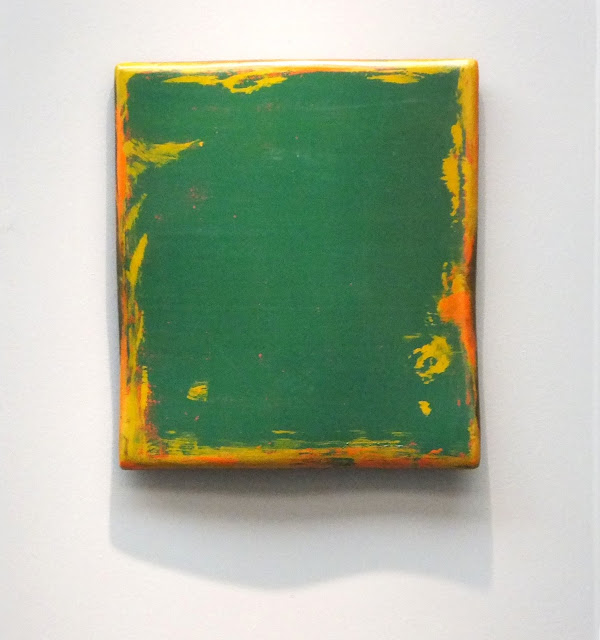 Su Xiaobai (born Wuhan, 1949) studied with Richter and has lived in Germany since 1992 – but has a particular fondness for the traditional furniture finish of Chinese lacquer, which he applies to modernist effect on supports with a convexity which make their physicality manifest – the title means ‘plastering’ – and cast a shadow at one with their spiritual undertone.