Christmas, I hear, is coming. I’m tempted to ignore it on the basis that biennially would be quite enough, but maybe it’s the odd years it should fall in…. so I’ve even kicked off above with a Xmas card of sorts, one of several thoughtfully intuitive paintings made on cut-up bits of another bigger painting in Jost Münster’s show at Tintype – which, aside from looking ahead to the next one, isn’t conspicuously seasonal. Given that Father Christmas used to be dressed in green, might there not be an era at some point for the red tree? I kick off with two shows located in shops suitable for the acquisition of art and non-art gifts, followed by another rare location. And it's an indication of how fast things move around that I've featured none of the first six spaces in their current locations before... 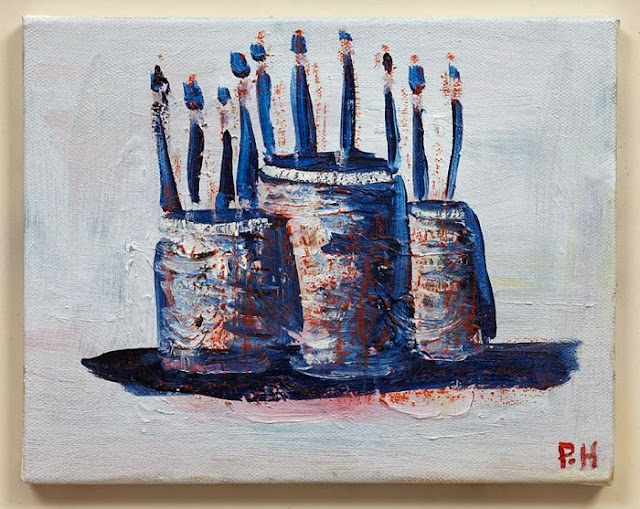 This, described as ‘an idiosyncratic overview of the artist’s work from the past 18 years’, is indeed a curious but stimulating mix - even before you get to the jewellery shop setting of Belmacz: mid-nineties cartoonish additions to pre-existing images and a thoroughly nailed teddy bear (what would Grayson Perry say?) are followed by a long gap to Housley’s recent plays on the art of painting (Is it like building a house of cards? Are the results always self-portraits? Even if they take off from Picasso?). And something faintly seasonal about these brushes as flowers as candles rather appealed to me…

And now for something completely different… Not the Monty Python reunion, but a chance to see contemporary photography in the super-plush setting of the palace built as the London residence of the Bishop of Ely in 1772 and unaltered since. It’s resplendent with Mallett’s antiques and high end modern design, installed as if in a dwelling, and now with the bonus of a substantial room-each showing from seven of the Jules Wright / Wapping Bankside’s photographers. Three suit the 18th century setting especially well: Peter Marlow’s full set of 42 Anglican cathedrals by echo;  Edgar Martins’ Cosmonaut Training shots by counterpoint; and Dutch photographer Jacqueline Hassink’s measured views out of windows into Japanese gardens by parallel escape from the modern world. 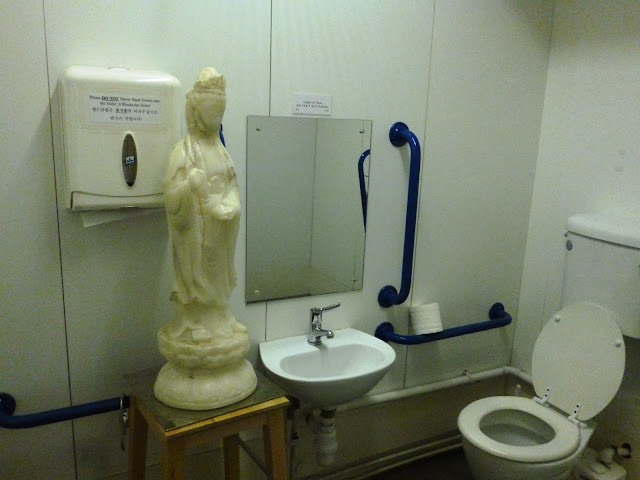 Bodily functions are all over contemporary art, but how many shows do you go to at which visiting the loo is a major part of the art experience?  All three toilets in Meekyoung Shin’s all-soap retrospective contain Buddhas made of soap on which you're invited to wash your hands.  The main space has examples which have been exposed to such treatment in various museums for a few months each, to varying age-evocative effects, the most severe citizens being the Brummies who rubbed away the whole head. Interesting, and part of a large and impressive - though rather shoddily-installed - retrospective.

Katy Moran’s third solo with Modern Art sees her use an impressive variety of collage modes out of and into which her distinctive painterly language goes back and forth with something of cubism’s alternation between thought and play. Different works feature thick accretions of cultural scraps,  like an art history notice board put through a shredder; painting over found paintings, one with its frame framed anew; multiple layers piled into sculptural effect; and cut-ups of canvas used as spatially complex sites for mark-making. Add titles which teasingly hint at what we might see, and you have fascinating set of proposals to explore.
_______________________________ 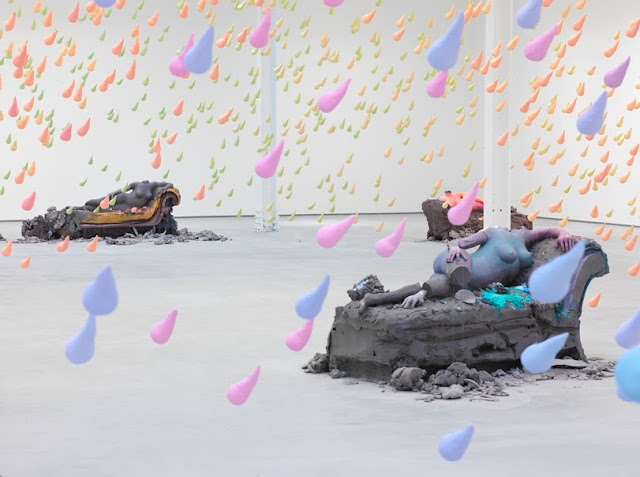 Urs Fischer? At the level of individual works, I’m not so sure. But he’s a master of the total show installation, and sure enough he makes the most of the wide open opportunity to bring fairytale surrealism at scale to Sadie Coles’ newly-acquired former dancehall space. There are really only two works: several versions of the same reclining clay figure, in various states of decay as if they’re stages of his self-melting candle sculptures; and a veritable rainbow 'Melodrama' of 3,000 big fat ceramic water drops / icing drips / pears / commas in colour-coded sectors of blue, green, purple and pink.
_______________________________

Two crisply baffling strands of Marcel Broodthaers’ (say BROT-hairs) influential practice when it’s decades since London had even one? This combination of brickworks downstairs (seriality in multiple registers of fake, real and both) with a two room guns ‘n’ leisure environment upstairs has to be seen. File the latter, a version of Broodthaers’ exhibition at the ICA in 1975, alongside the recreation of 1969’s ‘When Attitudes Become Form’ under the growing business of  revisiting shows past. Curious fact: Broodthaers and Shakespeare both died on their 52nd birthday.

More pep in your pop with this revelatory show of the little-known Jerzy ‘Jurry’ Zieliński  (1943-1980).  His sharply delineated combinations of Communist, graphic and Pop iconographies include, for example, plenty of full lips, but differ from American treatments:  the colours are darker, the presentation not quite sleek (partly the effect of what materials were available in 70’s Poland) and political ambiguity is always close, potentially critical but with a sense of anticipating future nostalgia.  Does ‘Hot’ show an abstracted pattern of flames, or a protester who set himself on fire? Is the ‘XXX’ on those lips a celebration of the regime’s 30th birthday, or a stitching over of free speech?

What’s this? We’re fairly used to the humble’s homages to the famous, but here such luminaries as Miroslaw Balka, Jean-Luc Moulène and Tonico Lemos Auad put forward their own works as tributes designed to resonate with those of an artist of whom you may know nothing: Trevor Shearer (1958-2013) was an influential teacher but chose to show his own work very little. Yet it fully justifies his company: whether casting a basin from graph paper filming the hop, skip and vanish of a water drop on a hot plate; or pulling off the sculptural trick of seeming to hide behind the wall, his work is subtle, grounded and precise.


Anna Barriball (stress the first syllable) keeps finding direct ways to capture doors, windows and walls with a direct literalness which somehow effects a paradoxical denial of their essential functions. Here frottage drawings are floated on fluorescent backings; images taken looking out at night make for a colourful shadowplay of video windows; silence turns to image as a pencil is poked through acoustic tiles; and, best of all, inked glass is floated in water and pressed against paper to yield a photogram-like impression of a rain-swept series of 'Night Windows'.


Boris Groys’ eponymous essay claims the video loop as prime exemplar of how the only contemporary infinity, after God, lies in the  repetition through which art can be ‘with time’ – its comrade – rather than ‘in time’. I couldn’t readily connect that to this film-free show, but there does seem to be an interesting double deconstruction of the media of art (made abject) and of the self (made elusive) in such works as Nikolas Gambaroff’s latex casts of his own paintings; Wade Guyton’s cross (the self as voter in a digital print pushed so hard it breaks into the painterly); and Magali Reus’  use of three ceramic bus seats, one flesh coloured, the other two newly wrapped in plastic, to say something about the self and something about colourfield abstraction.

The Edge of Painting @ The Piper Gallery, 18 Newman St – Fitzrovia
To 30 Dec: www.thepipergallery.com


The Piper Gallery’s refreshing USP has been that it features only artists who’ve had a 40+ year career and are still active, which makes them all at least twice as old as Megan Piper herself.  Here curator Tess  Jaray qualifies, but her inventive choice of work which relates to painting without fitting its traditional definitions includes such whippersnappers as Martin Creed and Rana Begum as well as rule-compliant John Stezaker and Tim Head. I like Support, in which young Onya McCausland polishes away the wall to make a fake shadow which, as I read her title, could be holding up an off-kilter chalk-covered McCrackenesque plank just as that form could be holding up the wall.
_______________________________

The Lisson Gallery is already looking back from the vantage point of its 50th anniversary in 2017. Some high quality (notably Cragg, Floyer, Wentworth) and the pairing of early and late works from each artist lift ‘Nostalgic For the Future’ well above a routine group show of gallery artists, but the main reason to visit is the basement, turned over in full to Haroon Mirza’s composition ‘Preoccupied Waveforms’: electro-percussion; TV as instrument; acoustic barriers as sculpture; and an abstract light-work, fan-blown through a smashed-through wall. These merge to make a mesmerising cyclic environment suggesting how, just as systems are broken down, they can come together afresh.

This one week pop-up is the first solo show here for Spanish painter Francisco Nicholas, who arrived in London last year. His English is still a little scratchy, but the paintings generate moody atmospherics and a sense of enquiry, as Nicolas pitches the potential realities of painting and geometry into colourfully layered dialogues – obscuring, tinting and heightening each other in what could pass for Ben Nicholson meeting Rene Magritte. Sometimes he integrates a photographic element, too, as in Filter on Reality with its painted sky and digital sea. Oddly, he says, his palette has brightened since he swapped Iberian sun-shine for British cloud-gloom.