Saturday 26 April 2015 proved an interesting one as there was an unusual variety of art events on in London: 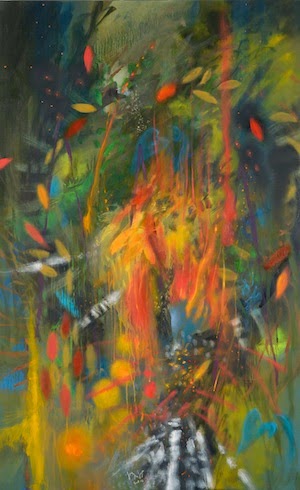 Carlos Jacanamijoy: Nacido en el fuego, 2008-13, oil on canvas, 200x124cm  Born in Fire
First I visited Sandra Higgins in the Kensington flat she uses as a gallery (open by appointment) to carry forward her campaign to achieve recognition for artists discovered on her regular trips to Colombia. Carlos Jacanamijoy (those ‘j’s are pronounced as ‘h’s) is famous enough in Bogotá to be widely recognised in the street. One of only 4% - a persecuted minority -  who are of native blood, Jacanamijoy is the son of a shaman, but also trained in the traditions of western painting. Exploiting that unusual combination, he reflects the jungle and his Inga heritage through burningly bright abstracted numinous places in which a range of personal symbols of his own devising refer to such matters as social relations, the local fauna, and the hallucinogenic drugs experiences caused by the psychotropic yajé vine in tribal ceremonies. He deserves a higher European profile.


To the London Original Print Fair at the Royal Academy, which alternated old and new to somewhat dizzying effect, but contained a fair proportion of good material as well as such counter-titular absurdities as Eric Ravilious prints made in 2014. Three – oddly enough all abstract - works which caught my eye more positively were: 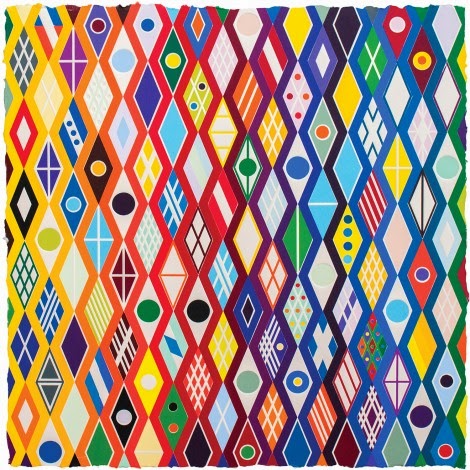 Emperor Twist, 2015 Woodblock 64.5 × 64.5 cm, Edition of 35
Pennsylvania-based Durham Press’s Brand new Polly Apfelbaum woodprints, dizzyingly heraldic grids made from scores of individual diamond blocks, which take their zingy inspiration from the mosaics she saw during a one year residency in Rome. It's no surprise that colour takes a central role, though the American artist is best known for using it on less orthodox bases than paper. 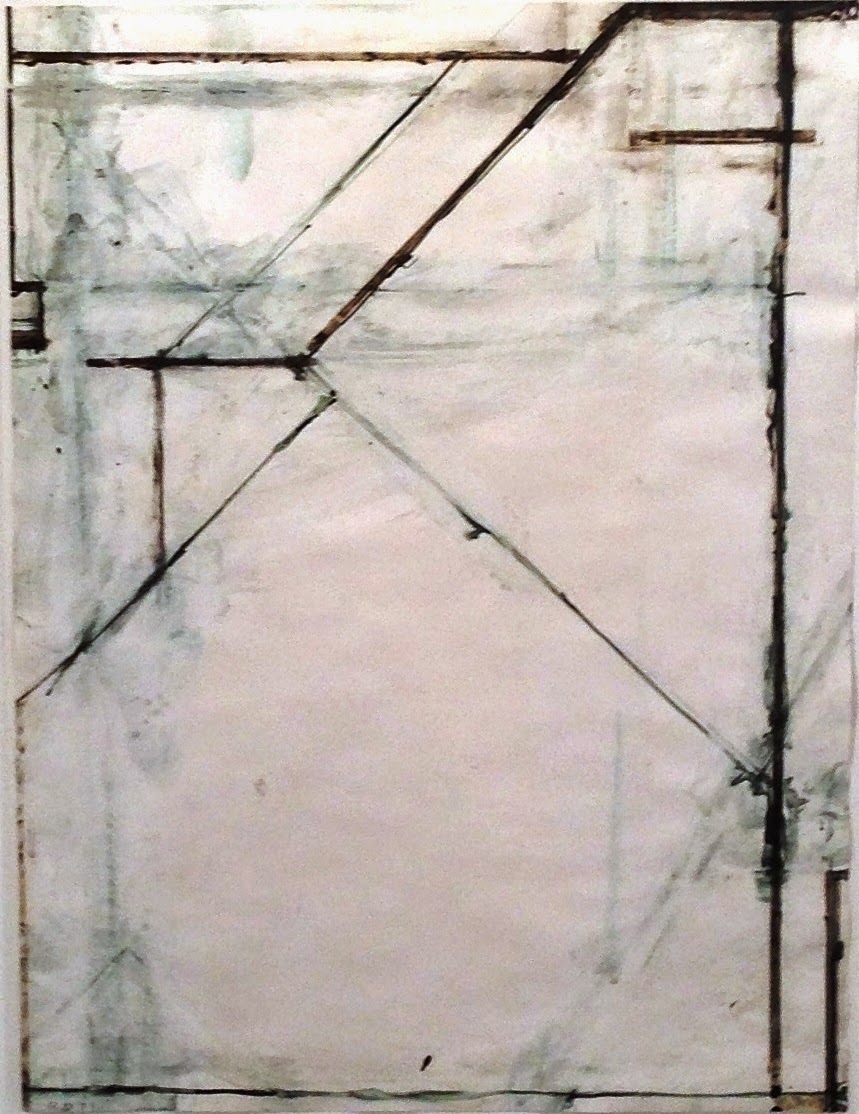 Richard Diebenkorn: Untitled (1971–76) watercolour at Emanuel von Baeyer
The Richard Diebenkorn survey is still in the Sackler Rooms above the Print Fair, as I was reminded by this typical late work on paper: not a study for the Ocean Park series – Diebenkorn never worked from sketches – but an exploration of the same structures in a different way, and like the paintings in demonstrating its hesitations and uncertainties as the artist seeks to make it work. Not, though, particularly cheap at £300,000. 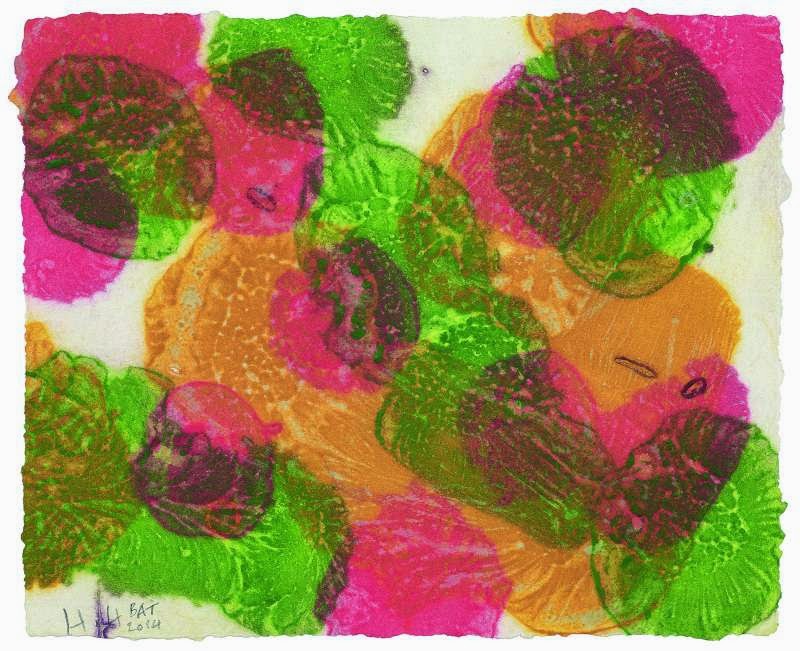 I don’t claim to be a devotee of Howard Hodgkin’s mainstream output, and have had enough of his false framing device. But I was drawn to the lighter and more open composition of his recent near-floral carbondarum prints. The oriental echoes are no surprise, but I was reminded of a recent conversation in which I’d been assured that the Japanese cherry blossom season is no better than the English one, just better celebrated. 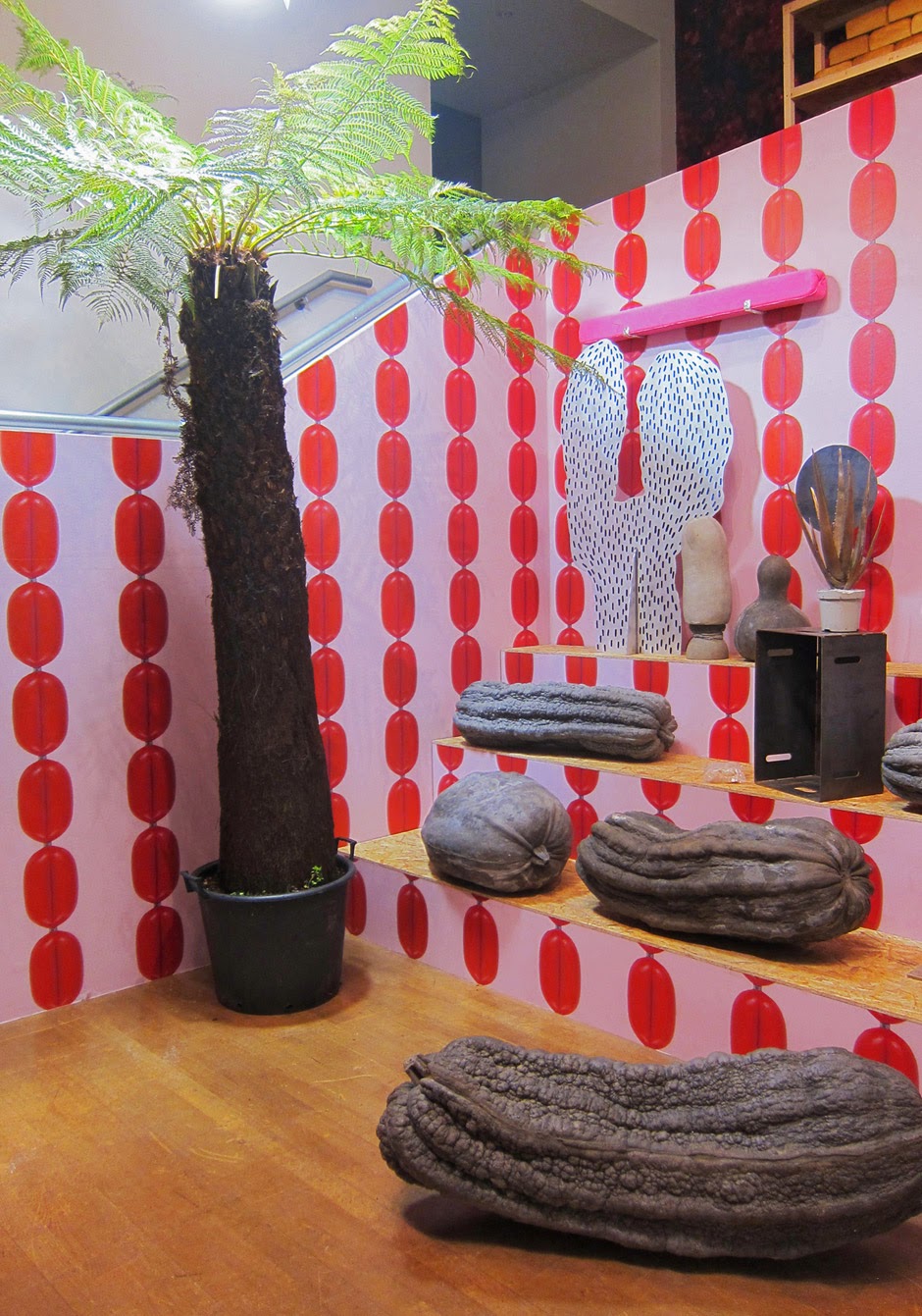 Jonathan Trayte: The Shopper's Guide at the Royal Academy of Arts
The Dazed and Confused emerging artists award round the back of the Royal Academy is well worth catching. Five finalists were selected from 1,700 entries, and given that they received only £1000 each, their whole room installations are immensely impressive. That shows the energy of the artists - who had to be under 35, not in education and not represented by a gallery – not just in making work but in obtaining additional sponsorship. Lawrence Lek's striking animation, in which  the viewer takes the controls of a helicopter hovering over the the Royal Academy reimagined as a luxury housing development, is a worthy winner, but the judges choice must have been difficult and there's plenty to be said for two critiques of consumerism: Rachel Pimm turns the rubber industry into a version of ‘the way things go’, and Jonathan Trayte's 'Shopper's Guide' is an astounding compendium of bronze and ceramic – but not, I think, rubber – food: what’s the use / value assessment of that?


The Other Art Fair in Bloomsbury gives 130 unrepresented artists the chance to present their own work, independent of the gallery system. Gavin Turk guested entertainingly, and Alan Rankle, painter of corroded landscapes, was by a distance the most established (and expensive) artist to take part in the orthodox manner. A handful of others grabbed my attention: Lanee Bladbjerg, Barbara Nati, xxxx and the following three – all representational this time in the face of quite a lot of over-generic abstraction as well as plenty of dire figuration: 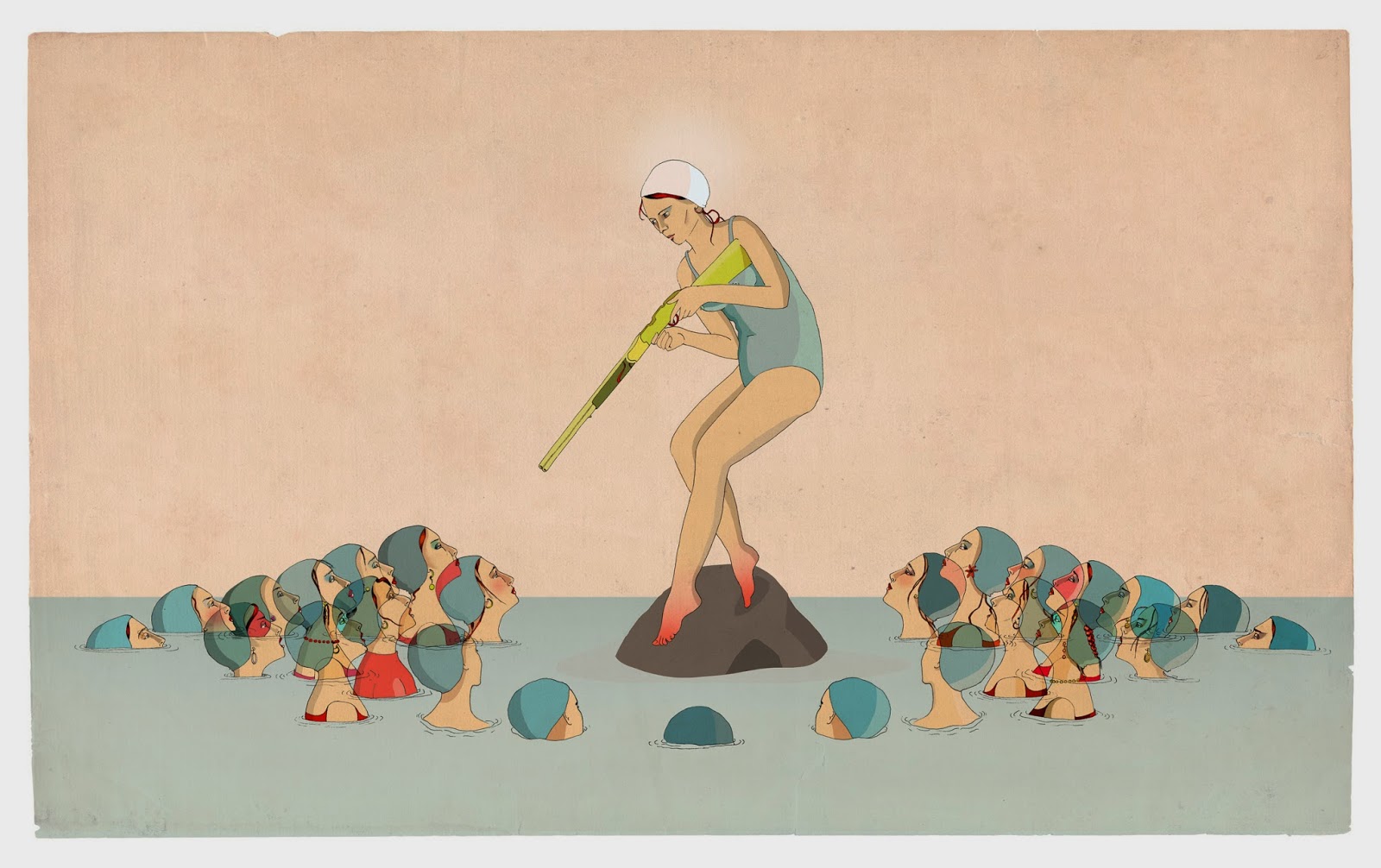 
The spirit of Cananda’s Royal Art Lodge (Marcel Dzama et al) seems to coarse through the hauntingly precise scenarios of Delphine Lebourgeois. She’s as French as she sounds but has lived in London for a decade. Women with guns provide her favourite means of playing with power relations, and also between illustrative and fine art traditions... 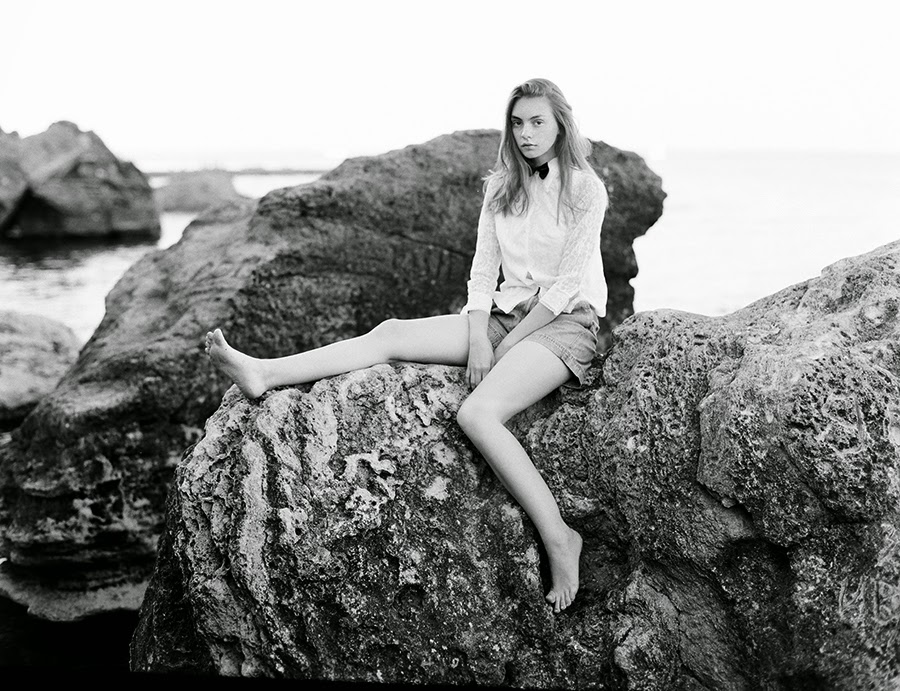 Russian photographer Anastasiya Lazurenko has a naturally contrary, convincing casual style which reminded me of Boris Michhailov, and like him she records the weird characters around her with an attractive lack of judgment to make us see them differently through her. She included a sequnce dedicated to a 'charismatic fairy alien' who died of anorexia under the sex / drug / heaven title 'Pearly Gates' 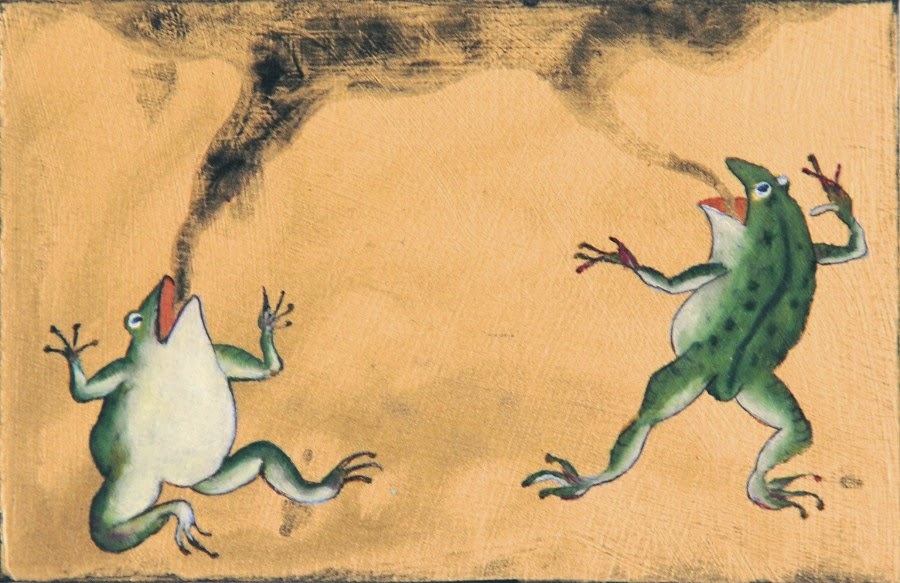 Rui Matsunago’s small paintings are skewed versions of Japanese fairy tales which channel an entertaining animalism against gold backgrounds which set up unusual colour relationships. Frogs, representing the Rain Spirit, are particularly charaterful: these two seem to be making a dark cloud which promises plentiful precipitate - or is it paradoxical smoke?

London Gallery Day, which extends opening hours in an area centred on EC1 for the whole weekend, sets out to provide a handy means of visiting 22 listed galleries. It's thoroghly recommended, though not perfect: I’d already seen three of the shows, but found three of the others were closed, and failed to get to four of the remaining 16 in the time available.  The standard is high including Emma Talbot at DomoBaal, Kate Terry at Dalla Rosa, Salvatore Arancio at the Contemporary Art Society, Maria Zhale at Arcade, Elizabeth Gossling at Tintype and Los Carpinteros at Parasol Unit as well as these three shows: 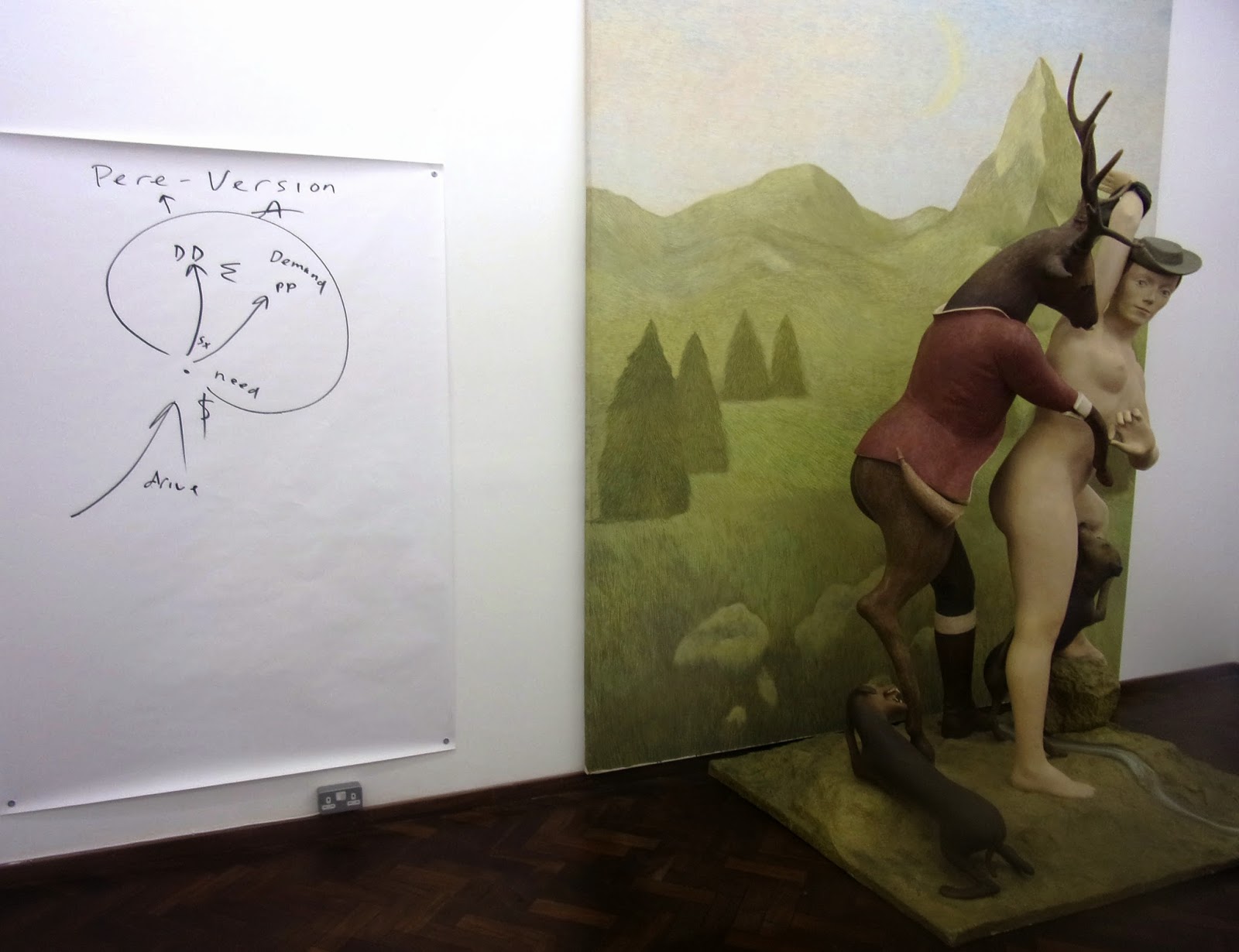 The Symptom of Art at Cabinet

Cabinet have found a particularly persuasive framework in which to showcase their holding of 60% of the life-sized figural tableaux made by Pierre Klossowski (1905-2001), who's better known for the drawings after which they're made. True, that’s to say only three out of five, though he’d been planning on fifteen had he lived longer. Anyway, the curious scenes which filled the imagination of Balthus’ brother have been categorised as ‘Pere-versions’ by psychoanalyst Dr Scott Von, and his several diagramatic representations of why – as shown alongside the sculptures -  make suggestive sense. 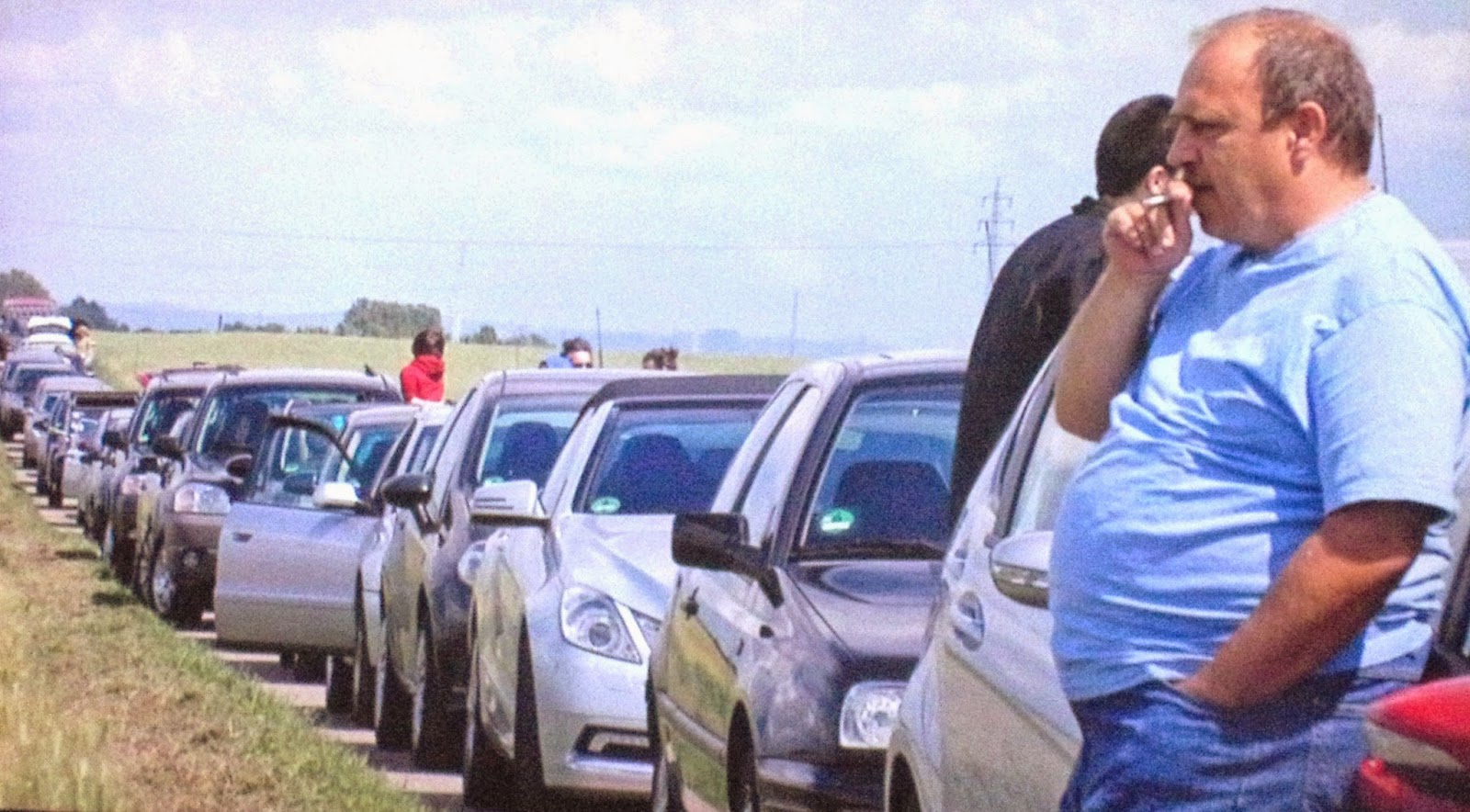 Swedish artist Johanna Billing has made a traffic jam soothing and entertaining. The citizens of Pullheim, an artificial city made up of twelve villages near Cologne which were administratively united in 1975, are shown to be pretty chilled out when caught in a tailback, contentedly eating, playing games and chatting. They do so against a surprisingly rural background, and to the sound of another kind of jam - the jazz piano of Keith Jarret at Cologne, also in 1975, as revisited here by the Swedish musician Edda Magnason. You won’t have had a more positive traffic jam experience! I mentioned this to some cynical Berliners I met later, and they thought it typical of the Rhinelanders to be unjustifiably upbeat.

Tal R found fame as a painter, but his decidedly original show Chimney School of Sculpture at Victoria Miro uses four sculptural elements. Downstairs are cheerfully colourful geometrically patterned chimneys made – rather impractically – of fabric; bronze and clay forms, most providing a glazed take on the Chinese tradition of the scholar’s rock; and , and bespoke sofas of some chromatic magnificence from which visitors are encouraged to contemplate the room. Upstairs a corridor has been constructed to run through the space, pointlessly apart from its containing an impressive variety of paintings and lightboxes all depicting  closed pull-blinds, one image denying implied others.

Tate Modern is open late every Saturday: a good time to go, even if I’m a little puzzled by the overwhelmingly positive critical response to Sonia Delaunay's huge retrospective. True, it's enjoyable, and we shouldn’t dismiss the bulk of her work – as used to happen – because it’s spread across clothing and design rather than the painting in which she had her primary moment in 1910-14. I like this transitional painting of almost-abstarct tango dancers. But does her career as a whole really have the depth and meaningful development to make her a major figure?