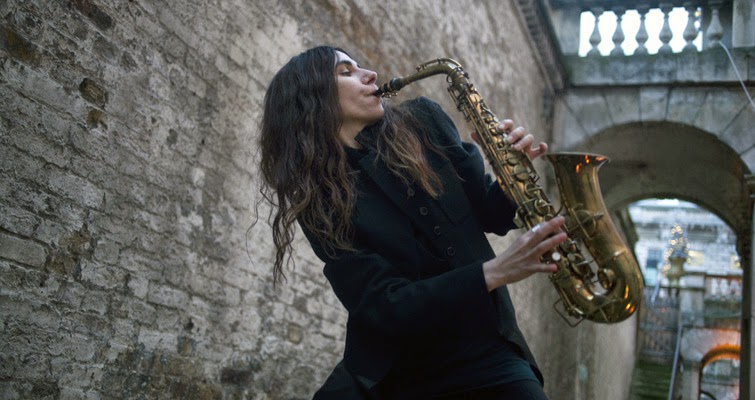 There’s plenty of precedent for rock musicians turning back to their art school roots (Ronnie Wood, Paul Simenon and Pete Doherty, to cite three with recent London exhibitions), but their approach hasn’t typically been conceptual in nature. PJ Harvey has also continued to draw, indeed some of her sketches can be seen on the wall of the purpose-built studio at Somerset House in which she and her band are recording a new album with members of the public able to watch from behind one way glass. They can hear the musicians, but the musicians can’t hear them. Almost a hundred 45 minute sessions – instantly sold out – were available to audiences of 50 at a time in January and February.

Double Mercury award winner Harvey has built a dedicated following over her twenty year career, and many were keen to get close to her and see behind the scenes of her creative process.  I’d never been to a recording session before, but those who have confirm that these were par for the course:  ‘Nothing here is materially that different from any other studio session I've attended’, says John R Mulvey in his review for the music magazine Uncut, ‘and it's worth remembering that plenty of artists, especially in the past, have recorded albums in busy studios, full of friends, business associates, hangers-on and so forth’. There was, then, little to show that the public presence altered behaviours.  When I was there the band concentrated on alternative backing vocals for one track, running through them to recorded sound with occasional discussions (‘I’m not sure the tempo is right’) and distractions (‘have we got James coming in next week?’). It was interesting, and not without creative spark and drive, but the banal aspects of the process were sufficiently apparent to call into question Harvey’s assertion that ‘the best part of any creation is the creating itself. That is when it's most vital, most exciting’.  Sometimes that’s true, most of the time it’s not. Harvey, of course, is a performer anyway: you could argue that it’s her producer, Flood, whose role is archetypally ‘behind the scenes’, who is most intriguingly exposed and potentially demystified by the process.

However, Artangel’s presentation of Recording in Progress isn’t framed as a chance to get a different angle on your heroine and a sneak preview of future work, but as conceptual art – in Harvey’s words ‘a sculptural object in motion and on different levels’. So: in what ways might it be art? One way into that question would be to think about what characteristics are shared with the work of mainstream artists. Four typical strategies occur: might this be a found object, a sculpture, an example of relational aesthetics or of narrative deconstruction?

First, this is a found object of sorts. The very act of declaring the sessions to be art makes us look at them differently, as when an object is re-contextualised by being placed in a gallery. Indeed, as if to reinforce that association, the studio is a white cube, the scale of a typical gallery, and painted white and with white chairs and sofas. That said, given anything could be ‘seen as art’ in this way, one wants a bit more reason behind the particular choice. The most promising such logic might be that we are watching a creative process comparable to, say, painting, and are invited to reflect on its nature and draw parallels. One might think of the famous film of Pollock in action, all theatrical flourish and no sitting around wondering what to do next.  Maybe Pollock never did sit around in that way, but here we get a more typical and complete picture held up for inspection. There are also parallels with Warhol’s interest in celebrity, and the deadpan style of his films, privileging the minutiae of Factory life with a degree of attention which suggests it’s all art or the inspiration for it.

Recording in Progress could also be a sculpture, of three possible sorts. First, Harvey herself has said that music is ‘sculpting in sound’. Maybe so, but that’s a fairly standard trope to which nothing extra is added. Second, the sculpture could lie in the simple matter of what’s arranged in front of us: one woman and several men sat around in a room dominated by instruments, microphones and a large control panel. An aesthetic does develop out of that, and plenty of artists have created or replicated rooms as art:  Ed Keinholz, Marc Camille Chaimovitz, Fischli & Weiss. Robert Kuśmirowski… Certainly there are sculptural aspects – but both the agency and the purpose are different. This room is designed and made by non-artists for activity, not for contemplation, and so the sculptural aspect collapses back into its co-option as a found element. Third, it might be the activity which is sculpturally presented. At last year’s Folkestone Triennial, German artist Michael Sailstorfer buried 30 gold bars in the sand of the harbour, provoking more digging than usual: rather neatly, what one would expect to take place on a beach did take place, but the extent and purpose of the activity were different, and the people looking for the gold could be interpreted as a sculptural tableau caused by the artist. Folkestone Digs, 2014, seems much closer to what’s happening at Somerset House: what might have happened elsewhere and in private happens here and in public. What we see might be the same as it would have been elsewhere, or it might be altered by the intermittent, unseen and unheard presence of the public.

Another comparison would be with the recreation of concerts, as practiced by Iain Forsyth and Jane Pollard. Somehow it’s not being your own concert makes it feel more like art. And if you push that aspect of performance far enough, there might also be an element of relational aesthetics: what Nicolas Bourriaud characterises as ‘a set of artistic practices which take as their theoretical and practical point of departure the whole of human relations and their social context, rather than an independent and private space’, for which purpose the artist does not define the outcomes, but acts as the catalyst of a community.  That fits with how the presence of the audience of Recording in Progress – though not their actions - could alter the outcome… in due course, attendees will l be able to listen to the album and wonder. That, though, seems to be asking too much of the degree of engagement achieved.  There's a sort of distanced intimacy finding oneself five feet from Harvey without any actual mechanism for interaction, but that doesn’t make the experience a meaningfully relational one. Just singing along at a concert might amount to more.

Finally, it’s a common strategy of contemporary art – particularly film -  to undermine narrative conventions, and if Recording in Progress is approached as a rock’n’roll soap opera on the making of an album, then its fragmentary and repetitive nature soon dashes the expectation. Yet it’s probably too much to say that a narrative expectation is deconstructed, because there’s no strategy involved: we just see an existing process presented as it is.

I would conclude that, if Recording in Progress is art, then it’s only a weak exemplar of any of those four strands. Where it scores is in keeping all those options in play. That gives attendees plenty to think about during their 45 minutes – and, to end where we began, they get the bonus of an enticing, if less thematic, chance to see PJ Harvey’s working process and glimpse her next direction. 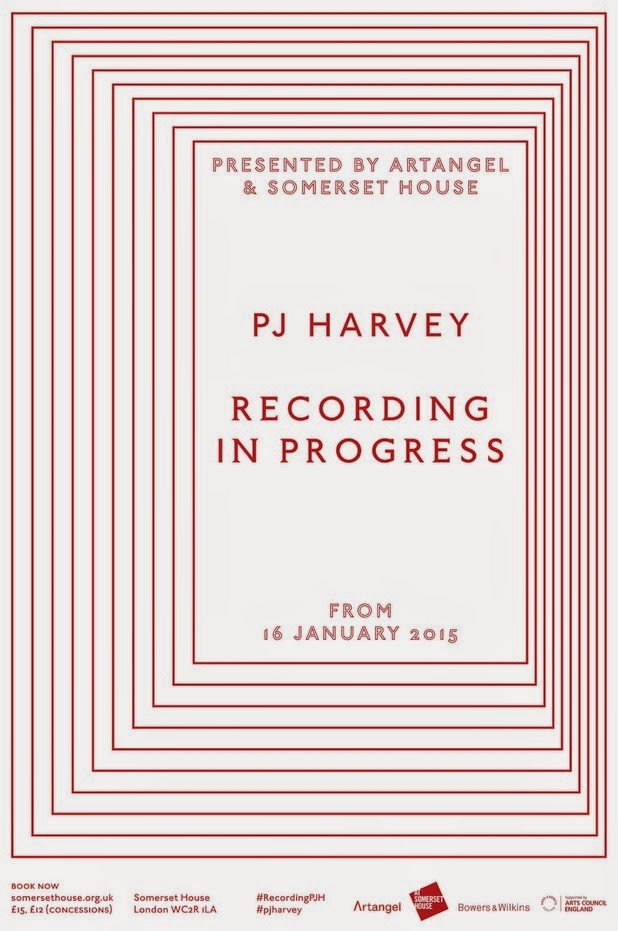