BERLIN ONE YEAR BACK

Perhaps I should have been in Berlin the first week in May: but here were my impressions from last year of the sort of thing I might be missing, concnetrating for STATE magazine on the British presence...


THE BRITISH IN BERLIN


The Berlin Art Weekend on 1-3 May 2014 featured the coordinated opening of shows by fifty of the city's leading galleries on Friday night, followed by extended hours through  Saturday and Sunday. Berlin doesn't have a conventional art fair, so this becomes effectively 'Frieze Week without Frieze', with private collections, public institutions and the many other galleries upping their game in parallel.


Such profusion can be overwhelming, and just a thematic sample provides plenty – for example, the British in Berlin. There were ten solo shows by Britons, six of them at the 'official' fifty galleries. I spotted a third of the 29 Turner Prize winners to date in group shows – though one of them, Wolfgang Tillmans, is a German who lives in Berlin. Plenty of other British artist and gallerists have moved there.

The weather was good… Martin Boyce’s barbecue edition Forest Fire  (Johnen Galerie) might have come in handy: they’re his most light-hearted play yet on the shapes derived from concrete trees designed by Joël and Jan Martel in 1925 - ready here to be linked to nature and architecture along with the appropriate fuel of charcoal.

Where would be at such weekends without an eccentric performance or two (here’s Marco di Goivanni as pipeman); rooms filled with such matter as rickety bison (Lutz Bacher), rubbish bins (Klara Liden), beeswax (Wolfgang Laib) or popcorn (Michael Sailstorfer); and a nice present for the wife  - perhaps, to continue that last theme, one of Pae White’s £750 popcorn necklaces in ceramic and gold?

Robert Holyhead (born Trowbridge, 1974) has shown extensively in London in recent years, but the fifteen new oils (about 60 x 40 cm)  in his Berlin debut brought a new authority – and popularity at £9,500 - to his abstract language. He  mixes the fluid and the sharp with landscape resonances: in Untitled (Across) two dots appear to be traversing a cliffy vista, achieving Holyhead’s goal of ‘both a type of personal language and some familiarity with the world’.

Julian Opie was the only artist with two solo shows, both concentrating mainly on his technique of plotting movement by filming people on the street and converting the data, life size, into his familiar linear shorthand. Krobath had the colour, in both static and moving versions. Gerner had the better location, with a woman in double-sided black and white strolling along the bank of the River Spree, accompanied by three other simplified animations: fish, boats and trees.

Glasgow-based Welsh painter Merlin James is known for his gently astute probing the language of painting often linked to memories of people and place, by such means as incorporating the frame, using a transparent ground and attaching objects.  Naturally there was plenty of that in this 36 work retrospective, but there was also one of his less often seen series of ‘sex paintings’, which push the intimacy further whilst distancing the viewer through the paradox of close-up. 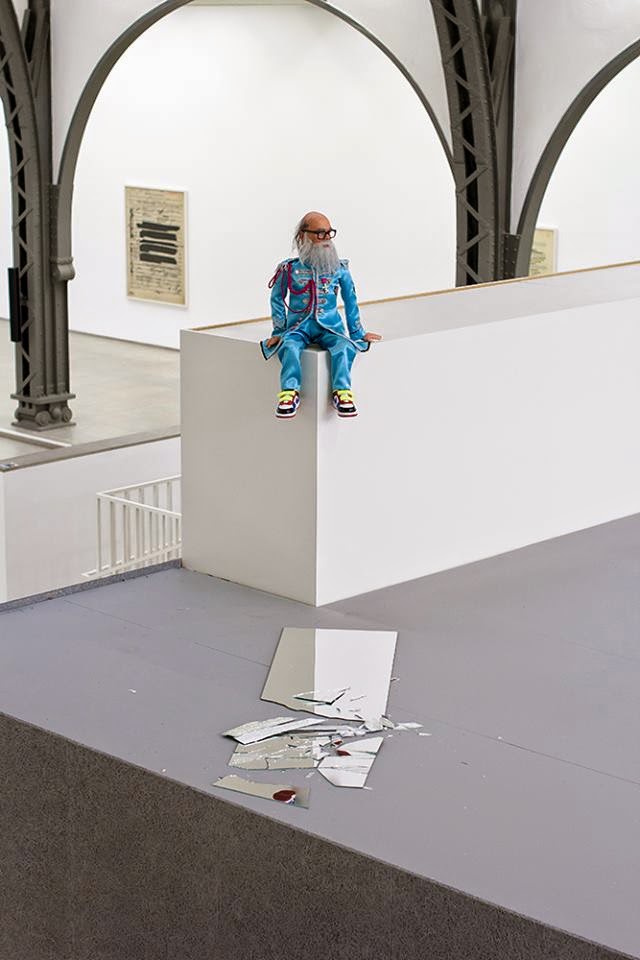 Jonathan Monk: Paul together alone with each other (Sgt. Pepper) at the Hamburger Bahnhof

The ex-railway station’s vast main space echoed to a Susan Phillipsz’ soundpiece, above which  sat Jonathan Monk’s playful literalising of his own tendency to confuse Paul McCarthy with Paul McCartney by dressing the American master of messy extremity in the ex-Beatle’s Sergeant Pepper suit.  The puppet was originally shown gazing into the mirror, which had now fallen and smashed, giving the figure a somewhat forlorn air – perhaps at Monk’s theme: the inevitability of misunderstandings. 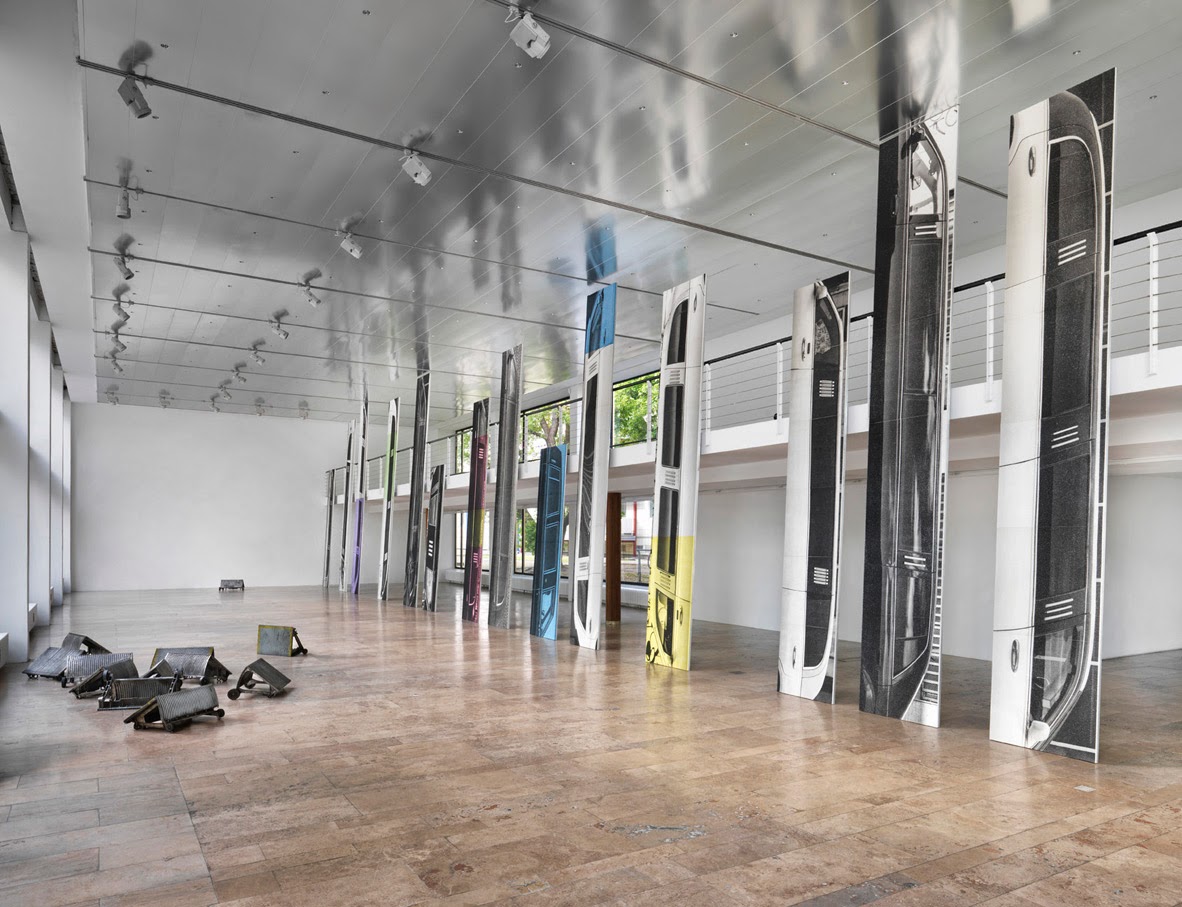 New York based Adam McEwen (born 1965) has no London gallery, but has become one of the most successful artists from London. His solo debut with Capitain Petzel had fifteen life-size photographs of stretch limos, lined up vertically as if terminally parked; a collection of escalator steps scattered round the floor; and, in the basement, endless loops of the path through - but never out of - the four car tunnels which connect Manhattan to the mainland. So much aspiration to be elsewhere, disappointed, made the elegant space on Karl-Marx-Allee a good place to be. 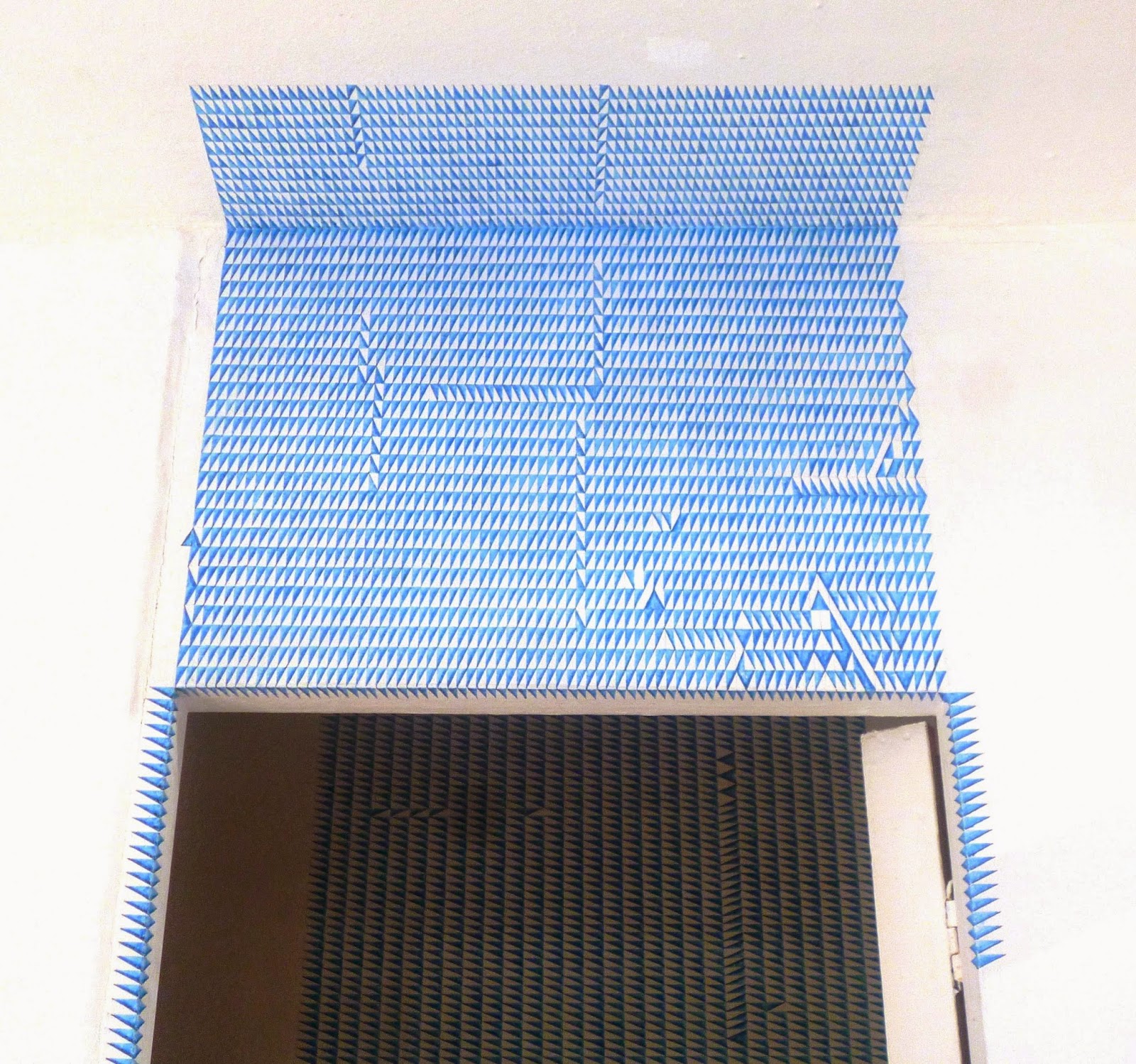 Richard Wright: Nine Chains To The Moon (Chapter 2) at BQ

Richard Wright has a changing year-long residency at Jörn Bötnagel and Yvonne Quirmbach’s space. The second phase included his choice of works by fellow Britons Tony Swain and John Latham. Wright showed paintings on pages from books, and had covered the outside of the gallery with a collage of posters: it was only in the conservatory-like Pavilion of the Volksbuhne am Rosa-Luxemburg-Platz just over the road that he’d made one of his characteristic  temporary wall drawings.

On the centenary of his birth, British gallerists Harry Blain and Graham Southern are running a London - New York – Berlin blockbuster designed to lift Lynn Chadwick out of his middle market position to prices more comparable to those of his contemporaries, Hepworth and Moore.  The Berlin leg delivered on spectacle, with his big geometric beasts ranged round an impressive space also viewable from a balcony two floors up.

Berlin is a good place for artists to live: cheap rents, good studio spaces, lots of galleries, a vibrant art community. Tacita Dean is among the resident British artists, and she launched this 6.5m wide edition over the Gallery Weekend. Quatemary is a landscape of post-apocalpytic ruin, constructed from found 19th Century albumen prints merged with the artist’s writings and drawings. It refers to the Yellowstone supervolcano, which has no means of release but, according to Dean, will wipe out several American states instantly if it does blow, after which the ash cloud would cause a worldwide ice age. It did blow 2.1m, 1.3m and 640,000 years ago, so Dean's vision has some plausibility... 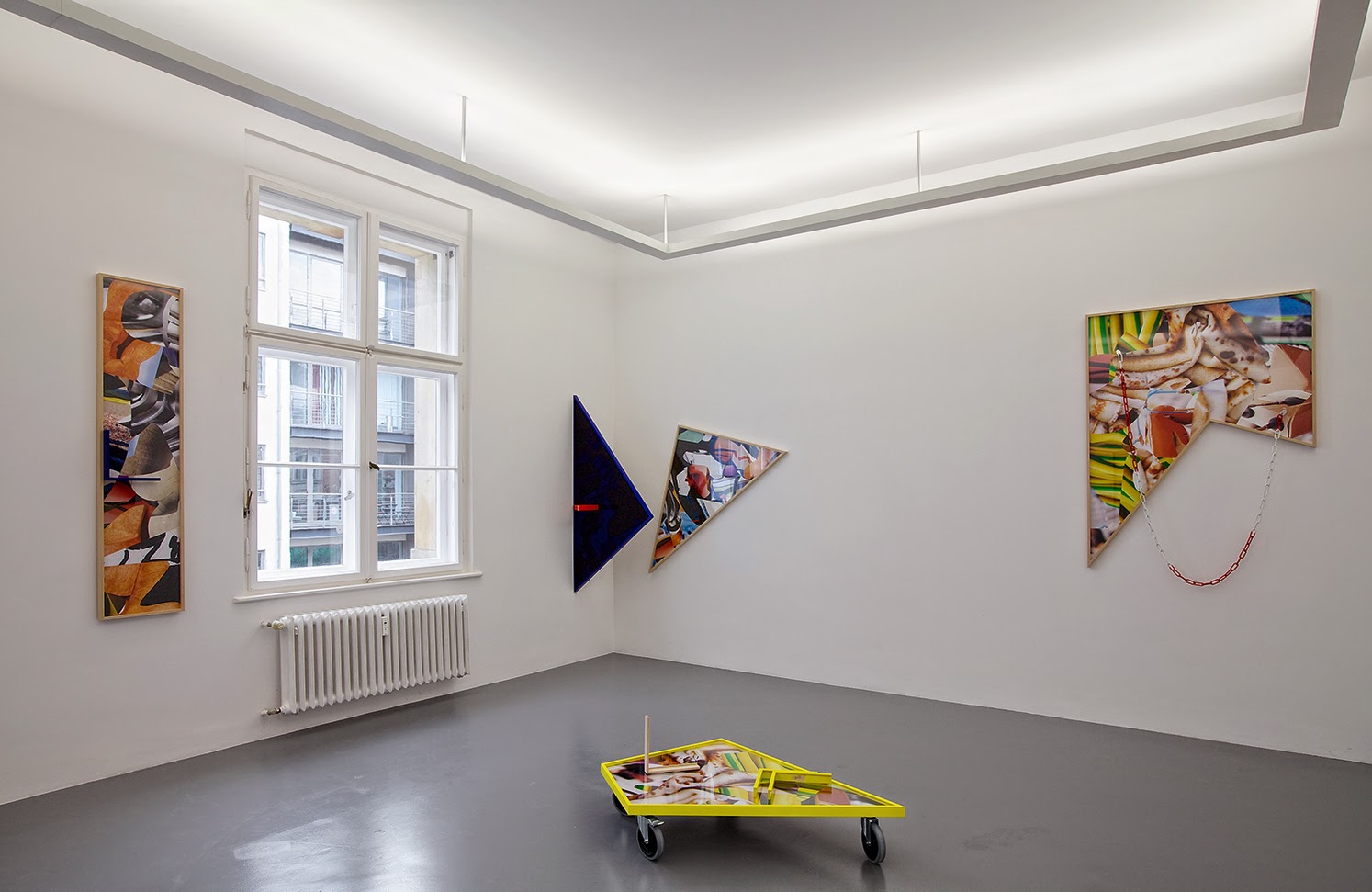 STATE readers with razor sharp memories may recall that Ché Zara Blomfield’s project space in a Bethnal Green basement  featured when I chose ten new galleries of interest a couple of years back. She was then showing adventurous New Yorker  Kate Steciw, who uses the networked images as raw material for photographs which become objects. Now Ché’s in Berlin, ready to set up her own space shortly and working at Neumeister Bar-Am… who’re showing Steciw: five stock images are rearranged along with chains, wheels, magnets etc to turn ubiquities into an installation of great verve. 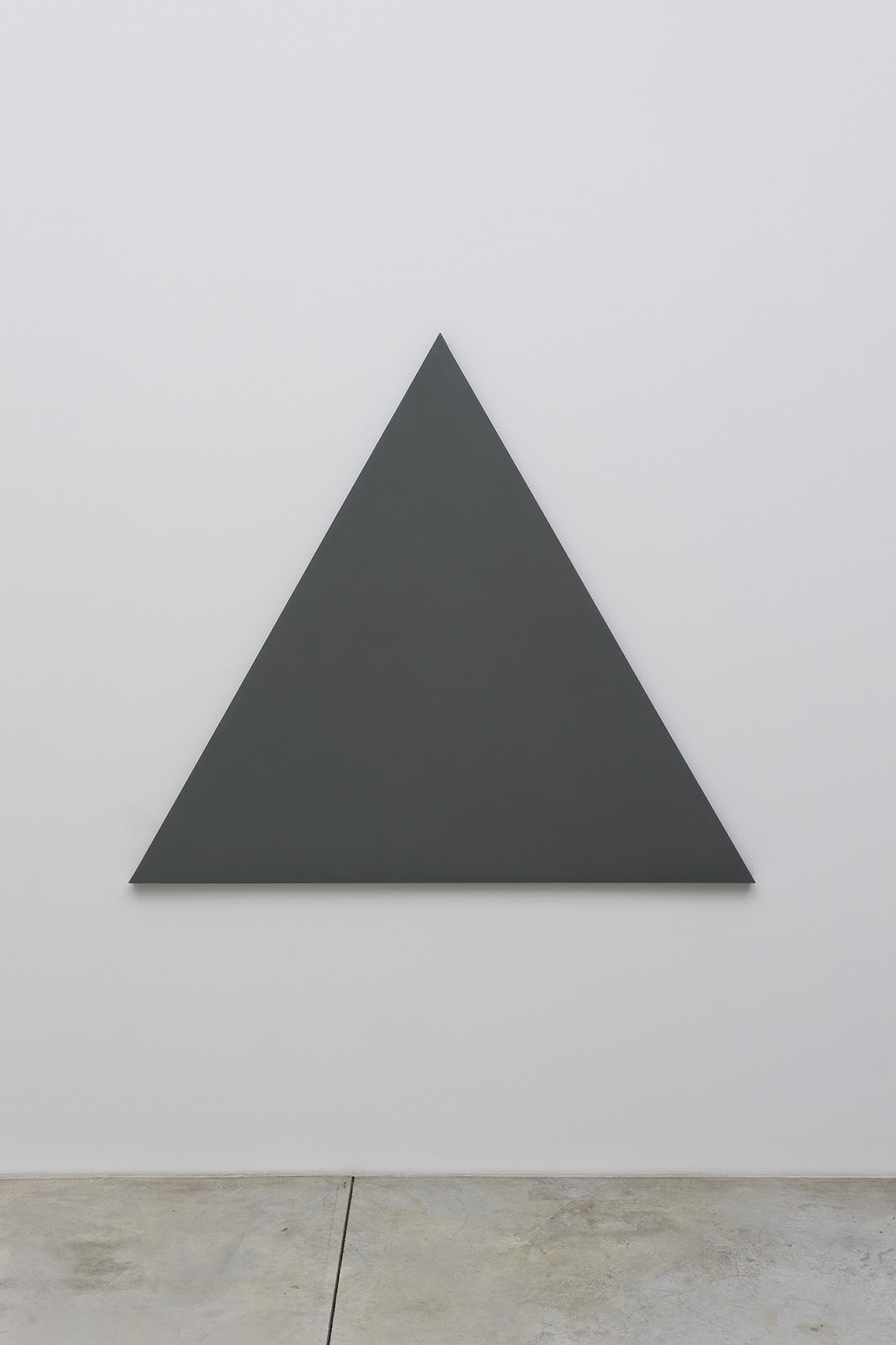 From 1972 onwards, when he first showed them at Konrad Fisher itself, Alan Charlton has stuck to grey paintings - hinting, perhaps, at his Sheffield childhood. They come on spruce frames 4.5 cm deep, their sides in multiples of 4.5 cm. Those constraints are intended to cast the objecthood of his paintings and their relation to the surrounding space into maximally sharp relief. The triangle has become a favoured form of late, and Charlton had a show of nothing else in Fischer's main space in 2012. This one is at the darker end of the various greys which Charlton mixes afresh from multiple colours for each painting. 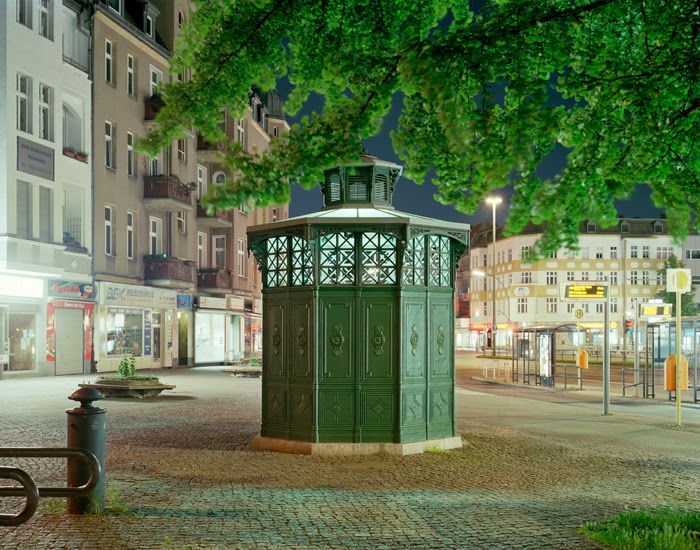 There was a ten gallery mini-fair on the theme ‘I AMsterdam YOU BErlin’: one of the five Dutch participants had a set of night photographs of Berlin’s so-called ‘octagonal cafés’ – which is to say, elegant nineteenth century pissoirs in the city’s squares.  Only 16 of these green metal structures remain from a peak population of a hundred. But if they do disappear, then these atmospheric long exposures will provide a worthy record. True, the photographer was British by name rather than by his German nationality... 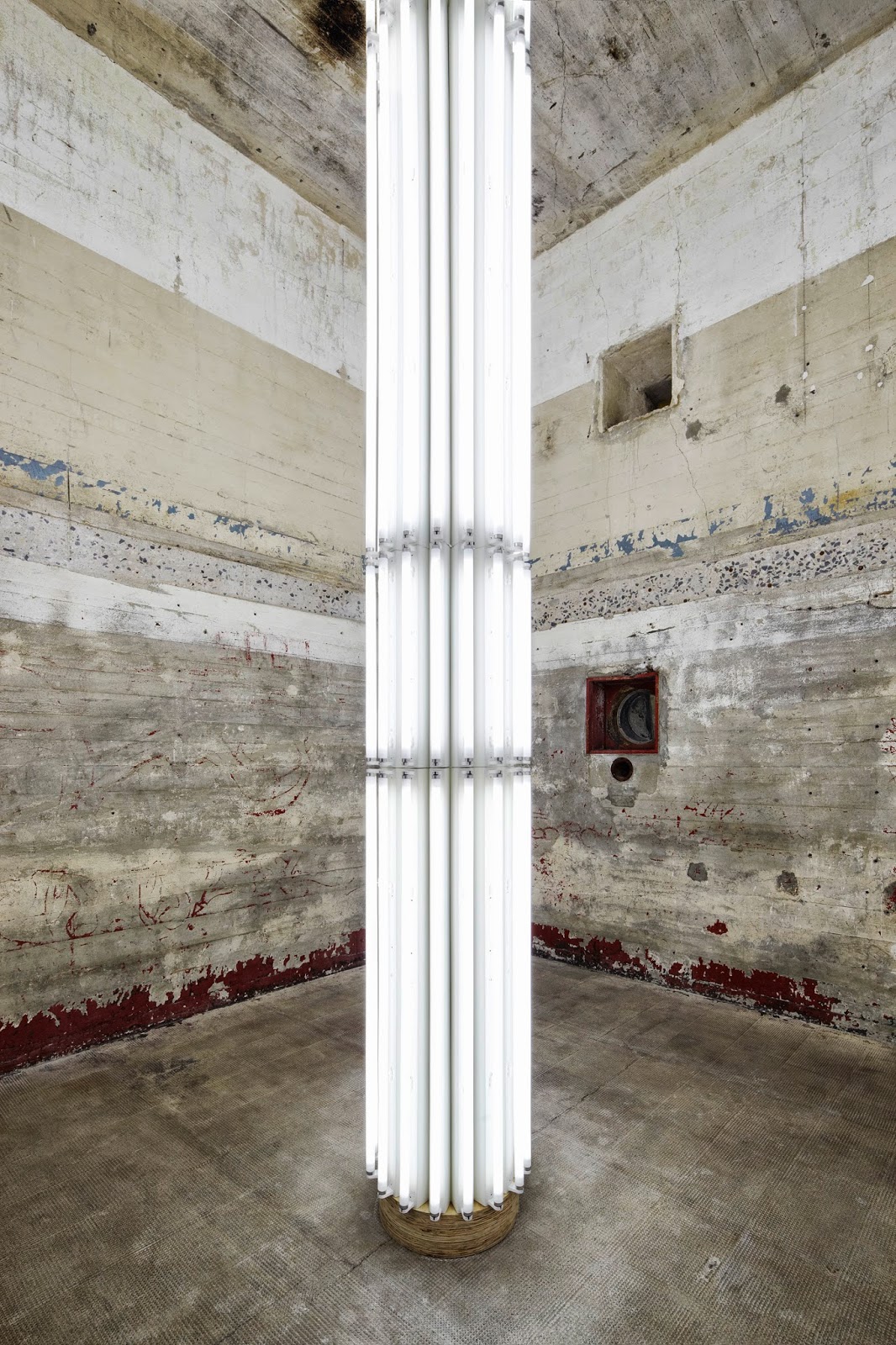 The most impressive private collection the latest selection from the Boros Collection in the Bunker constructed in 1943 to shelter up to 3,000 from air raids: five floors plus a new penthouse on top, concrete walls up to two metres thick, formerly a prison (1945-49), fruit store (1957-91) and night club (1992-96). The Boros policy of buying and showing emerging artists in depth led to impressive multi-room surveys of such as Alicia Kadje, Danh Vo and Thea Djordjadze among only 21 artists shown across 80 rooms... and just the one Briton: Cerith Wyn Evans, with an incandescent column and photographs from which circles had been tellingly removed.