THE PRECEDENT FOR ART15

Art14’s USP was its geographical breadth (tagline: ‘London’s global art fair’), reflecting a much more balanced representation between continents than at, for example, Frieze. This year it was also big, with 180 galleries despite nearly half of the inaugural 120  not returning. I had thought this might result in a more cramped environment, but not so: more of Olympia’s vast hall was opened up, though that did mean that much was under a low roof rather than below the expansive Victorian structure. That spaciousness enabled ART14 to maintain a strength in sculptural work, and was a boon when the crowds came. The fair was  literally humming on the Sunday, when not only was it busy but performance artist Leah Capaldi had actors sprinkled around with instructions to pass on a hum. The Fair as a whole was wildly uneven. With most of the 25 special projects dotted around being sculptural in nature – including work by the highest profile artists, Ai Wei Wei and Yinka Shonibare - and with gallerists having room to show large pieces if they wished, I was more drawn to sculpture than to anything else. 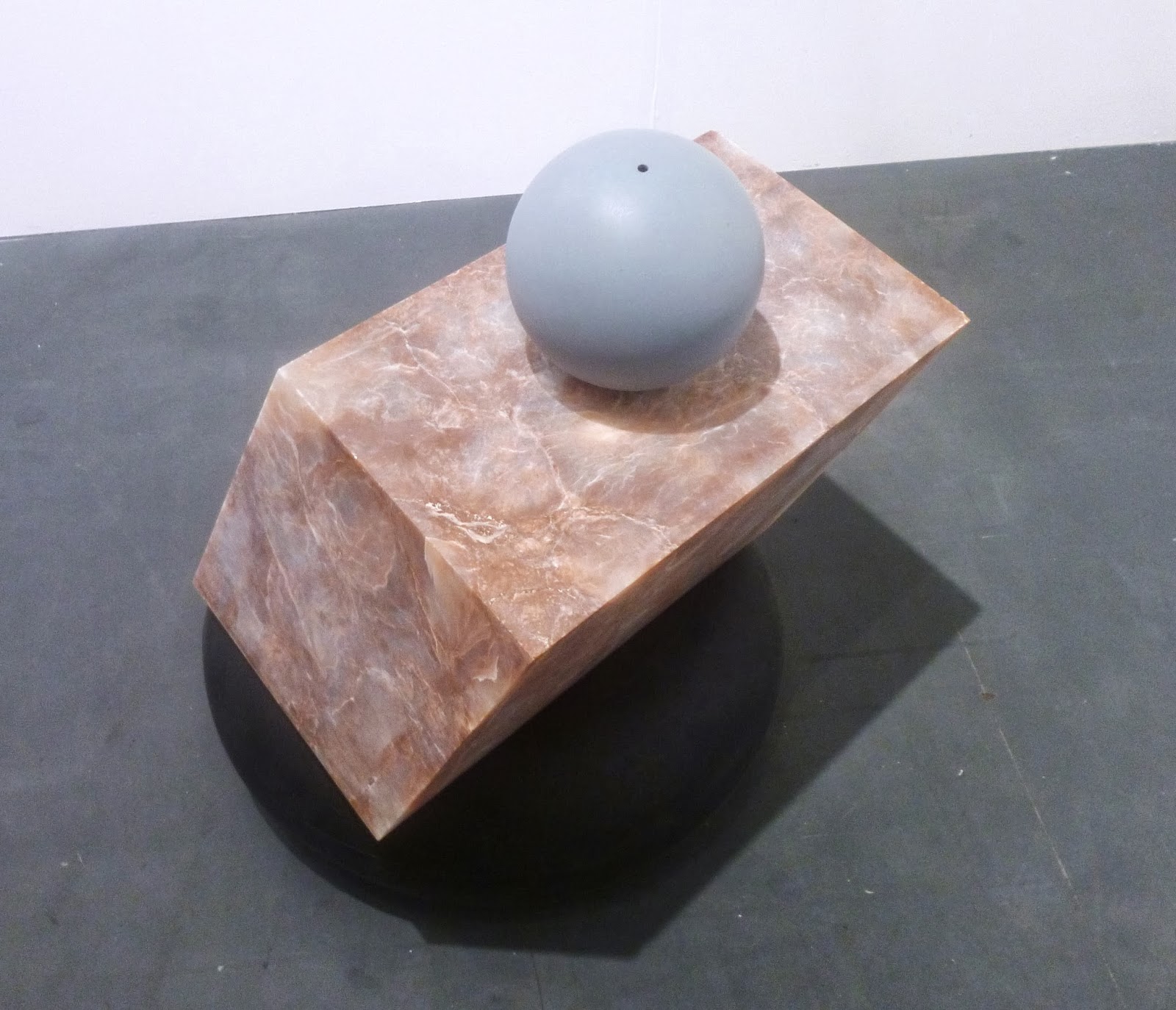 Alison Wilding, who was shortlisted for the Turner prize as long ago as 1992 and also contributed a sculpture project, is known for the sensuous appreciation of material qualities which this stacked work demonstrates. That ball is balanced purely by being part-filled with stabilising sand. It sits on an impressive parallelepiped of marbled alabaster, the weight of which seems to make less of an impression than expected on the car tyre beneath. Why so? Because it's actually the solid rubber cast of a tyre, and so suited to the paradoxical role of non-rock rock-bearing bedrock. 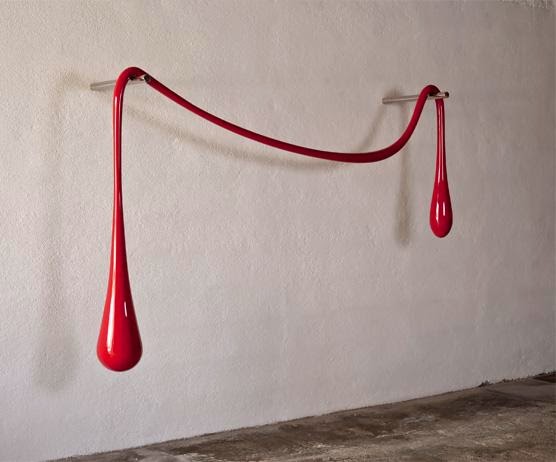 Mallorcan-based Santiago Villanueva (born Madrid, 1964) makes gleaming organic shapes of Styrofoam, fiberglass and lacquer, hang from the artist’s steel fittings to make an attention-grabbing front-of-stand. Energised by seeming to be just at the point it glops down to the floor, there’s also a tension between the sleek surface and an intestinal echo – are we inside or outside the body? Villaneuva says his aim is ‘a soft skin of industrial manufacture crystallizing the internal organic emotions’. 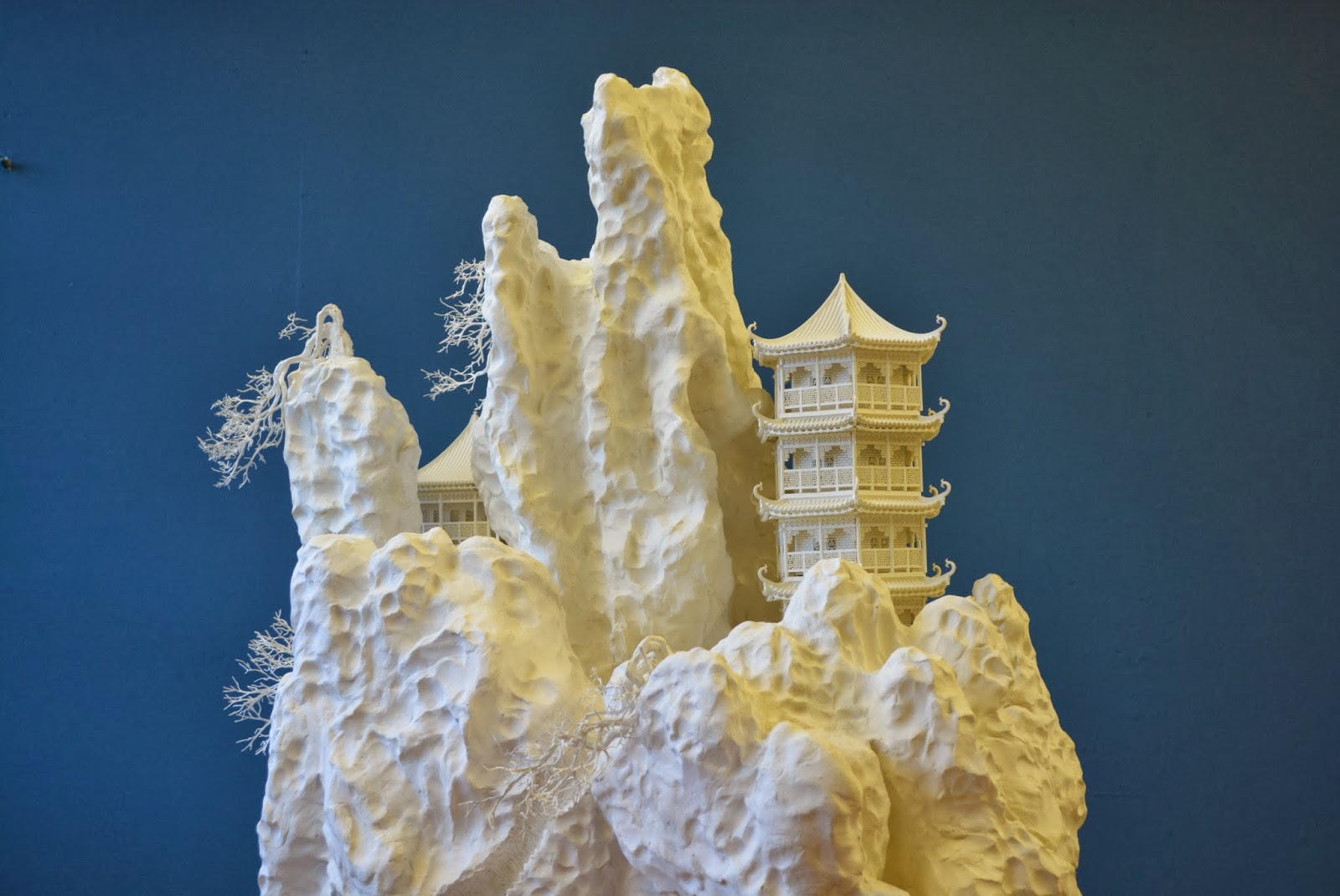 Back in the 80’s, the Victoria & Albert Museum’s collection of Chinese sculpture left a strong impression on the teenage Piers Secunda. Adopting the way in which traditional Chinese painters conjure landscapes out of memory and imagination, he sets a fantastically calibrated hanging monastery in dramatic mountains, the back of which are formed by a cast of a shrapnel-damaged former wall of the V&A, as bombed in World War II.   Oh, did I mention that this optimistic tale of fragility's survival, like most of Secunda’s work, is made out of paint? 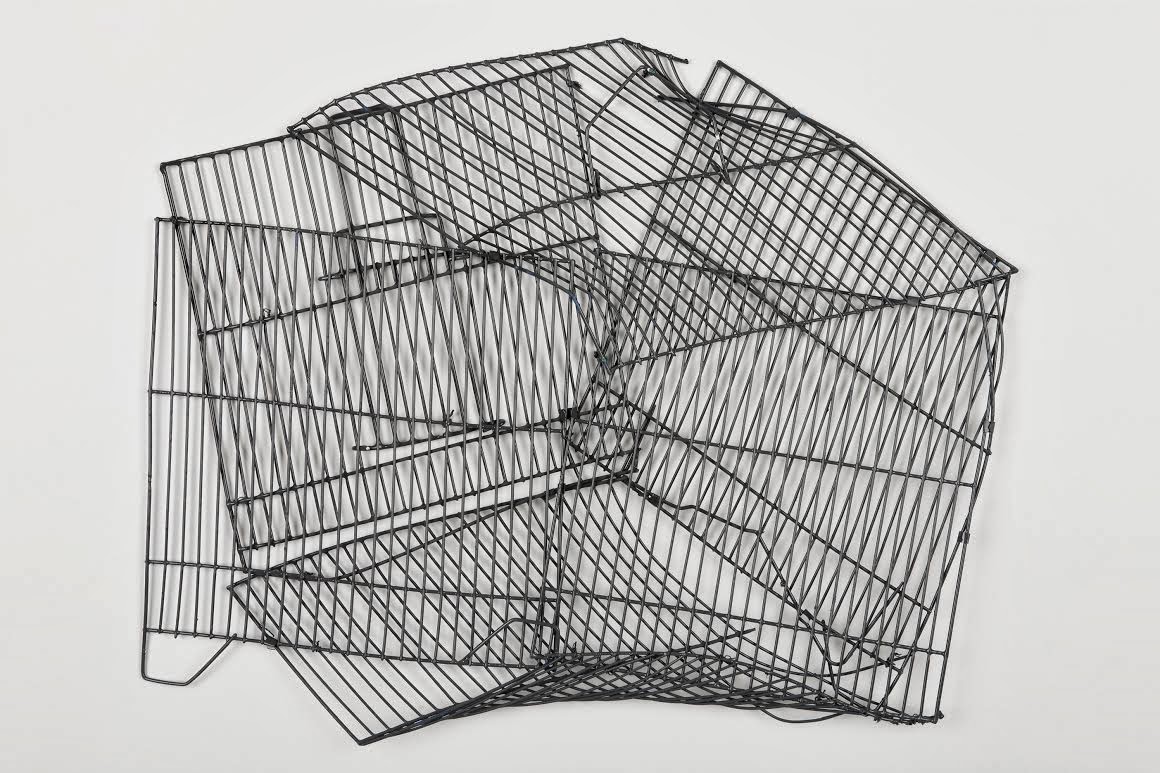 These very economical works from the Colombian Johanna Calle (born 1965) are simply bird cages squashed against the wall. Yes, that’s a neat way of supressing the modernist grid, but Calle also makes a double reference to life in her home country: first, she symbolically prevents the imprisonment of at least one bird from the indigenous species, many of which are threatened - all too often kept as pets despite being endangered species. Second, she protests the very cramped housing conditions in which the typical Bogotán lives. 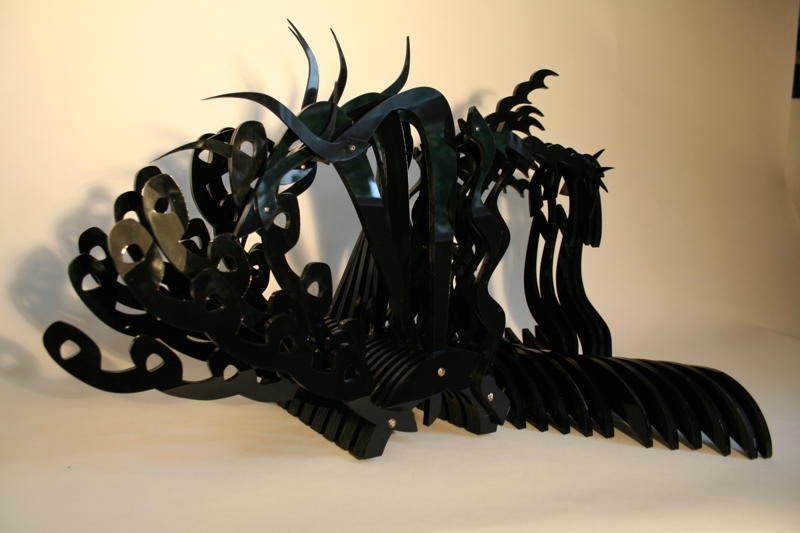 Mohsen Vaziri-Moghaddamm has divided his life between Iran and Italy (1955-64 and 1985 to date – he’s a very energetic 90). Lionised in Tehran, he remains little-known here despite a major show at the ICA in 1968, and an impressive back catalogue notable for its sand paintings and immense moveable constructions from the 1970’s, They were best altered with the help of a ladder, but this later domestically scaled version of Pardis (‘Paradise’) - comparable with Lygia Clark’s bichos - was displayed in a set-up resembling an animal, but could easily be switched around by hand. 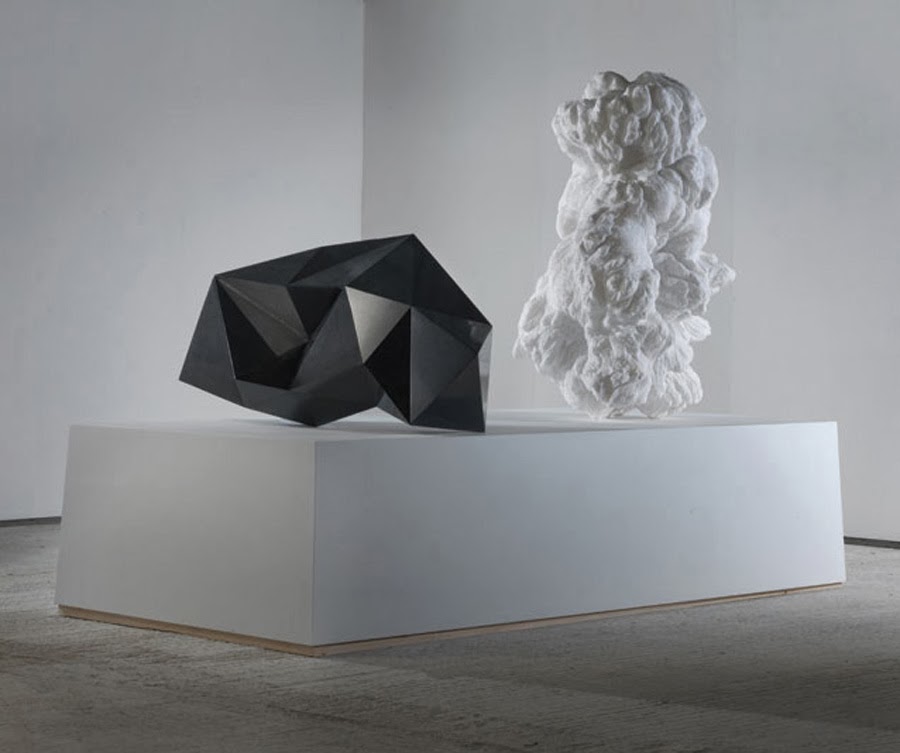 Devon-based Mat Chivers likes to strip the world back to elementals and to render traditional subjects with the most modern techniques. This impressive two part sculpture starts with a stacked cumulus cloud, rendered paradoxically weighty in what he told me was as big a piece of alabaster as you're likely to find, given how it grows in cloud-like nuggets. It's rendered through a computerised translation into thousands of triangles, which were then reduced down to the most essential 56 faces for the Indian black granite version. 'Syzygy'? But of course, a poetic term for the combination of two metrical feet into a single unit... 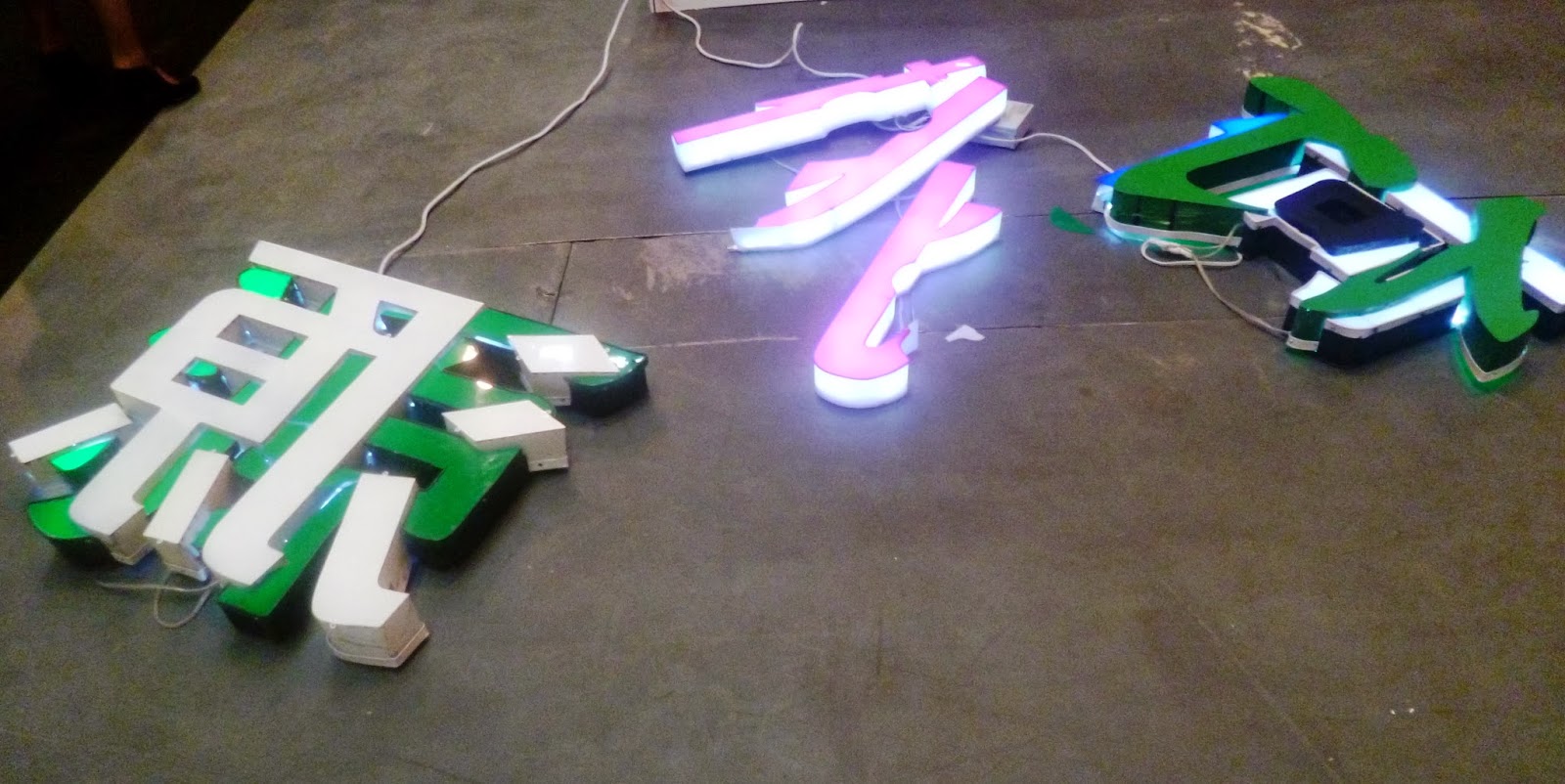 In a striking combination of nostalgia for his roots amidst China’s rapid change and a vandalistic attack on the new, He An (born in Wuhan, at 10m the most populous city in Central China, in 1971) commissioned the theft from shop signs of the three neon characters making up his father’s name: He Tao Yun. The damage to the still-operative lighting from its being hacked away gives the resulting floor sculpture a ramshackle aesthetic at effective odds with the futuristic connotations of neon. 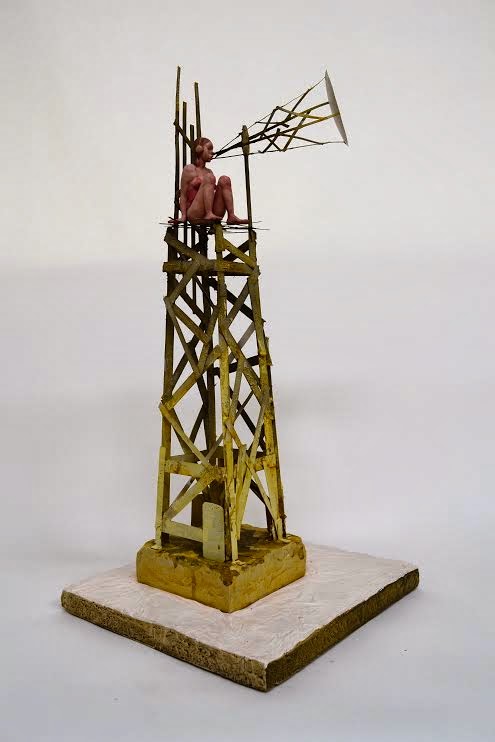 When painters diversify into sculptures derived from their painted motifs, the results can seem merely illustrative (see e.g. de Chirico or Dali), but I found the still-painterly structure forced onto Kai Klare’s atmospheric pictures by his recent turn to small-scale aluminium, plastic and concrete sculptures focused the charge from his faintly mythic figures. They seem adrift between modernity and the forests and history of East Germany with which Klahre (born 1981) grew up. Is this a teenager ignoring the potential of a listening tower in favour of her own headphoned world? 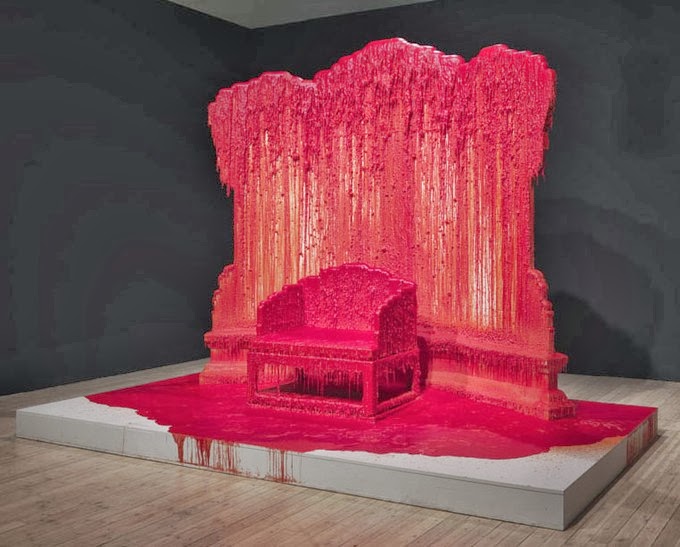 Zhao Zhao was Ai Wei Wei’s assistant for seven years, and like him comes from a family which was exiled to the north western desert during the Cultural Revolution. At 31, he’s now making a significant impact of his own through work as wide-ranging as Ai’s, and has himself fallen out with the Chinese authorities. 'Waterfall' is a replica of the Chinese Emperor’s throne from the Qing-Dynasty (1662-1722): by covering it in dripping red wax, Zhao suggests blood and implies a continuity of repression between Imperial and Maoist regimes, which both adopted the colour. 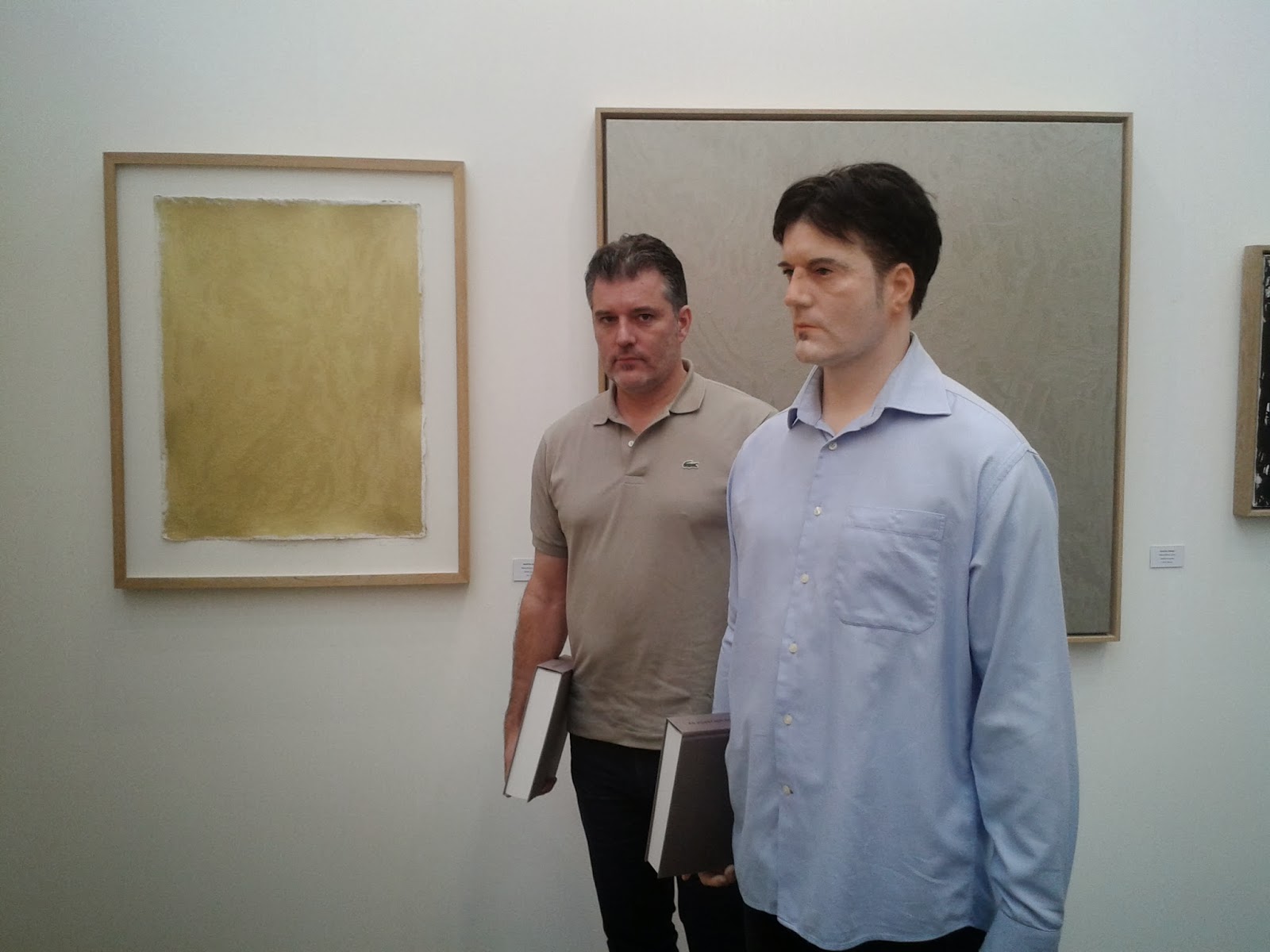 Vestfossen resident Morten Viskum had one of the more outlandish practices on display. He makes a life-sized realist portrait every February, showing himself in guises from Christ to bodybuilder to clown to this 2013 version as a collector, holding in his hand the 700 page catalogue for Viskum's own extensive holdings of art. So what are those tasteful near-monochrome exercises in subtle graduation behind his statue and its model? Just that, except they’re painted as performances, and not with the artist’s hand but the severed hand of a dead man which Viskum uses as a paintbrush.

True, this is not a sculpture, but young self-taught Nigerian Lakin Ogunbanwo achieves a maximally sculptural photographic effect through the simple devices of olive oil, dramatic lighting and life-sized prints of a gleamingly chiselled model. The chin is very much the point, proving a punch which chimes with Ogunbanwo’s parallel work in fashion photography, as did a colour set of black women with the prominent contrast of cherry red lipstick. 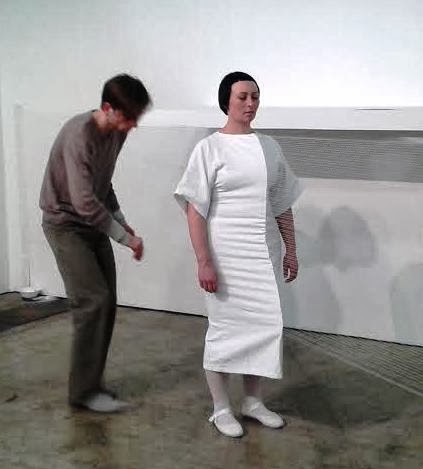 The performance programme included Lithuanian Židrija Janušait being thethered to a wall either side by assistants armed with white thread, as if the artist were refracting beams of light. The accompanying quotation from Roland Barthes brought memory and communication into play, recounting how he ‘happened on a photograph of Napoleon’s youngest brother Jerome, taken in 1852’. Barthes was blown away by the thought that he was ‘looking at the eyes which looked at the Emperor’, but found that few shared his amazement: ‘life consists of these little touches of solitude’.