SHOWS TO SEE: Up Now in London


Caroline Coon at Tramp's to 22 Dec 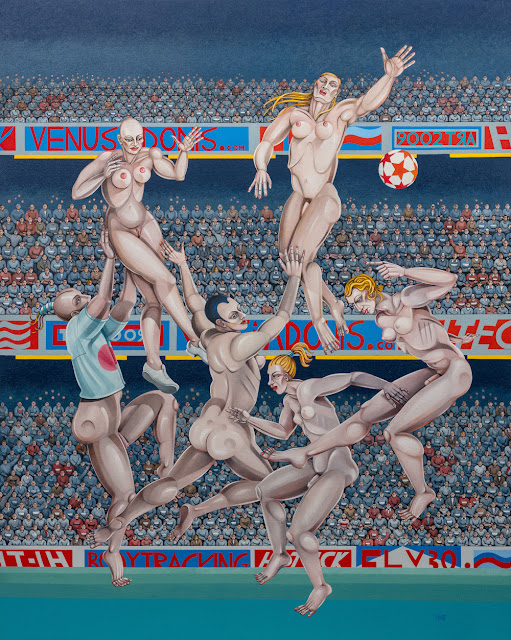 The mixed gender of 'A Sweet Lob from 25 Yards' 2009 is from the revelatory retrospective at Tramp's - Coon's first solo show at age 73 revealing a wide range of distinctive approaches. 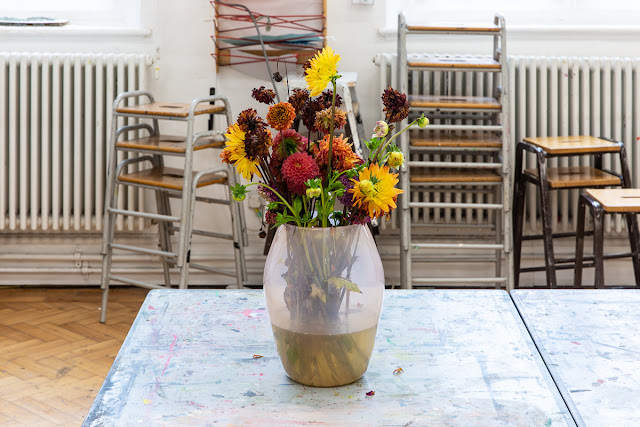 A satisfyingly complex combination of many simple-looking works which also turn out to be complex in themselves. It includes the largest group yet of Panayiotou's ongoing series of elegant shoes made from the handbags of the women in his life – some shoes visible, some hidden in their boxes, in line with a thread of revealing and concealing which runs throughout.  See the current Art Monthly for my full account. 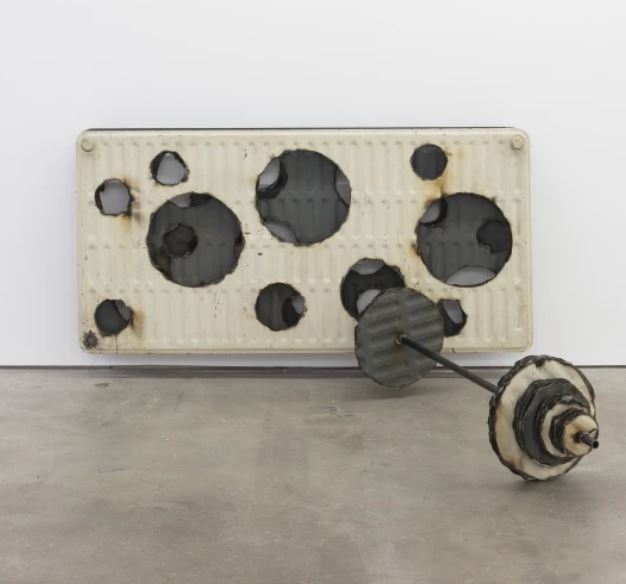 'Akumulator' (Polish for ‘battery’), 2019 is a reconstruction - using some original elements - of the gym in the squatted basement of a block of flats in which the teenaged Dudek used to hang out with his mates - also involved in football hooliganism - in the late 90's. Features equipment made from whatever was lying around. The image is a more recent sculptural version of weights made from an old radiator.

Pushing Paper at the British Museum to  12 Jan 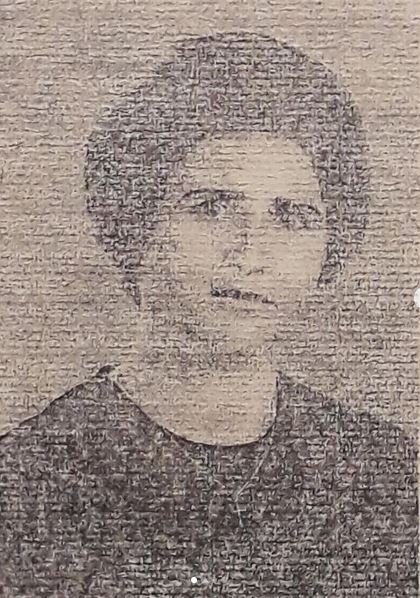 Hajra Waheed: from the ‘Anouchian Passport Series: Women with Amulets, 1-9’ 2008-11. The full series reproduces 198 passport photos taken by Armenian photographer Antranik Anouchain between 1935-70 in his Triploi studio. They were chemically transferred on to a new surface, then rendered in graphite by the  Canadian-born Saudi, an elaborate process which enhances our sense of connection to the anonymous individuals. The British Museum's mal-titled Room 90 show 'Pushing Paper' scores on every other count: an exemplary selection of 56 post-1970 works, free, helpfully themed, and with concisely informative work-by-work descriptions such as I'd like to have written myself.

'Counter Acts' at the Lethaby Gallery 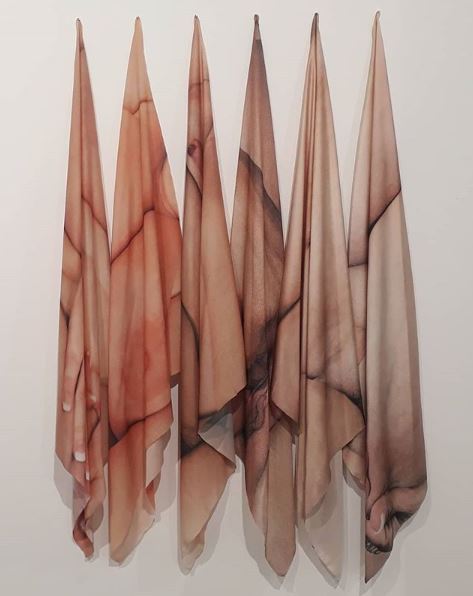 Alix Marie: 'Les Gaetianes' 2016 consists of pornographic magazine images scanned, printed on poly satin fabric and censored by the hanging, so tempting to viewer to spread out and reveal them. The title - at least for me - adds to the mystery. Typical of Marie in conjoining what a photograph and a skin can hide, and shown in 'Counter Acts' as one of the works young artists with a University of Arts background alongside many Turner winners and shortlistees to give a history of its artists' inter-connections. 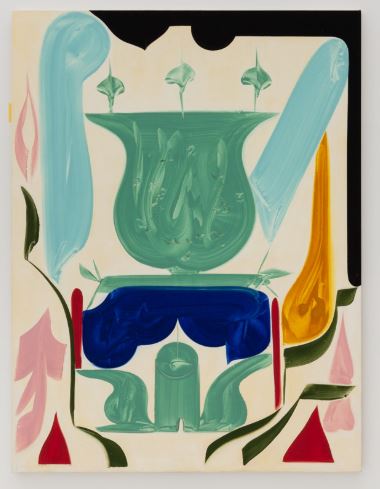 Patricia Treib explained how she uses the 'script' of a drawing to make a full scale painting in a day, using flat,wide brushes with paint thinned to an ink-like consistency and working on the floor. The scripts are always based on observations in the world, but presented so that they cannot be recognised immediately, though the titles tend to give hints. Much of the unrecognisability arises from her strategy of concentrating on the negative spaces around objects as much as on the objects themselves, making what is marginal more prominent and 'displacing the logic of space'. She uses colour similarly to help 'sculpt the space'. 'Patina' 2019  is named after the colour taken from ancient Etruscan bronzes, and features a clock as its most prominent form - it looks a little urn-like, but some of the numerals are visible. Treib likes to start from items of personal significance, and her father was a clock repairer. 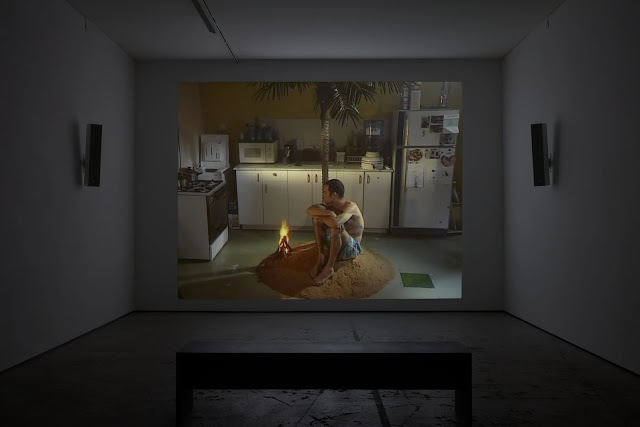 This still from 'Berkeley's Island' 1999 is from a succinct all-in-the-kitchen retrospective of three cinematically presented films, an entertaining yet nourishing way to spend 40 minutes. As Guy told me, the kitchen 'is the public sphere in the private home. It’s the town-square of the house. It’s where work needs and pleasures meet’. See Elephant magazine online for my interview with Ben-Ner. 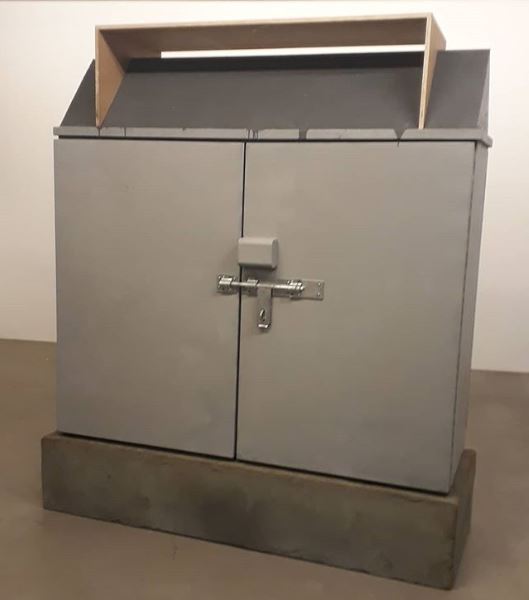 'Geometric Resistance' 2019 replicates a potent object in recent Iranian history: an electricity box of the on which Vida Movahed, widely followed by other activists, stood in 2017 to protest against the compulsory wearing of the hahib. The authorities responded not by changing the law, but by welding metal covers onto the boxes, angled to prevent such a use being made of them. An underground artist group responded with a re-levelling plywood platform. Part of the artists' large and punchy collaborative show. 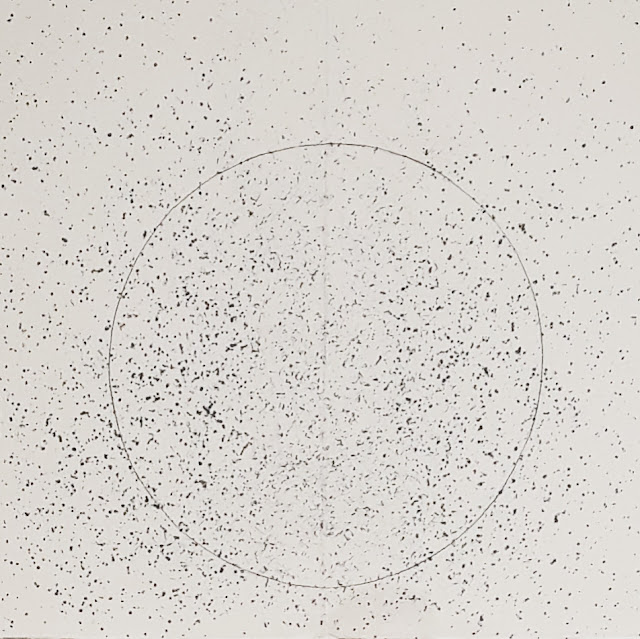 'Drop Drawing' 2008 is a good deal more delicate than the typical effect of bombing. It represents one of several blind or semi-automatic strands of drawings in which, as the catalogue says, the traditional hand-to-eye coordination is replaced by hand-to-mind coordination. The best known are the 'Subway Drawings' in which the movement of the train controls the pen. In the Drop Drawings a circle is cut into a sheet of paper that is repeatedly bombarded from the top of a ladder by a graphite stick.

Shana Moulton at the Zabludowicz_collection to 15 Dec 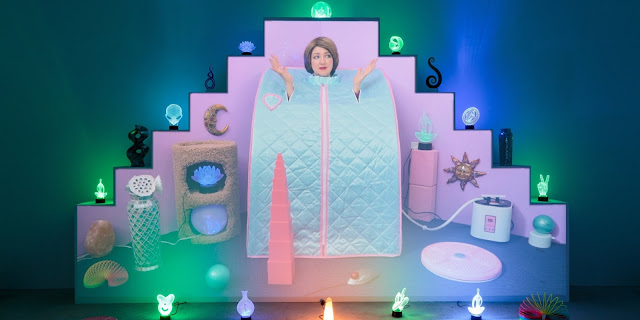 Shana Moulton is in sauna-suit mode here as her alter ego Cynthia finds fresh worries in spectacularly installed new films. It's even better when she performs in addition, as you have the chance to discover on 14 Dec.