The glut of the new shows no sign of abating, so I have updated for some just-seen recommendations even as the only-slightly-older ones roll on… And that without mentioning – unless this counts – the Van Gogh, Michael Landy, Chris Ofili, Matthew Barney and Saatchi Indian exhibitions which are garnering most of the publicity at present. 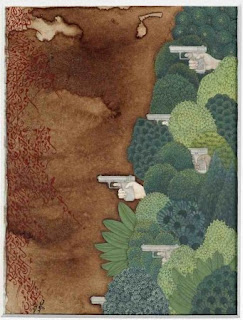 Laurent Delaye visits Pakistan frequently to seek out its somewhat internationally under-exposed artists. His best discovery is Waseem Ahmed, who tackles charged topics – fundamentalism, conflict, tradition in the context of the modern, the status of women – through small paintings which exploit traditional miniatures techniques to counterpoint symbolic subject matter in a very contemporary way. Mullahs, gods, gardens, bullets, burqas, soldiers – and even a soldier wearing a burqa – appear against a virtuoso background effect made from tea stains. The stains turn menstrual or violent and sometimes incorporates abstract calligraphy which refers, says Ahmed, to how meaningless the Koran can become when learned by rote. Sounds heavy? It doesn’t feel so in front of the poised and delicate beauty of the paintings themselves. Bonus: a very informative hand-out. 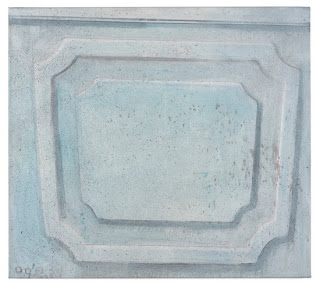 There’s no sign of the brash political pop one associates with contemporary Chinese painting in the everyday lyricism of Zhang Enli. His approach is figurative but far from realist, with a penchant for washed out colours and allowing paint’s drips to hint at time seeping: think Luc Tuymans meets Callum Innes. Even the biggest works are of quiet subjects: a two metre canvas show a circle, leaves or a basin. And I like Zhang best at his quietest, when his fluid contemplations of objects almost disappear into their context: a wall lamp, a relief and a peeled white wall could all stand in for what would otherwise be found where they are hung.

Where to begin? Young conceptualist Damien Roach has drawn on his love of Japan to turn the Foundation into an immersive environment which is part garden (complete with pond), part house (with rooms demarcated by variously coloured semi-transparent screens). We come across both Roach’s work and his choices from the David Roberts Collection, and a roster of eccentric events is scheduled. Roach’s own pieces include video; slide shows; paintings laced with LSD; acoustic foam panels posing as minimalism; the back of a playing card entitled ‘Think of a Card’; and his characteristic collages which transformationally invert elements to make fake reflections - picked up in turn by a collection of twelve vinyl records all entitled ‘Reflections’. A chance, then, to escape from the everyday by reflecting on gently imaginative tweaks of same. Shiiin, in case you wonder, is the onomatopoetic form of absolute silence in Japan. If you’re reduced to it, it’ll be in a good way… 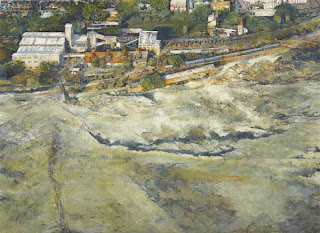 Marlborough may not have a cutting edge image, but they have some excellent artists. Thérèse Oulton, who sounds more exotic than most who come from Shrewsbury, has built her reputation over thirty years through large abstract paintings with a geographical aura. Her new show does it the other way round through 24 small landscapes which use her own photographs from elevated vantage points as the source for unpeopled views. The paintings are vertiginous and yet calm, highly detailed and yet cloudy – and retain a strong feeling for the abstract. That includes abstraction from particular places: they are untitled, and both physically and emotionally distanced. Oulton suggests that may allude to how ‘fewer and fewer people do actually come from, stay on, one small patch of earth anymore’. An interesting comparison is with Carol Rhodes’ aerial views of marginal zones: it would be hard to like those – as I do – and not these. 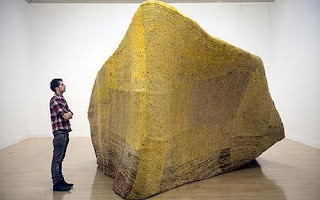 Given the clamorous claims of their blockbusters, it’s easy to overlook the rehangs and smaller shows in the Tates. The Millbank branch currently provides two explorations of scale by artists of contrasting age and fame. David Hockney’s biggest-ever painting is a view of a copse with a sycamore 30 feet high. Actually it’s 50 canvases worked on separately by reference to a computer mosaic of the whole plan – and for good measure the ex-exile techno-enthusiast has made two full scale photographic copies, so you get three full walls of trees. Meanwhile, in the adjoining Art Now room, Andy Holden has made a vast knitted version of a small boulder he stole from the pyramids of Giza when he was a boy (and which he shows himself guiltily trying to return in an accompanying video). Thus a small souvenir of the monumental is made mock-monumental through a laborious process of penance in medium associated with the domestic scale. Holden’s fragment undergoes a continuous metamorphosis, says Lizzie Carey-Thomas in her accompanying text: ‘a stone in the ground, a fragment of an edifice, a relic of a lost civilization, a tourist icon, a stolen souvenir, an object of guilt’. I found both rooms endearing in a slightly silly way… 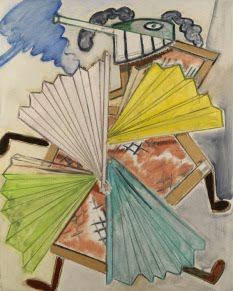 Ansel Krut (with the 'u' as in 'hoot') is a South African who has lived in London – and taught influentially – for getting on thirty years. This is his first outing in glitzier surroundings after showing previously at the excellent but more domestic DomoBaal. Krut’s quirky and spirited inventions play affectionately with any number of modern painting devices and communicate his own enjoyment in making them – indeed, he himself says it is a good sign if he laughs while at work. An energetic spiral form feautures in many of these works, and Krut has intensified his colours in recent years, and is one of those painters with an instantly recognizable palette. And if you’ve ever asked yourself what the personality of a vortex, onion or escalator might be, here are some entertaining possible answers… 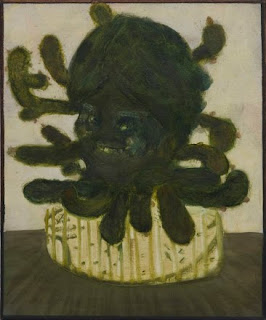 Ryan Mosley (with the ‘o’ as in ‘hot’) is a rising young painter who, like Krut, creates a distinctive world of his own which draws you in to believing in its impossible logic. This, his first big solo show, features a bemusingly amusing range of the human treated like objects (free-floating feet, misplaced faces, a head in a snow shaker) merging with a peculiarly active non-human world (a happy cactus, invasions of pipes, snakes everywhere – indeed, they’re all we can see in the near-abstract ‘A View from a Window’). And they’re helped on their way by titles (‘A Concave Friar’, ‘Blue Bottle Mask’, ‘Snake in Drag’…) which point up the absurdly tangential wit.

The second pop-up (poppy-up?) space for this new gallery is over three floors in a posh shopping arcade opposite the Royal Academy which has fallen on lease-freeing times. That layout facilitates a balanced presentation of Rolph’s works on paper, canvas and – most characteristically – the almost-clear polycarbonate building material triplewall. All teem with energy, colour and references to arrive at what seem to be abstractions of pretty-much everything. Like having, says Rolph, the right crossword but the wrong clues. The newest element are drawings after (not before) the triplewalls, the mix of which includes apparently hairy elements in a sly homage to Guston. I suppose I should admit that Danny is an established favourite of mine, and my interview with him forms part of the show’s documentation – but that doesn’t make it any less good! 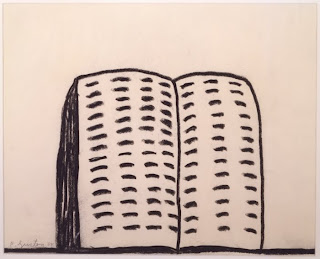 It’s always good to see work by the great and influential Philip Guston (1913-80)- especially when he looks to be in the mix behind Krut, Mosley and Rolph. Guston is hardly under-exposed, but this show provides a fresh angle by forming a retrospective of works on paper: from 50s abstract expressionist studies to fascinating transitional not-quite-figurative mid-60s drawings (from a time when Guston stopped painting) and on to a wide range in his cartoonish late style, including books as buildings, wonderfully simplified hooded figures and clusters of fruit and shoes. And they look great as a whole, with all 24 works restricted to black, white and Guston’s characteristic pinks.

Young video-based artist Oliver Laric makes a striking triple-impression here. First, he plays telling games with originality though a six minute documentary about doctored images using material taken from the internet – from Iranian rocket strikes to celebrity porn to a multiverse of manipulations of Zidane’s world cup final headbut – which illustrates how ‘every lie creates a parallel world – the one in which it is true’. The film itself comes with voice-overs by four commentators who variously interpret the meaning of that content. Second, he draws analogies between the breaking up of graven images in the reformation and the extremely wide variation in the status of images in the internet age by presenting vari-coloured polyurethane versions of a damaged icon from Utrecht Cathedral. Third, he riffs on those themes by curating four films in the basement under the rubric ‘Real Talk’. I loved Aleksandra Domanovic’s version of ‘Annie Hall’, which literalises Woody Allen’s sound track by correlating it against images culled from the seventy million–strong Getty archive – with wildly varying effects as the nature of the match changes. Allow yourself plenty of time here!