How hard can it be, if we’re all related to each other at three removes, to find a chain of connections between some interesting current shows? ‘Not so very hard’ is the answer… 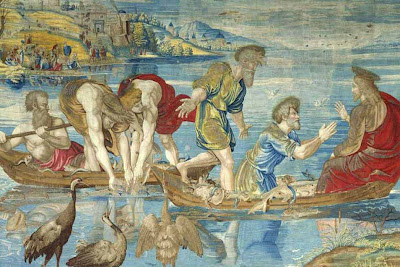 Raphael: Cartoons and Tapestries from the Sistine Chapel

I won’t argue if you claim that the V & A’s room of Raphael cartoons is in the normal run of things London’s outstanding room of art, and for a while it is supplemented – at no charge – by a parallel presentation of the tapestries from the Vatican for which they were made. There are also related prints and some sublime preparatory studies, including an image taken by pressing wet paper onto an ink drawing to test out the image reversal of the woven version. But the tapestries have faded worse than the cartoons and the other points of difference, though of interest, are not in their favour – so it may be just as good to go after this show, when it will be less crowded and you can also see the V & A’s promising-looking exhibition of camera-less photography (from 13 October). Bonus of sorts: the Retable of St George, which takes one of the room’s end walls, shows a range of torture scenes which make contemporary art’s excesses seem pretty tame. 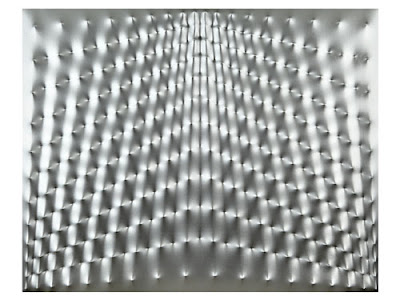 To 27 Oct (not weekends): www.robilantvoena.com

Exhibitions in the classically-styled gallery of Italian dealers Edmondo Di Robilant and Marco Voena have usually been linked to old master sales or the bombastic worlds of Lachapelle and Schnabel, but this is an exemplary survey of the Italian scene 550 years on from Raphael’s heyday. The 1950’s development of Fontana’s holes, then later slashes, as means of puncturing the illusionistic plane is well-demonstrated. There’s an exceptionally lustrous nail-protrusion picture by Castellani, a Fibonacci progression series by Merz which has a witty underlying logic, a couple of De Dominicis’ enigmatic post-conceptually silent faces, and interesting work by others including the less familiar Remo Bianco, Agostino Bonalumi, Dadamaino and Paolo Scheggi. 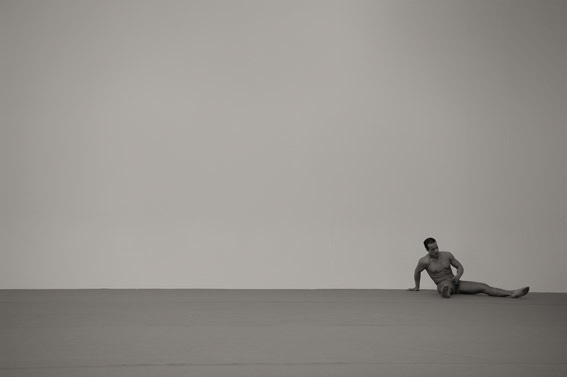 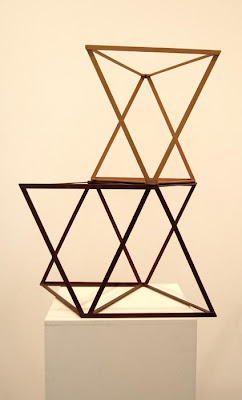 Carlson are in the former Gagosian offices: the Asian-themed Aicon Gallery occupies the former Gagosian gallery space downstairs. But the connection with Pivi is that the among the elegant architecturally-inspired modular minimalism of 1960’s Caro enthusiast Rasheed Araeen is the two-part wood construction ‘Lovers’, which is designed to allow the viewer to arrange it in various different positions. Araeen, who moved to London after training as a civil engineer in Karachi, riffs further on seriality, kineticism and interactivity in the rest of this appealing partial retrospective. It includes the confidently-named ‘Sculpture No 1’ from 1965: four I-beams painted the colour of rust, which leads me to… 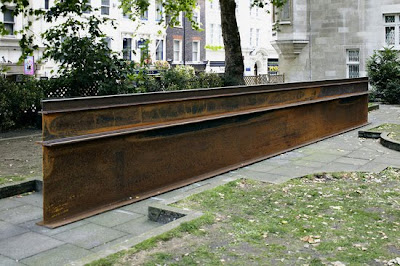 Away from the glitz of the opening of Hauser & Wirth's big new gallery is this one piece show. For his Work No 700 Martin Creed has stacked three progressively slimmer 12 metre steel I-beams on top of each other in the sculpture garden behind Hauser & Wirth’s Piccadilly space. He has applied such incremental ordering to many things from cardboard boxes and cacti to chairs and dogs. The expected rigour and urge to perfection of classic minimalism rubs up against the wear, tear and imperfections of the real world, here represented by a satisfying degree of rust. 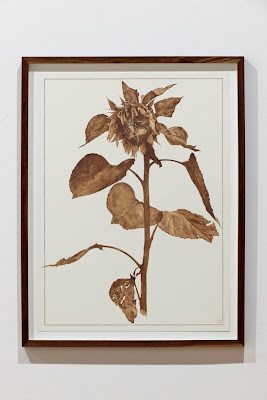 The previously peripatetic Poppy Sebire has a permanent location in an airy former church hall near the Jerwood Space from this, her fourth show, onwards. Malmo-based gallery artist James Aldridge has curated an Anglo-US-Scandinavian group examination of the darker aspects of humanity as filtered through natural processes. I like the circle of double decay with hidden black metal darkness orchestrated by the Swedish artist Roger Andersson. What looks at first like a set of delicate sepia drawings of plants, together with a small and apparently unrelated wooden statue, turns out to be images mad with the rust cleaned from the old tools which Andersson collected in order to carve the statue. A very close examination of the drawings also reveals images insinuated into the detail, such as the goat’s head in the sunflower illustrated above. Beautifully convoluted crepuscularity. 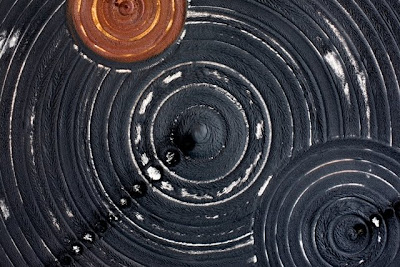 There’s more iron oxide at the latest location of the still-peripatetic enterprise of Vishal Sumarria and Will Lunn. Korean artist Sungfeel Yun operates at the boundary of at and science by returning to the classroom favourite of iron filings with surprisingly persuasive results. He embeds the filings in resin, then uses magnets from the back of the canvas to drag them into swirling fluxes which have a painterly feel front-on and a more sculptural presence from some angles. He then submits selected areas to rusting, so adding to the contrast of elements: solar images using earthy materials, positive and negative forces, metallic strength in a delicate form… 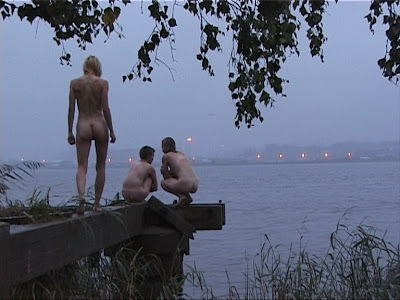 Rust needs moisture, and there’s plenty of that in this extensive retrospective of the Finish film-maker and photographer Elina Brotherus. It concentrates on film, with no fewer than 11 video works on show covering 1998-2010, two of them triptychs - of bathers in natural landscapes and of rained-on vistas – and another the four part Model Studies (2005), which effectively uses the video camera to make life class drawings. Brotherus has often used herself as the model, including in a hundred photo sequence, recently seen at the Bloomberg Space, which documented the effects of her medication. The newest film here combines that strand with the life class through a film of two painters for whom she is the model – except, of course, that they are the primary models, the actors in her video. Brotherus is also particularly good at using the family, and sneaks more humour into her work than may sound likely. Recommended as a user-friendly recovery experience after the crowded Gauguin headline-grabber next door. 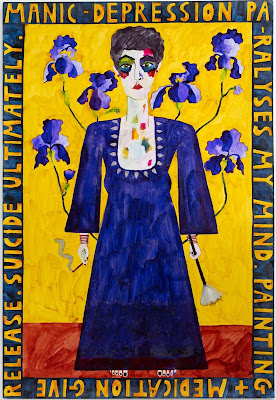 It’s self-portraits all the way in this full-on psychological self-examination by Josephine King, an Anglo-Dutch artist and ceramicist who has lived a turbulent life in several countries. King was diagnosed with bi-polar mania in 1999, and has made eighty ink paintings in the last five years which depict the traumas she could then see it had caused her since 1986. They combine a text border (eg ‘I am locked inside a body alien to me’) with frontal full-length versions of her self. The colour is all high impact (‘colour is my inner world’, says King) but with a definite contrast between plausibly vivid clothing and fauvishly improbable flesh. They’re a bit too knowing to be described as naive, but give off a strong outsider-style charge: Frida Kahlo comes to mind. 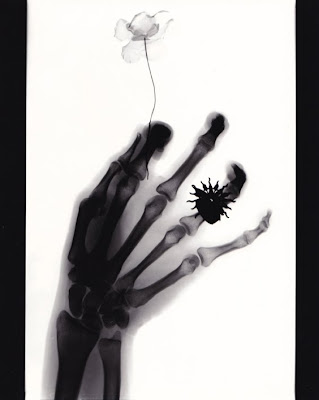 Self-Portraits are rare in the work of the great Mexican photographer Manuel Alvarez Bravo (1902-2002), but there is one in this show – supported by the Mexican Embassy to mark 200 years of independence and also coinciding with the luxurious new Thames & Hudson book 'Manuel Alvarez Bravo: Photopoetry'. The selection as a whole is varied, ranging from a 1930’s poultry shop to deer made from bread, from a nude in vegetation to a skeletal hand, from a plantain to feet in a puddle, all tinged with an apparently effortless surrealism. Steering clear of Bravo’s most-reproduced images, this show make a fresh case for his distinctive combination of tradition and innovation.

TOP TEN OUT OF THE TENT

Frieze itself aside, here's my choice of ten things to do this coming busy week in London 11-17 October:

Any number of openings in Fitzrovia and elsewhere, including James Turrell at Gagosian Brittania St and Marina Abramovich across both Lisson galleries – Tues evening