It's no news that Amsterdam makes for an ideal long weekend, but what about its Art Fair? The recent Art Amsterdam (11-15 May), while not quite small with some 130 galleries, was of manageable size. It focused mainly on the Netherlands, with only 30% of the galleries being from elsewhere (just three of those were London-based - Vegas, Patrick Heide and White Space - but all had interesting main and project stands). In the absence of the usual big fair galleries, there was plenty of chance to find artists new to me: 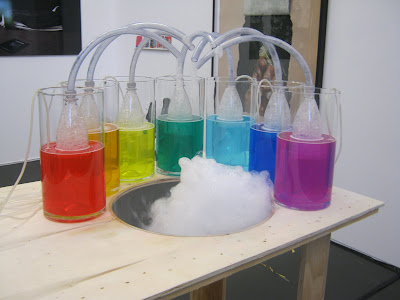 Berlin-based Romanian-born installation artist Dieter Lutsch’s attention-grabbing chemistry set proved decidedly artful: not only did the foam oozing out of colourful liquids make for faecal sculptural shape-shifting, its apparent whiteness was betrayed by the way it came together in a suitably dirty brown in the lower container (sory, just out of shot!), leading one back to spot the separate elements of faint colour which closer inspection revealed were retained in the foam. Thus was the difference between light and substance in the matter of colour neatly skewered. 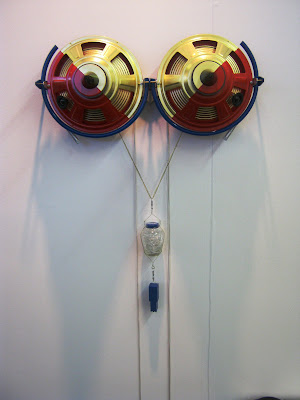 Berlin-based American sound artist and composer Douglas Henderson showed the latest of his active sculptures taking an off-kilter look at superheroes with a gallery which, uniquely I think, focuses on works which use sound. His version of Wonder Woman was dominated by gyrating breasts formed from reversed loudspeakers, emitting the surprisingly bell-like and appropriately pre-cinematic sounds of popcorn rat-tatting against the saucepan lid as it cooked. By happy coincidence, the Stedelik Museum’s new exploration of TV in art included Dara Birnbaum’s seminal video appropriating Wonder Woman’s transformative moments. 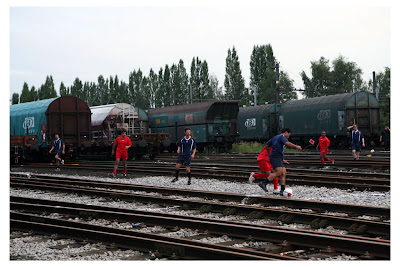 Simon Gush: In the Company Of @ West, The Hague

My favourite video at the Fair, which had few, was by the South African Simon Gush, who had organized and filmed a football match between teams of immigrants on a Belgian railway track. Cue references to the centrality of travel to the players, the contrast between the fluid movement of professional footballers in a global business and the obstacles faced by the mass of would-be-emigrants, and tracks doubling as pitch markings of a sort and a modernist grid. But mostly it was fascinating spectacle, both as a visual setting and for how deftly the players dealt with the constraints and random deflections of their improbable field of action. 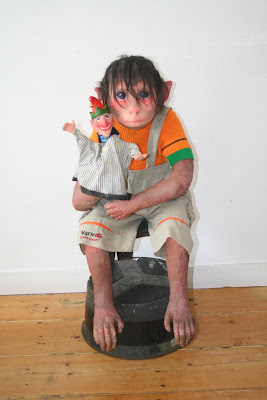 There was a double helping of primate at the Fair: Albert Watson’s well-known photographs of chimpanzees - trying on masks, one holding a gun - and one of Dutch sculptor Mitsy Goenendijk’s disquieting sculptures of clothed monkeys. I found it compelling in a way in which, to be honest, I wasn't sure I wanted to be compelled. Is some backwards development, some de-evolution, being hinted at? 'Mr Punch' was almost as striking as running across Mitsy herself, helping out at the Torch Gallery's interesting Terry Rogers show, where she was working on another monkey stretched across the desk… 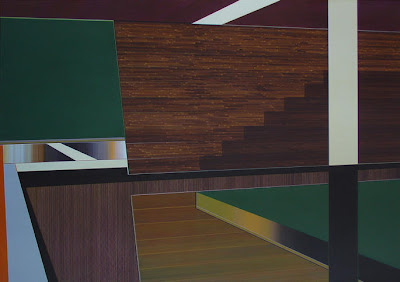 Among the themes one could pick out at the Fair, there was plenty of interface between architecture and art, including in the attractively confused spaces of the young Austrian painter Aurelia Gratzer, which reminded me – by curious coincidence presumably – of Wyndham Lewis. Gratzer studied maths first and art second, and recently won the Central Europe’s Strabag Artaward. Her small canvases illogically combine layered perspectives taken from various photographic sources, and bring nostalgically earthy colouration to the apparently modern. Here, in the visual hurly-burly of competing visions, was a quiet corner which felt right. 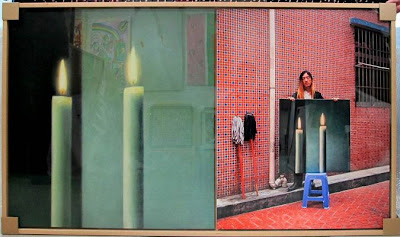 Michael Wolf, a German photographer who has spent much of his career in Asia, has developed several interesting projects, with subjects including toys made in China, Hong Kong high rise living and the press of the Tokyo subway system. The series ‘Real Fake Art’ focuses on the business that has developed in China for copying modern art works, mainly for export to the West. The Chinese copyists were shown with their creations, alongside the actual copy which Wolf had purchased from them, to yield a fresh take on the nature of originality together with the opportunity, rather neatly taken in the mops and candles scenario here, to mine formal similarities between object, surroundings and artist. 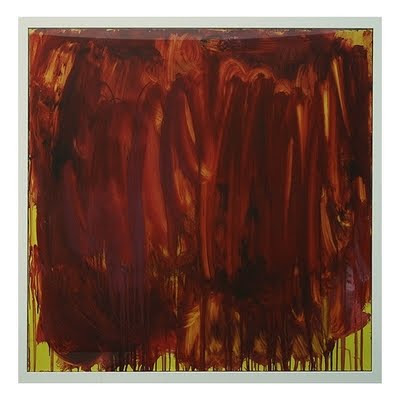 British painter Peter Davis – not to be confused with the differently excellent Peter Davies - has shown his abstract process paintings in London intermittently since the early 1990s, but I hadn’t seen much of him for real. He’s made a lot of work on aluminium car panels, but his latest series uses gloss paint on glass over the top of a coloured board. Little of the effect, I fear, comes over in reproduction but the objects themselves generate an eerily seductive glow which we lured me in to work out the cause, and then to encounter a natural-seeming emotional charge escaping from the rules of their making.


There were strong shows elsewhere in the city – Ryan Gander, Navid Nuur, Maaike Schoorel, Michiel Cuellars, Ryan McGinley, Terry Rodgers… - plus an Aselm Keifer installation in the Rijksmuseum, new displays in the ‘temporary Stedelik’ – both major museums remain in the throws of redevelopment - and also more new artists to be found dotted around the canals. Here are three Dutch artists who appealed: 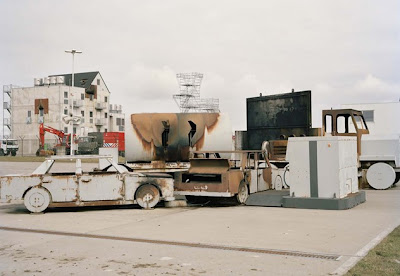 One of the shows at the large and lively FOAM, a public photography institute which publishes the excellent journal of that name, was by the well-regarded New York resident Dana Lixenberg. In ‘Set Amsterdam’ she portrays her native city through landscapes and interiors emptied of people so as to resemble a film set, created by the lives soon due to retake centre stage. Possibly not the most original premise, but one which worked extremely well through the choice of elemental locations – from hostel to garbage incinerator to sex theatre – and the details on which she homed in. 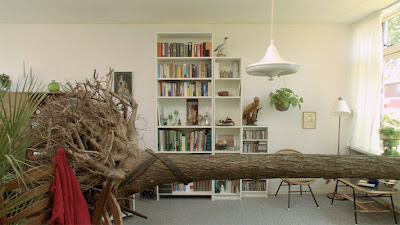 The multimedia artist Roderick Hietbrink neatly combined photographs dealing with how the Chinese cover things in public spaces with a more local invasion of private space. His three channel video installation ‘The Living Room’ is set in the typically Dutch ‘doorzonwoning’ (literally ‘sun-through-house’), in which sunlight is maximised by means of a living room which stretches from the front of the house all the way to the back. The camera dwells a while on the furniture, potted plants, photos and personal possessions before a large oak tree invades in triple view, being dragged through the room to destructive effect. 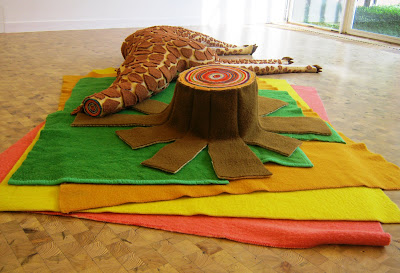 The lively and centrally-placed Belgian cultural institute featured young artists from three galleries, including the Ghent-studying Dutch sculptor Conny Kuilboer, She most typically uses blankets, attracted by their warmth-giving yet constrictive character as well as the texture and available colours. The choice of such a constraining medium plays well with making unlikely connections, and here I liked the outlandish wit in the forcibly rough-cut link between animal and vegetable.
Posted by Paul Carey-Kent at 04:27