Existing galleries continue to expand and new ones to open. Among the heavyweights  Sadie Coles has four shows at the moment,  and Pace moves into Burlington House and  David Zwirner into Grafton Street in October. And almost all of this month's ten are recent expansions or creations - including a whole clutch in Deptford ... 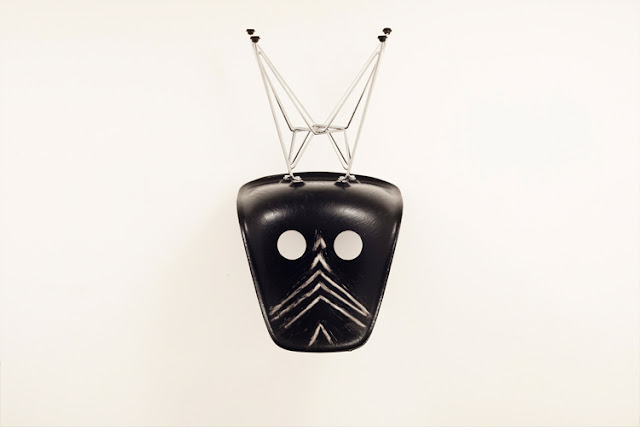 Beers Lambert hasn’t moved so far west as some, but – like everyone except Wilkinson – has left Vyner Steet. Cool and sardonic Scandinavian pair Jørgen Craig Lello & Tobias Arnell open the new space with what looks like an elegant set of modernist-styled works, but is actually full of conflict and deception.  A grey canvas proves more of a fight than a collaboration between black and white;  Richard Dawkins’ evolutionary message is distorted by Enron CEO Jeffrey Skilling; a Charles Eames chair becomes an atavistic mask… The well-considered focus is on how we understand – or misunderstand - the past, and how those versions of the past live on in the present.


There are times when I groan ‘enough skulls!’, but this modern reworking of black humoured momento mori motifs isn’t one of them. The highlights include artist-curator-gallerist James Hopkins’ sculptural mirror anamorphosis, which turns a jaw-bone-like shape into a full skull when seen reflected in a beer can; Darren Coffield’s upside-down skull paintings; and mordant Dane Peter Callesen’s intricate paper cut-out of a skeleton looking back at the man he used to be, presented alongside a film of the artist in a cemetery, reading out his own drily absurd eulogy (‘how many nights we sat up late talking…’).  Mat Collishaw, Hugh Mendes and John Stark are among those adding to the gloomy entertainment. 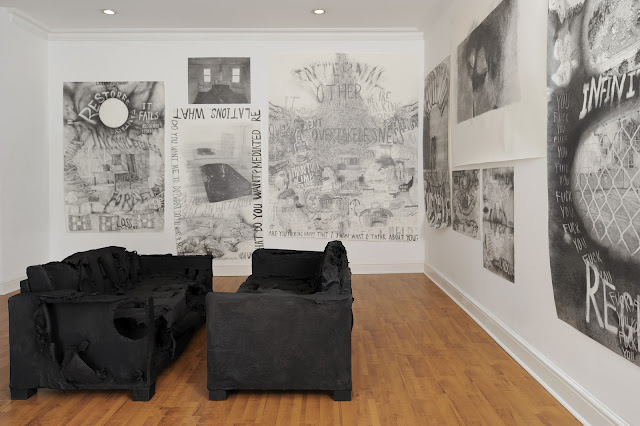 After lying low a while in Heddon Street, Milan’s biggest contemporary gallery has expanded into what looks an impressive two room space at street level even before  you find the six subterranean rooms. They contain the first substantial British showing of work from on-trend LA artist Kaari Upson’s ‘Larry Project’, in which she picks over the personal papers and largely burnt-out remains of a house inhabited my a seedy man she never knew, but whose identity she seeks to hijack. Ritualised drawings, durational video performances and dramatic installations rendered from the house in charred wood,  latex, mud and silicone all pile on the intense analysis of herself through him.


To 14 July: www.wilsonwilliamsgallery.com
The ‘elephant in the room’ at WW’s new space is tackled head on in the collage of that name, in which a 50s housewife gets to grips with a phallus almost as outrageously-sized as those which do duty as lighthouses elsewhere. The brazen invention continues as we find ourselves looking up a skirt made of hair while swimming goggles bat their eyelashes and a zimmer frame prepares to party. More subtly, the acting modes of wholesome advertising and pornography collapse into each other as we struggle to read a lack of innocence into stuck-on porn star eyes. Laugh as we might, Hennessy hits the target of how sexual commodification gets in everywhere.


To 14 July then by appointment, performance evening of Thurs 19 July
Lucy Newman Cleeve’s excellent notes do more justice than I can to the subversive conceptual play behind James Brooks’ formally elegant work, a sort of imageless and textless critique of how we use images and text. Thus are newspapers obliterated by their own ink as if in a surfeit of news, stories layered into geometries which emphasise the trammeling formats they must follow; and disparate lives unified by the stripping of 26 biographies’ dust jackets, and the show's press release turned into a work. There’s sound too, and Phil Spector’s becomes a wall of discord when 21 of his tracks are played at once… 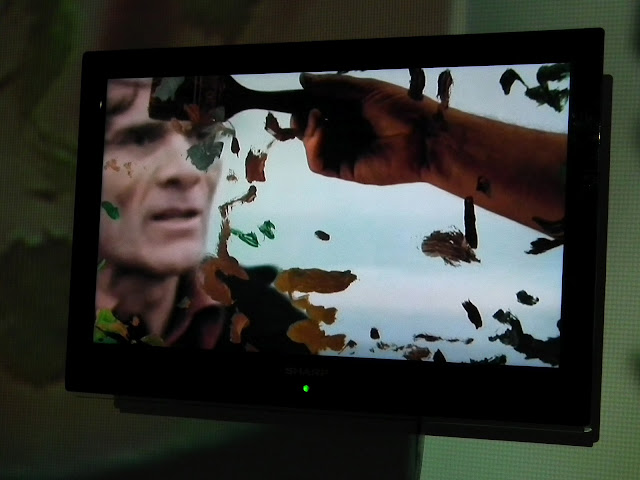 Deptford has reached critical mass as an art destination just six minutes from  with the opening of several new project spaces a few flicks of paint from the railway station. Excellent artists feature in Lubomirov-Easton and Enclave Projects’ group shows, and, at news of the world, Angel Vergara, ’s representative at the last Venice Biennale, has an impactful first  exhibition: his unique way of painting onto video footage matches the excess of the contemporary image stream with equally arbitrary brushstrokes trying to follow the movement. Here the method is applied to Pasolini’s denunciation of the Italian media just as we see Berlusconi (before his fall from what was hardly grace) attacked with the bizarrely appropriate weapon of a statuette of the Milano Dome.


Danny Rolph has exploited two rich seams to bring together 14 works which make telling use of basic means, pencil and paper. First, access to Spruth Magers’s collection, yielding for example a feisty George Condo and an angry Marcel van Eeden; second, commissions from artists he admires, such as a delicately sensuous Chris Ofili and a poetically conceptual Anna Barribal. And I loved the exacting instabilities of Nadine Fecht, who  made me feel that her intricate geometries were still in process: no sooner did I get a grip on one area than a neighbouring zone swam away…  her being German, my mind then leaped absurdly to the Euro crisis…

Professor Thomas Grunfeld of the famous Künstakademie Düsseldorf, who showed his own work at the gallery last year, makes a selection of eight former pupils. His influence can be witnessed especially in Russlan Daskalov’s punchily comical use of computerised ellipses. ‘Why all nude women?’: I asked –‘So that I enjoy making them’, came the attractively straightforward reply.  Others seem to resist their master’s influence pretty successfully, including Anna Mirbach: her frescos, heavier than her, fuse industrial abstraction with crystalline and organic semi-figuration which emerges through a process of carving into polystyrene to make the negative from which their pigmented concrete forms are cast.

On the Move @ The Gazelli Arthouse, 39 Dover St - Central


There’s dark life at the heart of Gazelli’s four-artist third show following its move to a permanent space. Charlotte Becket makes angular crushes of discarded black plastic which turn out on closer engagement to be expanding somewhat creepily into your space, with a sound whihc could be of crystalline growth. Science serves artistic flow in Anthony Hall’s liquid sculptures:  a ‘Perpetual Puddle Vortex’ makes oil disappear into the middle of a plinth, only to reappear thanks to interior motor and marbles; and ‘Continual Slow Drip’ effects a globular take on  Charles Ray’s 1987 ‘Ink Line’ by having a mixture of olive oil and black paint blink its way down a fishing line. Hyo Myoung Kim and Giovanni Ozzola also make their moves.


This is a slippery show to get hold of, but that’s au point, as all the artists show under alter egos. Joe Scanlan, for example, lures you into the suspiciously attractive cubist wood collages of Donelle Woolford, only to pull the rug out with the absurdly inflated claims she makes for them (including, at the opening, in answering the questions of a similar-looking woman with whom she’d swapped roles by the end of the interview). The gallery also gets disguised: a version of it is being painted onto it, and the controls for the lift – to imaginary floors –  turn out to alter the lighting unpredictably. In the dark? You may be… but it’s fun.

Images courtesy of the relevant artists and galleries + Andy Keate (Brooks)
Posted by Paul Carey-Kent at 21:54