You could argue that the main point of going to a gallery is to see the installation, as a combination of art fairs and the Internet might give you a fair idea of the works in the show, but not of how it all fits together. It’s good to report, then, that plenty of thought and effort goes into how shows are presented.  Of course, my own argument is arguably undermined by my attempting to show the installations here, but let's consider some current tactics. We start with the biggest non-institutional solo shows in , both in venues I’m guessing that few have been to as yet, but all should be encouraged to visit! 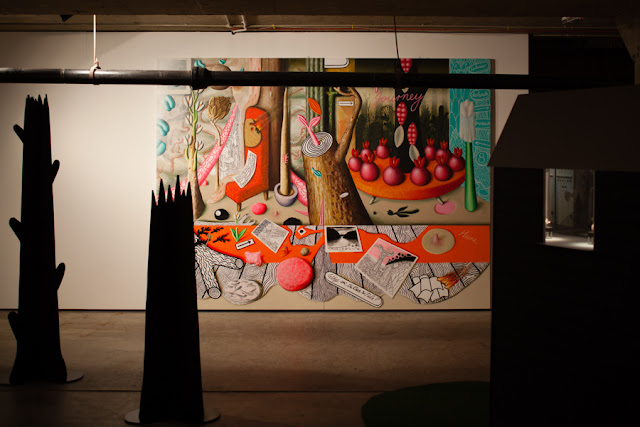 Make a surprise impact: In the unexpectedly vast space (450 sq m) which used to house Coutts Banking’s computers, five artists with adjoining studios have taken on the somewhat heroic volunteer task of mounting shows - and achieved a triumph of bold, varied and atmospheric installation, building several environments for the darkly uplifting work of Robin Mason.  He feeds a childhood journey across Germany, Böcklin’s ‘Isle of the Dead’, and Grünewald’s ‘Isenheim Alterpiece’ into etchings, sculptures, display sheds, video and above all paintings (Carroll Dunham meets Magritte would be my style summary) of great intensity. The artist makes an annual pilgrimage to : you only have to make it to  by 7 June for The Deepest Darkness by Robin Mason at Block 336. 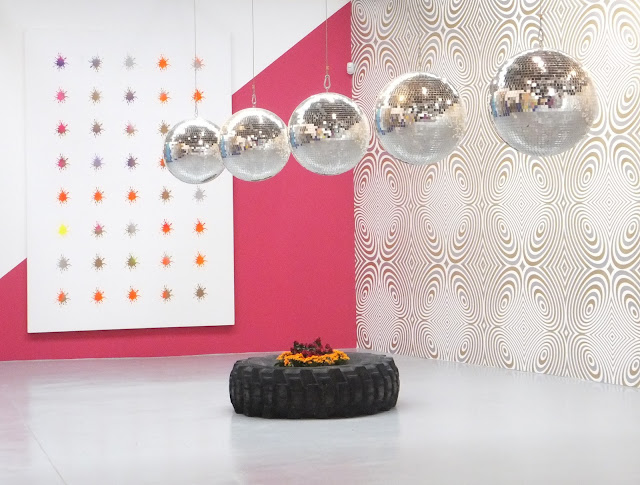 The art or not-art total environment shuffle: Collectors Frank Cohen and Nicolai Frahm have taken over a 150 sq m former dairy, starting with the biggest UK show by the multi-faceted Swiss veteran John Armleder. He delights in hybridising genres, and has space for plenty here: a bar with colourful stools; a dozen glitterballs; shelves piled with video, lava lights, soft toys and more; paintings both mechanically patterned and chance-driven; wallpaper-like installations; floral displays; mirrors with guitar; heaps of light tubes, art books, sand, coal... all is sucked into his anti-hierarchical, boundary-challenging interface of art, decor, design and the stuff of life - a sort of B movie version of the familiar in which everything seems to be in a set designed for something else. John M Armleder: Quicksand at the Dairy Art Centre to 1 Sept. 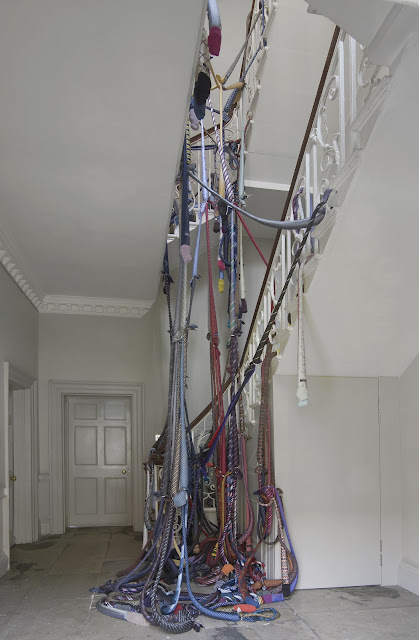 Use the architecture: Mhairi Vari hangs her 'LOL Memory' spectacularly down 40 feet of stairwell in Domo Baal's home-like gallery space. The combination of stuffed neckties and men’s socks looks rather sadly phallic, but in fact – like most of Vari’s work – it also carries a scientific sub-text, being a model of primitive computer circuitry which required such intricate internal wiring it was  best produced by the Little Old Ladies who give the technique its acronymic title - and pick up, perhaps, on that deflation of the male. In the three artist conversation Flood/Ní Bhriain/Vari at domobaal to 18 May. 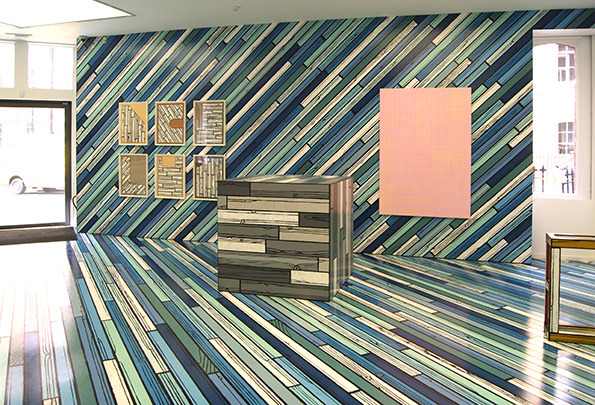 Let the work infest the whole space: the tactic suits Richard Woods as his faux wood-grains  etc already relate closely to design. More is certainly more in the total room in which souped-up mock Tudor runs brilliant riot. The elements include witty 'radiator sculptures' (designed to cover the heating elements) and prints based on off-cuts and left-overs which could have come from the rest of the installation. Richard Woods: DIY to 1 June at Alan Cristea. 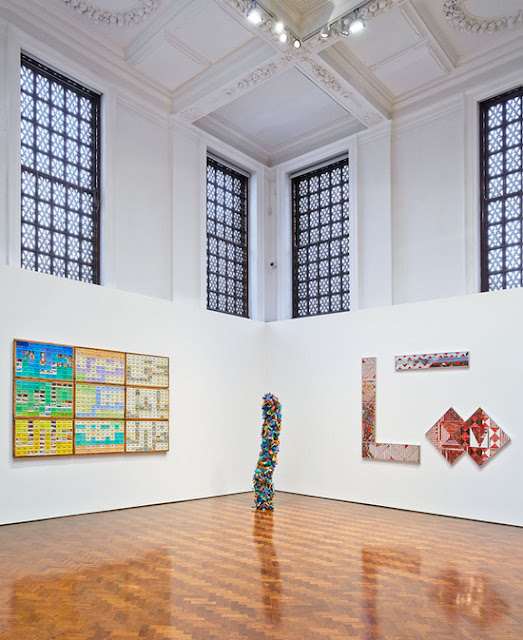 Hide the Work: easy enough to do if it's small and designed to go beneath the radar (Fernanda Gomes at Alison Jacques has some beautiful examples of that just now) - but Bettina Pousttchi's transnational works at Hauser & Wirth are much the biggest  pieces in the show, and yet could be missed. ‘Piccadilly Windows’ use photographs of structural elements from timber-frame houses in her native Germany, rework  them into a Middle East style then apply the  resulting motifs to the nine windows of the main gallery. They combine particularly well with Monir Farmanfarmaian’s combinations of traditional Islamic mirror mosaics and reverse glass painting in Trade Routes to 27 July at Hauser & Wirth, Piccadilly. 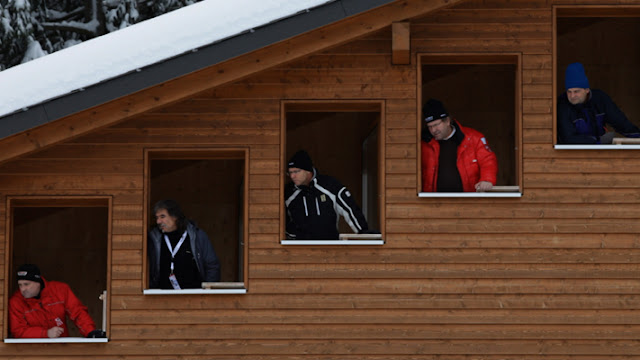 Echo the themes: as in a system of wooden cabins complete with temporary seating, such as you’d find if you attended the world's biggest ski jump, the atmosphere of which is caught by Melanie Manchot’s series of films which concentrate on such matters as artificial snow machines, the skiers' preparations  and  a view of the judges looking out of their cabin without seeing what they're judging - all without any direct action in a psychological exploration which can also act as a parallel for the act of artistic creation. Melanie Manchot: LEAP After The Great Ecstasy to 1 June at  Carslaw St Lukes. 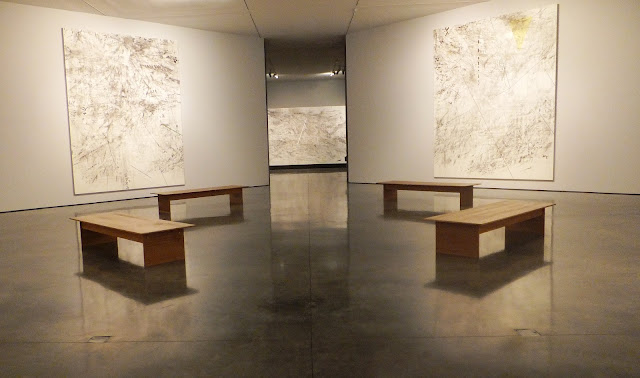 Spend Big Bucks. I say that, but given what it must have cost to put Antony Gormley's huge structures into the Bermondsey White Cube recently,  it probably seemed cheap to commission David Adjaye to custom-design the environment to hold  Julie Mehretu's  overlays of precisely-inked architectural elements, charcoal smears and coloured acrylic geometrics. Adjaye's structures help the monumental paintings to tower above and around the spectator like skyscrapers.  Julie Mehretu: Liminal Squared to 7 July at White Cube Bermondsey. That said, the show of thre young US-based phtographers Lucas Blalock, Matthew Boooth and Erin Shirreff is as good a reason to visit.

Make the best of what you have. Charlie Dutton doesn’t have much space, but - together with participant painter and curator Kate Lyddon - fits one work effectively in a cupboard, plays a video in a back room, and spins a head as if to take in the clutch of cheerfully subversive paintings by Aly Helyer, and  Cecilia Bonilla’s hypnotic video. Her 'Horseriding' takes aural control with extreme simplicity:  a succession of pictures from women's magazines are made to shudder up and down as a soundtrack of clip clopping provides an explanation without  preventing a more sexual one coming to the fore. We sell pornography here to 25 May at Charlie Dutton. What's more.Lyddon is curatorially involved in the equally good show at the Fold Gallery, which is covered in straw... 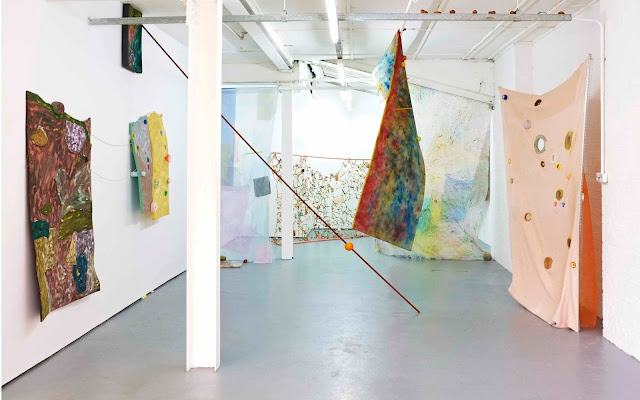 Work on site : then there you have it, the most natural of installations. I like Samara Scott’s florid-pastel world which wrests pleasure from entropy, but has she successfully carved out a zone beyond the echoes of Karla Black? I’m not yet wholly sure, but the dozen sculptures tenuously-constructed out of such diverse materials as latticed silicon glue, sponges, latex, plastic bottles and peanuts in a former timber merchant's feel as if they were made for the space. Which they were… Samara Scott: Poems at Almanac to 2 June (photo Gary Didsbury)